If you are a vegan and planning a night out on the town or you want to host a cocktail night at home that vegans will attend, it is worth knowing in advance which cocktails are fine to consume and which should be avoided. As we explain in our article on spirits, most distilled drinks are vegan friendly unless they have had some non-vegan ingredient (such as honey) added to them. Other alcoholic drinks, such as beer or wine, may be rendered non-vegan by the production processes (for instance, using isinglass during fining). Increasingly, many are vegan but it certainly pays to check, and there are plenty of vegan Champagnes too if your party, or cocktail, needs some fizz.

With cocktails, whether the end product is fit for vegan consumption will depend on the ingredients added. In this article, we’ll first give a brief description of the best (well known) cocktails that are definitely vegan friendly. Then we’ll outline a few of the cocktails that should generally be avoided for those on a plant-based diet (sorry, fans of the White Russian!) and we’ll give a few hints about making vegan-friendly versions of them.

Before we get stuck into the booze, we must remind you to please drink responsibly and only drink at all if you are aged 18 or older in the UK (or whatever the legal restriction is where you reside).

Here we’ll go through some of the most well-known cocktails that are vegan (if made using the conventional recipes at least!). Note that occasionally some brands of the ingredients mentioned might include some non-vegan ingredients or processes, so always check the label. But, in general, those we mention in this section are vegan friendly.

One of the stronger cocktails around, but one that is vegan friendly, as long as the cola you choose is vegan (note that the regular colas of both Coca-Cola and Pepsi are vegan). It is also easy to prepare: simply pour all the ingredients bar the cola into a cocktail shaker along with four to six cracked ice cubes, add the sugar and give it a good shake. Strain the well-shaken contents over a few cracked ice cubes in a highball glass, top up with a splash of cola and add a wedge of lime or lemon. And, locate the Paracetamol for the next day!

Born in Havana, Cuba, the Mojito is a taste sensation in which the combination of the sugar sweetness, the bitterness of the lime juice and the fragrant mint flavours enhance the rum to create a perfect summer cocktail. And, there are no issues with non-vegan ingredients (as long as the sugar wasn’t produced using bone char, which is relatively rare these days anyway).

Few cocktails are particularly complicated to make, but the Mojito is as simple as almost any: just put the mint leaves, lime juice and sugar/sugar cane juice in the glass, muddle them to release the mint oils, add the ice and rum and top up with soda water. Add a couple of fresh mint leaves to decorate.

Created in the iconic Raffles Hotel in Singapore sometime in the early 20th century, the Singapore Sling oozes sophistication and exoticism (well, unless you get served it in a dive bar in Cleethorpes). The ingredients can vary from bar to bar, with some recipes calling for fresh pineapple juice, fresh lime juice, Maraschino liqueur, Cointreau and Bénédictine (or some permutation of those). Either way, it’s another simple cocktail to make: pour the various ingredients over a cracked-ice-filled shaker, shake it for all you’re worth and strain the contents into a highball glass.

Depending on the specific recipe you use, there are one or two ingredients you might want to look out for from a vegan perspective. Though good quality grenadine is made from pomegranate juice, some cheaper options might use various other fruits and then add some food colouring to make it look right. As we discuss elsewhere on the site, some E numbers are not vegan, so look out for that and E120 in particular (made from crushed beetles!). Also, some brands of Maraschino liqueur contain honey (which is not vegan). Other than that, you should be fine though.

Although the Cosmo has been around for nigh on a century, it gained a boost in popularity in modern (ish!) times thanks to Sarah Jessica Parker’s character in Sex and the City who had something of a penchant for them. They became intrinsically linked with New York City and nights on the town with groups of women.

Easy to make, with few ingredients, Cosmopolitans also provide healthy profit margins for bar owners! Simply shake the ingredients over cracked ice and strain the liquid into a chilled Martini glass and garnish with a twist of orange or lemon peel. Then make for the dancefloor! 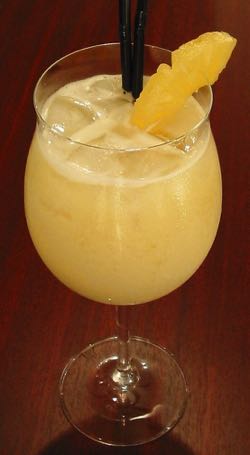 For those dreaming of hanging out on a Caribbean beach (or those lucky enough to actually be on a Caribbean beach), the Piña Colada has a refreshing and tropical feel and is eminently quaffable. With no non-vegan ingredients in sight, this is perfectly fine for vegans, but just watch out for pineapple juice that has been fortified with (potentially non-vegan) vitamins. Though freshly squeezed or blended juice straight from the fruit is always the best option anyway.

If you want to celebrate St Patrick’s Day in style, why not bling up your pint of the black stuff? To create this smooth and moreish beverage, simply fill half your glass of choice with Guinness, let it settle, then – very slowly – top it up with your chosen sparkling wine and the job’s a good un. Note that Guinness is 100% vegan but not all sparkling wines are – check out our article on Champagne for the lowdown.

Non-Vegan Cocktails… And How to Make Them Vegan

As we explain in our article on Worcestershire Sauce, the original and best-known brand of the sauce, Lea & Perrins, is not vegan. But, thankfully, the similarly tasting Henderson’s Relish is vegan (as are other brands available from TheVeganKind Supermarket, and so we can do a straight swap and we’re good to go. Note that Tabasco Pepper Sauce is vegan friendly so there are no issues there. Many people view the Bloody Mary as the perfect hair of the dog option. Though others might prefer water or flat lemonade and as much sleep as they can get to ease through a hangover.

A word of caution here, some brands of vermouth contain casein from milk or even gelatine, which technically renders the drink non-vegan. Famous brands, such as Noilly Prat and Carlano, fall foul of such additions. As such, we would recommend Dolin vermouth, which is fine for vegans at the time of writing.

This is a simple, sophisticated cocktail that can be adapted to taste by varying the quantity of vermouth added. Best when shaken (not stirred!), add the cracked ice, gin and vermouth to a shaker, do your best impression of Tom Cruise in the classic 1988 film, Cocktail, and strain the liquid into a chilled Martini glass.

Thought to have originated in the 19th century, the Boston Sour is similar to the Peruvian cocktail the Pisco Sour (which is made with the local brandy, pisco). You can make this without the egg white, but then it lacks the distinctive foam. Instead, we recommend adding a couple of teaspoons of aquafaba which – if you shake vigorously enough – should foam up nicely. This applies to any number of variations on the sour, all of which traditionally use egg whites.

If you are a fan of The Big Lebowkski you will no doubt get the urge to pour yourself a White Russian every time the Dude does. Alas, as we outline in our article on Kahlúa and Tia Maria, Kahlúa Original and various other Kahlúa products are not suitable for those on a vegan diet. And, neither is cream, of course. But, thankfully, you can simply replace the Kahlúa with Tia Maria (which is vegan friendly) and use either (unsweetened) coconut cream or soy cream in place of the dairy cream. Really whatever non-dairy cream you prefer, though we would opt for something as neutral as possible, with oat-based cream our personal favourite for this classic cocktail. Would the Dude abide? We hope so.

We have only really scratched the surface of the many vegan cocktails available for people to create and enjoy (responsibly!). But hopefully we have shown that most of the ingredients used to make many of the classics (and plenty more besides) are already vegan. And though there are a few things to look out for (such as rogue non-vegan ingredients in the likes of vermouth), it tends to be relatively easy to figure out if a cocktail you are considering could be unsuitable for someone on a plant-based diet. For instance, anything that looks or sounds creamy is likely to contain some dairy-based ingredient, while if you see the bartender reach for the honey, stop them in their tracks and suggest agave nectar instead!