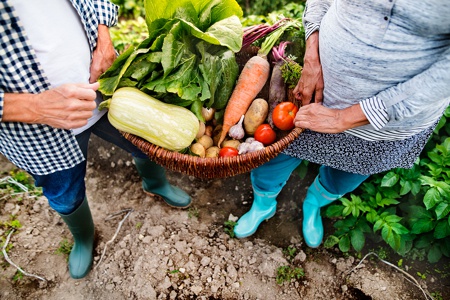 If you have read many of the articles on our site or indeed done much research into food production it will have become apparent that being vegan is not easy. There are so many additives and production processes that can stop food being vegan friendly.

Whether it’s in the L-cysteine (sometimes made from duck feathers) added to bread or the bone char (burned animal bones) used to refine sugar, there are plenty of obstacles constructed in front of someone trying to follow a vegan diet. There are just so many things you didn’t know weren’t vegan!

The Problem with Organic Farming

At least fruit and vegetables are always vegan though… right? Well, that depends on your viewpoint. If you think that growing vegetables in animal manure or fertilisers made from crushed up animal remains makes them non-vegan, than buying organic veg might not be the best way to maintain your vegan credentials. You can read more about that in our Is Organic Food Vegan? article.

The problem is, if you shun organic food, you are opting instead for food grown using inorganic agrochemical fertilisers and pesticides, which have various implications for the environment. Many vegans cite the environmental benefits of veganism as a key tenet of their choice to go vegan, so this clearly throws up something of a quandary, not least the potential deaths of insects and other bugs.

With these conflicting issues in mind, many people are now turning towards vegan organic food, or its adopted portmanteau, “veganic” growing. The basic concept of veganic growing is that it uses neither agrochemicals nor products derived from animals.

In his 1986 book entitled Veganic Gardening, Kenneth Dalziel O’Brien rejects the use of herbicides, pesticides and other agrochemicals, as well as the use of manure, bone meal, blood meal and other animal-derived fertilisers and products. It explains how the use of straw and vegetable wastes can maintain and promote the fertility of the soil.

The Vegan Organic Network, who promote a vegan organic approach to growing food in the UK, defines veganic growing as:

Any system of cultivation that avoids artificial chemicals and sprays, livestock manures and animal remains from slaughter houses.

We will now explain in more detail about veganics and also look at options for those seeking to eat veganic food but who do not have the space available to grow their own. But first, we will run through a basic guide to making your own vegan vegetable patch.

How to Make a Vegan Vegetable Patch 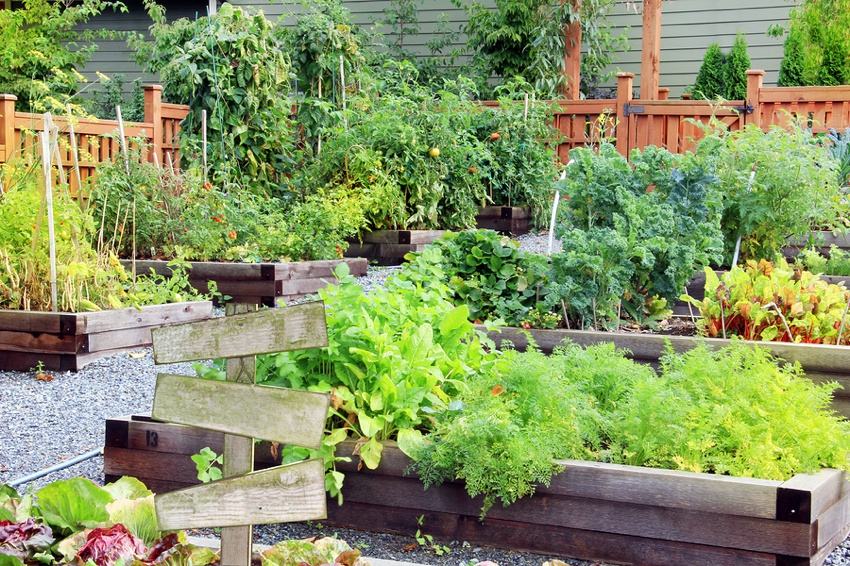 If you want to grow veganic fruit and veg, you will have to start with two things: space and time. This space might be in your garden, at an allotment or perhaps in the garden of someone else who would be happy to let you create a vegetable patch in return for some of the produce.

As for time – like with most things, the more you invest, the better the rewards. So, once those two things are available to you, here are the steps you need to follow to grow veganic.

Planning your vegan vegetable plot, preparing the soiling and planting your potential future crops are the three main stages of growing your own. Here we explain a little more about each stage of this highly rewarding process.

Planning the location and size of your vegetable patch in advance is essential. There is no point positioning it in an area of the garden that receives little direct sunlight. To grow well, vegetables will usually require at least five hours of sunlight per day. Avoiding overhanging trees and bushes is advisable too, as these can block out a lot of light.

Bushes and shrubs can also harbour slugs who like to hide away before pouncing (albeit rather slowly!) on your juicy lettuce leaves when you’re looking the other way. The bigger the space between other plants and your veg patch, the less likely it is that the slugs will want to make the journey. Also, make sure the patch is flat (to avoid nutrient run-off) and not too exposed to the wind.

Deciding on the right size veg patch for you is not always straightforward. You might have little real choice based on the space you have available. But if space is not a constraint it’s important to strike a balance: on the one hand, don’t make the patch too small to yield enough produce, but don’t make it too big to manage effectively.

Bigger is not always better when it comes to growing fruit and veg, as weeds will find it easier to spread in a bigger bed, so unless you have the time to keep on top of a large area, maybe curb your ambitions a little. Letting a vegetable patch become overgrown will inevitably lead to frustration so starting small and expanding later is the way to go.

The size of the patch you might need will vary depending on how much produce you desire, but a patch measuring 2m by 3m is a good starting point for many and that, if well managed, can produce an abundance of fresh veg. If you don’t have any garden space yourself, then applying for an allotment is certainly an option, though some have long waiting lists.

The next stage of the process is critical: preparing the bed ahead of planting. Once you have decided on the position and size of your vegetable patch, there are a couple more options to consider, namely whether to create an in-ground bed or a raised bed. There are advantages and disadvantages to each, and doing a bit of research by reading some gardening books can give you the necessary insight on that front.

Whatever you decide, it is important to take a keen look at the soil you have available in your garden allotment. For instance, clay-rich soils are usually fertile, but they can become heavy and soggy and hence difficult to work with. In contrast, soils that are sandier will be easier to dig through, but will lack nutrients. Either way, digging down at least 20cm into the soil and removing any stones and weeds (including roots) is essential. Then it is a matter of adding some vegan-friendly fertiliser.

There are an increasing number of vegan-friendly fertilisers on the market which are available from good garden centres. These are sometimes made from alfalfa (a nitrogen-rich leguminous plant) or kelp. If it doesn’t specifically state it is vegan friendly, it probably isn’t. But making your own compost from vegetable peelings, grass and plant cuttings is not too difficult, and this ensures you know exactly what your food is grown in.

Using so-called “green manure” is also a very good vegan-friendly option. This involves growing fast-growing plants, such as cowpea or clover, and then digging the plants through the soil to ensure the nutrients stay in the bed. Many veganic growers also employ the uses of mulches, rotting bark or leaves, to help keep the soil fertile.

For many, choosing what to plant in a new vegetable patch can be a fun process. Crop rotation is an important way to maintain the longevity of a veg patch, but also combination planting – whereby you plant specific combinations of vegetables – can be an effective way to increase yields and even to reduce pests. For instance, tomatoes act as a repellent to caterpillars that feast on cabbage leaves, and most pests really don’t like the smell of onions!

One of the key things to remember when deciding what to plant where is to give each plant enough space to thrive. Overcrowding a patch leads to low yields… and it looks a bit messy too.

Fruit & Vegetables to Grow in the UK 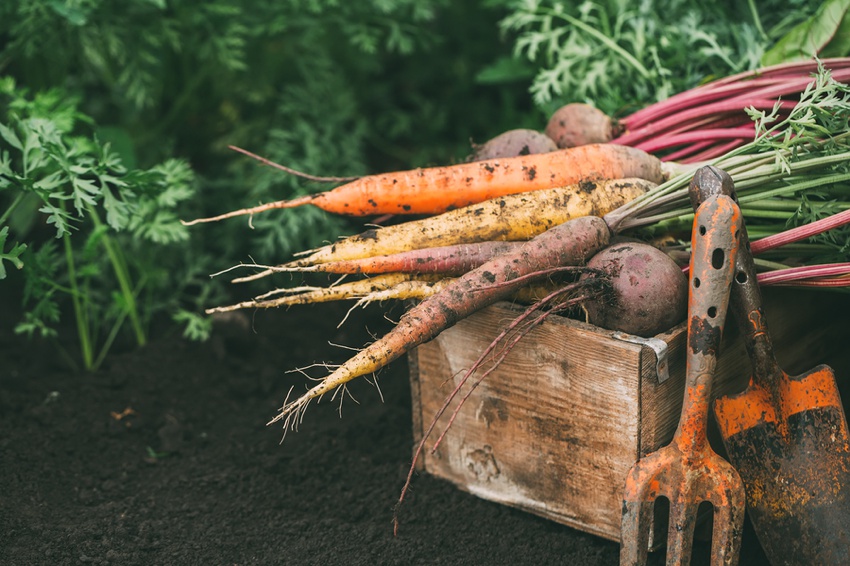 Though climatic conditions vary to a reasonable extent based on your specific geographical location within the United Kingdom, there are plenty of options when it comes to growing veganic produce. Here are some of the easiest – and tastiest – fruits and vegetables that you should be fine to grow on these shores.

Those listed below do not need to be sown under glass and do not require the use of a propagator before planting. The planting and harvesting months will vary based on the weather conditions you have experienced.

There are also various herbs, fruit and veg that might be better suited to growing in a greenhouse or in your home, but if that’s your plan it is worth consulting a decent book or two on the subject.

What is Veganic Growing?

As mentioned earlier veganic growing is a way of producing food without the use of any products derived from animals. It also incorporates many of the principles of organic farming in eschewing the use of potentially harmful agrochemicals. Examples of things veganic growing will NOT use include:

In the place of animal-derived products, veganics encourages the use of green manures and plant-based fertilisers (as mentioned above), the promotion of biodiversity and crop rotation to help maximise crop yields and minimise pests. They also encourage the use – where possible – of renewable energy sources in place of fossil fuels, obtaining supplies as locally as possible and selling products as locally as possible, while restricting hedge trimming, tree felling and ditch clearance at certain times of the year to protect wildlife.

The Veganic Organic Network states its commitment to “peace and justice for people, animals and the environment in a sustainable balance”. Few people who follow or have aspirations to follow a vegan lifestyle could argue with these sentiments.

Where to Buy Veganic Food 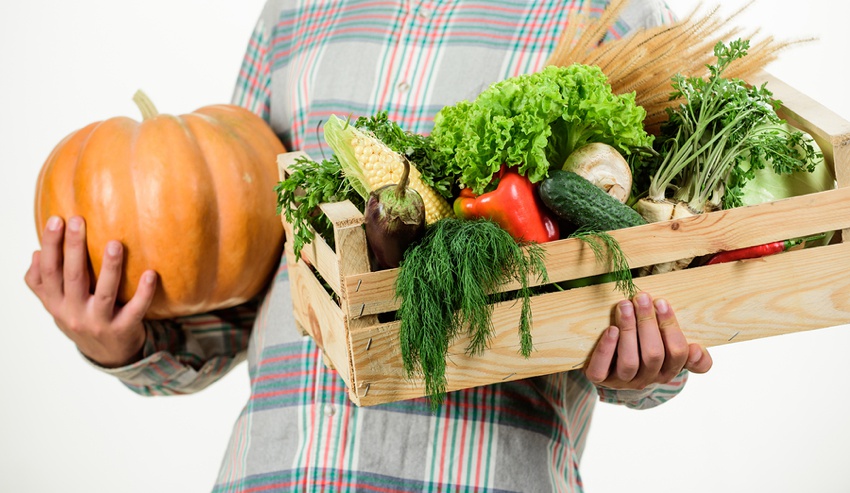 Some people would like to consume veganic food but don’t have the skills, time, space or inclination to grow their own produce. In this case, one option would be to buy your produce from a veganic farmer, either through a box scheme, by visiting them directly or perhaps at a farmers’ market.

The Vegan Organic Network has a list of veganic growers in the UK and Ireland. If there is one near you, it could be worth visiting them or contacting them with a view to purchasing veganic produce.