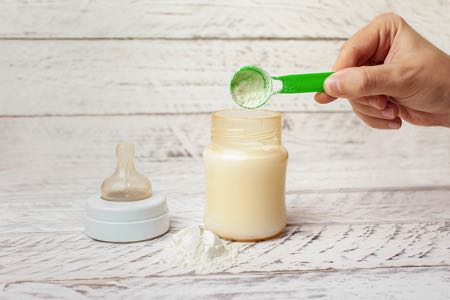 The consensus among health and nutrition specialists is that the best food a baby can have is breast milk. Nature has developed a fantastic way of providing all the nutrients a baby needs and better still (for the baby, if not always for the mum!) it comes with a very convenient delivery mechanism. But, sometimes, for various reasons, it may not be possible for a baby to be given breast milk. In which case, baby formula is the next best thing. But given that the vast majority of baby formula products contain cow’s milk and/or other animal-derived ingredients, this could lead to a dilemma for parents who want their babies to be vegan.

We discuss the ethical arguments about whether children should be vegan in another article, so we’ll leave that to one side. In this article, we will instead focus on the very limited options parents have if they want to give their babies vegan-friendly formula. We’ll also take a look at how easy it is for your child to be vegan once they have started eating solid foods. To start things off, let’s take a look at the official advice on what a baby or young child needs in terms of nutrition.

Note that it is very important to follow official medical advice about what you feed your baby. Information here does not constitute advice and you should always discuss your baby’s health and dietary requirements with a qualified medical professional.

There is strong encouragement from the NHS, the World Health Organisation, nutritional organisations and charities involved with childcare and parenting (such as the National Childbirth Trust (NCT)) for parents to breastfeed their babies.

There is also lots of information, guidance and support for those who are struggling with breastfeeding for whatever reason (for instance, if your baby is tongue-tied) and the NCT have a support line to offer help with breastfeeding or bottle feeding babies.

Some of the benefits the NHS suggests about breastfeeding include:

From a vegan point of view, breast milk is also vegan. Although it comes from an animal (a human), the difference between breast milk and that from a cow is that (unless something strange is afoot) the woman providing the breast milk is giving her full consent for her milk to be consumed. Cows can’t do that. And, almost certainly wouldn’t if they could.

There are sometimes reasons that mean it is not possible or not desirable to breastfeed a baby, however. In which case, the next best thing is formula milk. While formula milk does not provide all the benefits gleaned from breast milk, there is no reason a baby fed exclusively on formula milk cannot live a long and healthy life. Though mothers tend to be encouraged towards breastfeeding, there are medical reasons that make it advisable not to breastfeed (such as when the mother is on strong medication or undergoing radiotherapy or has some kind of infectious disease).

Of course, some people would argue that if you bottle feed your baby you are better able to understand how much milk they are getting. Indeed many mothers express their breast milk and bottle feed for that reason.

The latest Government Dietary Requirements (last published in 2016) give an overview of the recommended daily intake of various nutrients. They don’t cover babies under one year of age (as they assume they will primarily be on breastmilk or formula, as is recommended). But here are the recommendations for babies aged one and children aged two to three years old.

Obviously, it’s very hard to ascertain the precise nutritional values imparted by breastmilk and there’s an element of generality about it. For instance, babies are weighed regularly to check they are gaining enough weight, with alarm bells ringing about their nutritional intake if they are not.

It can be easier to work out the quantities of various nutrients if using formula but then some of the other benefits are not present. In general, the consensus is that breastmilk should be given to babies if possible.

Most conventional formula milk is made from cow’s milk or proteins derived from cow’s milk. But that isn’t the only ingredient that makes it non-vegan. Fish oils are often included (to provide omega-3 fatty acids to the baby), while animal-derived vitamin D is also added.

According to a First Steps Nutrition Trust guide to infant milks, published in 2017 for the NHS, there are no vegan-friendly infant milks (baby formula) available in the UK market, “since even those that do not contain a source of animal protein do all contain vitamin D sourced from sheep’s wool.” They also do not recommend giving soy-based infant formula to babies unless under medical supervision (for instance it has been prescribed after the diagnosis of a cow’s milk allergy).

There are a couple of brands of vegan-friendly baby formula that are available from outside of the UK, such as Prémiriz, an infant milk made from rice protein by French firm, Prémibio. But the company itself says this is not recommended for babies under six months of age. And trying to get hold of it could prove a costly endeavour, especially since the UK has left the European Union.

Is It Possible or Practicable for a Baby to Be Vegan?

As we have stated many times on this site, the widely accepted definition of veganism (coined by the Vegan Society) includes a caveat. It states:

Veganism is a philosophy and way of living which seeks to exclude – as far as is possible and practicable – all forms of exploitation of, and cruelty to, animals for food, clothing or any other purpose.

This being so, there are plenty of things that fall within the “as far as is possible and practicable” get-out clause. If someone had vaccines and medicines that might have been developed using animals (for instance, they include egg proteins or they have been tested on animals), it would not stop them from being vegan. We would argue that providing the best nutritional start for your baby would also fall under this clause in the definition of veganism.

You might think it is practicable to import a supply of vegan-friendly baby formula from France or another country. But we think the vegan gods (Mother Nature?) would forgive you if your baby ingested a little cow’s milk protein and fish oil for a few months. After all, most vegans eat plenty of animal products until they decide to go vegan at whatever age they happen to be. 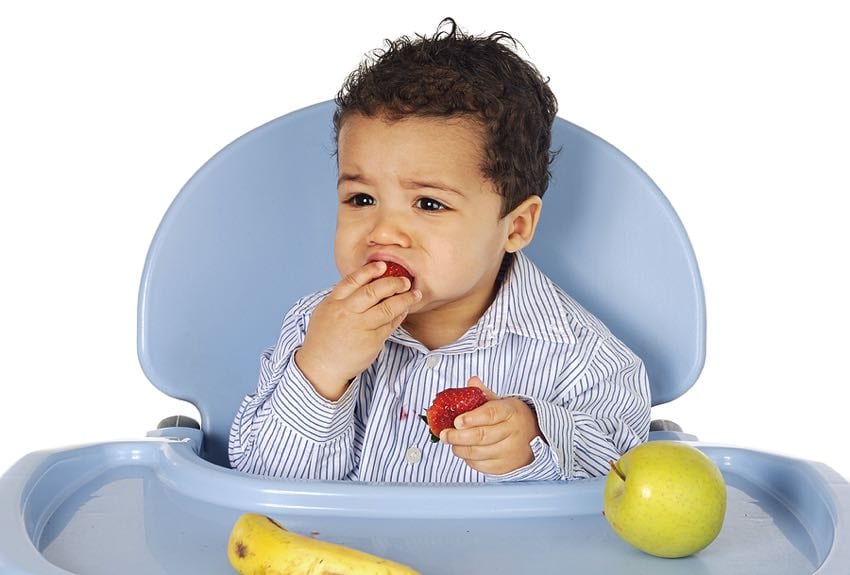 Things get a lot easier from a vegan perspective when babies begin eating solid (though usually mashed up or pureed) food. Many of the foods that are recommended for babies when they are transitioning from milk/formula to solid foods are naturally vegan. For instance, the NHS Start4Life advice site states that good foods to try first include “blended, mashed, or soft cooked sticks of parsnip, broccoli, potato, yam, sweet potato, carrot, apple or pear”.

As with older children and indeed adults, it is important to give babies foods that cover a range of food groups. This becomes more important as they reduce and eventually end their milk/formula intake.

There are lots of ideas for weaning recipes on the Start4Life YouTube channel. There is also a lot of useful guidance about planning a balanced vegan or vegetarian diet for children available from the British Nutrition Foundation, though a lot of this will be more applicable to older children.

Most vegan-friendly baby foods are very easy to make yourself (and often include simply blitzing up some fruit and veg). But there are some nutritious and convenient pouches of baby food available, including many of the flavours of Ella’s Kitchen (which are available from theVeganKind Supermarket, among many others). Those coming to veganism for environmental reasons may decide against such pouches but there is no denying their convenience.

As your child gets older, they will be able to eat a wider range of foods. If you are determined to raise your child on a vegan diet, following various guidance from the NHS, the British Dietetic Association’s Healthy eating for children: Food Fact Sheet and other trusted bodies about what your child needs is advisable. Also, see our article on veganism and children for links to various other information sources.

It is important to ensure your child obtains all the required nutrients, including key vitamins and minerals that can sometimes be difficult to obtain on a vegan diet, such as calcium and iron. It is possible for your child to obtain all they need (perhaps with the help of some vegan supplements, especially during the winter months for vitamin D) but careful planning will be required from the parents. If in doubt, be sure to discuss any concerns with a medical professional or a dietician that specialises in child nutrition.

When it comes to feeding babies, there is a strong consensus that the breast is best. That is not to say that your baby will be massively disadvantaged if you are not able to breastfeed for whatever reason or that you should feel undue pressure to do so. But it’s important to discuss your baby’s nutritional requirements with a medical professional, especially if you have any concerns or you could do with some support or guidance.

With regards baby formula, at the time of writing, there are no 100% vegan options available in the UK that are suitable for babies younger than six months old. And, one of the only vegan products we found for older babies would have to be imported from France. If you need to give your baby formula but you also want to bring them up as a vegan, we would say that giving them formula that contains cow’s milk protein (or other animal products) would fit under the “possible and practicable” section of the definition of veganism. In other words, their health and development are more important than them avoiding all animal products.

When your baby begins to eat real food, it will become a lot easier to feed them exclusively within the confines of a vegan diet. But this will require a good deal of planning and especially when it comes to their intake of certain micronutrients, such as (but not limited to) calcium and vitamin D, the latter being a particular concern in the winter months when they are not exposed to much sunlight (though in truth, that often applies to non-vegans too).