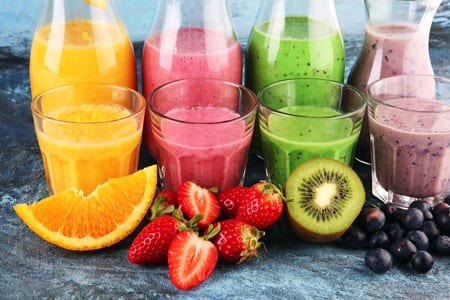 Smoothies are a quick and easy way to consume fruit and veg and they can be very tasty too. They are often nutritious and are an excellent way to get a good whack of your “five a day” with minimum hassle. They are also great to consume either before or after exercise, especially if you include a vegan protein powder and, as if that wasn’t already enough, smoothies are also a superb way to use up fruit or veg that might be a little past its best before end up being wasted.

Some people might think of smoothies as being expensive but this latter point means they are also perfect for using up reduced price items in the supermarket. If you see a bag of browning bananas or a punnet of just-turning-mushy raspberries for 10p and think, “Wow, that’s cheap but I’m not sure I really want to eat it,” get it in your trolley – they’ll be perfect for smoothies. What’s more, frozen and tinned fruit and veg are also excellent for smoothies, so they certainly aren’t something you should think of as being expensive. Whilst you can easily pay £5 or more for a smoothie in a shop or bar, you can knock one up for yourself in minutes for less than 50p.

If you do intend to make your own smoothies then ensuring they are vegan couldn’t be easier. We’ll look at the main things to look out for later in this piece but in short, the only things you really need to avoid are dairy products (and possibly honey). The simplest, and often best drinks, are just a mix of fruit and veg and, in order to get the desired consistency you can use water, ice, fruit juice or non-dairy milk. In other words, just don’t use dairy milk, yoghurt or ice cream and the chances are you’ll have yourself a mighty fine vegan smoothie.

If you buy your smoothie at a bar, restaurant, shop, kiosk or anywhere else, the chances are the menu will make it clear whether or not your pick is vegan. Smoothies are often considered to be a health food, although in truth they aren’t necessarily always that healthy. But what that does mean is that many that sell them are often slightly ahead of the game when it comes to an awareness of vegan needs and providing proper menu information and/or labelling.

If it is unclear whether or not your desired smoothie is vegan, then looking out for dairy in the ingredients is a great first step. The best course of action, and the easiest, is just to ask the vendor. 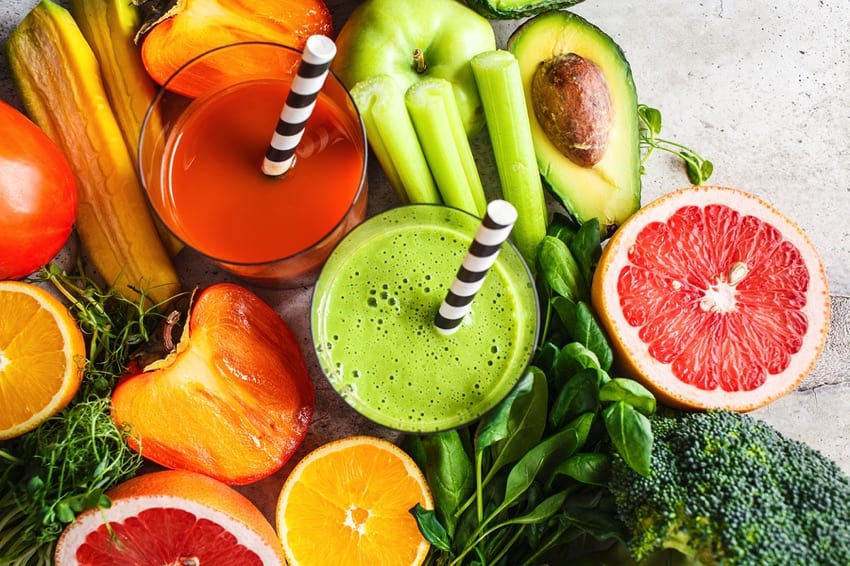 You can add pretty much anything you like to a smoothie – and believe me, we’ve seen some pretty weird and wonderful combinations – but many of the best vegan staples are also fairly core additions to many smoothies. Take a look at some of our favourites below and get creative – you can mix and match any of these as you see fit, although obviously some work better together than others.

Note that this is also just a few of our notions of the “best” but really, just about any fruit, veg, nut, seed or vegan milk substitute can be used, whilst tofu, lentils and other legumes are great sources of vegan protein that can also be thrown in there.

You can combine virtually any of these ingredients to create your own unique drink and smoothies can be a great way to get nutrients into your diet. As well as tailoring your smoothie to create one which you love the taste and texture of, you can also create one that delivers vitamins or minerals that you might otherwise struggle with.

For example, if you don’t like Brazil nuts but know what a brilliant source of vegan selenium they are, just chuck a couple in and you’ll get all the goodness and probably not even notice their taste.

Smoothies are also a great way to incorporate extra herbs and spices into your diet and as well as offering great flavours, pound for pound, these are often the most nutrient-dense foods around.

As well as essential vitamins and minerals, herbs and spices often also contain high levels of other antioxidants and phytochemicals. Frequently there is insufficient research to categorically prove the health benefits of these but there is lots of anecdotal evidence and lots of scientific research to suggest they might help.

Moreover, as we can be almost certain they are not harmful there is no reason not to take them. Almost every herb or spice can offer you something, with, for example, chilli thought to possibly raise the metabolism, ginger and mint said to aid digestion, turmeric considered anti-inflammatory and linked with preventing cancer and Alzheimer’s, and cinnamon another potential anti-inflammatory that also boosts sweetness and may help regulate blood sugar.

Our Number One Vegan Smoothie

A smoothie can be made in any number of ways but our preferred method is to use a blender. It is possible to make a smoothie by hand, although the stick blender, NutriBullet (essentially a popular brand of blender primarily designed for smoothies), or food processor can also be used.

As we keep reiterating, you can really put anything you want into your vegan smoothie, so get creative. We quite like the BBC Good Food Guide’s overview as a starting point for beginners (ignore the non-vegan ingredients, of course!) but if you want a simple, tasty and nutritious option, here’s our go-to vegan smoothie:

This is a smoothie: there isn’t really a method! It’s also a really flexible recipe so you can sort of do what you want but essentially put all the ingredients in a blender and blitz away. You can remove the core and pips from the apple if you want but there is no need. Equally you can use a different form of non-dairy milk but we like the texture and flavour of oat milk.

Use more milk if you want a thinner smoothie, or add a splash of water. When it comes to blending the ingredients, pulsing the blender works best, whilst you might need to scrape down the sides and/or give it a bit of a shake to make sure everything gets blitzed up nice and evenly.

We’ve already looked at the chief issue that could make any smoothie unsuitable for those on a plant-based diet. Dairy is far and away the most likely culprit, be it in some form of yoghurt, ice-cream, milk or even cottage cheese! However, life on Is it Vegan? patrol is never easy and there are other things to watch out for as well.

Another potential area of concern is about what has been used to sweeten the smoothie. To our taste most smoothies don’t need any additional sweetness but depending on what ingredients you use, you may feel something extra is needed just to boost the sugar levels, enhance flavour or balance any acidity.

There are loads of ways of doing this and most are vegan. Not all sugar is vegan friendly but lots is, whilst fruit juice can also be used, with orange and apple just two options that typically provide plenty of sweetness. The raw fruit itself will provide natural sugars but these are more concentrated in juice, whilst some fruits, such as grapes, are especially high in fructose.

Dried fruits, including raisins, apricots, figs or dates are also great vegan picks, as are agave nectar, maple syrup, stevia and lucuma syrup. So, what might be the problem then? Well, the obvious non-vegan sweetener is honey, which exploits bees and isn’t vegan. This is definitely something that finds its way into some commercially bought smoothies so always check the label if your favourite drink isn’t labelled as vegan, or ask whoever made it.

The final thing to be aware of is the inclusion of any potentially non-vegan additives, such as colourings or preservatives. Typically smoothies are marketed as being healthy and natural but that doesn’t mean they always are. Once again, the normal rules apply: if it isn’t labelled as suitable for vegans, check the ingredients (our guide to Vegan E Numbers should help) and lastly, if in doubt, contact the manufacturer or retailer.

What Is a Smoothie? 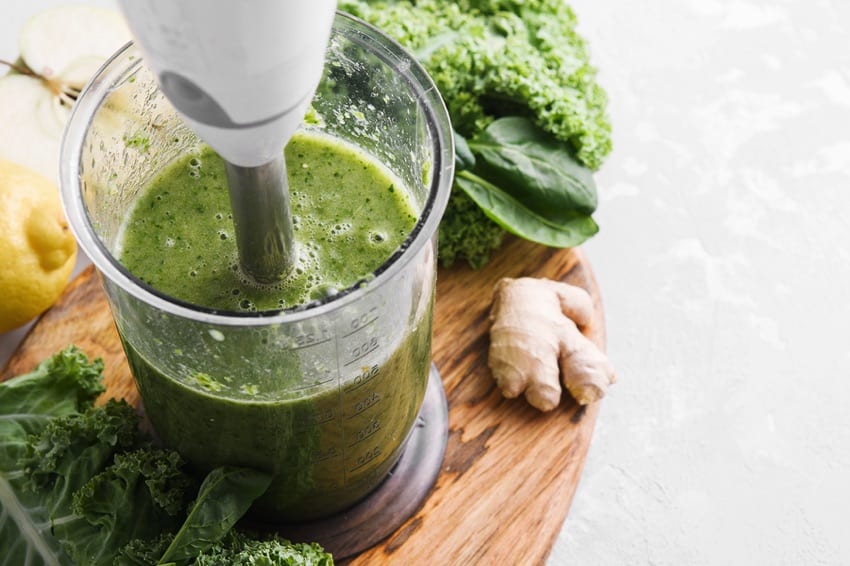 If you’ve made it this far without knowing what a smoothie is then we admire your dedication. However, whilst it may seem an obvious question, it is very easy to be confused by smoothies, green smoothies, milkshakes, juices, frozen smoothies, lassis and any number of related beverages. So, what makes a smoothie a smoothie, rather than, say, a juice?

There are no 100% fixed definitions when it comes to all of these things. If you want to call a mix of ice-cream and fruit a smoothie, you can. The police won’t come knocking. But for the sake of clarity, let us look at some of the drinks listed above and explain how they differ in our eyes (and based on the widely accepted definitions of each drink).

The main ingredients in a smoothie are fruit and/or vegetables. These are often added whole so you are getting the full nutritional benefit of the plant. Smoothies are typically made with a larger number of ingredients than some of the other beverages mentioned here, though this does not have to be the case.

As we have explained, smoothies may contain a mix of fruits, vegetables, flavourings, liquid bases and extras such as nuts or seeds. Smoothies are, as the name suggests, blended until smooth and though the texture and viscosity can vary quite markedly, they are often reasonably thick.

A green smoothie is a type of smoothie that, unsurprisingly, is usually green. They are typically healthier than standard smoothies and more veg-focussed, in particular leafy green vegetables, such as kale, spinach and broccoli. Such ingredients might be expected to make up about 50% of the drink and fortifying extras, such as wheatgrass, spirulina or maca powder are also often added.

A juice separates the pulp, flesh and skin of the fruit or veg from the juice which means that most of the fibre and some of the overall nutritional value is lost. Because of this they are almost always less viscous than smoothies. It also means they tend to be sweeter and overall less healthy than smoothies.

Milkshakes often have a similar thickness to smoothies but whilst the latter contains a high proportion of fruit or vegetable, the former is more, as the name suggests, milk-based. At the heart of a milkshake is milk or ice-cream, normally – but not necessarily – using dairy milk. Milkshakes also generally have fewer ingredients and flavours, with the dairy base normally being used to carry one main flavour, for example chocolate.

Whilst milkshakes may evoke a 1950s diner, in modern parlance, for many a “shake” means a protein shake or other sort of pre- or post-workout fuel for the body. These usually come in powder form and there are lots of excellent vegan protein powders that can be combined with other ingredients, such as oats, berries, chia seeds and so on to create a super-charged smoothie.