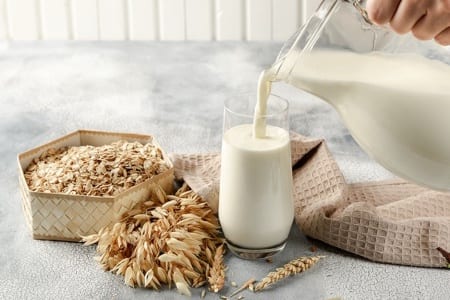 Here we look at a whole host of nutrients to help those following a plant-based diet understand more about vegan nutrition. Vitamin B12 is one of the micronutrients that vegans are most concerned about and so here we have a full and in-depth look at what it is, why we need it, whether B12 supplements are a good idea, how much we need to consume, and, of course, what the best vegan sources of vitamin B12 are.

Vegan Sources of Vitamin B12

We’ll start at the end of that long list of B12-based info by considering what vegans should be eating in order to get all the vitamin B12 they need. The body cannot make this micronutrient and so it is essential to eat the right foods. Unfortunately for vegetarians and even more unfortunately for vegans, there are very few non-animal foods that naturally contain vitamin B12.

For those that eat meat and animal products, some fish, for example tuna, and some types of meat, especially liver, provide high levels of B12. Milk, cheese and eggs are further sources but, clearly, none of these are of any use to those following a vegan diet.

There are a very limited number of foods that vegans can eat that do naturally contain B12 though. In addition to that, many popular vegan-friendly products are fortified with B12. The table below shows the best vegan sources of vitamin B12. Note that percentage of daily intake is based on the British Nutrition Foundation’s Reference Nutrient Intakes (RNIs) for adults.

Top Vegan Sources of Vitamin B12

Obviously that’s quite a small selection of foods and seaweed is not widely eaten in the UK, though it is increasingly available in supermarkets. Nori is the type of seaweed used to roll sushi though so adding some vegan sushi to your diet is one obvious way to increase your B12 intake. Nori is also the safest seaweed when it comes to vegan iodine too, although wakame in moderation is also unlikely to be problematic.

Note that as well as Marmite and other similar yeast extracts, some other yeast products also contain B12. As for the other great vegan options for this vitamin, it should be noted that not all breakfast cereals are vegan. Also, please be aware that not all vegan milk substitutes or cereals are fortified with vitamin B12 and that where it is present the levels will vary from product to product.

Do Vegans Need to Take B12 Supplements? 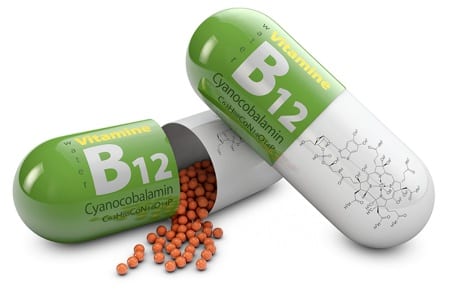 As we will discuss later, humans need only very small amounts of B12 in order to be healthy. The National Diet and Nutrition Survey shows that overall in the UK most people are getting enough in their diet. Of course, the fact that the whole population is doing well tells us little about whether vegans need more B12 and even less about whether you as an individual should consider supplements.

Because vitamin B12 is predominantly found in animal products, it is certainly something that vegans should think about. In its guidance on B vitamins, the NHS states that due to the foods it is found in, “vegans may not get enough of it”. Vitmain B12 deficiency does occur in the UK and some vegans are certainly affected by this. However, deficiency is more common in people who have problems absorbing B12 due to their gastric juices. Most vegans with normal-functioning digestion and absorption are able to get enough vitamin B12 in their diet via the foods in the table above.

Whether or not you as an individual will need such supplements depends on your own personal diet. As we discuss in our feature on vegan multivitamins & supplements, such tablets are not always as effective as the bare numbers on their label suggest. This is due to the complex way our metabolisms work and the interactions between the various nutrients.

If possible we would recommend trying to get nutrients from food, even if it is fortified. With seaweed such a good source of this vitamin adding just a little of that to your diet a few times a week could be a good idea. In conjunction with popular vegan milks, this should enable most followers of a plant-based diet to get all the vitamin B12 they need. Of course, all that said, for those that don’t eat any of the vegan food sources of B12 we have listed, a supplement could be a good option.

How Much Vitamin B12 Do I Need?

As we have alluded to, humans only need a very small amount of vitamin B12. Current advice in the UK is that most adults (in fact those aged from 15 upwards) need just 1.5μg per day. Babies need around a third of those levels, with children aged 11-14 needing 1.2μg. Pregnant women do not require increased levels of B12, although those breastfeeding should aim for an extra 0.5μg.

To give you some idea of how little that is, an eyelash weighs around 80μg and the recommended amount of fibre per day in micrograms is 30 million! Therefore 1.5μg really is a small amount, with most people in the UK consuming over 4μg of vitamin B12 per day, though there are no reliable statistics for how much B12 the average vegan gets.

What Is Vitamin B12?

If you’ve got this far without knowing – and perhaps caring – what vitamin B12 is, you may well not want to know. On the other hand, for those that do like a few facts about this essential nutrient, here are 11 (just because we like to go the extra mile here at VeganFriendly.org.uk!).

Vitamin B12 is essential for the body to use folic acid, to obtain energy from food, to make red blood cells and also to maintain a healthy nervous system. It helps the nervous system synthesise myelin, whilst it is vital in bone marrow where it helps the rapidly dividing cells to form blood cells.

As with many nutrients, in some ways the easiest way to understand why we need vitamin B12 is to look at what happens in the case of deficiency. Anaemia is often the first sign of B12 deficiency, with a sufferer producing irregular and insufficient red blood cells that cannot function properly. This leads to tiredness and a lack of energy, as well as pale skin and a range of other issues too.

If left untreated such issues, including problems with balance and reflexes, can become permanent. Muscle weakness, depression and confusion, cognitive issues, mouth ulcers and a painful tongue, as well as problems with vision can also result, either due to the B12-anaemia or simply due to low levels of B12.

What About Folate (Vitamin B9)? 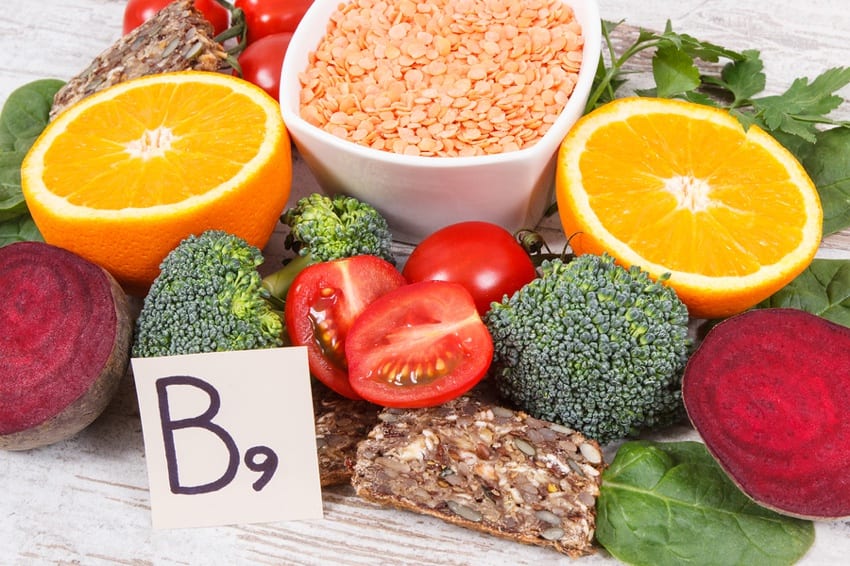 Folate, otherwise known as vitamin B9, often gets discussed alongside vitamin B12 because the two work together and serve many of the same functions, such as assisting the nervous system. As said above, B12 is required by the body to use folic acid.

Deficiency in either of these micronutrients leads to very similar symptoms and these can be hard to tell apart. Indeed, high levels of folic acid, either through the diet or via supplements, can mask a vitamin B12 deficiency. This is because the folate treats the B12-anaemia but not the actual deficiency and other related health problems.

There are many excellent vegan sources of B9, including vegan powerhouses, such as chickpeas, broccoli, okra, dried fruits and nuts, as well as potatoes, bread and some fortified products. Vegans are quite unlikely to have issued with folate but we mention it principally because of its role in potentially masking a B12 issue.