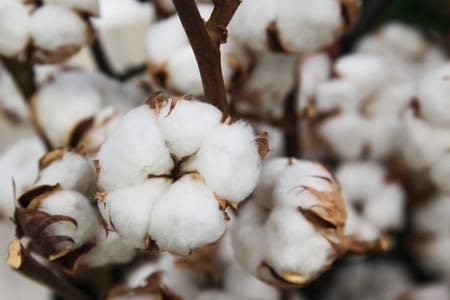 Cotton is a natural fibre that has been cultivated by humans to produce material for clothing and other textile products for thousands of years. Cotton might be natural, but as you might well know from other natural products, this doesn’t necessarily mean it is necessarily vegan friendly.

Take two other common natural products, silk (which comes from worms) and wool (from sheep, alpacas or other animals) and it is easy to see why people might well ask the question, is cotton vegan? Thankfully, cotton comes from plants (cotton plants, no less!) and, so yes, cotton is definitely vegan.

Be Wary of “Cotton Rich” Items

As such, any vegans concerned about the 100% cotton socks they received from their great auntie for their birthday or Christmas should not fret. Of course, there are potential pitfalls when clothing or other textile products are made from cotton that has been mixed with other materials (which can sometimes be referred to as “cotton-rich”). Often though in such circumstances the cotton has been mixed with a synthetic fibre, such as polyester, which is vegan-friendly anyway.

To find details about the non-vegan materials to watch out for, check out our Vegan Friendly Fashion & Clothing article. These include wool, leather, silk, suede, down (i.e. feathers) and animal fur. Most of these would seem rather obvious to most vegans, but sometimes they can creep into products without being immediately obvious so it pays to check the label before buying a new coat or a quilt or anything else made from textiles.

While we have established that cotton is indeed vegan friendly, let’s look at what it is in a little more detail. We’ll also look at the main uses of this long-established material and the potential ethical questions that sometimes arise about the cultivation of cotton, the way it is traded and how some cotton products are made.

What Is Cotton & Who Produces It?

As mentioned, cotton comes from the cotton plant, more specifically of the genus Gossypium which reside in the Malvaceae family (apparently). The most commonly cultivated species of cotton is Gossypium hirsutum, which is native to Central America and surrounding areas and which accounts for 90% of worldwide cotton production and approximately 95% of cotton produced in the USA.

It is the plant’s fluffy seed cases which are crucial to producing cotton and, once the seeds have been removed, the remaining material can be spun or twisted into yarn or thread from which textiles can be made by the yarn being woven or knitted.

The fibres are made up primarily of cellulose (around 91%) with just under 8% (by weight) water. Cotton plants have been cultivated by humans for somewhere in the region of 7,000-8,000 years, with evidence of cotton use that dates back to 5500BC having been found in Pakistan.

Cotton is a versatile fibre that has myriad applications for use in various textile products. They are used for all kinds of clothing from socks and underwear, to shirts and T-shirts to denim jeans and corduroys. It can also be blended with other fibres or substances to produce textiles with different properties, for example to make a more elastic end product.

It can also used to make knitwear including scarfs, gloves and jumpers. Plenty of household products can also be made from cotton, from bed sheets to curtains and blankets to kitchen towels. Aside from clothing, cotton has been used for a wide variety of other products over the centuries, including fishing nets, tents, sanitary products and in bookbinding.

Are There Any Ethical Issues With Cotton?

There are various potential ethical issues with cotton, not least the environmental implications of growing it intensively. It requires a great deal of water, large amounts of land and usually the use of chemical fertilisers and pesticides (more of which below).

Cotton has also been something of a political hot potato at times given the tariffs and subsidies that it has attracted in various jurisdictions around the world. It was long suggested, for instance, that the United States subsidised their own cotton growing industry with the deliberate aim of undercutting cotton growers in far less developed countries. Indeed a World Trade Organization (WTO) dispute settlement panel ruled against the United States in 2004, suggesting that the US (and the EU, incidentally) had used various loopholes to dump cheap cotton on developing markets, undercutting and hence damaging local farmers.

There is also the ethical question of sweatshops and child labour in relation to the production of clothing and other textile products made from cotton. This is less of a vegan issue as such, but with many vegans having wide-ranging ethical stances, it is likely to be something many ethical vegans would want to take into account.

It can be quite difficult to ascertain which manufacturers use truly ethical production methods, though, as many subcontract to the point that it can be difficult to fully trace where certain products are made and under what conditions (as shown by various news stories that have popped up over the years in relation to various retailers in the UK). 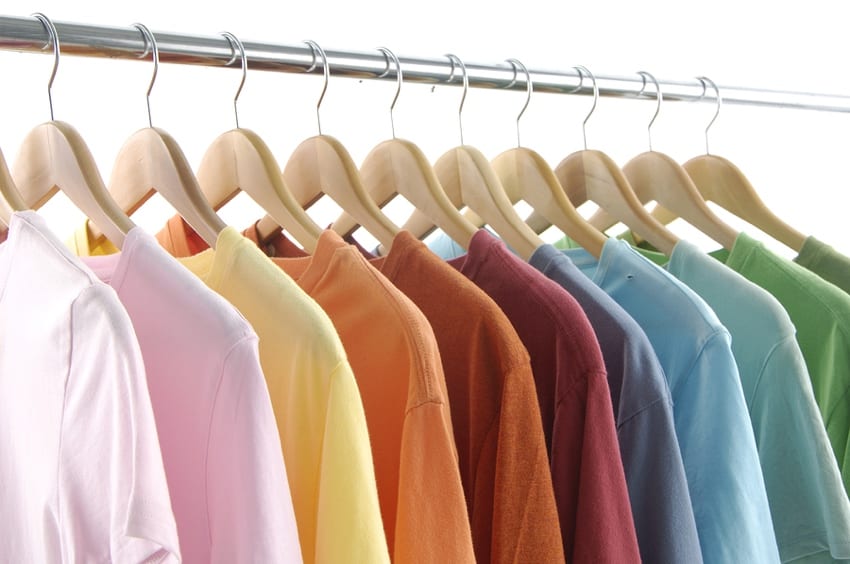 As we discuss in our Is Organic Food Vegan? article, just because something is classified as organic, it doesn’t mean it is necessarily vegan. The reason is because a large proportion of organic fertiliser comes from animal products, either the manure or waste of animals kept for farming or other purposes, or crushed up remains of animals supplied by slaughterhouses (in the form of blood meal, bone meal or fish meal). In contrast, non-organic cotton may use chemical fertilisers but at least these have not relied on animals for their production.

This is often overlooked by vegans who may view organic produce as ethically sound. But going by the widely accepted definition of veganism, it could be argued that using animal waste that comes from horse stables or cattle farms could be viewed as exploitation of said animals. Certainly the use of animal remains from slaughterhouses for fertiliser would not sit well with most vegans.

As said, the main alternative to organic cotton is that which has used various chemical fertilisers and pesticides, which have their own implications for animals. Not only can the chemicals do harm to wild animals exposed to them in the fields themselves, the runoff from the fields can often find its way into waterways and cause further damage to animals and habitat in streams and rivers, and even oceans.

There are certainly massive environmental implications around the use of chemicals in agriculture something that is regularly highlighted by many organisations, including the United Nations Environment Programme (UNEP).

These environmental implications clearly have an effect on an array of animals in the wild, hence the wide scale use of chemicals to grow cotton could be seen to undermine its vegan credentials in some regards. So if both organic cotton and that which is grown using chemicals could be argued to cause harm to or exploitation of animals, what is a good vegan to do?

There is an argument to suggest that the only way for cotton to be truly vegan is for it to be grown without the use of either animal-derived fertilisers (as they are clearly animal products) or chemical fertilisers and pesticides (as they have been shown to harm animals, for example bees).

So, what is the answer? Veganics. According to the Vegan Organic Network, “veganics” is a way of growing food and other plants using only plant-based fertilisers and without the use of chemical fertilisers or pesticides, genetically modified products or products derived from animals. Tracking down veganic cotton might be easier said than done as things stand, but there is hope that such products will become more widely available.

Many people instinctively fear genetically modified (GM) anything, possibly on the basis of the many “Frankenstein food” type articles that hit the newspapers when the technology started to be widely used. But given many of the concerns about GM revolve around what it could do to humans who eat crops that have been genetically modified, it might be the case that far fewer people get het up about GM when applied to cotton (given that you only tend to wear it, rather than eat it!).

In fact, GM cotton has quite possibly helped the environment and thus animals by reducing the need for chemical pesticides. GM has helped produce cotton seeds that contain a particular bacterium (Bacillus thuringiensis ) that is specifically toxic to certain pests that feed on or damage cotton plants. This tactic is far more effective than the broad-spectrum approach of chemical pesticides that can kill or harm a range of insects (including bees) and other animals that wouldn’t have necessarily caused any damage to the crop.

There remain plenty of questions about GM crops in general, but research has suggested that the use of such GM cotton is less detrimental to the environment than the use of chemical pesticides. That said, other research suggests that secondary pests can develop that require further administration of pesticides, so it’s not a black and white issue.

Aside from being a highly versatile and extremely important plant in the context of humanity, the cotton plant has also turned out to be something of a trailblazer. The Chinese Chang’e 4 lunar mission successfully landed on the far side of the moon in January 2019, after which cotton seeds housed in a biosphere contained within the probe germinated.

The sprouts that emerged marked the first time humans have grown anything on the moon… albeit within a very controlled environment. The plants didn’t last long though; after a few days the experiment was said to have ended, but it marked something of a coup for the humble cotton plant.

While you can be safe in the knowledge that anything made from 100% cotton is technically vegan friendly, there are some issues mentioned above that might give some people pause for thought. Most vegans are well used to checking labels and researching products to ensure they tick all the right boxes. And, this should be the same for cotton.

Some people might just want to check the cotton product in question has not been mixed with any non-vegan fabrics. Others though might want to go into a little more detail to ascertain whether or not animal products have been used in the fertiliser of a particular organic cotton T-shirt, or whether garments have been manufactured with the use of child labour.

Like many things these days, it is very difficult to buy a cotton product in full confidence that it is 100% vegan, has had a minimal effect on the environment and has not harmed other humans at some point during its trade or manufacture.

There are some good options for those with strong ethical beliefs though; for instance, buying your cotton products in charity shops minimises the environmental impact massively, and can also obviously give a little cash to the charity in question (that might well have a positive impact on animals directly or indirectly by helping with environmental issues).

Also, making your other cotton products from old clothes, sheets or whatever you would otherwise throw away can also be a great way to reduce your impact on the environment (and hence animal habitats et cetera). For instance, making your own shopping bags out of old clothes that might otherwise have been thrown away not only reduces waste in landfill but also reduces the need for plastic bags, which might otherwise have ended up in the sea.

People will no doubt make their own conclusions about how far to take their commitment to ethical cotton. But one thing is for sure: from a vegan perspective, almost any cotton is a whole lot better than alternative products made from wool, leather or silk.