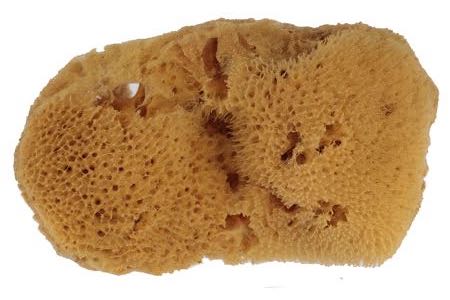 Before we immerse ourselves into the (surprisingly fraught) debate about whether sponges are vegan, let’s first make something clear: we are not talking about sponge cakes (they can be judged on their individual merits… and, yes, you can purchase/make vegan versions). We are also not talking about SpongeBob SquarePants (who, incidentally, does not follow a plant-based diet). We are instead referring to natural sponges (also known as sea sponges), which are used by humans primarily as bath or shower sponges but also as reusable feminine hygiene (menstrual) products.

As with all articles in the Is It Vegan? section of our site, here we will attempt to give a definitive answer to the question at hand. In fact, let’s not beat around the bush. We will clearly state from the off: natural sponges are not vegan and they are not suitable for those following a vegan lifestyle. The reason for our definitive answer is that, believe it or not, sponges are animals, and thus farming them or killing and removing them from their natural environment goes against the ethics of veganism.

We’ll explain a little more about why sponges are not vegan shortly and we’ll also give you a quick rundown of the many vegan-friendly alternatives to sea sponges. We’ll also take a brief dip into the debate about whether it’s possible to produce environmentally sustainable sponges. But first, let’s briefly explain what sponges actually are… time to don your lab coats and spectacles!

What Are Natural Sponges?

Sponges are animals in that they belong to the taxonomic kingdom Animalia in the phylum Porifera. Like corals, sponges are immobile aquatic invertebrates, though, unlike corals, certain sponge species exist in either saltwater or freshwater environments. Sponges have been around for hundreds of millions of years (far longer than humans!) and though they were initially thought to be plants, they have since been shown (through detailed research and categorisation) to be animals.

Of course, sponges do not have as many obvious animal-like traits as something like a cow or an ostrich. They don’t move, for one thing (other than as a result of water movement) and they don’t possess many of the systems that are present in most animals, namely a nervous system, a digestive system or a circulatory system. And, it is for this reason that many people suggest sponges should be fair game for vegans or anyone else: no nervous system means no pain, no pain means no suffering, right? Well, we’ll come back to that later.

The main point to note here is that although sponges are very simple animals, it is nonetheless a scientific fact that they are animals. And for vegans, or at least vegans who follow the ethics of veganism to the letter, this is crucial. 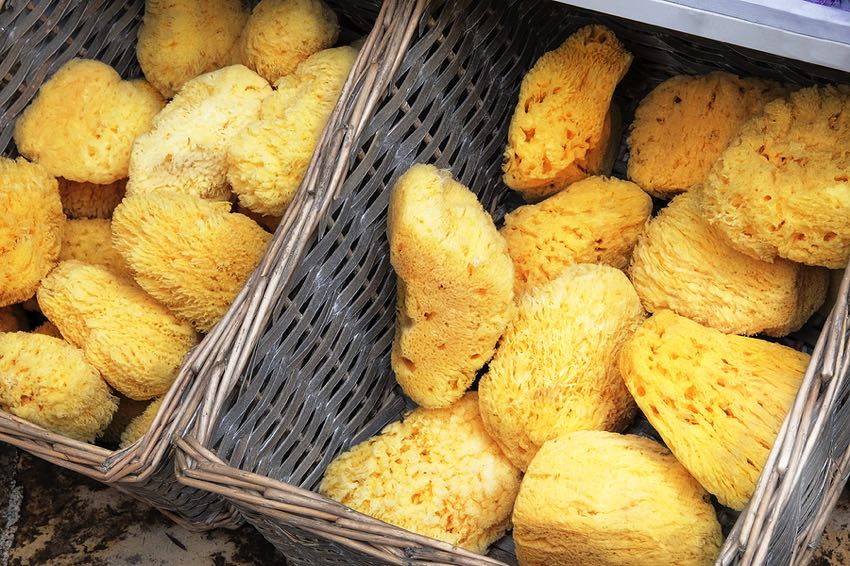 To further explain why the use of natural sponges should not be considered vegan, we need to refresh our memories about the definition of veganism. Although some people and organisations differ somewhat, the most widely accepted definition is the one devised by The Vegan Society. In case you are not familiar, here it is:

Veganism is a philosophy and way of living which seeks to exclude—as far as is possible and practicable—all forms of exploitation of, and cruelty to, animals for food, clothing or any other purpose; and by extension, promotes the development and use of animal-free alternatives for the benefit of animals, humans and the environment. In dietary terms it denotes the practice of dispensing with all products derived wholly or partly from animals.

As we have explained above, sponges are animals. It is clear that farming or harvesting sponges from their natural environments and indeed killing them contravenes the above philosophy of veganism. Though they are not eaten, sponges are certainly exploited for the benefit of humans. In the same way that harvesting coral (which, as mentioned are also animals) to make trinkets for humans is not vegan, neither is collecting sponges.

But What If Sponges Don’t Feel Pain?

As we discuss in our article on mussels and clams, there are some “almost vegans” or self-described “seagans” who follow a mainly plant-based diet but also consume mussels and clams and other seafood. They argue that such basic animals (and they are animals) cannot feel pain and so cooking and eating them does not constitute harm to the animals.

Of course, collecting, cooking and eating animals that would otherwise live in the wild could certainly be seen as cruel and farming them is certainly exploitative. Also, there is a probable knock-on effect of removing sea creatures from the food webs into which they are woven and this could have various environmental consequences that adversely affect other animals. There is also some dispute about whether mussels (and other similar sea creatures) can actually feel pain of some sort. For most vegans, though, this is not really the point: they are animals, and animals are off the menu for vegans.

Turning back to sponges, there are probably a few people who would suggest a level of nuance here given that sponges actually appear less complex than many plants. That said, there is a growing body of research looking at whether plants might experience pain or discomfort (albeit in a different way to that experienced by most animals who have nervous systems). And if it turns out plants do indeed suffer, there could be a fair few vegans facing some ethical dilemmas and they might even find themselves turning towards fruitarianism (which usually involves eating only plant-based foods that can be obtained without causing harm to the plant, such as fruit that has fallen to the ground naturally).

Of course, everyone has to draw their own line in the sand when it comes to ethics. But the majority of vegans are likely to seek simplicity and, as such, excluding products made from animals (including sponges) is likely to be the way to go. On the other hand, if you feel that such animals are more akin to plants then you might decide you feel comfortable with using them. We are simply providing the facts and on that point things are simple: sponges are animals.

There is one instance when sea sponges could be considered vegan: when they have been found on a beach. There is the caveat here that some beaches have particular ecological importance and might lie within a protected area, in which case taking anything away with you would not be desirable. But if you find a sponge that has washed up on the beach somewhere and it has already died then it would feasibly fall within the philosophy of veganism, in much the same way as foraging naturally shed deer antler for dog treats or even, far more controversially, collecting and consuming roadkill could be considered vegan.

From an environmental perspective, it would generally be better to leave sea sponges when they wash up as there are probably various other organisms that could benefit from it for food or protection. But on the other hand, if you use that sponge instead of buying one made of polyester or something similar, there could be an overall benefit to the environment of you opting for the natural option. We’ll leave it to your judgement, though encountering a washed-up sea sponge is not an everyday occurrence, at least around the beaches of the UK. 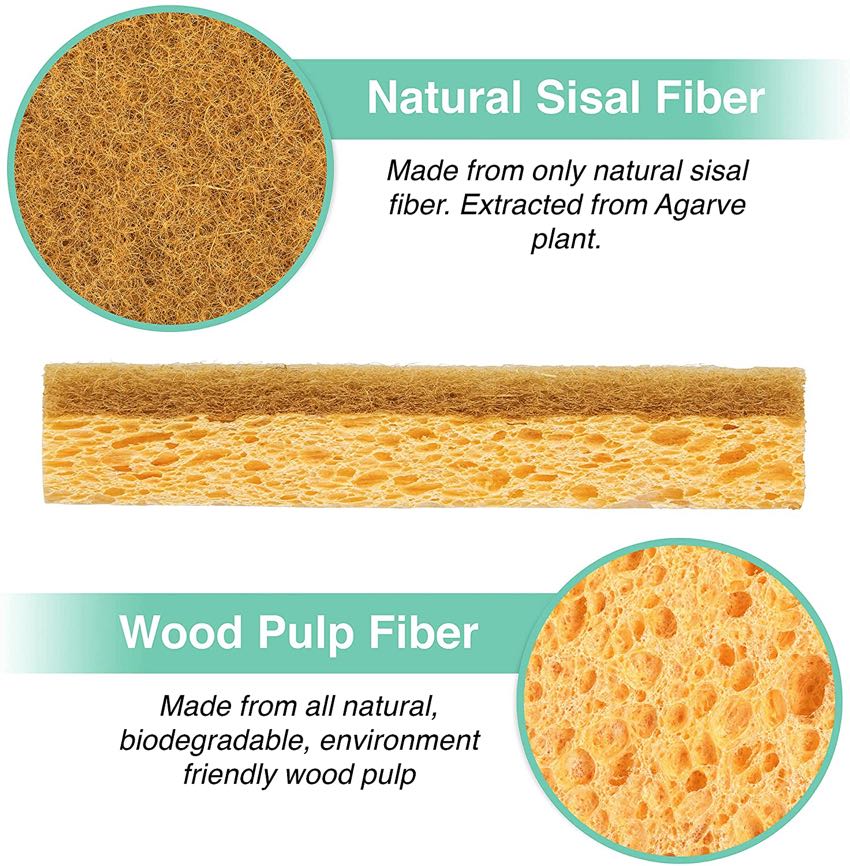 If we go with the idea that sponges are not vegan, what are the main alternatives vegans should opt for instead? Well, luckily, there are loads of things to choose from, though some are more environmentally sound than others. Some of the options mentioned are available from our favourite vegan-friendly retailer, TheVeganKind Supermarket.

A good alternative to a sponge, these billowy balls of material are not quite as absorbent as sponges, but they do the job well enough for most people. Opting for an organic cotton option will further reduce the environmental impact (though any cotton is likely to be better than an alternative made from polyester or another plastic).

Made from various plant-based materials (such as plant cellulose), the best eco sponges are highly absorbent and also 100% compostable as they contain no plastics. They are particularly good as eco-friendly washing-up sponges.

Although these are arguably the closest you will get to natural sponges, they are not great for the environment given that they are made from plastics that will take years (if not centuries) to decompose. We’d recommend opting for one of the plant-based options instead.

A coarser option than natural sponges, but very useful for scrubbing yourself clean in the bath or shower, a loofah is made from fibre bundles of the luffa genus of a tropical vine that is related to the cucumber. This is a preferable option to plastic-based products from an environmental perspective and – as it’s made from a plant – it is perfectly fine for vegans.

Who needs a sponge anyway? For many, a flannel will prove perfectly sufficient and as long as you choose one made from cotton (or some other plant-based material) it will be vegan and should be relatively environmentally friendly.

There are loads of other plant-based options available that have various uses (including products made from coconut coir or fibres), but we’ve given just a snapshot to show you that sea sponges are not an irreplaceable item by any means.

In summary, we can assert the following in relation to natural sponges.