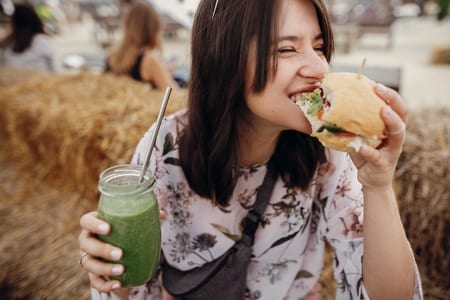 Gone are the days when the best a vegan could hope for at a British festival was a sorry looking salad or a greasy portion of chips. Vegan food has now hit the mainstream and most festivals and events will feature at least some tasty vegan dishes, ranging from seitan kebabs to Indian street food snacks with a whole range of creative cruelty-free dishes in between.

Across the UK you will also now find specialist vegan food festivals and lifestyle events, which would have been unthinkable even as little as five years ago. These are a great opportunity to get hold of the latest information on everything vegan friendly, try some great vegan food and drink, as well as meeting up with like-minded people.

The list below contains the latest information on the UK’s growing vegan festival and events scene. Attending one of these events is a great way of supporting the vegan cause by listening to prominent vegan speakers, making new friends, finding out about vegan-friendly companies in the local area and, of course, sampling some of the finest vegan food out there!

As great as it would be to attend every vegan festival in the UK, sadly, that hasn’t been possible for us (yet!), so this is a list of suggestions rather than recommendations based on the information available at the time of writing – new festivals are being announced all the time. We will be updating this list throughout the year.

As with any event, it is always advisable to check the latest information before setting off to ensure there hasn’t been any changes – social media usually has the most up-to-date details. We all know that the great British weather can play havoc with even the best laid plans so it pays to check before starting your journey.