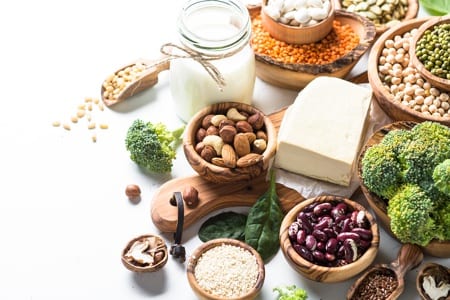 Vegans are often disparaged in a range of ways and one of the most commonly held misconceptions is that the vegan diet cannot provide the same nutritional balance as an omnivorous one. Whether you are a vegan already and concerned about your protein intake, you are considering a change towards a plant-based diet, you are concerned about the health of a friend or family member who is a vegan or you are simply interested, here we take a closer look at how vegans can obtain sufficient protein.

We’ll start by looking at a simple question: can a meat- and animal-product free diet provide sufficient protein for health? We’ll then look in a little more detail at whether vegans can get a good range of proteins and, lastly, look at what foods they should be eating and what protein levels these have.

How Much Protein Do We Need?

In actual fact, the vast majority of people in the UK and most other countries in the developed world eat too much protein. The British Nutrition Foundation recommends eating 0.75g of protein per kilogram of bodyweight, although the World Health Organisation (WHO) actually goes with a slightly lower figure of 0.66g per kilogram.

Taking the higher figure, that means that a person weighing 12 stone (76.2kg) would need around 57g of protein per day. As an indication, a standard sized serving of beans on toast (two slices) would provide around 300 calories and 19g of protein. That’s 33% of the required protein from a small meal containing approximately 14% of your daily calories. For most people in the developed world, obtaining enough protein should be very low on their list of nutritional goals.

Protein Consumption in the UK

Protein consumption in the UK has been growing for a number of years now, with Mintel (a market research group) reporting that between 2010 and 2015, there was a 500% growth in the number of new foods claiming to be “high protein”. That and other factors have helped fuel a rise in mean protein consumption with the average for men now standing at a huge 88g. According to the National Diet and Nutrition Survey, people in the UK consume approximately 50% more protein than they need each day.

Whilst most people may be concerned they aren’t getting enough protein, the truth is most people are consuming too much! In contrast, fibre, perhaps the least sexy food type, is something you read little about and not something the average Brit worries about. And yet according to Public Health England, average intake of fibre in the UK is 37% lower than the recommended 30g per day.

Fibre, like protein, also helps you feel fuller and has a huge range of health benefits that are supported by peer reviewed scientific studies. There are also numerous pieces of scientific research that show that most vegans eat significantly more fibre than their omnivorous friends, and also more than vegetarians. Perhaps those concerned about the protein intake of vegans would be better spending their time thinking about the dietary fibre needs of meat-eaters?

Do Vegans Get Enough Protein?

Whether you yourself are a vegan or not, in short, there really is no need to worry that a vegan diet won’t provide you with enough protein for good health. As you can see below, there are a wide range of plant-based foods that contain protein. Soy products are high in protein, whilst nuts, seeds, pulses and a range of other vegan foods are also excellent sources.

In short, obtaining your recommended 0.75g of protein per kilo that you weigh really shouldn’t be an issue. Having said that, some people, chiefly those doing high levels of exercise, especially where the ultimate goal is to increase muscle mass, may want to consume more protein.

There are many world class vegan athletes and even bodybuilders, and whilst some argue that higher levels of protein aren’t needed, even to bulk up, there are a plethora of options for vegans choosing to eat a high protein diet. With careful planning you can obtain the required protein through natural foods. If that isn’t convenient, then elsewhere on the site we also take a closer look at the various vegan protein powders and bars that are available.

Whilst it should certainly not be any issue for a vegan to get the quantity of protein they need, there are some that argue a green diet is lacking in quality. It is true that meat and other animal products contain certain combinations of proteins that are only found in a very limited number of plant-based foods. However, this issue is very easily remedied and there is no reason for a vegan to be concerned about the types of protein they will be able to consume.

“Protein” is the broad name given to the macronutrients that help the body perform a huge range of functions, most notably to build and repair tissue and help create and transport enzymes and hormones around the body. However, there are different types of protein and some critics of the vegan diet feel that it doesn’t offer the same quality or completeness of proteins.

Proteins are essentially made of amino acids and different foods contain differing amounts of these. There are around 20 (traditionally there were said to be 20, but now there are thought to be more) different amino acids and humans need all of these.

Around half of these can be made in the body, but some, such as tryptophan (a precursor for the “happiness hormone” serotonin) cannot and must be obtained from the diet. These are known as the essential amino acids and meat and products derived from animals contain the full range of these, whilst most plant-based foods only contain some of these amino acids.

However, there are several vegan foodstuffs that do indeed contain all of the essential amino acids and are therefore “complete”. PETA (People for the Ethical Treatment of Animals) lists 11, including chia seeds, quinoa and buckwheat. (Here’s a little fact for you: buckwheat isn’t a wheat at all and is actually related to rhubarb, although it is considered a pseudocereal – a non-grass plant producing edible grains.)

In truth, several of PETA’s 11 are combinations of foods but this highlights a more important point about the completeness of vegan-friendly proteins. It doesn’t matter that beans alone are not a complete protein because you can very easily eat them with toast – we’ve heard it’s a popular combination! – and thus create a complete protein-rich feast. Indeed, as long as your body regularly gets the full range of essential amino acids, it doesn’t matter if these don’t come in the same meal, let alone the same single food.

There are many simple combinations of vegan protein sources that combine really well and you can see some of these below. The term “complimentary proteins” was coined to describe the way grains and legumes combine to create a complete amino acid profile. Nuts or seeds are also complimentary alongside legumes, meaning there are even more easy ways to get all your essential (or indispensable) amino acids. Just choose a food from one group and combine with its complimentary partner group and away you go!

As such, as easily as the issue of protein quantity can be dismissed, so too can the question of whether a vegan can get the required quality, or completeness of protein. As well as quinoa, chia seeds, pumpkin seeds and buckwheat; hummus and pita bread, beans on toast, and rice and beans of many varieties are just some of the quick and simple ways for those eating a vegan diet to get their essential amino acids. 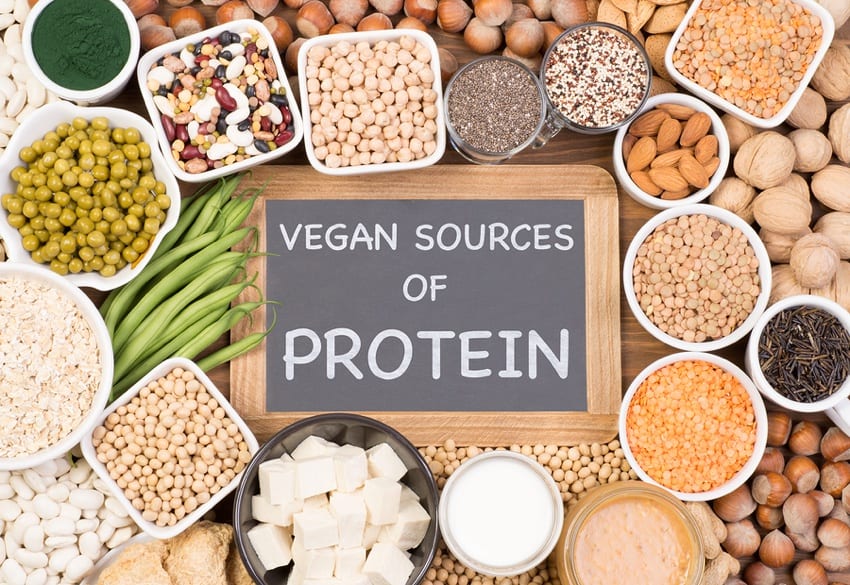 So, we’ve already looked at some foods that are high in protein, as well as ways to obtain all of the amino acids the body is unable to synthesise. Now you can see a wider range of these, as well as the exact amounts of protein packed into these vegan powerhouses, subject to slight variations based on cooking methods and so on.

*Values based on McCance and Widdowson’s ” The Composition of Foods Integrated Dataset 2015″ compiled for Public Health England (PHE), an operationally autonomous executive agency of the Department of Health of the UK Government.

Of course, there can be variation within some of these foods, such as pasta and bread. For example, some seeded or wholemeal breads may have 11g or more of protein per 100g, with the added advantage of including a wider range of amino acids too.

If those figures just seem like numbers on a page, to give you a better idea, for fruit and veg, 80g is usually classed as one of your “five a day” and for many plants this equates to around a handful.

Alternatively, a lunch of one wholemeal pita bread with a small serving (two tablespoons) of hummus and a small quinoa salad (100g) containing edamame, some sweetcorn and some greens might provide as much as 20g of protein.

Throw in a serving (28g) of almonds and that takes you to 26g, or almost half of your daily requirement. Delicious, nutritious, protein-packed and containing all nine essential amino acids.

Below is a further list of foods and popular combinations of foods that easily allow vegans to obtain all of the essential amino acids in one fell, not to mention tasty, swoop!

There really are so many great options. If we’ve missed any of your favourites, be sure to get in touch!

Health, wellbeing and nutrition are areas highly where fads and trends hold particular sway with many people in the modern age. From Men’s Health to Marie Curie and from the Sunday newspapers to “trashy” magazines, barely a week goes by without the “discovery” of a new superfood or wonder-diet.

Much of this is down to the fact that people don’t want to hear the truth. US author, Michael Pollan, said, “eat food, not too much, mostly plants,” and by and large that’s all one really needs to know about nutrition. However, if headlines proclaimed, “As we have always said, eating a wide range of fruits, vegetables, nuts and seeds in moderation and moving your body regularly is the key to a long life”, they wouldn’t sell many papers.

Most people want quick, easy fixes as opposed to sensible but boring truisms. Equally, it’s hard to commercialise healthy eating, but far easier to make a fast buck writing about, or selling, some new fad.

For some time now protein has been “in” and has been viewed as central to a healthy diet. How often do you read about a celebrity saying they eat “lots of veg and lots of lean protein” – with lean protein usually referring to poultry or fish? At different times, different types of diets become fashionable, with some foods and types of foods falling in and out of favour.

At one time, fat was viewed as the major dietary constituent to avoid, whilst now it is very much sugar on the nutritional naughty step. Equally, carbohydrates, especially complex carbs, such as rice, pasta, potatoes and the like, were once viewed as the cornerstone of a healthy diet but have now been relegated, for many, to foods to eat sparingly. For various reasons, ranging from a growth in gym culture to its satiating properties, protein is very much en vogue now and has been for a number of years.