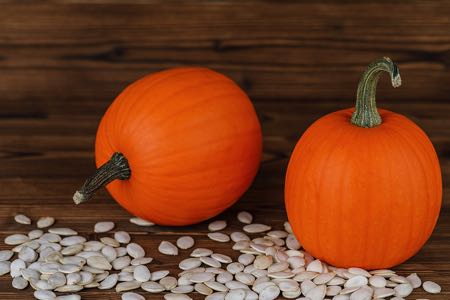 For those of you who thought pumpkins were just for carving at Halloween or perhaps to make a pumpkin pie, think again. Pumpkin seeds are a very good source of protein and they pack in some other nutritional benefits too. They are neither as popular nor – many would argue – as effective as some other vegan protein powders, but pumpkin seed protein has its place as a cost-effective, healthy protein source for vegans and non-vegans alike.

This still falls significantly short on the protein front when it comes to either pea protein isolate or indeed non-vegan options such as whey, which tend to contain upwards of 80g of protein per 100g of powder.

Like sunflower seed protein, the powder made from pumpkin seeds does not have an overpowering flavour so it can be mixed with a range of things from porridge to shakes to muesli. Because of the relatively high (mostly unsaturated) fat content, the mouthfeel tends to be comparable to that of whey protein in shakes.

It should probably go without saying, but clearly, pumpkin seeds are 100% vegan friendly, which is a big benefit for anyone on a plant-based diet. They are also gluten free and are a good way to avoid allergies to either dairy (whey) or soy that might be provoked by other protein products. 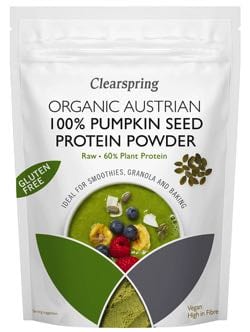 As we can see, a typical pumpkin seed protein powder contains about 60g of protein per 100g, which is around 20g short of a typical whey protein isolate. But a good proportion of the difference is made up in fibre on the part of pumpkin protein. For people seeking to gain muscle, fibre neither helps nor hinders, but it does promote a healthy digestive system and, according to the NHS, “eating plenty of fibre is associated with a lower risk of heart disease, stroke, type 2 diabetes and bowel cancer”.

Unless whey protein has been fortified, it doesn’t compare with pumpkin seed protein (or indeed most plant-based protein powder options) when it comes to vitamins and minerals (except for calcium, which is usually present in whey in reasonable quantities). So, while whey wins on the protein front compared to pumpkin seeds, the latter offers a better overall package when it comes to enhancing a person’s general health.

If you have read any of the other vegan protein powder profiles on this site you would be forgiven for thinking we’re sounding a bit like a stuck record. But when it comes to buying any product you are going to literally consume (i.e. put in your body) it really does make a lot of sense to stick to brands and/or retailers you trust. In this way, you can be sure that the products meet all the required safety and legislative standards and are of good quality.

When it comes to pumpkin seed protein powder, it isn’t as common as some other options, such as pea protein, rice protein or even hemp protein, but there is still a fair amount of choice out there. That’s not to say the products are all that different though.

Most tend to be made from 100% pumpkin seeds and we would tend to stick to those rather than any that include any flavourings, added sugar or anything else. For vegans, 100% pumpkin seed protein is perfectly vegan friendly and it is more likely to include all the desirable nutrients (that could be “watered down” proportionally by the addition of lots of other ingredients).

What Is Pumpkin Seed Protein Powder? 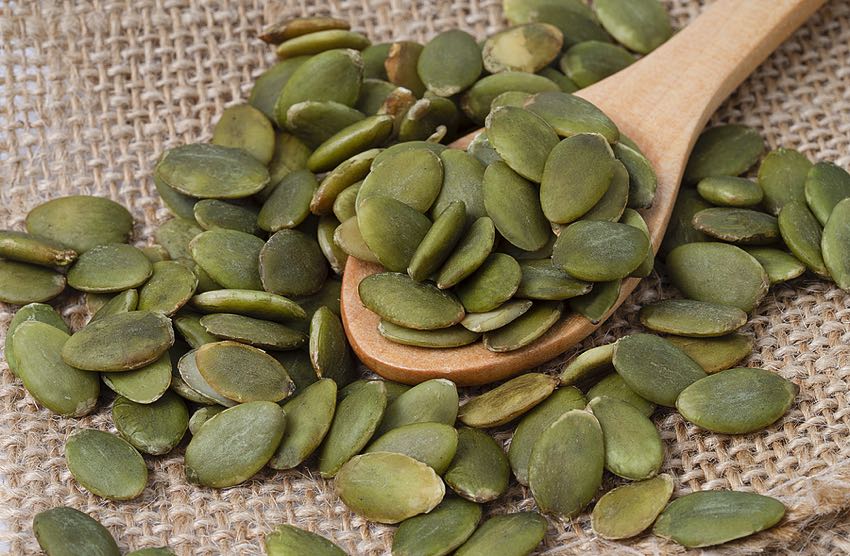 Surprise, surprise! Pumpkin seed powder is powder made from pumpkin seeds. Whether you are familiar with the bulbous orange winter squash from making lanterns for Halloween or perhaps from memories of Cinderella’s carriage, this distinctive, pulpy gourd has plenty of uses. One of which is to produce protein powder from the seeds.

How Is Pumpkin Protein Powder Made?

In very simple terms, in order to make the seeds into protein powder, they are removed from the pumpkin, cleaned and dried/dehydrated and then ground into a fine powder. It is possible they could be pressed to remove the majority of the oil prior to grinding, though this will differ from brand to brand and may account for differing protein and fat levels between products you might encounter.

Make Your Own Pumpkin Protein Powder

It is technically possible to make your own pumpkin seed protein. If you want to do it from scratch, i.e. to sow, grow and harvest the pumpkins, remove, dry and grind the seeds, it would be a laborious process; not least because removing the seeds from a pumpkin is a much messier affair than acquiring the seeds from a sunflower, for instance.

If, on the other hand, you simply want to buy the pumpkin seeds from a shop and grind them up, it would certainly save a fair bit of time and hassle. But whether it would save much money (as compared to simply buying protein powder) is debatable and the protein content would be less than the powder products you can purchase. Overall, given that pumpkin seed protein powder isn’t as pricey as some options, if you are interested in pumpkin protein powder, it makes sense to just buy it readymade rather than attempting to make your own. 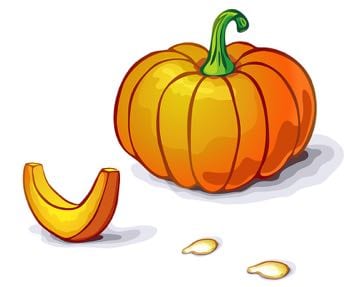 As with sunflower seed protein and hemp protein, pumpkin seed protein powder is going to appeal most to people who are seeking more than simply the highest possible quantity of protein in order to add muscle mass. This “more” comes in the form of nutritional benefits, most notably fibre, magnesium and phosphorous.

Of course, if you are not overly concerned about maxing out the protein content, you could just eat pumpkin seeds in their natural form rather than buying the powder, but the latter is more convenient if you want to add to shakes and smoothies.