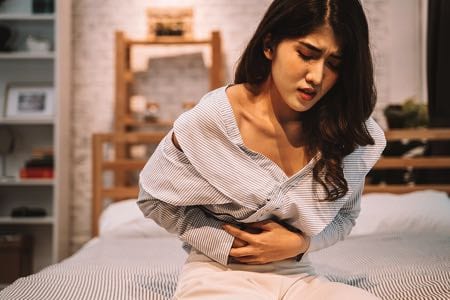 We have talked about the health reasons for going vegan at great length and it our firm belief that a vegan diet can be incredibly healthy. It is also the view of the NHS who state that with “good planning and an understanding of what makes up a healthy, balanced vegan diet, you can get all the nutrients your body needs”. It is also, clearly and demonstrably, the opinion of the many world class sports stars and athletes who are vegan.

Despite this, many falsehoods and myths about veganism remain. One area of concern that is commonly cited is digestion, with people assuming that a plant-based diet means issues, such as constipation, bloating, gas and flatulence are inevitable. In this piece, we will look at vegan digestive issues in general and more specifically try to separate the fact from the fiction when it comes to veganism and the issues mentioned. Does veganism make bloating, gas, constipation and the like worse or does it perhaps even make them better?

As usual, when it comes to health issues the following information does not represent medical advice. Whilst a healthy vegan diet will – spoiler alert – usually help with the conditions mentioned, if you are experiencing any severe pain or ongoing issues in this regard your doctor should be the first port of call. 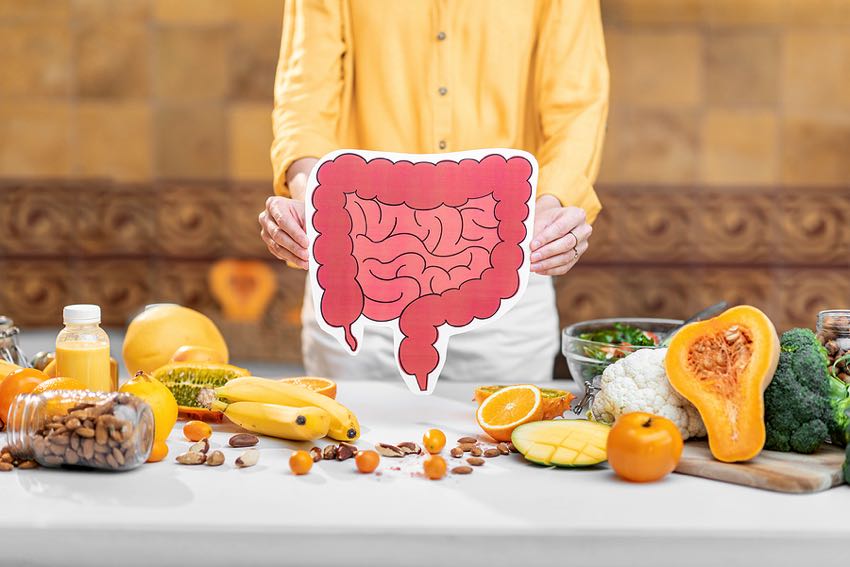 The digestive system is a complex one and an example of how the human body is a wonderful and finely honed piece of machinery. There is still a lot we do not fully understand about digestion and how the body metabolises food and there are many factors that impact upon it. Most of the issues we are looking at in this piece are interrelated too but here we will look most closely at the sometimes very uncomfortable affliction of constipation.

Once again we defer to the NHS, who list the following as possible causes of what can be a painful and distressing issue:

This fairly lengthy list of possible causes, some of which are or can be related to one another, illustrates how the issue of veganism and constipation might be confusing. One of the most likely causes of constipation is a diet that is low in fibre, with the consumption of high-fibre foods the most common, simplest and best home remedy. We talk a little more about this in our feature on veganism and natural laxatives.

At the same time, changes to one’s diet can cause constipation and, perhaps counterintuitively, this includes adding more fibre to your diet. The body can adjust to many things but equally that means it can get used to many things. If your body is accustomed to a relatively low fibre intake, a sudden increase can throw it out of sync and one of the impacts of this can be constipation.

Constipation caused in this way can often be relieved by drinking more water. However, generally speaking, such issues will pass as your body adjusts to its new fuel. Once it does become accustomed to the higher amount of fibre you are consuming your constipation go away and indeed you are then far less likely to suffer from the issue in the future.

That said, in some cases eating too much fibre can cause more sustained digestive problems. This is rare though, with most people in the UK (as a whole) eating too little fibre. The British Nutrition Foundation suggest that men in the UK consume around 20g of fibre per day, with women eating just 17g, both well below the recommended 30g.

Given those numbers it is fair to assume that very few people are reaching the sort of levels of fibre intake required to cause longer term gastrointestinal complications. It is believed that for most people eating up to around 70g of fibre should be fine and indeed the US recommended intake for men is almost 40g per day.

Veganism fits into this picture because in general vegans consume more fibre than people who consume animal-derived food products. Various studies back this up, including one which showed that vegans ate around twice as much fibre as omnivores. If you are new to veganism, short-term constipation may even be one of the side effects, sometimes mistakenly believed to be “meat withdrawal”. However, rather than viewing veganism as a cause of constipation, it is probably better to view it as a way of relieving and avoiding it.

Whilst in the short-term you may experience some changes in your bowel movements, the bigger picture is likely to be positive. Of course, this whole argument is based on the assumption that as a vegan you will be eating more fibre. In general, this is likely to be the case, as research has shown. There is no fibre in animal products, with all dietary fibre coming from plants and vegan staples, such as legumes, nuts, seeds, fruit, veg and wholegrains. Therefore, the various studies are backed up by logic but of course not all vegans will be eating a nutritious, balanced and fibre-packed diet.

Simply going vegan will neither automatically mean you eat more fibre, nor necessarily mean you will avoid constipation. If you eat a very poor vegan diet that lacks the natural foods mentioned above and is instead packed with vegan fast food, processed items and food that is just generally of poor nutritional value, then this may well be the cause of constipation and the other issues we look at. Equally, even a diet packed with fibre may result in constipation if it is accompanied by a lack of water and fluids, too much stress and very limited physical exercise.

No Direct Link Between Constipation & Veganism 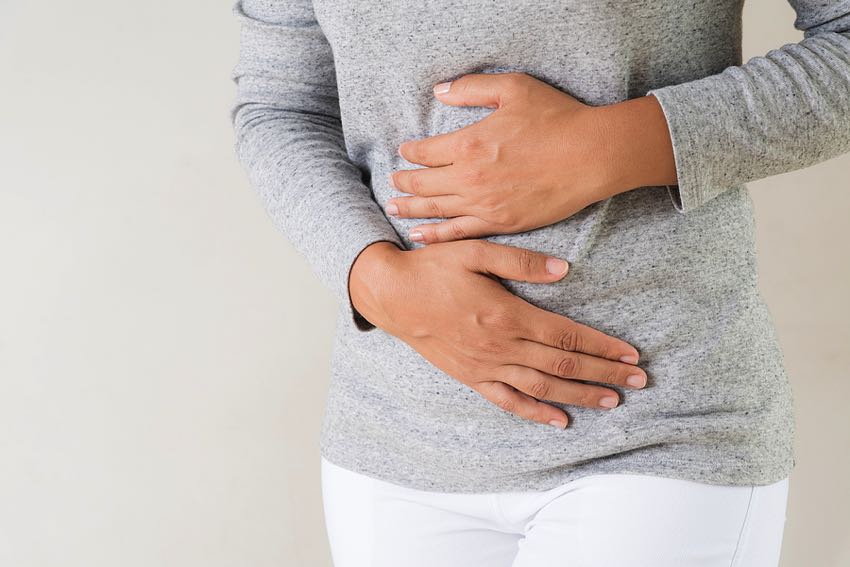 When it comes to gas, bloating and constipation, and whether a vegan diet helps or hinders these issues, the answer is largely the same. These are all similar and often related problems and whilst they can all be caused by a range of factors, their link to veganism is broadly equivalent.

Constipation can cause bloating, as can eating too quickly, especially if that means you take in air whilst you eat. Food intolerances and the more serious Coeliac disease (read about veganism and gluten free foods here) can also be to blame, as can irritable bowel syndrome (IBS) and excess farting or gas.

Clearly, if changes to your diet made when becoming vegan have led to constipation, this might also explain your bloating. Dietary changes may also mean you are eating more of a certain food that you could be intolerant too. However, there are certain foods that are generally more linked to causing bloating. Whilst this can vary dramatically from person to person, foods often cited tend to be vegan staples, with the following all possible culprits.

As well as possible causes of bloating, the above are also likely to cause excess wind. In the case of some legumes this can be reduced by soaking them and making sure they are thoroughly cooked but always follow the instructions for the relevant food.

That said, many people complain about simple carbohydrates and refined foods causing bloating, whilst meat is also linked with this and gas. There are a number of variables that affect all of these digestive ailments but when it comes to veganism, most will pass once your body becomes more accustomed to the likely higher fibre intake.

Once that happens, assuming there are no other explanations for your bloating, gas or wind, as listed above, you should find that such problems are reduced if you are eating a healthy vegan diet. This is because most plants are generally easier for your body to process and digest than certain animal products.

In addition, whilst fibre-rich food can make you feel fuller and does create gasses when it is digested, in general, it is one of the best options for improving overall gut health.

The BMJ added that recent studies have shown that “major increases in dietary fibre can temporarily reduce diversity” which further adds weight to the argument that some of the issues we are talking about here may be related to an adjustment period as your body adapts to a higher level of dietary fibre. 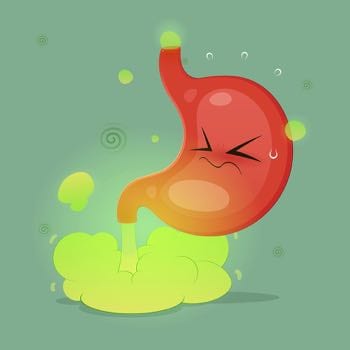 When it comes to constipation, it is very much true that this will pass once your body adapts. You can help this process by slowly transitioning to a diet that is higher in fibre. Obviously, if you have decided to become vegan you will want to do that straight away but it is still possible to gradually introduce your body to a diet that has more fibre. Doing this should certainly reduce the severity of all of these digestive issues.

However, when it comes to farting and bloating, it may not be the case that your body simply needs time to adjust and depending on what sort of foods you are eating a lot of they could be more permanent. There is no reason that a vegan diet per se will lead to these problems but certain types of vegan diets may well do.

Legumes are one of the best vegan sources of protein so people, such as vegan bodybuilders, will quite probably be going pretty hard on the beans, lentils and pulses. Vegan protein powders and protein bars can limit the sheer volume of such foods some vegans will need to eat but most people, be they pro athletes or just vegans wanting to maintain a healthy diet, do not want to rely solely on protein supplements.

A Note on Legumes

Nuts, seeds and other vegan staples, such as quinoa, can be good sources of protein too but most vegans are going to be eating at least some legumes. Even noe vegans should be though as they are a great source of fibre and minerals as well as protein and are generally considered to be among the healthiest foods out there.

Nutrient-packed though they are, for some, even many people, vegan or not, these foods are going to lead to gas. As said, soaking some beans and lentils can lessen this by making it easier for our bodies to fully digest them.

In addition, staying fully hydrated tends to help, especially around mealtimes (though some people find that drinking with food can increase bloating!). That said, avoiding fizzy drinks is likely to help, with plain old (still) water the best option. In addition, cooking vegetables is likely to help as opposed to eating them raw and making sure legumes are properly cooked is also beneficial. Adding ginger, turmeric and cinnamon to dishes can also help.

Ultimately though, farting and burping are common and natural bodily functions. Unless they are really excessive or painful you should accept them as such. The many benefits of veganism certainly outweigh a bit of extra gas and it should be noted that many claim that the farts of vegans are far less pungent than those of omnivores. This is not something we are prepared to investigate, however.