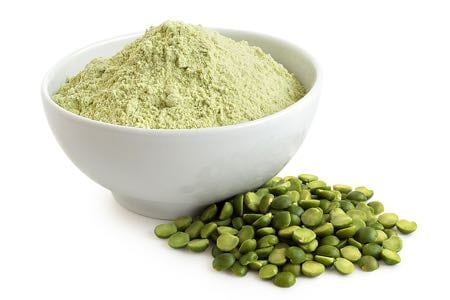 Pea protein powder is one of the most popular Vegan Protein Powder options available, and for good reason. Such powders are not only a great source of protein but they also contain a range of other beneficial nutrients. In this article, we’ll explain all you need to know about pea protein including what it is, how it’s made, the benefits or drawbacks relative to other types of protein powder and how to select the best pea protein powder for you.

If you would like details about what pea protein powder is and how it’s made, go to the What Is Pea Protein Powder? section below. For those who already know all that, let’s kick things off here with the benefits of pea protein over other plant based protein powders and indeed non-vegan options too. 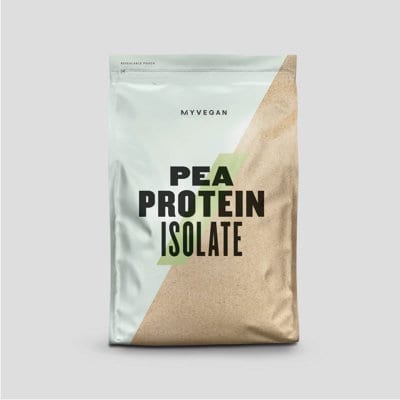 Available in both flavoured and unflavoured versions, with the choice of flavours including Chocolate, Strawberry and Chocolate & Walnut. 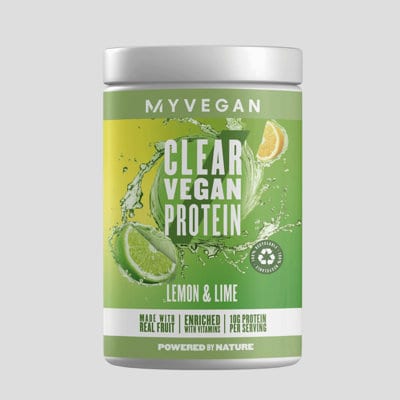 MyProtein have made a clear fruit flavoured protein shake that should appeal to those who aren't a fan of the milky taste of a traditional protein shake.

The shakes provide 10g of pea protein per service and comes in five flavours: Lemon and Lime, Pineapple and Grapefruit, Apple and Elderflower, Strawberry and Blackcurrant.

For vegans, perhaps the biggest benefit of pea protein powder over products made from animals is that no animals were hurt to make it. But the same is true of other plant based options, so what helps pea protein stand out as one of the most popular protein powders amongst vegans and non-vegans alike?

The main drawback of pea protein relative to whey or some other animal-based protein powders is that it does not contain all the essential amino acids in significant quantities. It does have good quantities of the BCAAs (though still not quite as much as found in whey), but some of the other amino acids are less plentiful.

Having said that, this is not going to be a major problem for anyone who follows a diet that is even a little bit varied. It is very possible to obtain all the essential amino acids from the main high protein vegan foods. Failing that, buying a plant blend protein powder that includes pea protein and either brown rice protein or soy protein will bolster the amino acid profile.

Given that pea protein is not quite as bio-accessible as whey, some people opt to pick pea protein that contains extra enzymes to aid digestion. Most people shouldn’t need to take this option though as the difference they make would be hard to notice.

If we take a popular 100% pea protein isolate powder (Pulsin Pea Protein Powder, that is available to buy from TheVeganKind Supermarket, among other retailers). Here are the typical nutritional values compared to an almost-100% whey protein isolate (they tend to have a very small amount of emulsifier added, but essentially it is close to 100% whey isolate).

Note that the serving size of the whey is 2.5 times that of the pea protein but this is just based on the manufacturers’’ recommendations. Obviously, you should up the serving of pea protein to get a fairer comparison.

Easier than that though is to simply use the per-100g data and based on those figures, there is not much between them in terms of the protein content. While the pea protein has a higher quantity of fat overall, the whey has significantly more saturated fat. Pea protein has some fibre, and though it is not a lot, it’s better than whey, which contains none. The whey contains more in the way of sugar too, though this will vary from product to product.

Overall then, based on those key macronutrients, it is safe to say that generally, pea protein powder stands up well to non-vegan options. The key numbers that most people will be concerned about are the overall calories and the protein and there really isn’t too much in it. Pea protein offers 80g of protein and 406 calories per 100g compared to 82g and 412 calories for the whey-based offering.

How to Select the Best Pea Protein Powder 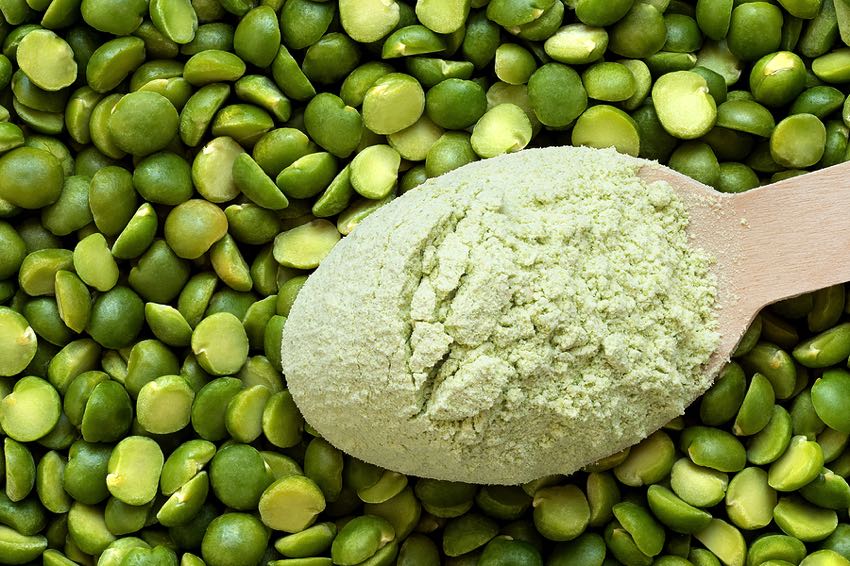 As with just about any buying decision, it pays to do a bit of research, but particularly when it’s something you are going to put in your body. Here is our quick guide to finding the best pea protein powder for you.

That’s why you’re here, right? Well, it pays to do a bit of reading about what’s in each product, especially those with lots of ingredients. And, also how it was made (see below) and by whom.

With anything you are going to consume, it makes sense to ensure it has been made by companies who adhere to all the necessary safety and nutritional standards. We only ever feature products on this site that tick all the boxes on that front, as would retailers, such as TheVeganKind Supermarket or Holland & Barrett.

The cleanest pea protein powder you can get is when that is all you get; that is, there are no additional ingredients, whether to change the colour, flavour, shelf life, digestibility or anything else. Of course, if you fancy a chocolate flavour powder and it has some natural cocoa powder thrown in, that’s no big deal and will even give you a nice antioxidant boost.

If the ingredients read like an experiment that might be performed during study towards a master’s degree in biochemistry, we would be inclined to give it a wide berth.

Of course, given that it is a subjective thing, it might be useful to pick two or three pea protein powder products to try (but be careful you don’t order 5kg tubs of each!).

Then you can assess which works best for you in terms of the flavour, how well it mixes with your preferred liquid and whether it helps you build muscle, recover better from injury, lose weight or achieve whatever other goal you have.

What Is Pea Protein Powder?

Not wanting to state the obvious, pea protein powder is simply a powder that is high in protein that is made from crushed split peas. Split peas are standard peas that are the seeds of the Pisum sativum plant. (as you might have with you Sunday roast); the difference is that split peas are more mature seeds, whereas garden peas, as they are called, are harvested while immature. Split peas are generally sold for use in soups, dals, stews and casseroles.

After harvest, the peas in questions have been dried, peeled and – as the name suggests – split into the two parts that make up the spherical shape of the pea with which most people will be familiar. Split peas are proportionally higher in protein than garden peas (as they have less water content) and pack in more than 20g of protein per 100g (though that is when uncooked; this – roughly speaking – halves when cooked in water).

This is around double the protein content of garden peas. Not only that, split peas (and garden peas for that matter) contain plenty of fibre and other nutrients. But how are split peas turned into the protein powder products you might find in your local Holland & Barret?

How Is Pea Protein Powder Made? 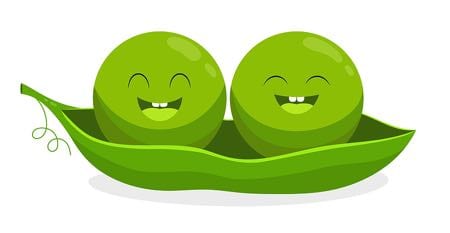 If dried split peas were simply ground up and put in a package you would have a protein powder of sorts… but with just protein content of between 20g and 25g per 100g, it just wouldn’t compete with the whey or casein powders which contain anything up to 90g of protein per 100g. So, how are split peas processed to ensure the protein content is increased? The key – like with most protein powders – is to concentrate or isolate the protein of the peas and to eradicate some of the other parts that are less useful (in this context at least).

When shopping around for pea protein powder, you will probably have encountered the terms “pea protein isolate” and “pea protein concentrate”. These terms refer to the way the peas have been processed and you will encounter them with other plant based protein powders (and indeed those made from animal products too). Both methods of processing are designed to increase the amount of protein as a proportion of the end product by removing carbohydrates, fats, some of the fibre and other substances, including water. Let’s briefly look at how the processes differ.

Most pea protein powder products come in the form of isolates. A process of wet fractionation is used to produce pea protein isolates (which tend to have a higher protein quantity per 100g compared to protein concentrates).

This process used a lot of water (hence the name!) and the proteins are extracted with the use of an alkali, and then a mild acid is used to separate the protein from most of the residual material. This is then dried to form the powder, after which other ingredients may be added (such as sweeteners, colourings or flavourings).

Isolates tend to have a higher protein content (up to around 90g of protein per 100g of powder), although the large amounts of water and energy required for the processing mean they are less environmentally sound.

Concentrates, in contrast, use a process of dry fractionation which – again as the name suggests – is a process that does not require lots of water. It is essentially a milling process that grinds the dried peas into a powder and then air classification or some other method is used to separate the particles which differ in size, with the majority of the larger carbohydrate and fibre particles being removed, leaving the smaller particles of protein.

Concentrates use less water and energy during processing so are significantly better for the environment, and because the proteins are less processed (with the use of alkalis or acids) some people suggest it is more wholesome. On the flip side, concentrates pack less of a pound-for-pound protein punch, but because they are less concentrated they are generally higher in fibre and some of the micronutrients contained within split peas remain.

Note that it is also possible that a mixture of dry and wet fractionation methods have been used or that some of the protein sources have used one method and others another (for example, when a blend of different plant proteins are used).

Pea protein powder is a popular plant based product that compares well with animal-derived protein powders such as whey. While it doesn’t contain quite as much protein as does whey, pea protein has some key advantages: chiefly, of course, it is vegan! In addition, it is lower in saturated fat and is particularly good for those with allergies to milk products (whey) or soy.