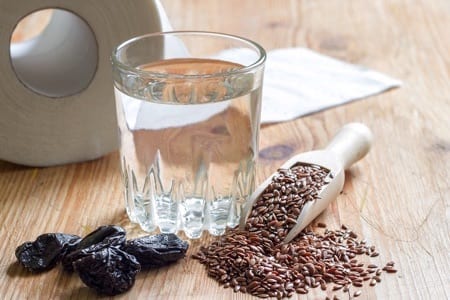 Constipation can be a real pain in the bum (or the bowel for that matter), but if you need to get things moving, the good news is that there are plenty of natural laxatives available to help. And, what’s more, the vast majority of these laxatives are vegan friendly (given that most come from plants) and readily available. Indeed many are already vegan staples, so hopefully you don’t have constipation anyway and are just enquiring for a troubled friend!

In this article, we will explain what laxatives are, why and when they are needed, and run through the various categories of laxatives available, focussing on those that are natural and readily available in most supermarkets.

Scroll down the article for more information about the types of laxatives and when they are required. But if you already know your bulk-formers from your stool-softeners and you just want to find the best natural laxative options to relieve your constipation, let’s get straight to the point. Here are the best (vegan-friendly) natural laxatives there are. 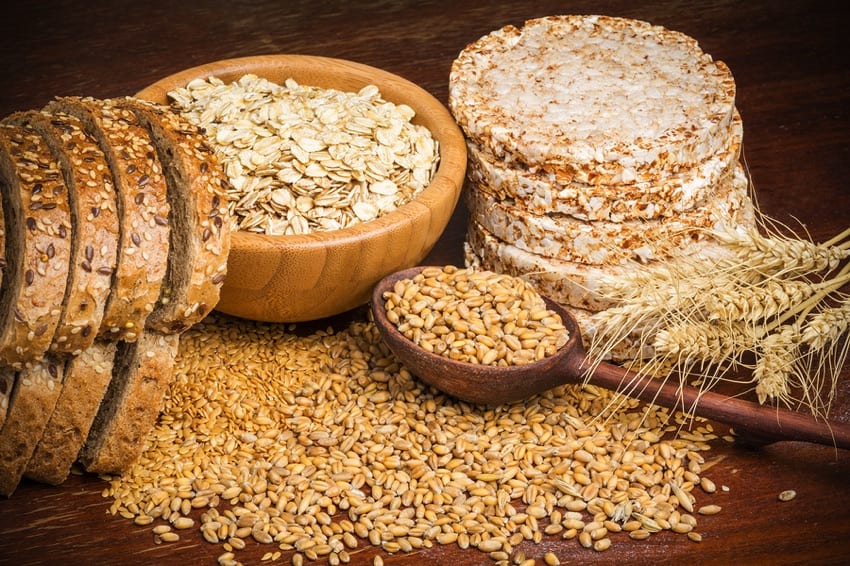 In the table below are some great options to avoid or cure constipation. Note that when it comes to the fibre content of foods, the value per 100g isn’t all-important but is used here for direct comparison. Whilst a standard serving of fruit or bread might be around 80g, for nuts and seeds, it is likely to be far lower, offsetting the fact that these items often have more fibre per 100g.

As you will no doubt have noticed, most natural laxatives mentioned above rely on a significant amount of dietary fibre; but specifically it is the insoluble fibre (contained primarily in things like wheat bran, wholegrain cereals, dried fruits and corn) that have the best laxative effect as they are able to pass through the digestive system without being broken down too much.

This is thanks to the high cellulose content, which also allows them to absorb water, thus increasing the bulk, which in turn helps keep things moving in the right direction in terms of digestion.

What Are Laxatives & How Do They Work?

In case you’ve got this far and you are not quite sure what laxatives are, this section is for you. If something is described as a laxative it means it can be used to treat constipation. That is, it increases the frequency of bowel movements, usually by adding bulk (which speeds up the process naturally), by softening stools and/or by increasing the motility of faecal matter through the bowel. Some types of laxative (as discussed below) act on the gastrointestinal tract itself to stimulate contractions that help the matter move through quicker.

There are various types of laxatives available, as we shall explore in greater detail. In general, in order to create a laxative effective there are two main ways to get the laxative into your body: 1. orally (i.e. though your mouth) or, 2. rectally (i.e. up your behind!). In some medical situations in which a swift-acting laxative is required, suppositories or enemas can be used to administer the laxative directly to where it will be taking effect.

For the purposes of this article, however, we have focussed on the laxatives that are taken orally, whether eaten in the form of fibre-rich foodstuffs, or swallowed as a pill, capsule or liquid. Some of the over-the-counter laxative remedies are classified as “natural” in that they only contain natural ingredients. Some of these can be effective, but often they simply contain concentrations of figs or other fibre-rich ingredients, which can be equally effective (and cheaper) if bought in their natural form. 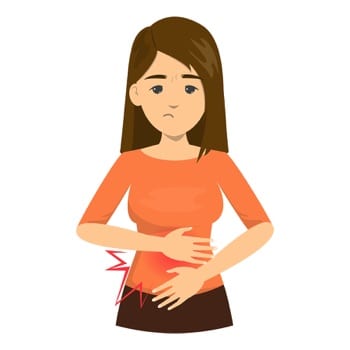 In simple terms, you might require laxatives (or the consumption of food with laxative effects) if you are suffering from constipation – that is, you are not defecating as regularly as you usually do or feel you should be. Constipation could have other effects on a person aside from the irregularity of bowel movements, including bloating and abdominal pain.

One of the most common causes of constipation according to the NHS is a person not obtaining enough dietary fibre through their diet. As we discuss in our Health Reasons to Go Vegan article, a vegan diet is (generally) naturally high in fibre because of the amount of fruit, vegetables, nuts and pulses many vegans eat.

While a lack of fibre in the diet is a common issue, other possible causes of constipation include simply not drinking enough water (or other fluids), a lack of exercise or as a side effect of medication, stress or a change in lifestyle. In such scenarios it is probable that assessing and addressing various lifestyle choices might be a better option than simply seeking out laxatives to relieve constipation. While laxative or foods with laxative effects might bring temporary relief, if someone is (for instance) not drinking enough water, it is likely such symptoms will return. Clearly, if you are concerned about anything in relation to your health, always seek the advice of a medical professional.

Aside from the relief of constipation, there is a medical scenario in which laxatives are often administered to patients; namely, prior to a medical procedure – for example a diagnostic colonoscopy or colon surgery – that would benefit from a minimisation of matter being present in the colon. In such a scenario, it would generally be the case that a patient would be given a fast-acting medical laxative (rather than a bowl of prunes!).

According to the NHS website, there are four main types of laxatives:

As the name suggests, this type of laxative simply increases the amount of matter in the bowel which stimulates it to get things moving a little faster. It also serves to increase the softness of stools by helping to absorb extra water in the intestines.

This is the category into which most (but not all) natural laxatives fall. Relying on bulk-forming laxatives can mean it will take two or three days for the effects to take hold and the constipation to ease.

Osmotic laxatives (also sometimes referred as hyperosmotic laxatives) work by attracting water to the bowel from other areas of the body through (as the name suggests) a process called osmosis. The additional water drawn into the bowel serves to soften faecal matter, which makes it pass through the body quicker. Given that water is drawn from other areas of the body it is important that people using osmotic laxatives ensure they drink plenty of water to ensure they do not become dehydrated.

Seen as a slightly more extreme (and faster acting) form of laxative, stimulant laxatives have a direct effect on the intestinal lining, causing an acceleration of the movement of matter through the colon.

Often the laxative of choice for those recovering from childbirth or who have haemorrhoids, stool-softening laxatives are another that are aptly named to describe what they do – in this case by lowering the surface tension of the stool matter in the body, thus allowing more water to penetrate into it to create a softer poo.

Other Types of Laxatives

In addition to the four categories outlined above, other categorisations of laxatives (for instance those mentioned in an article entitled Medical Management of Constipation that was published in the Clinics in Colon and Rectal Surgery journal), include the following:

This type of (often oil-based) laxative has the effect of adding a layer of lubrication between the intestinal wall and the matter contained within, the result of which is to promote a smoother passage of said matter towards, well, ultimately, the toilet!

The aim of such agents is induce contraction in the gastrointestinal tract and hence increase the flow so that you need to go to the toilet sooner rather than later.

Natural Does Not Necessarily Mean Safe

Note that just because a product is marketed as “natural”, it does not guarantee that it is safe and free of possible side effects. After all, cyanide occurs naturally in many plants, including in apricots, apples and peaches, but if you see it amongst the list of ingredients on anything you were planning to eat, you should really give it a miss!

Take Aloe Vera as an Example

One example of a natural laxative that might not be all it’s cracked up to be is aloe vera. Many people will be familiar with aloe vera for its clear gel that has various uses as treatments for burns (including sunburn), skin rashes and even insect stings and bites. Though the gel is thought to have some laxative properties, it is the yellow latex that can be obtained from the aloe vera plant that particularly interests us here: it reportedly has a pronounced laxative effect when consumed; this is (according to an article published in the Indian Journal of Dermatology) primarily due to the anthraquinones it contains which increase the water content in the intestine and also stimulates intestinal mucus secretion… in short, it should help relieve constipation.

The problem is that, while the gel is considered generally safe, in 2002, the US Food and Drug Administration (FDA) banned products made with aloe from being sold as over-the-counter laxatives. This is because the producers were unable to provide enough evidence relating to the safety of the products.

Furthermore, some research has pointed towards potentially harmful effects of consuming aloe vera in some cases, including a study that shows evidence of carcinogenic activity in rats that were fed whole-leaf extract of aloe vera. Others have suggested that aloe vera latex, specifically, could cause damage to the kidneys if too much is consumed. Aloe vera tablets are still on sale in the UK as laxatives at the time of writing, but it’s certainly worth checking out the research if you are considering taking any.

All we are trying to highlight here is that while something natural can often be preferable (for environmental, as well as health reasons) to something synthetic or chemical, it is not true that this is always the case. In short, always research any unfamiliar substance or product you plan to put in or on your body, even if it is labelled as natural!

Many Vegan Foods Are Natural Laxatives 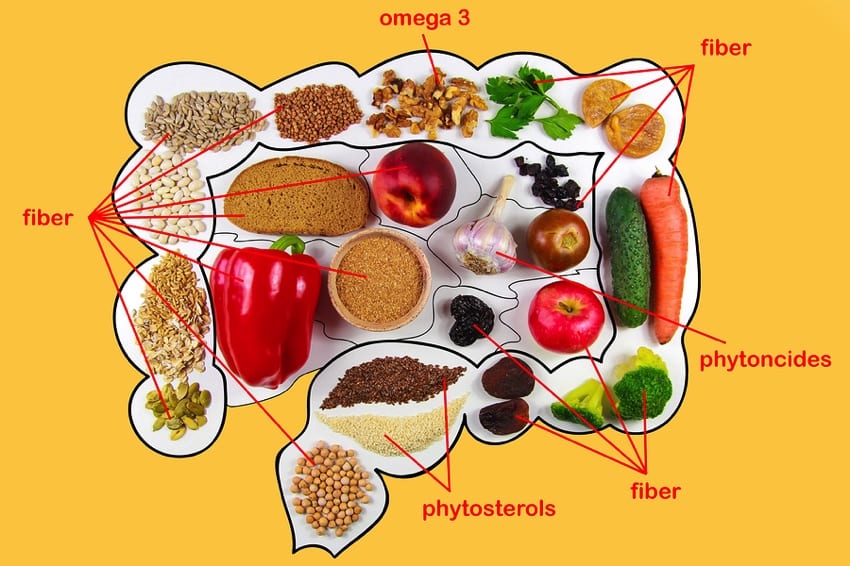 With so many fantastic vegan foods available that are high in fibre and hence are natural laxatives, those following a well-balanced vegan diet are unlikely to suffer from constipation too often (assuming there are no other medical complications that could affect digestion). For those who are looking for a way to speed up their digestion or relieve the symptoms of constipation, the first course of action would simply be to consume more fibre-rich foods (such as those listed in the table at the top of the article), drink plenty of water, and remain active.

If, after a couple of days, symptoms of constipation persist, it might be a good idea to seek medical advice, especially if there are any underlying health conditions that might be affecting things. If they recommend particular laxatives, whether natural or not, it is always a good idea to follow the advice of medical professionals. If you are feeling constipated, or if you are taking any measures to alleviate symptoms of constipation, it is always advisable to make sure you are drinking enough water and to stay properly hydrated.

In the absence of any other medical conditions, though, the best course of action appears to be simply to tuck into the tasty vegan staples that are naturally high in fibre and hence will help keep you regular. For instance, if you rustle up a salad made up of leafy greens, prunes and chia seeds, add and generous splash of olive oil and have it with a slice of high-fibre bread and a nice cup of coffee and you’ve got yourself a tasty meal that is extremely healthy and can act as a natural laxative. Good luck!