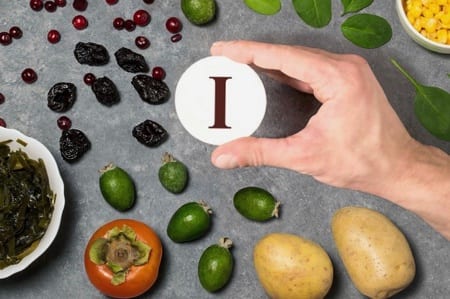 Iodine is a trace element, which means we require only very, very small amounts. The recommended nutrient intake (RNI) of iodine in the UK is 140 micrograms (μg) per day for most adults. To put that in a way that is easier to understand, 1 gram is equivalent to 1,000,000 micrograms and we need around 50g of protein and 30g of fibre. If you want the maths made even clearer, whilst you need 140μg of iodine each day to stay healthy, you need 30,000,000μg of fibre!

So, given this miniscule iodine requirement – the mass of around three eyelashes! – surely everyone in the UK, vegans and non-vegans alike, is getting enough, right? Well, as we discuss in our feature on vegan supplements and vitamins, there are some nutrients that are harder for vegans to obtain than others. Iodine is certainly a supplement that many vegans take or have considered taking, but there are some good vegan sources of iodine so it isn’t necessary for everyone.

Iodine is most usually associated with non-vegan foods, chiefly fish and seafood, and also milk and other dairy-based products, such as cheese. However, one of the richest sources of iodine is actually vegan friendly. Edible seaweeds and other sea vegetables are actually so high in iodine that one has to be careful not to consume too much. There are also a number of other plant-based foods that contain at least some iodine, whilst iodised salt (essentially salt with added iodine) is also one way to get iodine into your diet.

The levels of iodine in the fruit, veg and grains in which it is found vary according to the iodine levels in the soil. However, in general, even in the relatively iodine-rich soil of the UK, these are not sufficient for vegans eating a “normal” diet to reach the RNI for iodine. We have seen some websites list various fruits and vegetables as being good sources, however, according to Public Health England’s nutritional database, this isn’t the case.

The list below contains shows some supposed vegan iodine sources, along with the percentage of the RNI in a typical serving.

Wholegrains and cereals are also often listed as good sources of vegan iodine but this isn’t backed up by reliable nutritional information. The National Health Service lists only sea fish and shellfish as being good sources, whilst stating that:

Iodine can also be found in plant foods, such as cereals and grains, but the levels vary depending on the amount of iodine in the soil where the plants are grown.

In a similar way the British Dietetic Association (BDA) lists almost exclusively animal-derived foods on its sources of iodine. The only vegan foods listed are bread, with a single slice said to contain approximately 5μg of iodine (around 3.5% of your daily RNI), fruit and vegetables in general (listed as containing around 2% per 80g serving) and nuts.

The BDA’s limited information claims that nuts will provide 5μg of iodine per 25g serving, which is around 3.5% of your daily requirement. However, a closer look at more detailed information shows that whilst some nuts, especially Brazil nuts, hazelnuts and peanuts, are decent sources of iodine, not all nuts are. For example, almonds, macadamia nuts and pecans offer little or no iodine.

Seaweed: Vegan Iodine Champion or Too Much of a Good Thing? 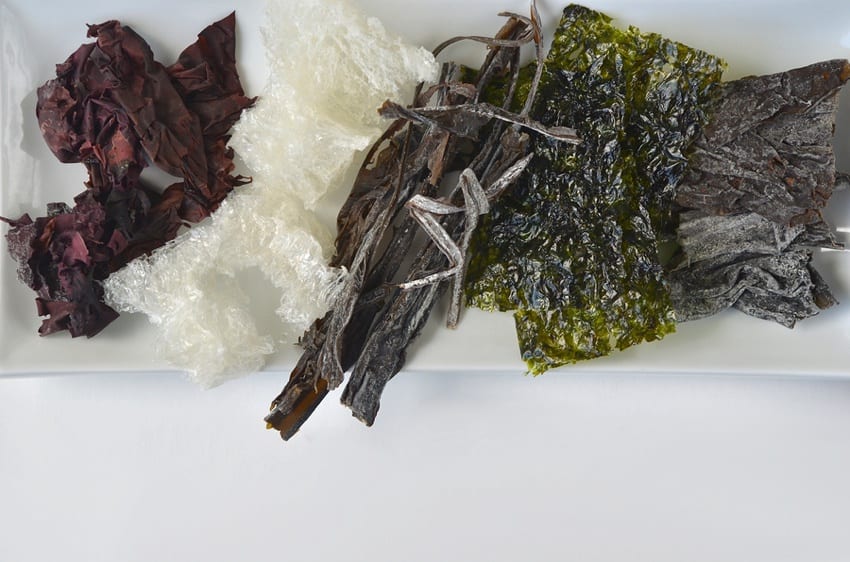 The only vegan source of iodine which can really be relied upon to guarantee high levels of this mineral is seaweed, and other sea vegetables. Many of these foods are not covered by authoritative sources of nutritional information but almost all edible plants that grow in the sea are packed with iodine. The question is, do they pack too big a punch?

So high in iodine are some seaweeds and kelps, especially brown ones, that the British Thyroid Foundation (BTF) states that supplements containing these foods “often contain excessive amounts of iodine, even if taken within the dose recommendations on the label”. The BDA state that:

Seaweed is a concentrated source of iodine, but it can provide excessive amounts (particularly so in the case of brown seaweed such as kelp) and therefore eating seaweed more than once a week is not recommended, especially during pregnancy.

The issue with seaweed, as with all plant-based foods, is that the iodine levels can vary greatly. In most plants, where iodine levels are low, this variation isn’t too much of an issue. However, when it comes to seaweed and related foods, which absorb iodine from the seawater in which they grow, it can mean the upper levels of iodine can be very high. As we will discuss later, iodine is vital to the healthy functioning of the thyroid but too much can also be very damaging, causing the same issues as a deficiency, as well as a host of other health problems too.

Limiting consumption of such foods may be wise and avoiding brown seaweed is also a good idea as it is this in particular that is likely to have too much iodine. According to the US Department of Health & Human Services’ National Institutes of Health, “the iodine content of different seaweed species also varies greatly”. According to their information, just one gram of seaweed can have anything between 16μg and a whopping 2,984μg of iodine.

Which Seaweed Can I Eat?

The issue of seaweed is tricky as the research around it is relatively limited. In small quantities, it is probably a good addition to a vegan diet, especially if you avoid the highest-iodine varieties. In general, any seaweed with the word “Laminaria” in its name is likely to be very high in iodine and these kelps should be avoided unless properly prepared.

Wakame is lower in iodine but can still contain enough to potentially be harmful. Nori, perhaps the type of seaweed with which those in the UK are most familiar, contains the least iodine. Nori is the seaweed used to wrap many sushi rolls and should not pose any harm. The BTF claim in their Iodine FAQ article that, “The iodine concentration in a portion of sushi (190g) at 17-38μg would not therefore give excess iodine.”

If any of this has you concerned about eating seaweed, which is in fact often highly nutritious, it is worth noting that Japanese people consume huge (relatively) quantities of it without any serious issues we have encountered. Japanese iodine intake is thought to be between 1000μg and 3000μg per day according to a 2015 study by the Japanese government. The UK Food Standards Agency suggests an upper limit of 500μg per day and so it would seem few in the UK are likely to have issues with eating too much iodine.

Overall, we feel that many vegans would benefit from including some seaweed products in their diet. Consulting a doctor or trained nutritional professional may be wise, however, given the variable levels of iodine within such products, but in general, nori can be seen as safe, with brown kelp best avoided by most people.

We cannot provide nutritional guidance to the entire vegan population. This is simply because one person’s vegan diet can differ so greatly from another’s. However, of all the nutrients humans need for good health it certainly seems that iodine is one that vegans are most likely to struggle to obtain.

Iodised salt is not widely available in the UK but may be a good option for some people and is available to buy online. For those who consume a lot of salt in processed foods we would not recommend it and given there can be lots of hidden salt in bread, cereals and other foods, that includes more people than one might realise.

However, for those whose diet is relatively low in salt and the bulk of the salt they consume is added to home-cooked food or at the table, iodised salt could offer an excellent way to boost iodine intake without sacrificing other aspects of their health. The level of iodine in such salts varies but 45μg of iodine per gram is fairly typical. At this level, you would need to add less three grams of salt to your food in order to reach the RNI (assuming a small intake from other foods) and this should be achievable whilst staying within the recommended maximum intake of 6g of salt per day overall.

If you don’t want to buy iodised salt or feel you consume enough salt in other parts of your diet then supplements may be a good idea. As said, quite simply, almost all the most common sources of iodine are animal based and overall statistics suggest vegans do not reach the RNI for iodine.

Average Iodine Intake in the UK

The FSA quotes research from 2000-2001 that showed that iodine intake in the UK was at a very healthy 186μg per day. Even within that healthy average though, it is now believed that some school girls and also pregnant women (who need more iodine) may be deficient. The BBC reported that more than two thirds of teenage girls may be deficient.

Moreover, the FSA also state that, “low average intakes of about 80μg per day have been found in vegans”, whilst the BDA confirm our statement above in their iodine factsheet when they say “Vegetarians and particularly vegans are at risk of iodine deficiency”.

Relatively high levels of iodine are found in dairy milk but unlike calcium and certain vitamins which are routinely used to fortify vegan milk alternatives, iodine is not added to the vast majority of vegan milks.

In conclusion, and speaking generally, it would seem likely that many vegans are not consuming enough iodine for optimal health. However, there is nothing to suggest that vegans are significantly deficient in a way that is seriously impacting their health. The US National Library of Medicine National Institutes of Health quotes a 2011 study in Boston that showed vegans did indeed have lower levels of iodine in their systems but that markers of thyroid health and functionality were broadly the same as in the non-vegan population. 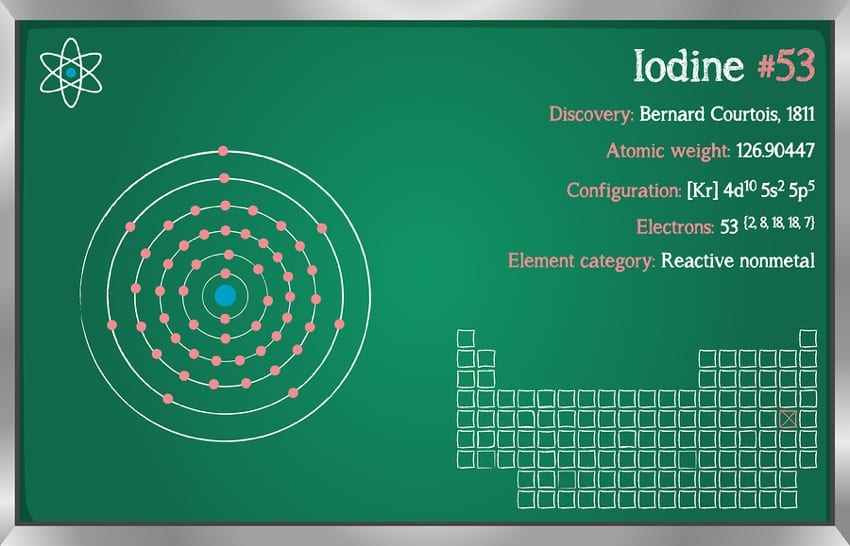 Iodine, as we have touched on, is a mineral and it is also a chemical element. It has the chemical symbol I and atomic number 53 and, according to the World Health Organization, deficiency of this essential mineral is “greatest single cause of preventable brain damage”.

The NHS state that, “Iodine helps make thyroid hormones, which help keep cells and the metabolic rate (the speed at which chemical reactions take place in the body) healthy.” Correct iodine levels are essential to thyroid health and unusually too little has very similar effects to too much.

Issues from a Lack of Iodine

A goitre is often the first sign of an issue and means the thyroid gland has become swollen. This isn’t always down to iodine. A goitre becomes apparent by a swelling at the bottom of the neck and is caused by either an over- or under-active thyroid. There are various treatment options available and a goitre in itself isn’t usually a major concern.

However, if someone is not getting the right amount of iodine over a sustained period then serious problems can occur. Hypothyroidism can lead to weight and cholesterol increases, whilst hyperthyroidism can increase the metabolism and lead to damaging weight loss.

Pregnant women are particularly susceptible to problems and, as said, need higher levels of iodine (around 200μg per day). Stunted foetal development can occur, as can a host of other developmental issues, meaning vegan women who are pregnant should pay particular attention to their iodine levels.