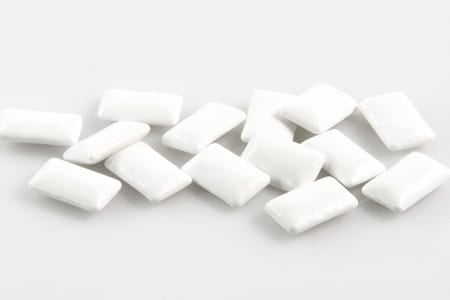 Of all the foods and drinks that vegans, would-be vegans and those hosting vegan guests may be concerned about, chewing gum is not really too high on the list. None the less, many people are unsure whether or not chewing gum is vegan and so we’ve added it to our main Is it Vegan? section.

Chewing gum isn’t a key part of any diet that we’re aware of, so it isn’t something likely to be a huge loss to any vegan if it turns out it has to be abandoned. Even so, whether you chew to freshen your breath, help with dental hygiene, out of habit, as part of your Sir Alex Ferguson impression, to blow bubbles or simply because you like it, knowing more about why it might or might not be vegan will be of interest to those following a plant-based diet. Note that in this article we are looking at chewing gum and bubble gum, not gum-based sweets that are designed to be chewed and swallowed.

What Are the Ingredients in Gum?

If you asked most people what was in gum they would probably look fairly blank and perhaps hazard a guess at sugar, sweeteners, flavourings and a few E numbers. Sounds tasty so far! The main component is actually some form of gum base, although this is usually made up of a cocktail of various unusual natural and/or synthetic materials that you are unlikely to come across in the supermarket.

Most ingredients within the majority of gums are vegan friendly but, as ever, it only takes the smallest quantity of an animal product or derivative, either as an ingredient or used in the manufacturing process, to render any chewing gum non-vegan.

Which Brands of Chewing Gum are Vegan?

As with many food and drinks we have looked at, the answer to the question “is chewing gum vegan?” can be summarised as “often it is… but not always”. We’ll look at what can make gum non-vegan friendly shortly, as well as how you might be able to ascertain whether or not your favourite brand is vegan or not.

For now though, we’ll make things nice and easy by listing some key brands of chewing and bubble gum that are vegan. As ever, this comes with the caveat that manufacturers may change their ingredients or processes but equally that nowadays it is unlikely for a vegan brand to switch to become non-vegan.

Chewing Gum Brands That Are Not Vegan

At the time of writing, there are some chewing gums that are not vegan. These may well change to become plant-based so if your favourite is on the list below then it could be worth checking with the manufacturer. If not, just stick to one of the great vegan gums listed above.

Why are Some Chewing Gums Not Vegan? 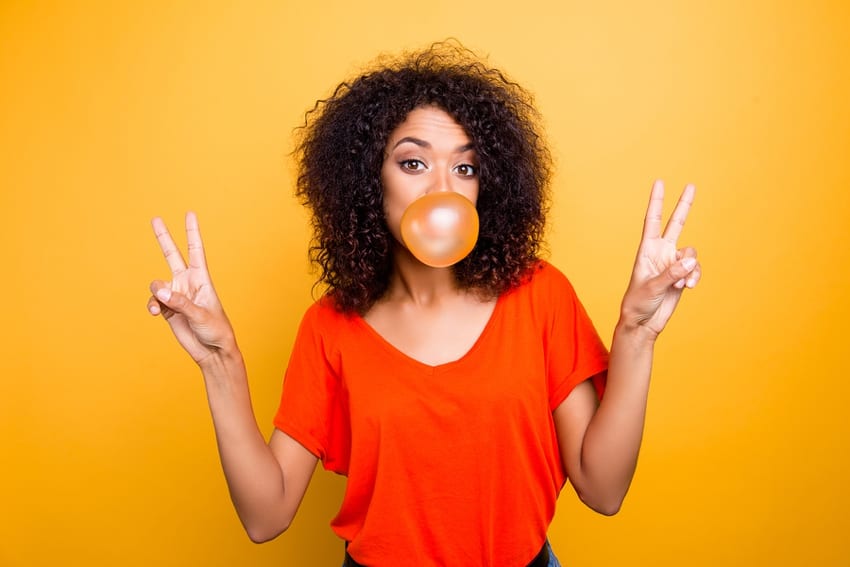 As you can see from the lists above, as is so often the case, the waters of veganism are muddy and many popular UK and global brands bring out some products that are vegan and some that are not. That means that knowing how to discern whether a gum is vegan or not is crucial, especially as most brands do not clearly label their products one way or the other. Many that are vegan friendly may still be marked as suitable for vegetarians (leaving vegans guessing!) or simply may not be labelled at all.

Gelatine is one of the better-known vegan baddies and is a collagen product that is derived from various parts of one or more of any number of animals. Much gelatine comes from the hooves, skins, hide and bones of pigs and cows. Whatever part of whatever animal it comes from, when it is added to a gum or other foodstuff, it renders the finished product unsuitable for both vegans and vegetarians.

Gelatine is used to give the gum texture and as a binding agent to help shape “pellet” type gums. Gelatine is used in a wide range of sweets, especially chewy or gummy ones but, thankfully, it is usually very clearly marked on the ingredients list, so should be easy enough to spot and avoid.

Carmine is a red food dye derived from the cochineal insect. Just to keep us on our toes, it can be listed on the ingredients in a number of different ways, including simply carmine but also the following: crimson lake, carmine lake, natural red 4, carminic acid, cochineal, cochineal extract or by its E number, E120. And, to really keep us on our toes, its Colour Index International number is c.i. 75470. Got that?

If committing all that to memory seems a little tough, the advice we offer in relation to any foodstuff applies. Is something is an unnatural, bright, crimson red, check the label more carefully and email, Tweet or call the manufacturer if necessary. Just to make things even more complex, some red gums use an alternative dye that also has various names and is actually plant based.

E129 has been linked with various health issues and is being phased out in the UK, whilst being illegal in other countries. You might want to avoid it on those grounds but it is vegan and may also be listed as: Allura Red AC, FD&C Red 40, c.i. 16035, Red 40 Lake or Red 40 Aluminum Lake.

Glycerine is one of those tricky ingredients that can be made from both plants and animals. It may be listed as glycerine, glycerine or glycerol, or as E422. It is usually used as a sweetener and often alongside another sweetener, xylitol.

Being sure how the glycerol has been made is tricky, with production from soy beans and other plant sources possible, as well as synthetic means and also from tallow, which is animal fat. Thankfully, some chewing gums will clearly state that it has been derived from plants (usually soy). Otherwise, unless the gum is clearly marked as vegan, it may be best to check directly with the producer.

Stearic acid is naturally occurring in chocolate and it is an additive to some chewing gums. Like glycerine, it can be produced from both animals and plants, and although it generally occurs in high quantities in animal fats, cocoa butter – used in chocolate – is a key exception.

Stearic acid may sometimes be listed as E570, which is the E number for fatty acids and, in gum, is usually used as a thickener and also to increase the gum’s flexibility and plasticity. As with glycerine, unless the ingredients state it is derived from plants, or the gum is vegan certified, it is probably best to assume it is non-vegan.

Lecithin is another item to look out for on any ingredients list and once more someone trying to stick to a vegan diet has their lifestyle complicated by the fact that it can be made from both plants and animals. It was initially isolated from eggs, the name coming from the Ancient Greek for egg yolk.

Used in a range of foods, including chocolate, bread and vegan butter substitutes, lecithin can be made from soy, rapeseed and sunflower but also from animals products, such as milk and, of course, eggs.

It is used as a softener in chewing gum in a similar way to stearic acid. Also, like stearic acid (and glycerine), you must check the packaging to see if it has been obtained from plants (often soy) or animals. Note it may be listed as E number E322 and unless its origins are stated you should contact the manufacturer.