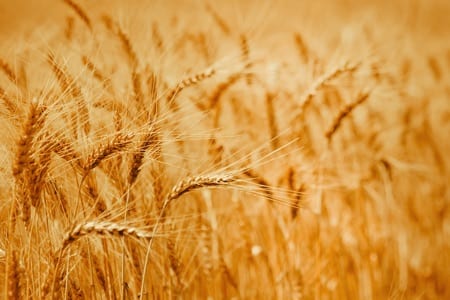 When it comes to many things in life, keeping abreast of the latest trends, information and terminology is sometimes a little tricky. The pace of life is fast and what is designated a “fact” one day may be called “fake news” the next. A phrase that was once okay to utter can quickly become unacceptable, and words or concepts that were once very niche can rapidly become mainstream.

The point is, if you’re confused about gluten, or veganism, or how the two are related – or not – we get it. So, without further ado (consider ado now done), let us look at all the vegan gluten questions you may have (and answer all your gluten-based vegan queries, as well)!

We’ll start right at the very beginning and in so doing we may well automatically answer a lot of the other questions you might have. What is gluten? Well, gluten is essentially a generic name for the protein found in wheat and some other grains. According to the Celiac Disease Foundation (celiac – sometimes spelled coeliac – disease is an extreme form of gluten intolerance that we will discuss in more detail later) it may be present in a wide range of items, including the following forms of wheat and other similar cereals:

Gluten takes its name from the Latin for glue and is elastic in nature, lending a chewy texture and bite to breads and other baked goods. Most flours contain gluten, so many baked items also do, though really any food or product that is made from any of the cereals listed above will normally have at least some gluten in it.

Gluten has a range of uses but is normally a naturally occurring element in foods made using flour or the grains listed above. Because it is naturally occurring, it is not derived from animals and therefore is indeed vegan friendly. The reason more people are now aware of gluten is due to the rising incidence of coeliac disease and the fact that many, rightly or wrongly, believe they are intolerant of it.

When it comes to understanding veganism we would think you probably have a good idea what’s what. In short, vegans do not eat or use any animal products, or those that use animal-derived ingredients in their processing. In addition, they avoid any food or activity that exploits, harms or endangers animals, as far as is possible. For more information on this take a look round our site, in particular the VeganFriendly.org.uk homepage.

Both veganism and an awareness of gluten have risen dramatically in recent years and we rather suspect this is why some people may get them confused. Hopefully now you know what both are your questions are answered but let’s go into more detail just in case!

In truth, there is no real link between the two, even if we expand the meaning of “gluten” to include the concept of going gluten free or being gluten intolerant. In other words, you can be a vegan and eat gluten, or you can be a vegan and not eat gluten. Alternatively, you can be gluten intolerant and be either vegan or not vegan. Lastly, and we think we’ve now covered all bases, you can be someone who consumes a lot of gluten and do so on either a plant-based diet or one that includes a lot of meat and other animal products.

Can You Be Vegan & Gluten Free? 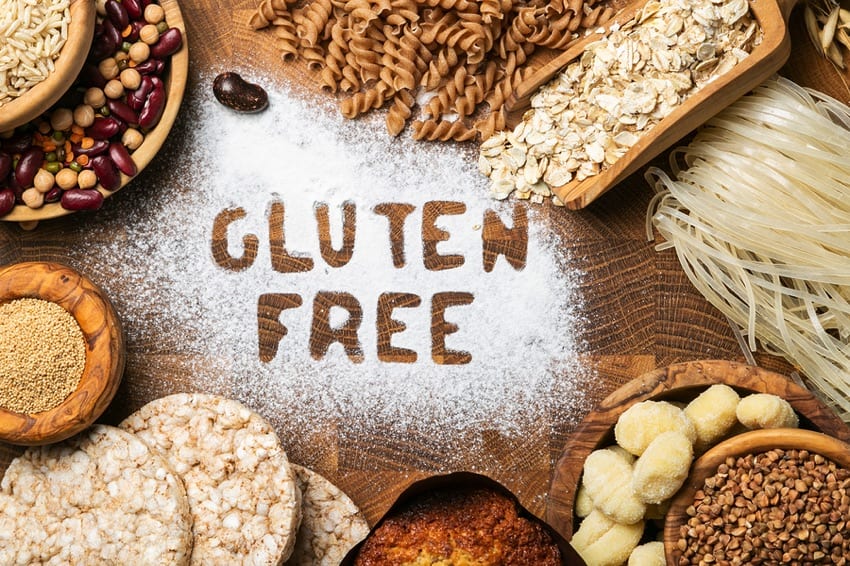 Having said all that, whilst a vegan diet and a gluten free one are not the same thing and do not have to go together, they are two separate eating regimes than can be combined. In the same way you can be raw vegan, paleo-vegan or be on a low carb vegan diet, you can also be a gluten free vegan.

The concept is simple enough and means someone who eschews animal products – including dairy, eggs and anything processed using animal derivatives – and who also avoids gluten. Whilst all of the base foods that are highest in gluten – cereals and grains – are vegan, there are still lots and lots of gluten free, vegan foods available. 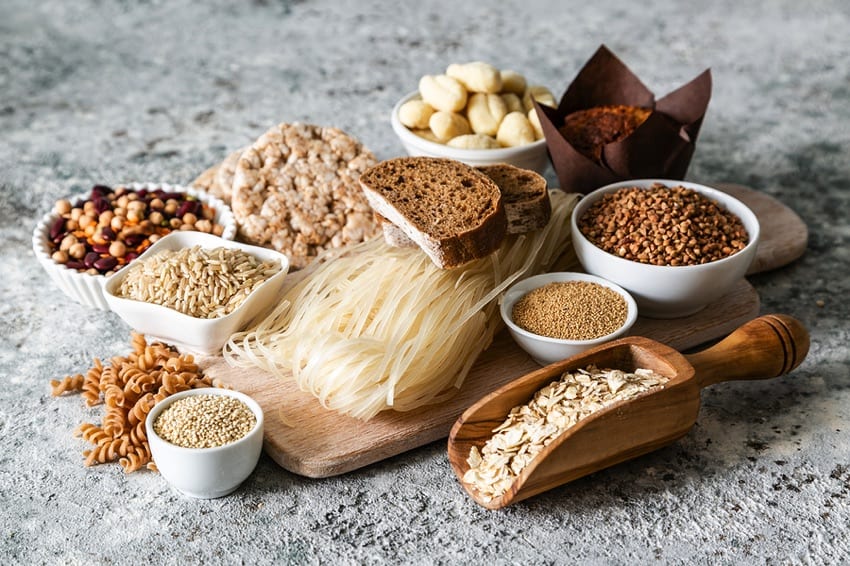 To those who have no restrictions on their diet, being either vegan or gluten intolerant would be a major inconvenience. Therefore many assume that combining both into a doubly restricted eating regime would leave little to enjoy. This isn’t the case though and there are many foods that tick both boxes, albeit that some gluten free vegans opt for suitable vegan supplements in order to make sure they get all the nutrients necessary.

Examples of Foods You Can Eat

The following list gives you just an indication of the sort of foods you can enjoy on a vegan gluten free diet:

As you can see, many vegan staples are also gluten free and through legumes, nuts, seeds, tofu and other soy-based foods, there are loads of great sources of vegan protein too. There is one vegan protein that is very much off the table though…

Seitan Is Satan to Those Avoiding Gluten 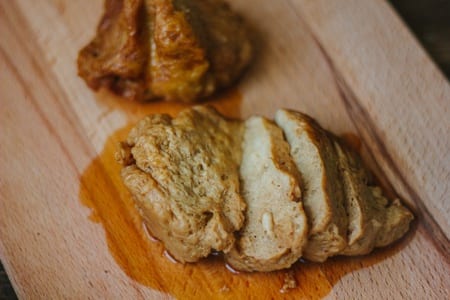 Our dedicated article about seitan tells you everything you need to know about this excellent vegan meat substitute. We say “excellent” but for anyone who is looking to avoid gluten that is definitely not the appropriate word. Seitan is made from vital wheat gluten and this itself is made by washing away starch and other substances from wheat flour so what is left is more or less pure gluten.

Whilst seitan is often made with flavourings and seasonings as well, the vast majority of its mass is pure gluten, making this one vegan item that is absolutely not suitable for those on a gluten free diet.

There is no ethical or environmental issue with gluten as far as vegans, or anyone else is concerned. People who choose to avoid these proteins do so for purely health reasons. Coeliac disease, mentioned earlier, is a very serious illness whereby eating gluten causes a sufferer’s immune system to attack them, damaging the small intestine.

According to the UK National Health Service, symptoms include the following:

Coeliac disease cannot be cured but can be very well managed by entirely avoiding gluten. If not recognised and a person continues to eat gluten, serious complications can arise, including osteoporosis, anaemia and vitamin B12 deficiency. Less commonly, it has also been linked to a number of cancers, including bowel cancer.

Whilst many of these symptoms are common and will be experienced by just about everyone at some stage in their life, if you think you may have coeliac disease you should see your doctor as soon as possible. If you experience some of the symptoms above and they do not go away then you should definitely seek help, especially if you have a relative with coeliac disease.

Thankfully, coeliac disease is relatively rare, although it is thought to affect more than 1% of the UK population. Indeed, incidence may be much higher than that as according to the NHS “some experts think this may be underestimated because milder cases may go undiagnosed or be misdiagnosed as other digestive conditions, such as irritable bowel syndrome (IBS)”.

Gluten intolerance, or at least perceived gluten intolerance, is far more common. Some reports and estimates suggest as many as eight million people in the UK are gluten free, whilst others put the figure slightly lower at around one in 10 of the population.

There is a significant amount of debate about what is termed non-coeliac gluten sensitivity. Some feel that many avoid gluten when they don’t really need to, whilst others argue that intolerance and sensitivity, whilst nowhere near as bad as coeliac disease, are very real issues.

It is not hugely relevant to this piece, from a vegan perspective, to go into more detail about this discussion. Once again though, if you think you are gluten intolerant, we would suggest visiting the doctor rather than attempting self-diagnosis and radically altering your diet.

We have hopefully made this pretty clear but to reiterate, not eating meat and animal products is an entirely separate thing to not consuming gluten. Just because a person is vegan, doesn’t mean they can’t eat gluten, with the same applying the other way round. And just because an item is vegan, it doesn’t also mean it is gluten free; once again, this also applicable in reverse.

Whilst veganism and gluten free are unrelated, they can be combined into a single eating regime. As we have illustrated above, a vegan, gluten free diet offers lots of great, nutritious foods, all of which are naturally part of a healthy vegan diet anyway.