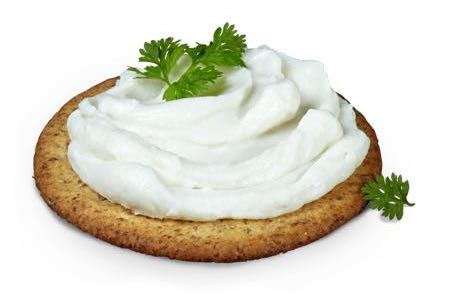 In an ever changing vegan-friendly world, there are plant-based alternatives to a growing number of food products and this is very apparent when it comes to the many products made from dairy milk. From plant-based milks to vegan ice cream and even things like vegan halloumi, those people who’ve chosen to eradicate animal products have more choice than ever. But, how about vegan alternatives for cream cheese?

The good news for vegans is that there are several good quality plant-based cream cheese options. Some are made by companies with whom you might well be familiar (such as Oatly and Violife) and some are a little more artisan. We’ll run through the main vegan cream cheese options shortly, but first we’ll clarify what cream is and why – when made from dairy milk – it’s not vegan (hint: it’s made from dairy milk!).

Check Out Our Article on Vegan Cheese

Cream cheese is a soft, spreadable cheese that (when not vegan) is usually made from a mixture of milk, cream and stabilisers, such as locust bean gum or guar gum. It a versatile food that can be used as a fine accompaniment to Rivita (most of their main products are vegan but not all), bagels, toast, soup, pancakes or as a cooking ingredient, including in desserts, such as cheesecake.

The obvious reason that conventional cream cheese is not vegan is because – surprise, surprise! – milk is not vegan. Unlike many other types of cheese, rennet (fluids obtained from the stomachs of calves after slaughter) does not tend to be used to produce cream cheese hence it is generally classified as suitable for vegetarians (though obviously not vegans).

In this section of the article, we’ll run through the details of the most popular vegan-friendly cream cheese options that are available in the UK. Some of them, such as Violife and Oatly, might well be available in your local large supermarkets. Others can be obtained from more specialist retailers, such as TheVeganKind Supermarket or GreenBay Supermarket.

Note that the ingredients and nutritional information is correct at the time of writing and is subject to change as the producers see fit. If you have any particular allergies, please check the label of the product you are buying to ensure there is nothing in there that could cause you problems. Here are the products we’ll be covering: 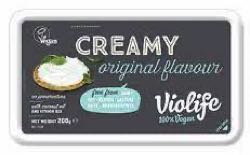 When it comes to vegan cheese, Violife are one of the leading players. They are the go-to brand for many consumers and professional caterers seeking reliable and dare we even say tasty vegan cheese products. At the time of writing, they have four options in their Creamy range of cream cheese alternatives: Original, Garlic & Herbs, Cheddar Flavour, and Creamy with Hot Peppers. Here we’ll give the nutritional values and ingredients for the Original product.

They use a decent amount of coconut oil to help give a smooth and creamy texture to the “cheese”. The downside is that it ups the saturated fats levels somewhat. But – as we explain below – the saturated fats found in coconut oil might not be as bad for you as those found in dairy products (though the evidence is not exactly conclusive as things stand so don’t hold us to that!). 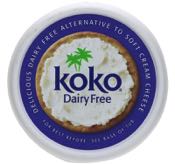 Koko are all about coconuts and, as with Violife, they utilise coconut oil in their dairy-free cream cheese to ensure a consistency that is very close to that found with “real” cream cheese. Unlike some other brands, Koko only have one cream cheese option, but the company also produces a cheddar cheese-style block, vegan yoghurts and coconut-based milk alternatives.

Oatly are now one of the big players in the plant-based milk (and related products) market, so it should come as no surprise that they’ve produced an oat-based cream cheese substitute. Along with oats, they achieve the creamy texture by incorporating coconut oil and rapeseed oil and the results are good.

No Whey! Plant Based Cream Ch!ese

Cambridgeshire plant-based dairy No Whey has produced a fermented cashew milk and coconut oil cream cheese that comes in two flavour options: Original or Garlic and Herb. The nutritional info and ingredients given below are for the Original flavour.

They are not as widely available as many of the vegan cream cheese options we feature but they can be purchased from TheVeganKind Supermarket, GreenBay Supermarket and Planet Organic. They are higher in protein than many of the other vegan options listed here due to the use of soy protein. 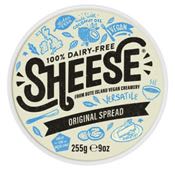 This vegan cream cheese – or “Sheese” – is made on the Isle of Bute off the west coast of Scotland, hence the name of the company, Bute Island Foods. Made using coconut oil and soya protein, among other ingredients, they offer six cream cheese-style Sheese options at the time of writing: Original Spread, Cheddar Style Spread, Chive Spread, Garlic & Herb Spread, Spring Onion & Cracked Black Pepper Spread, or Sweet Chilli Spread.

We’ll give the nutritional information and ingredients for the Original Spread option below. This is available from TheVeganKind Supermarket and one or two other outlets. 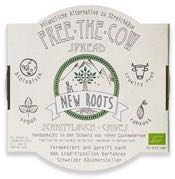 Switzerland has its fair share of revered cheeses and Switzerland-based New Roots have added some fine plant-based cheeses to the mix. They create their products from organic cashew nuts (that they source from a farm in Indonesia that they say has an excellent human rights record and employment conditions).

Their Free The Cow Spreads come in four varieties: Garlic & Herbs, Chives, Tomatoes & Basil, and Horseradish. The information below is for their Garlic & Herbs option. They are available to order from TheVeganKind Supermarket.

One of the higher-end options comes from artisan “cheese” maker, Tyne Chease. With the inclusion of probiotics and almost 73% cashew nuts (with water and Himalayan pink salt being the only other ingredients), they have certainly gone for a basic but very effective recipe.

At the time of writing, they offer five varieties: Original Creamed, Dill Creamed, Garlic Creamed, Smoked Creamed, and Chives Creamed. They are not the cheapest at almost eight quid a jar, but for those seeking something a little more extravagant they could be worth sampling. They are available to purchase at TheVeganKind Supermarket. Due to the very high nut content, these are higher in protein than many alternatives but also higher in fat and calories.

What Is Vegan Cream Cheese Made From? 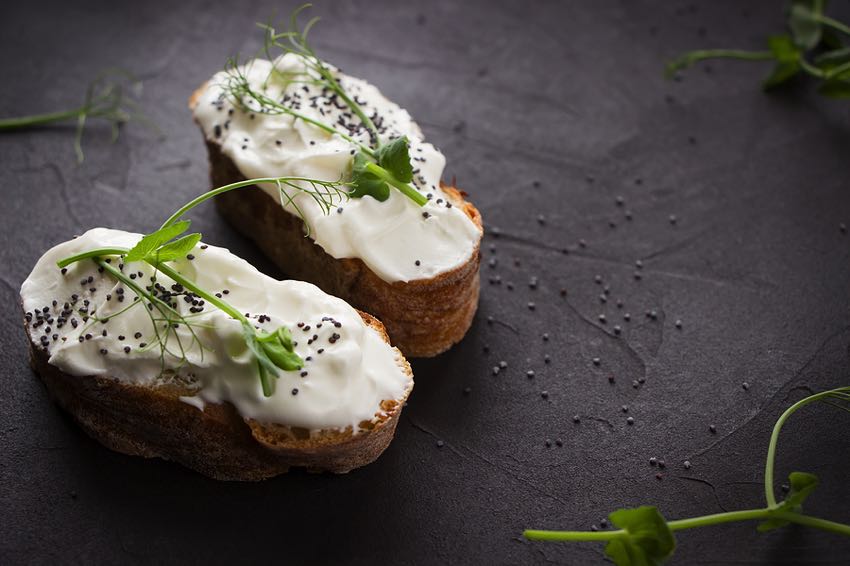 As with other types of vegan cheese, vegan cream cheese is made from a variety of ingredients. As with vegan halloumi, however, the main ingredients of those mentioned tend to be either coconut oil or cashew nuts, with Oatly using oats (alongside coconut and rapeseed oil). Which of these ingredients is used will have a significant effect on the nutritional makeup of the end product.

Those that utilise coconut oil will tend to have levels of saturated fats that are similar to cream cheese made from dairy milk. There is some evidence to suggest that the saturated fat found in coconut oil could be healthier than the fat in dairy products, but the jury is still out on that one.

The vegan cream cheese options that use cashew nuts instead have lower saturated fat levels and higher quantities of vegan protein than those that use coconut oil. Whatever the main ingredient used, other ingredients, such as flavourings, stabilisers, salt and sometimes probiotic cultures, are also added.

As you can see, we’ve featured one vegan option that uses mainly cashew nuts, one that uses a mix of oats and oils and one that relies heavily on coconut oil. We’ve compared them to the market-leading Philadelphia spread and added Philadelphia Light too.

From a health perspective, the New Roots Free The Cow Spread is the best option with lower saturated fat and higher protein levels than the others. The Koko option is the worst based on the figures with saturated fat levels that are higher than the dairy versions and protein that is lower. It is worth saying that coconut oil is viewed by some research as having some health benefits, such as the possible reduction of bad cholesterol (or at least not raising it) and a possible increase in good cholesterol, but further research is needed to draw more concrete conclusions.

All in all, no cream cheese – whether vegan or dairy – could be described as particularly healthy, but it seems the vegan options made from cashews are the least bad for you. Of course, if you eat it in moderation anyway it’s not going to be much of a problem.

As with other products that are conventionally made from dairy milk, we are pleased to see that there is both a decent number of vegan alternatives but also that the quality is high. When it comes to something like vegan ice cream, the best products are almost indistinguishable from their dairy counterparts. We wouldn’t go quite that far with vegan cream cheese, but we would certainly say many of those products mentioned above are very tasty in their own right and certainly serve as very good replacements for dairy cream cheese.

We were surprised to see some of the vegan-friendly cream cheese products having similar (or even higher amounts) of saturated fat as those made from dairy milk. But those that are high in saturated fat use coconut oil as one of their main ingredients and the health implications of this plant-based oil are difficult to unpick within the scope of this article.

All in all, for those on a plant-based diet, there are several good cream cheese options. The more health-conscious among you might want to edge towards those made from cashew nuts for lower levels of saturated fat and higher amounts of protein.