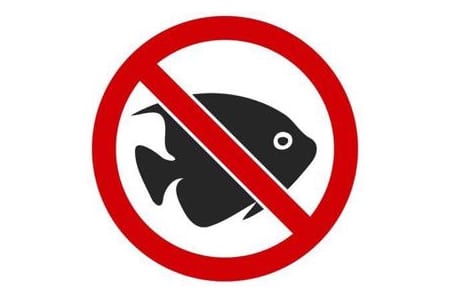 Despite the fact that the number of vegans, both in the UK and around the world, is increasing and that veganism features regularly in stories in the media, to many people it remains a confusing world. That’s fine though, because we know a lot about veganism and not a lot about fixing cars, knitting or countless other topics. Nobody knows everything about everything and one question that many vegan newcomers ask is: do vegans eat fish?

Well, we can give a very simple answer to this one and that is: no, vegans don’t eat fish. The Vegan Society definition of veganism is below and essentially answers why this is the case:

A philosophy and way of living which seeks to exclude – as far as is possible and practicable – all forms of exploitation of, and cruelty to, animals for food, clothing or any other purpose; and by extension, promotes the development and use of animal-free alternatives for the benefit of animals, humans and the environment. In dietary terms it denotes the practice of dispensing with all products derived wholly or partly from animals.

Vegans Do Not Use Animals for Food

To our mind that couldn’t be much clearer: vegans do not use animals for food. There are more than 30,000 species of fish in the world but, as fish, they all sit within the taxonomical Animalia kingdom. In other words, if your science-at-school days are a very distant memory, all fish are animals. And, to use a bit of syllogistic reasoning:

So, no matter if you are a vegan for ethical reasons, because of the environment or for the health benefits of a plant-based diet, fish is definitely off the menu. Ah, if only all questions about veganism were answered so easily, life would be much easier!

Rather than end the article here though we will look at why some people might be confused about this seemingly straightforward notion, and we will also consider some of the issues surrounding it. Whilst the answer to the question, “do vegans eat fish?” is a very straightforward “no”, things are never quite as simple as they seem.

Veganism is becoming more and more mainstream but just as with any vaguely specialist area of knowledge it has lots of terminology and lingo with which the uninitiated may not be familiar. You can check out our Vegan A to Z if you ever see a phrase you don’t know and some may feel the need to refer to it for words like pescatarian.

We explain in more detail the difference between being vegan and vegetarian but contrary to what some vegetarians might feel, neither group can eat fish. Of course, it’s a free world and if you want to be a vegetarian who eats fish or even a vegan that does so, that’s fine by us. We are not the ‘Dietary Choices Police’, after all.

But language is based upon everyone (or most people!) agreeing on the meaning of a given word. If we ask for an apple and an apple to you is what we call a punch in the face, things could get rather nasty. A fish-eating vegan might not cause quite so much trouble but if that’s the way you choose to roll, don’t be surprised if other people, especially vegans, find it a little strange or objectionable.

In a modern world that loves labels and neologisms, there are now new and specific ways to describe just about every diet imaginable. Raw veganism or the vegan keto diet anyone? Given this, keeping track of who eats what isn’t easy and we think this is partly why people are unsure about whether vegans can eat fish and other seafood.

Clarification of the Different Diets

There are lots of different terms to describe various diets and, as alluded to, some of these are listed in our glossary. However, the four that are key to this question are veganism, seaganism, vegetarianism and pescetarianism. Hopefully the table below can clarify things for you.

The word “seagan” may have been coined by Amy Cramer and Lisa McComsey in their 2016 book Seagan Eating: The Lure of a Healthy, Sustainable Seafood + Vegan Diet. Irrespective of who created this rather dreadful portmanteau, the idea of adding fish and seafood to a vegan diet makes sense to some people.

For those who have adopted veganism for purely health reasons the argument is most compelling. Fish and other seafood are broadly believed to be very healthy, with the UK government advising that the population as a whole needs to eat more.

Oily fish in particular is thought to be healthy, providing omega oils that are difficult to obtain from other sources. Some fish and seafood are also good ways to get vitamin B12, iodine and other minerals that can be hard to obtain from a purely plant-based diet. In addition, all fish and seafood provide good sources of protein and despite the fact that there are enough great vegan sources of protein to service the muscles of vegan bodybuilders, let alone your average man or woman, some people still question whether a vegan diet does deliver enough protein.

If you have decided to eat a plant-based diet for health reasons and are, therefore, a dietary vegan, whether to eat fish or not is a choice you must make yourself. We are inclined to believe that it is possible that the healthiest diet imaginable may include some fish, although research on this is limited.

That said, research into the so-called Blue Zones that have exceptional life expectancy suggests that eating much less fish than the NHS/UK government recommends may boost longevity. The site states that, “In most blue zones, people ate some fish but less than you might think” and so it is far from clear that eating fish will offer much benefit.

If you are a vegan for either environmental or ethical reasons then any argument for seaganism is weak, in the case of the former, and non-existent in the case of the latter. Amy Cramer, one of the authors mentioned above, told the Huffinton Post:

We absolutely honor and admire them, the ethical vegans. We became vegans for health reasons, but this is absolutely not for ethical vegans. As far as the environmental issues go, basically that was one of the reservations for us to write this book. Like, OK, so you can eat fish, but which fish? Which fish aren’t becoming extinct, which are being safely caught and aren’t being overfished? Which fish have less mercury and other contaminants?

Whilst most seafood is certainly less harmful to the environment than mammalian farming, there are many issues to be concerned about. Overfishing, the emissions created by the boats, the problem of bycatch, and the huge resources needed (and animals killed) for farmed fish feed are just some reasons why a vegan with environmental motivations should be asking a lot of questions before adding fish or seafood to their diets.

Something In The Way For Ethical Vegans

On Nirvana’s song Something In The Way, Kurt Cobain sang “It’s okay to eat fish, cos’ they don’t have any feelings”, and whilst the exact meaning of that lyric is unknown, there is certainly something in the way for vegans when it comes to eating fish. They may or may not have what humans would call “feelings” but they are unequivocally animals and so are categorically off the menu, metaphorically and literally for vegans.

It is beyond doubt that fish are sentient beings; whilst they don’t have fingers (sorry, Captain Birdseye was lying!), they are definitely able to experience pain, as reported in the Smithsonian. Given they are animals and they can experience pain, it is very easy to see why any accepted definition of veganism precludes the eating of fish.

Just when we thought it was safe to go back in the water (for a swim, not a fish), up pop the ostrovegans. Another new word on the block, an ostrovegan is someone who is vegan but does eat oysters and sometimes other bivalve molluscs such as mussels, clams and scallops. The name comes from the Latin for oyster, ostriferi fauces and the issue is something we look at more specifically in our aptly named feature are oysters vegan?.

In short, it has been argued by some that vegans can eat such animals because it is questionable as to whether they can feel pain. As ever, everyone must draw their own personal line so check out our longer feature in order to help you make up your mind.

Conclusion: Vegans Do Not Eat Fish

So, to go full circle and return to the simple answer we gave to start with, vegans do not eat fish. Flexitarians (see the glossary!) may do, pescatarians certainly do, as do seagans; but vegans do not eat animals, so that means no fish.