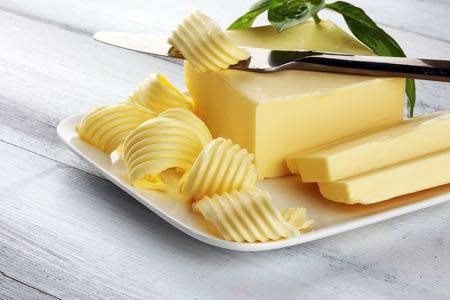 Butter can be used to spread on bread or other things, as an ingredient in sweet or savoury recipes, as a fat in which to fry food and even as a condiment (when melted). But butter, at least conventional butter, is made from milk or cream which comes from cows or other animals. Hence it should come as a surprise to very few people that butter is not vegan.

We figured you would know that already, so this article is focussed instead on the vegan alternatives to butter. We’ll also include vegan margarine options (as we discuss in our Is Margarine Vegan? article, some is vegan but plenty isn’t). Once we’ve run through the best vegan butter and margarine options available in the UK, we’ll also explain how you can make your own vegan butter, in case the fancy takes you.

What Is Vegan Butter Made From?

Whilst dairy butter is made predominantly from milk or cream from cows, vegan alternatives to butter replace the dairy ingredients with vegetable fats of various kinds. Just about any vegetable fat can be used to make vegan butter or margarine, but in mass-produced products you will tend to find a combination of two or more of the following:

You are also likely to see lecithin (from a plant source such as sunflower or soya) amongst the ingredients of vegan spreads. This is added as an emulsifier to help promote a good texture and consistency in the vegan butter/spread. There are often other additions including salt (unless it’s an unsalted butter alternative of course), water, vitamins of various kinds, colour (often carotene or turmeric), and other flavourings or preservatives.

Where to Buy Vegan Butter & Margarine

These days most big supermarkets will offer at least some vegan-friendly butter options and all (in our experience) offer vegan margarine, as a lot of that contains no animal-derived ingredients, anyway. For vegan butter options, it should be obvious which are vegan friendly as they will almost always be marketed and packaged as such – such as Flora Plant Butter. It will be less obvious with margarines on occasion as there are often some animal-derived ingredients that sneak in, with buttermilk (made from dairy milk) being one of the most common.

Let’s take a quick look at the some of the main supermarkets and list their top vegan-friendly butter and margarine offerings. This is just to give you an idea of the number of products there are available and they are bound to differ and change over time.

Note that at the time of writing, some supermarkets list Flora Buttery Spread as vegan… but this is not the case. While it used to be vegan, the makers of Flora have recently begun adding buttermilk, rendering it non-vegan… a decision that has gone down like a lead balloon in some quarters.

Also, note that some of these products marketed and sold as vegan contain palm oil, which some vegans choose not to consume. Some include only sustainable palm oil, but please check with the individual producers for details.

Until Flora spoiled things by adding buttermilk to their Buttery spread, we would have rated them as one of the best vegan butter-like spreads. But, thankfully, there are plenty of other options, as you will have seen above. Here we run through our Top 5 vegan butter alternatives and our Top 5 vegan margarines.

Here are the vegan-friendly options that most resemble real dairy butter. These are sold in blocks like standard butter is and can be used for spreading on your bread or toast, or as an ingredient in your favourite vegan cake recipe.

The fat content varies a little between the various options mentioned above, but to give you a rough idea for comparison purposes we’ve listed the nutritional information for a dairy block of butter and the Naturli’ Butter Block.

There is not a massive difference between the fat content of dairy butter and non-dairy butter, but the plant-based options tend to be lower, especially in terms of the saturated fat content. With fewer calories, less fat, less saturated fat and a third less salt, there is no doubt that the vegan alternative is considerably healthier overall.

Clearly, this will come down to personal taste, but here are the five vegan-friendly margarines that we are more than happy to spread on our toast and home-baked bread.

Again, we have selected an example of a non-vegan margarine (that contains buttermilk) and a vegan-friendly option in order to give a snapshot comparison between the nutritional values of each.

There is generally very little difference between vegan and non-vegan margarines in terms of the nutritional values, though the latter tend to be slightly high in fat and (especially) saturated fat as they often include buttermilk amongst their ingredients. The difference does not tend to be as marked as that found between dairy and non-dairy butter however.

How to Make Vegan Butter

Like with many vegan foods, with vegan butter – or vegan-friendly butter alternative, if you prefer – there is always the option to make your own. If you have the inclination, it really isn’t too difficult.

It is likely that a non-vegan butter aficionados would be able to taste the difference between a good dairy butter and a vegan alternative. Having said that, vegan butter can be made to incorporate some appealing flavours if you make it yourself. This can be achieved through experimentation with different levels of salt, various herbs, the additional of nut-based flour or the use of a more prominently flavoured oil (such as sesame oil or hazelnut oil).

Of the mass-produced vegan butters, the likes of Mouse’s Favourite Vegan Gold Butter and Naturli’ Vegan Block are decent enough replications of real dairy butter when it comes to taste and consistency. For baking and recipes, many of the options above will suffice, and when it comes to a spread for your toast it’s a matter of trying a couple of options and finding out which you like the most.

Vegans who miss the taste of real dairy butter need not be too distraught as there are a few options that offer reasonably good imitations of the real thing, especially once your taste buds have had time to adapt if you are new to the world of plant-based eating. As you will see from the many vegan-friendly options we list above, vegans are somewhat spoiled for choice when it comes to vegan-friendly margarines or butter-like options for baking.

What’s more, it really isn’t too difficult to make your own vegan friendly butter. If you opt to do this, as well as immense satisfaction, it means you can easily experiment with flavour combinations and different oils to produce something that hits all the right flavour notes for you.