Vegetarian alternatives to beef mince have been around a long time and, more recently, many vegan mince options have been developed. In this article, we’ll give you the lowdown on the many vegan-friendly mince products that are available in the UK, what they’re made of and how they stack up against beef mince when it comes to health and nutrition and, crucially, taste.

This might well go without say, but please note that we are talking about the kind of mince that is used in spaghetti Bolognese or cottage pie (among many other things), not the type that goes in mince pies (for details on that kind of mincemeat, check out our vegan mince pies article).

In addition, also note that our focus here is on alternatives to beef mince. These could also be used instead of lamb in some recipes but would be less suitable where pork or chicken mince were needed. At the moment, vegan alternatives to these types of meat products are less common but hopefully this will improve. To kick things off, let’s give our view on the top five vegan mince products currently available in the UK.

What Is Vegan Mince Made From?

As with many vegan-friendly meat alternatives, with vegan mince there tends to be some kind of base protein that makes up a large chunk of the product. Naturally, this makes all of these vegan minces excellent sources of vegan protein. In most cases, this protein-rich ingredient tends to be soya, often which has been rehydrated or textured in an attempt to replicate the mouthfeel and consistency of real meat mince. Other ingredients have been used too, though some are more successful than others.

There are various other ingredients that appear in vegan mince products, as you will notice below, including (often natural) ingredients used to enhanced flavour, colour, texture or shelf life.

The good news is that some of the vegan mince options we feature replicate the texture and – to an extent – the taste of real mince very well. And they certainly replicate mince better than most vegan bacon products do real bacon!

Even mince made from real meat tends to soak up the flavour of the ingredients added to it, for instance the chillies and spices in a chilli-con-carne, or the tomatoes and herbs from an Italian ragu. And, the same is true for vegan mince. On its own, most varieties tend to be fairly bland in flavour terms, but usually readily soak up the flavours of the other ingredients in the same way as meat mince.

Therefore, whether a particular vegan mince “tastes” like meat mince (and we are generally referring to beef mince when we say that) really comes down to whether its texture and mouthfeel is a good representation of those of meat mince. This can differ significantly between the many varieties of vegan mince, with some being too soft or flimsy, while others can be too chewy and lacking in give. There are a good number that – to us – have got the balance about right though, and they’re the ones we mention in our Top 5 above.

Of course, whilst saying that flavour is less important when it comes to mince because of the way it is usually used, that is not to say it is irrelevant. No vegan mince substitute fully matches the savoury, meaty, umami of well-browned beef mince. Equally, they are invariably not as rich as mince from animals, although this is explained by their lack of fat, especially saturated fat. Vegan mince may not offer the same fatty deliciousness as beef but, it is, as a consequence, invariably far healthier.

Some people might be put off some vegan mince products because of the number of ingredients they contain. Whilst most vegan meat products are fairly healthy – and certainly more healthy than almost all meat mince products – some people want to keep things as natural as possible. If you are seeking to avoid such ingredients as methyl cellulose or even maltodextrin, here are a couple of options for you:

Basically the textured soy protein mentioned above (that is, soy flour that has had the oil removed), there are a few products on the market that contain either defatted soy alone or defatted soy and some water.

Veganz Soya Mince and Clear Spring Organic Soya Mince are two options that will certainly appeal to those seeking hefty doses of vegan protein as they each contain more than 40g of protein per 100g. These do lack flavour though, so are best used in dishes that include plenty of herbs or spices.

Not as good in terms of protein content or indeed textured (if you are seeking something resembling real meat mince), but many vegans simply add lentils in place of minced meat in recipes, such as cottage pie, chilli con carne, spaghetti Bolognese and others.

This is certainly a great value alternative as they can cost less than £2.00 per kilogram. Adzuki beans and other similar legumes can also be used in this way for those looking to eat as “clean” as possible.

Here we delve into the nutritional information, ingredients and price of our top picks for vegan mince in the UK. Note that prices are approximate and subject to change, and the ingredients are correct at the time of writing and might also change. 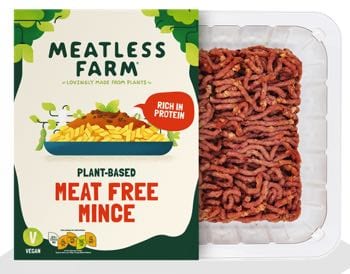 The fact that this vegan mince contains more than 10g of fat per 100g will concern some people as this is significantly higher than some other options. But others will forget about that on the basis that this plant-based mince from the Meatless Farm Co is about as close as we’ve got to the real thing.

That extra fat content really helps give it a juicier texture and boosts the flavour. Throw in the fact that it is fortified with B vitamins, zinc and iron, and this is one attractive product. 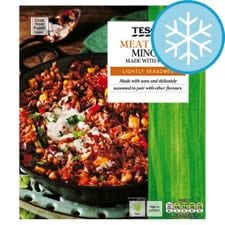 This is one of the lowest fat options around with less than a gram of fat per 100g and just 0.3g of saturated fat per 100g. It doesn’t have quite as much protein as some other vegan mince products, but it’s certainly a very good choice for anyone watching the calories and it’s second to none in terms of value for money at less than £4.00 per kilogram. 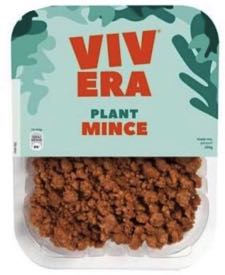 Even lower in fat than the Tesco own-brand option, and with a bigger helping of protein and fibre, Vivera Veggie Mince ticks all the boxes when it comes to health (although it is a little high on salt).

It perhaps could be considered a little on the bland side in terms of flavour compared to some, but it works very well in dishes to which plenty of spices and more robust flavours are added. Some will find it expensive and there is no denying that it does cost more than most alternatives, be they vegan or meat.

Available From – Tesco, Waitrose, Sainsbury’s, Co-op, TheVeganKind Supermarket and others 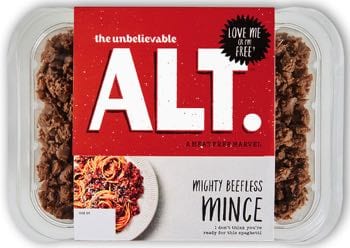 One of the best options out there in terms of texture, this mincemeat alternative is owned by the same organisation that owns Linda McCartney Foods. They are starting to gain in popularity for this and their other vegan products and we expect them to branch out to more retailers in the future. They pack in excellent amounts of protein and a decent level of fibre and there’s less than a gram of saturated fat per 100g of mince. 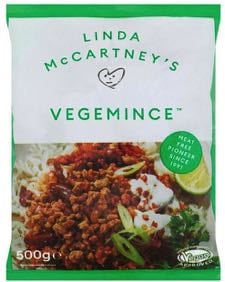 A relatively late addition to the vegan mince party, which is something of a surprise given the wide range of vegan products made by Linda McCartney (especially their excellent vegan sausages). Better late than never though, and this Vegemince ticks all the right boxes: low in fat, high in protein, and boasting a decidedly meaty texture.

Available From – Tesco, Waitrose, Sainsbury’s and others 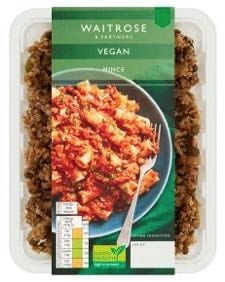 Here we run through the main vegan mince options available in the big supermarkets like Tesco, Morrisons, Asda and Sainsbury’s, as well as more specialist stores, such as TheVeganKind Supermarket, GreenBay Supermarket and Planet Organic.

We’ve included the ingredients so you can quickly see what’s in each vegan mince, for instance, in case you wanted to check whether it contained palm oil (which is an issue for many vegans but is not commonly added to vegan mince), or perhaps you might have concerns about certain allergies.

Note: the ingredients listed are correct at the time of writing and are may be subject to change. Please check the ingredients when purchasing, particularly if you have any serious allergies.

We didn’t include Birds Eye Green Cuisine Meat Free Bolognese Mix or their Meat Free Chilli Mix as they go beyond the standard vegan mince products by including various other ingredients and flavours. Note that at the time of writing, Quorn do not produce a vegan-friendly mince product. Check out our feature on Quorn for more about that, with the Quorn Mince product one of many in their range that contains rehydrated egg white.

Based on some typical examples of beef mince and lean beef mince we can get an overall idea of the nutritional content of meat-based mince below.

Looking at the nutritional data for typical examples of beef steak mince and lean beef mince compared to some of our plant-based options above, the following is apparent:

When it comes to comparing the environmental impact of beef mince to that of vegan mince, there really is no contest. We’ve covered a lot of the relevant information in our article on the environmental reasons for veganism. But – based on the BBC’s Climate Change Food Calculator – consuming 75g of beef once or twice a week would contribute 604kg to your annual greenhouse gas emissions; if you consumed tofu (soy) instead, it would contribute just 12kg to your annual greenhouse gas emissions.

Of course, this is a rather simplistic tool and there are various contributing factors that could affect things. But there is little doubt that consuming beef mince is far, far worse for the environment than consuming any of the vegan mince options would be. In terms of producing calories and even protein, plants are a far more efficient use of land and water than animals and also generate far less carbon too.

There are a growing number of high-quality vegan mince options that are healthier for consumers and better for the environment than their meat counterparts. Not only that, many of them are very good replicas of meat in terms of texture and – in some cases – flavour.

When used in recipes, especially those that contain herbs and/or spices, vegan mince stands up very well to meat mince. Most of the minces we have looked at would not be suitable for making your own meatballs or burgers with. However, given there are so many great vegan versions of both those and other mince-based items, that is not really an issue.