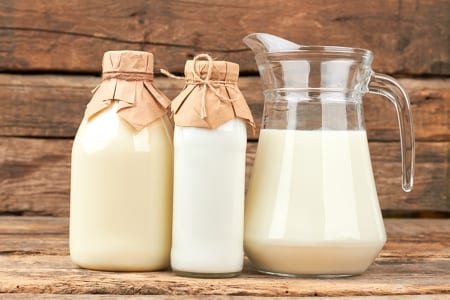 The issues around whether a certain food or drink is vegan can be exceptionally complex but, thankfully, when it comes to milk the answer is quite simple. Is milk vegan? No. Not if it is milk from an animal, and the clue is in the description: milk from an animal.

Milk is designed by God, Nature or evolution, depending on your viewpoint, for the animal species whence it came. It is their milk and when humans take it from another species they go against the vegan creed. Veganism seeks to avoid causing suffering and pain to animals but it also seeks to avoid their exploitation and when it comes to animal-based milks, there appears to be little doubt that their production is not possible without going against this stated ethos. 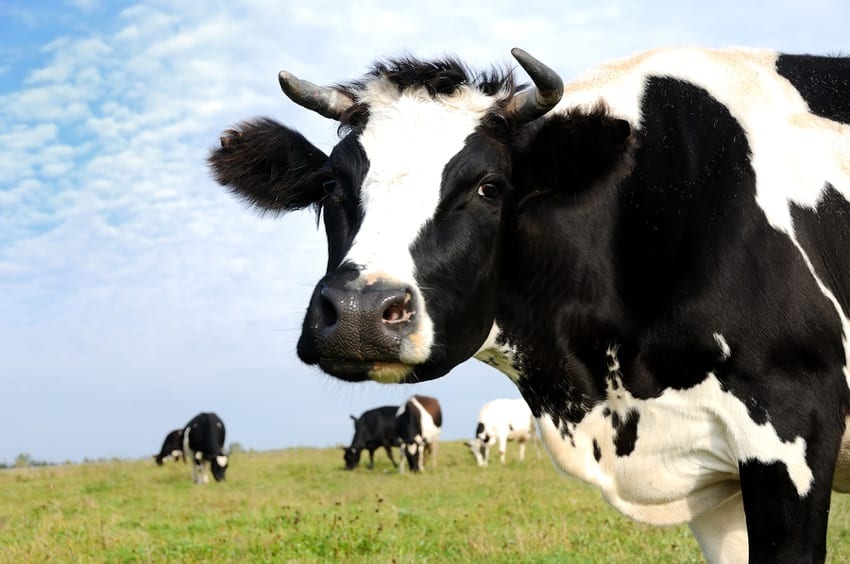 As with many of our is it vegan? articles, we will start by looking at what milk is. That, like the question “is milk vegan?” may sound incredibly simplistic but it is instructive to understand exactly what we are talking about.

Humans consume and use the milk of myriad animals and, whilst the milk of cows is by far the most common in terms of consumption, increasingly milk from a growing variety of other animals is becoming commercially available. Around 85% of human milk consumption (excluding mother-to-baby milk) comes from cows.

However, in a world in which allergies and intolerances are rising and the hunt is always on for the next “superfood”, that percentage is dropping. Below is a list of animals that provide alternative to cow’s milk, although some of these are far more common than others, with most only consumed in specific regions of the world.

No matter what animal it comes from, milk, as described by Wikipedia, “is a nutrient-rich, white liquid food produced by the mammary glands of mammals”. The fount of much modern knowledge goes on to state that, “It is the primary source of nutrition for infant mammals … before they are able to digest other types of food”.

Only female mammals can produce milk and milk can only be taken from an animal either whilst they are pregnant or for a (relatively) short period of time afterwards. This is because God/Nature/evolution (delete as you wish!) designed mammals to feed their young with this milk. There are many reasons why vegans do not drink milk or consume milk-based products, such as cheese, and we have touched upon some of these already, but we will now expand on this.

Why Milk is Not Vegan

There are many interrelated reasons why vegans do not consume milk and some of these flow from one another. Quite how we answer this question depends how much detail and complexity you are looking for.

On one level, the answer is very simple: vegans don’t use milk because it comes from animals and can be easily avoided. On another level, it not only exploits cows, taking from them – to their detriment and our benefit – something that is meant to be consumed by their young, but also causes them suffering and inflicts cruelty upon them. Essentially, all further explanations simply describe how that cruelty and exploitation takes place.

The Truth About Dairy Farming 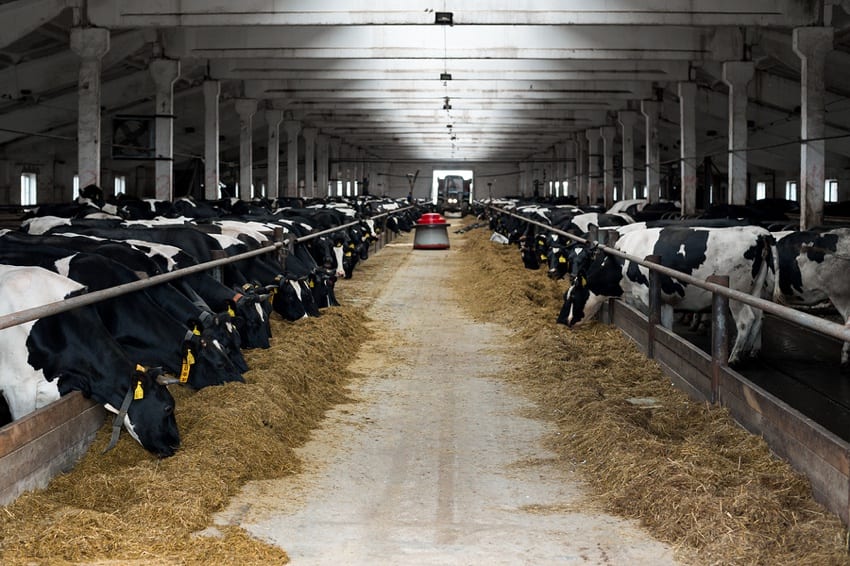 There are various documentaries and videos about the dairy industry and films, such as the BBC’s The Dark Side of Dairy, Leonardo DiCaprio’s Cowspiracy, and the 5-minute YouTube, Dairy is Scary, shine the light on different negative aspects of it. If you’re an animal lover we wouldn’t necessarily recommend watching some of those films, but many people would benefit from understanding more about the impact consuming milk has.

Those that oppose dairy farming claim it is essentially systematic cruelty and that milk cows suffer far more than many animals involved in meat production. One of the key things to note about the dairy industry is that, in many ways, it is the meat industry.

Cows Are Treated As Machines

For many observers, it is the opinion that cows within the dairy industry are reduced to no more than parts within a machine. They are treated accordingly, not as animals, and as soon as they break – which is to say stop providing milk – they are discarded; which is to say slaughtered.

Most animals from within the industry ultimately end up as food. “Retired” dairy cows are typically used in cheap processed meat products for human consumption, or even in pet food. At the other end of the spectrum, male calves are also eaten, sometimes put in the same products or increasingly used for veal.

Whatever happens, cows from within the dairy industry end up dead and are almost always used as food. There is no happy retirement eating lush green grass in the meadow under clear blue skies.

Whilst a beef cow, raised for meat, lives a relatively short life before being slaughtered, a dairy cow endures a long (relative to meat cattle) life of repetitive suffering. In order to produce milk, cows are kept in a state of more or less permanent pregnancy.

They are artificially inseminated so they fall pregnant and begin to lactate. When they give birth, their calves are either killed (male) or primed for a life as a dairy cow themselves (female). Either way, the young are almost instantly removed from their mothers, causing huge distress to the cow, with these animals proven to have a strong maternal bond. Calves reared away from their mothers also suffer long term negative effects.

Although their offspring have been taken away, the cow will continue to lactate and will be (usually) mechanically milked once or twice a day. This continues until the yield decreases and it is deemed necessary to impregnate her again, and the cycle continues.

A Cow’s Lifespan is Shortened Dramatically

Whilst a cow can live for 20 or even 25 years, most dairy cows are killed after just five to seven years of life. By this stage, the gruelling treadmill of life as a milk machine has rendered them lame, so they can no longer stand or have trouble walking, as is the case for between a quarter and a third of cows on an average UK dairy farm according to the RSPCA. Once their milk yield has decreased, usually after four cycles, they are slaughtered. Like a worn part, they are simply disposed of and replaced.

Throughout this entire process, the cow is often forced to suffer a huge range of cruelties and indignities. They are forcibly inseminated, often kept in confined spaces on unsuitable concrete surfaces, repeatedly separated from their young, bred to yield unnatural levels of milk that their bodies cannot deal with and some will never even see the light of day.

When faced with the truths of the dairy industry, it is impossible to see milk as anything other than non-vegan. Indeed, given the suffering involved and the fact that ultimately most dairy cows become meat cows, it may well be argued that cow’s milk isn’t really even vegetarian.

Can Milk Be Ethically Sourced? 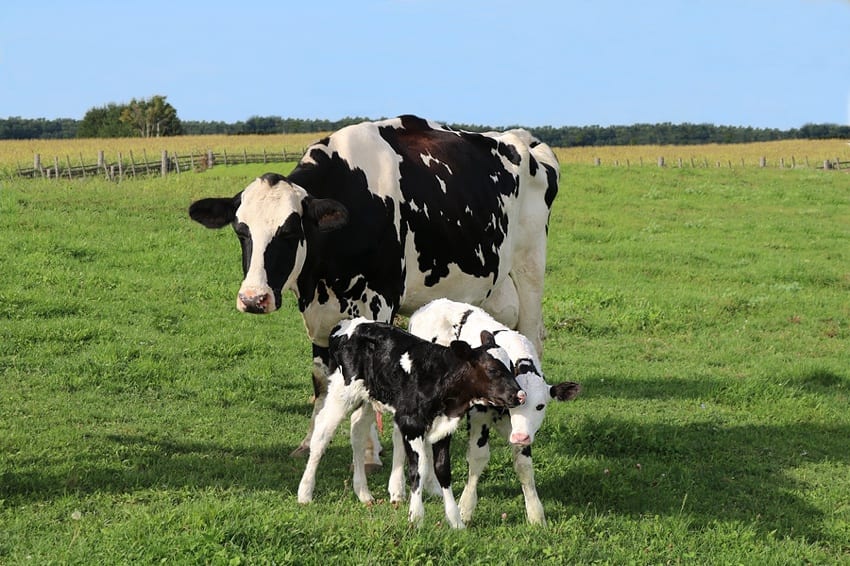 For vegans who don’t see things purely in black or white, there may be some merit in seeing some forms of animal exploitation as less bad than others. Whilst they personally wouldn’t drink it, milk from a small herd of organically, responsibly managed cows who are well treated and have space to roam can be viewed as less cruel and potentially more ethical.

This concept may well be of no interest for a vegan because no matter how well the cows are treated, they are still being exploited by humans. However, for someone looking to move towards a plant-based lifestyle and consume milk in a way that is less damaging and more sustainable, the question of ethical milk may well seem like a reasonable one.

In theory, milk could be obtained from animals (cows or other mammals) in a way that was much less cruel than is now the case. However, unless you yourself maintain a small herd or know someone that does, understanding exactly how the animals are being treated would be difficult. Moreover, such a system could never provide for the number of people who want to consume milk.

Such “ethical” milk would also need to provide a free and caring post-dairy life for its herd, further complicating the whole process and making it less viable. And of course, last but certainly not least, the issue of exploitation and of taking milk that the cow has produced for its young cannot be avoided.

How Milk Is Used

Having accepted that there is no real way to consume milk ethically, the fact remains that many find it difficult to give up. One of the reasons some vegetarians and other people who are considering a switch to a plant-based diet find it hard to forsake milk is because of its tremendous culinary flexibility.

Milk may have once been a primary school morning staple, drunk “as-is” by children all over the UK, but most people consume milk in a range of very different ways. Moreover, by processing it in different ways a number of even more versatile products can be created.

Actually drinking it as a standalone beverage is relatively unusual these days, but milk finds its ways into so many different products and foods (and our list above doesn’t even include milk-based food additives, such as casein, lactose or whey protein) that things can seem tough for vegans.

However, luckily for would-be vegans or those dismayed by the dairy industry, there are a whole host of non-dairy milks that can stand in admirably for “cow juice”.

There are loads and loads of different vegan milk substitutes and some work better for some things than they do for others. We’ll look at that in more detail in our main feature on vegan milk alternatives but here are just a few of the most popular, readily available options:

There is absolutely no debate over whether dairy milk is vegan: it isn’t. Right now the many available vegan milk substitutes can do a decent job of standing in for dairy milk. That said, there is no denying that vegan cheese and a couple of foods that are usually reliant on milk have some way to go before they will be winning over the masses.

Giving up milk and all the related products isn’t easy for most vegans. But who ever said that life was easy? Armed with the right information and plenty of vegan dairy alternatives, it is easier than ever to avoid milk altogether and continue to eat delicious food.