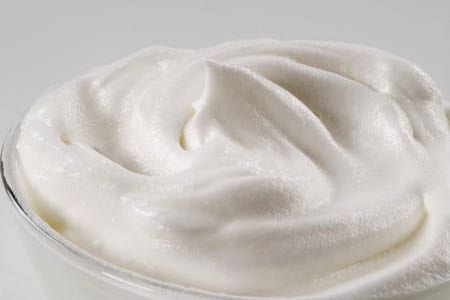 Whether you are a fan of whipped cream squirted onto hot chocolate or a drizzle of single cream over a slice of apple pie, dairy cream is off the menu for vegans. Given that conventional cream is made from milk (usually from cows) it should come as no surprise that it is not vegan. But all is not lost for those following a plant-based diet. As we shall show in this article, there are loads of great vegan-friendly alternatives to dairy cream.

More good news is that, just as with the best vegan ice cream, vegan cream tastes just as nice as dairy cream… and it tends to be a fair bit healthier too!

Before we list our favourite vegan cream options, let’s briefly run through the main types of cream and what they tend to be used for.

What Is Vegan Cream Made From?

A Note About Palm Oil

When browsing the aisles for vegan-friendly cream – and indeed many other plant-based products – you will no doubt encounter palm oil (or palm fat or similar) amongst the ingredients. As we discuss in detail in our palm oil article, there are some real environmental issues around the consumption of palm oil, particularly around habitat destruction. Many vegans therefore simply avoid all products that contain palm oil; others will only choose products that include “responsibly sourced” (or similar) palm oil; others still will simply decide that because palm oil comes a plant, it is fair game for vegans.

Where you sit along this spectrum of views on palm oil is obviously your call. Note that there are plenty of other seemingly vegan products that have similar (or other) environmental concerns too. This could be in relation to the exploitation of bees to pollinate crops of almonds or avocados or the fact that much of the soy consumed worldwide is grown on land that used to be rainforests. In short, it pays to read up on these and other issues so you can make an informed judgement.

Here we’ll run through some of the best vegan-friendly cream options that are available in the UK at the time of writing. We’ll split these into cream type (based on the types listed above) to make things nice and easy.

To give you an idea of how the plant-based creams compare to the dairy options in terms of nutrition, we’ve given an example at the end of each section. Check out the individual product website/supermarket website for full nutritional details of any creams we have not featured. 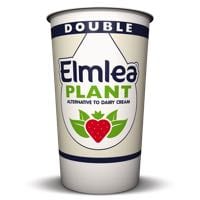 Here are some of the best double cream options available for vegans in the UK. There are not many, alas, when compared to the array of vegan single cream options. But we are hopeful more will appear in the not too distant future. There are no really good vegan alternatives to “extra thick double cream” and for such purposes it might be better to use one of the whipping cream options detailed later in the article.

When compared to the Tesco own-brand double cream, Elmlea’s option is significantly lower in calories and fat (and saturated fat). It contains similar amounts of sugar and a little less protein than the dairy version, though cream is not a brilliant source of protein in general and there are many better vegan sources of protein out there if you are looking to increase your intake of this macronutrient.

Although the extra fat of the real thing does lend “normal” double cream a creaminess that is hard to match, as said there are lot more calories contained within the dairy version – about 60% more. 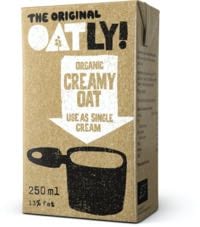 People seeking vegan-friendly single cream have a far greater choice available to them. It’s worth trying two or three to find out which floats your boat in terms of the flavour and consistency. For us, Oatly’s offering is tough to beat, though Sojade’s product is also very good.

As with double cream, there is a marked difference in the fat content between the dairy cream and the plant-based alternative. In this case Oatly’s Creamy Oat single cream offering contains just 1.5g of saturated fat per 100ml compared to 12.2g of saturated fat in 100ml of the Tesco own-brand single cream product. 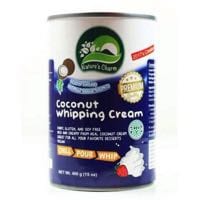 Not to be confused with whipped cream (which is coming up in the next section), whipping cream is the pre-whipped version that requires you (or some kind of kitchen contraption) to apply a bit of effort to whip it into shape. It’s almost a health food if you whip vigorously enough (maybe whilst also doing squats)!

There is less than half the amount of fat contained in our example plant-based whipping cream compared to our chosen dairy version. There is a significantly larger quantity of sugar in the vegan option, however, sugar often being added to recreate the mouthfeel that is lost from the lower fat levels.

This can be reduced by opting for unsweetened versions. Irrespective of the sugar content of the plant-based option, the dairy cream still contains a good deal more calories. 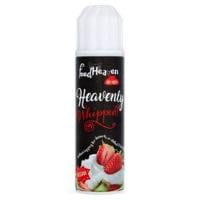 Pretty similar to whipping cream above, but this comes in a can and gets whipped into its fluffy gloriousness as it is ejected from said can and gets blasted with nitrous oxide (this gas being used as it was intended in this instance!). A great way to add a little laughter and happiness to your dessert or hot chocolate.

Once again, the calorie content of the dairy version far outstrips that of the vegan alternative. The dairy version also has double the about of fat. The vegan cream contains more sugar again here and the protein prize is scooped by the dairy product.

We were in two minds as to whether to include buttercream as it’s really just butter and sugar combined rather than conventional cream. We figured some people might well be seeking information about it though, so in the name of public service we found a place for it in the article. Aren’t we good?!

Given that buttercream is essentially just butter/margarine/oil and sugar, the nutritional values of the end product will be dependent on the oil/fat used. There are usually lower rates of saturated fats in plant-based butter/margarine or oils than there are in those derived from animals, but buttercream – being a combination of fat and sugar – is never going to be particularly healthy. 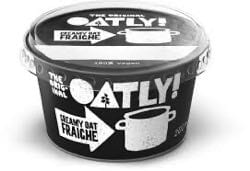 Oatly have clearly spotted a gap in the market here as there are no other really good options for vegan crème fraîche available at the time of writing.

Another cream, another vegan alternative that is significantly lower in fat and calories. Again the sugar content on the plant-based version is a little higher. But chances are you’ll be plonking this on a dessert of some kind so perhaps that isn’t a massive concern. 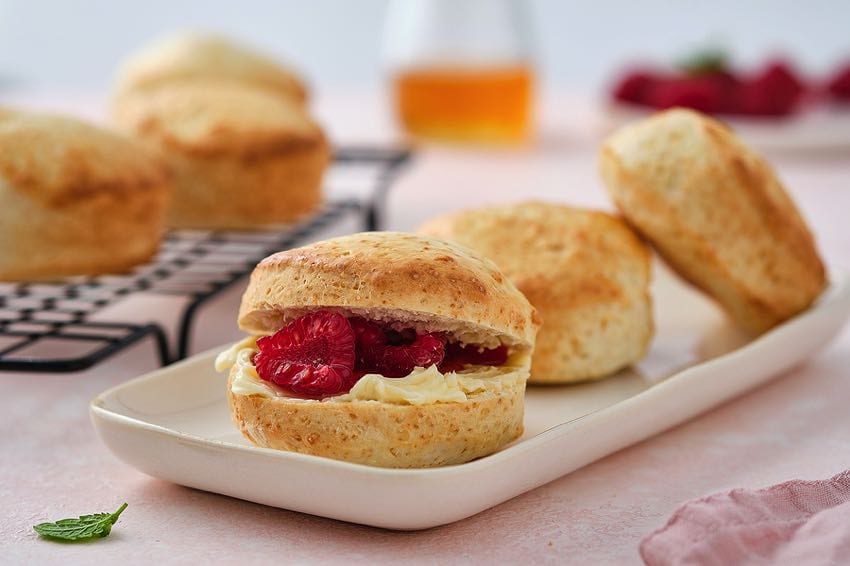 Unlike some other types of cream, at the time of writing, there are no vegan options when it comes to readymade clotted cream available to buy in supermarkets. As such, if you want your own vegan version of cream tea and scones, you are probably going to have to make your own “clotted cream”. This is not as tricky as it sounds and it fairly similar to vegan buttercream. Check out the details below.

How to Make Vegan Cream 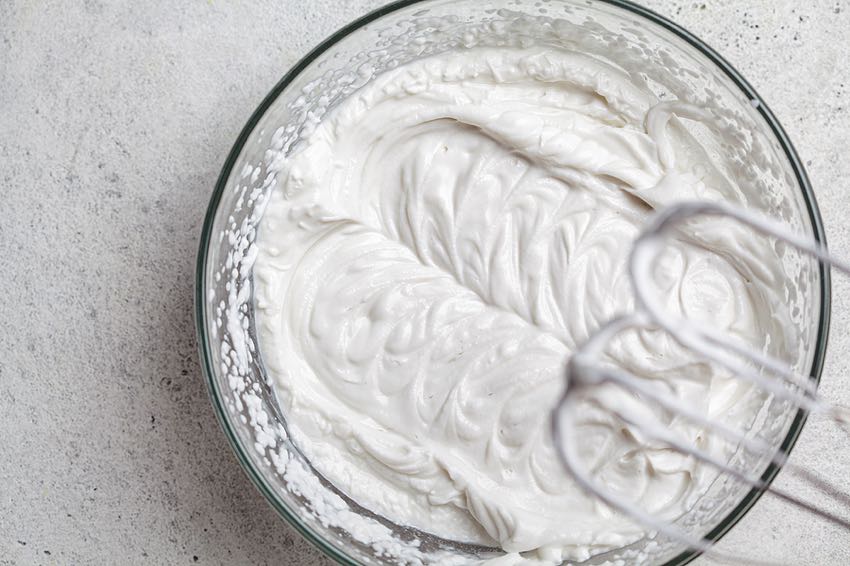 If you fancy trying to make your own vegan cream, there are a couple of options which are really very easy.

How to Make Vegan Buttercream

Firstly, choose your favourite vegan butter or margarine, such as Flora Plant Butter. Whatever amount of butter/margarine you use, you’ll need twice that weight of icing sugar. Beat the butter and half the icing sugar together in a bowl, then gradually add the rest of the icing sugar until it’s all combined into a smooth paste. You might like to add a splash of oat milk, and perhaps some vanilla essence or other flavouring as you see fit. And there you have it: simple vegan-friendly buttercream ready to use as icing for you vegan cake.

How to Make Vegan Whipping Cream

If you want a very simple way of creating your own vegan-friendly whipping cream, here it is. Simply chill a can of good quality, full-fat coconut milk or coconut cream in the fridge overnight, then open it and scoop out the white solids, leaving any clear liquid behind (to use for something else, perhaps in a smoothie). Then whip up the coconut cream and you should see peaks beginning to form after a few minutes.

How to Make Vegan Clotted Cream

Based on a recipe from the National Trust, you can make vegan clotted cream with the same ingredient as you might use to make buttercream, i.e. vegan butter/margarine, icing sugar, vanilla essence and oat milk. The key difference is that you use a lot less icing sugar for “clotted cream”.

Based on the recipe mentioned above, you use 175g of vegan margarine, ½ a teaspoon of vanilla essence and just 60g of icing sugar and a tablespoon of oat milk. You just beat the marge with the vanilla essence in a bowl until fluffy, then gradually add the icing sugar and a splash of oat milk (if required). And there you have your vegan clotted cream. It might not taste exactly like the real thing, but it at least looks the part!

When it comes to some vegan alternatives, it is hard to get a really accurate replica of the original in terms of the taste. One example of this would be vegan bacon, which is notoriously tricky to replicate (though there are some very good vegan-friendly bacons out there that do certainly make a decent effort!). However, we are happy to report that when it comes to vegan cream, our non-vegan guinea pigs have informed us that there really is very little difference in taste and texture compared to the dairy options… at least with most cream types.

This is certainly the case with single and double cream and whipped (spray) cream. Though it is a little less so with the likes of vegan crème fraîche or indeed whipping cream made from coconut milk/cream (as it will obviously retain the flavour of coconut, but this might well appeal for certain desserts).

There is little doubt that vegan creams are generally significantly lower in fat (including saturated fat) and calories than their dairy counterparts. They are sometimes a little higher in sugar and usually dairy creams contain a bit more protein. On balance though, we’re happy to say that vegan creams are far healthier than dairy creams as the difference is saturated fat levels is considerable.

The other big plus is that most vegan creams we have encountered taste a lot like dairy cream and on the whole fulfil the same culinary functions. In a blind taste test, someone accustomed to eating dairy cream would usually be able to tell the difference. However, for long-time vegans there are many excellent products out there that deliver the goods, and others that with a little getting used to will certainly please even non-vegans.

All in all, vegan cream is a great option for vegans, but also for non-vegans who are concerned about the health or environmental consequences of consuming dairy products. After all, dairy is scary (Disclaimer… not for the faint of heart!).