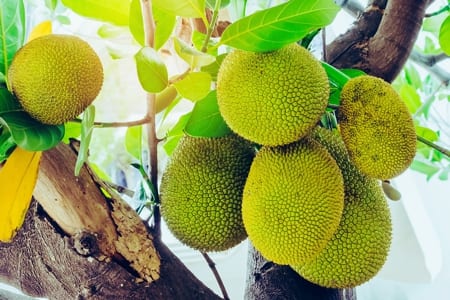 Jackfruit is one of those foods that few people had heard of until relatively recently but it has seemingly gone from obscurity to hipster-vegan cliché before you can say “avocado is over”. However, whilst it might be a regular feature in the kitchen for some, we rather suspect there are lots of you out there still pondering the question: what is jackfruit?

Well, whether you have heard the word jackfruit for the first time just prior to searching “what is jackfruit?” and reaching this page, or you are a jackfruit pro wanting to learn a bit more about it, or indeed you are somewhere in the middle, we’ve got everything you need to know about jackfruit right here.

Jackfruit is both the name of the fruit of the jack tree and also another name for the tree itself. Or, if you’re feeling like going a little Latin, horticultural or even both, you can opt for Artocarpus heterophyllus. It is thought to have originated in south Asia and is now found in a range of lowland areas in the tropics, although it can grow at a reasonable altitude too. It is widely cultivated in many countries, including India, Bangladesh, Sri Lanka, Thailand, Indonesia, Nepal and Malaysia.

The tree is a large species that can grow to as high as 25 metres and because the fruit is so big (about the size of an average four year old child!), that as well as growing on branches they also grow directly on the trunk. As well as being grown for their fruit, the tree is also cultivated for the excellent wood it yields. It is used to make furniture, musical instruments and barrels, as well as being used in house construction for frames, windows and roofs.

Much of the fruit and wood is used locally but increasingly the former is being eaten all over the world.

Is the Jackfruit a Vegan Superfood? 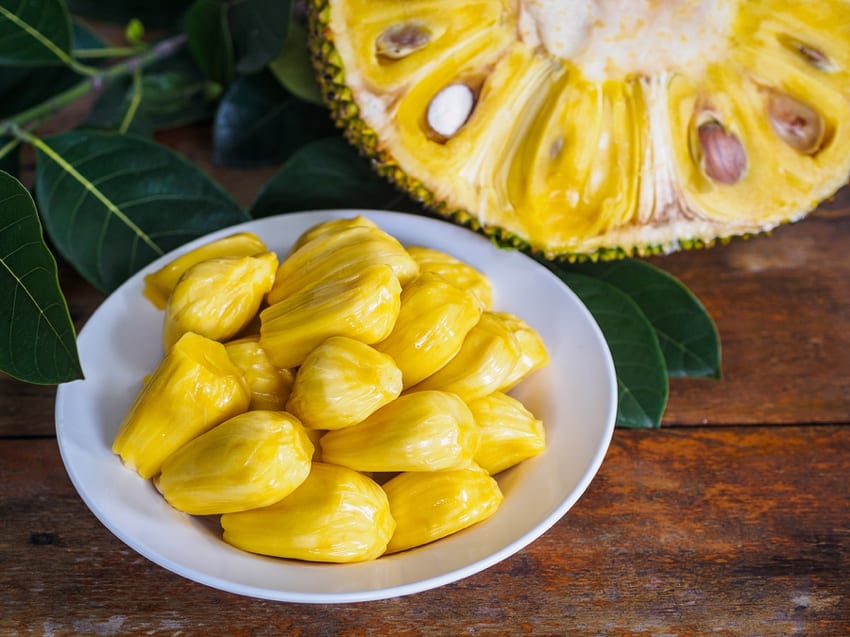 The reason we’re writing this article and at least partly the reason that jackfruit has grown in popularity so much is because it can be put to great use in the vegan kitchen. One tree produces so much fruit over its lifetime that jackfruit has been touted as a potential solution to world hunger. Moreover, in a world facing ever more serious climatic changes, some argue that jackfruit could replace other global staples, such as corn and wheat.

But it isn’t the potential to feed the world that has brought jackfruit to the attention of many in the western world. It is the fact that this nutritious and abundant fruit can be used in a number of ways, to create excellent vegan dishes, most notably when employed as a meat substitute.

Of course, this potentially links in to the environmental reasons for going vegan, as well and the ability to feed the expanding population of the planet. That is because if fewer people ate meat there would be a huge reduction in greenhouse gasses. In addition, animal farming is very inefficient in terms of the land, energy and water needed to create food. It has caused mass deforestation around the world and, to cut to the chase, if more people ate pulled jackfruit (of which more later) than pulled pork, we could feed more people and cut down fewer trees.

So, if jackfruit has at least got the potential to be an environmental game-changer, how does it fare nutritionally? Packing in the nutritional goodness is key for any so-called superfood, so how does our friend jack compare?

There are different parts of the jackfruit that can be eaten and it can be prepared in different ways. We’ll look at that in more detail later though. For now, we’ll focus on the main part of the flesh that protects the seeds. In terms of nutrition, the jackfruit flesh stacks up pretty well and here is what you can expect to find in a 100g serving:

Nutrient info is based on the USDA National Nutrient Data Base

As well as the nutrients listed above, jackfruit also has worthwhile amounts of many other nutrients. As well as vitamin B6 (pyridoxine), of which it serves up almost a quarter of your daily requirement in just 100g, it also contains good amounts of other B vitamins, niacin, riboflavin, and folic acid. Equally, it delivers around a quarter of your vitamin C requirements but also provides some vitamin A and some vitamin E.

In terms of minerals, we have mentioned magnesium in the table above but jackfruit also contains fair levels of calcium, vegan iron, manganese, zinc, Phosphorus and a little selenium and copper.

The bare numbers of the nutrition in jackfruit are good if not spectacular, but what makes them better than they might seem is the oft-overlooked factor of what constitutes a serving size. Many nuts, seeds and berries (to use just three examples) are packed with nutrients per 100g but few people would actually sit down and eat 100g of chia seeds (nor would they be recommended to due to the relatively high fat content and number of calories).

When it comes to most fruit and vegetables a standard serving size is typically around 80g. With most, that is the amount that would count as one of your five a day. However, with jackfruit, especially if you using it as a meat substitute, you can actually eat around 150g or even more as a fairly typical serving.

At that level, you would only be consuming around 140 calories but would be getting a fairly hearty hit of a number of valuable nutrients. That said, it is worth noting that much as jackfruit is a great textural substitute for protein, it is not really all that good as a vegan source of protein. Our 150g serving would yield around 2.5g of protein. Now, that isn’t insignificant but it is only approximately 4% of a typical person’s daily needs.

So, all in all, the jackfruit is a healthy, nutritious and flexible fruit. It can be easily grown in a range of climatic conditions and is high yielding. Is it a panacea to all medical ills that can end world hunger? No. Does it make a very decent vegan pulled pork though? Well, let’s find out.

How to Use Jackfruit in Vegan Cooking

As discussed, jackfruits are flexible in culinary terms but there is no doubt that pulled jackfruit is the dish you are most likely to see on menus right now. You can use fresh jackfruit but using canned is probably an easier option for most people. Canned jackfruit tends to be billed as “young”, “green”, “tender” or some combination of those words and that’s exactly what you want for pulled jackfruit.

This is available from many mainstream supermarkets and health food shops. There are also a range of options offered by online vegan specialists, The Vegan Kind.

Jackfruit doesn’t actually absorb flavours especially well and so it’s important that the sauce you use is relatively thick. You also want it nice and flavoursome so you really get the taste of that rather than the jackfruit itself. The sort of sauce you go for is up to you but for us we want the taste of southern America, which means smoke, heat, sweetness and tang.

Smoky paprika, garlic, tomatoes, onions, chilli (ideally chipotles for more smokiness), vinegar (apple cider or red wine work very well), and whatever spices float your boat, with cumin and cinnamon working for us. You can even add a little mustard and soy sauce, whilst seasoning with salt and sugar will also help you get the taste you want.

As said, much as jackfruit is typically associated with some form of vegan pulled pork, chicken or beef dish, it is also very flexible. That same slow-cooked texture makes it great for a vegan “chilli sin carne” (as Hispanophone vegans call a chilli without meat) and similarly it can be used alongside vegan pasta in Italian-style ragùs.

It also works really well in just about any curry, with the strong, punchy flavours and rich sauces perfect for jackfruit. Yet another option is to stuff veg, such as aubergines, peppers or squashes with it. With a nice North African spice blend and some soft onions this is a great way to use jackfruit, with a little vegan cheese on top if you’re feeling particularly indulgent.

In truth, you can use jackfruit just about anytime others might use meat. It fits well in a range of Mexican dishes, as a topping for a vegan pizza, in vegan sandwiches and can be even shaped into vegan ribs or used to create vegan “fishcakes”.

However, the flexibility of the jackfruit goes even further and, as already alluded to, it isn’t just the flesh that can be eaten. What makes this en vogue plant even more helpful in potentially feeding a growing population is that the seeds can also be used.

As with virtually all seeds they are especially nutritious, more so than the flesh, and they have also been linked with a range of health benefits, although the evidence behind some claims isn’t the most rigorous.

It is important that the seeds are not eaten raw as they contain anti-nutrients when consumed in this way, which is to say they contain compounds which diminish the body’s ability to absorb other key nutrients. When cooked, however, this is not a problem and the seeds can be boiled or roasted.

Much as the flesh can be used in a range of dishes, so too can the seeds, with the simplest option being just to eat them as they are. They can be ground into a flour and used just as you would use virtually any other flour and they also make great additions to a number of other recipes.

In most dishes listed above, the seeds should be boiled for around 15-25 minutes and then, once cooled, peeled. From this point, they are good to eat so it’s just a case of deciding how to finish them off and flavour them.

Jackfruit Trivia, For When the Conversation Has Really Dried Up

Nothing reinvigorates a flagging social interaction, be it on a first date, a chat with the slightly odd neighbour or even your hungover friends, like the phrase, “I’ve got some cracking jackfruit trivia guys”. Enjoy…