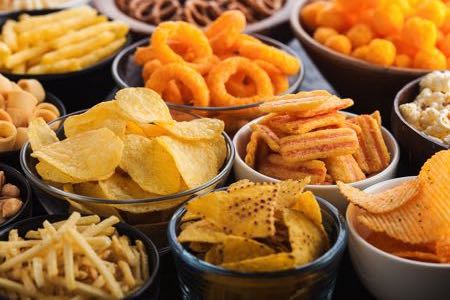 With the crisp market in the United Kingdom worth over £1 billion a year, it is understandable that so many companies want to grab their piece of it. But which crisps are vegan friendly? In this article, we’ll give a detailed (and we do mean detailed!) guide showing the brands and flavours of vegan-friendly crisps available in the UK.

We’ve focussed on the most popular brands (including the supermarket own-brand options) in this article, though there are plenty of niche vegan-friendly crisp brands out there that can be found at various vegan-focussed supermarkets (like TheVeganKind Supermarket) and smaller local health shops.

Note: The crisps in this article we identify are vegan do not contain any animals ingredients based on the best information at the time of writing. As ever, information is subject to change. In addition, some may have been manufactured in factories that handle milk or other animal products.

Here we’ll present the best vegan-friendly crisps based on the most popular crisps brands in the UK, including the own-brand versions from the main supermarkets. Let’s first run through the brands we’re covering, then we’ll go into a lot more detail for each.

One of the most famous crisp brands in the world, Leicester-based Walkers have been going strong since 1948. In 1978 they were purchased by Frito-Lay, a division of the food and drink giant PepsiCo.

Note that at the time of writing all crisps from Walkers are made in factories that handle milk, which could be a problem for some vegans, and certainly for anyone with a severe milk allergy.

Note that Walkers add and remove flavours and make changes to their ranges fairly regularly so if you stumble across any flavours not mentioned in the vegan-friendly table or the list of those to avoid, just check the ingredients. Milk is always marked in bold in lists of ingredients in the UK and that is the main thing to watch out for in Walkers crisps.

Which Walkers Crisp Flavours Are NOT Vegan?

As Walkers are the best-selling crisp brand in the UK (based on the most recent figures in 2019 provided by Nielsen), we have decided to make things simple and also include the crisps they offer that are not vegan.

Walkers fans have plenty to go on based on the above table of vegan-friendly Walkers crisps (assuming the vegans in question are fine with milk products being handled in the same factory). To be on the safe side, and for those who are interested, here are the main Walkers crisps that are not vegan based on the inclusion of animal-derived ingredients.

Despite bosses of Walkers (and Gary Lineker) wanting us to believe otherwise, there are plenty more crisps in the world than just Walkers. So, let’s take a look at the main alternative options for vegan crisp lovers.

Doritos – Which Doritos Flavours Are Vegan?

Also owned by Frito-Lay (PepsiCo), Doritos are flavoured tortilla chips that have been around since the 1960s and have grown into one of the most recognisable snack brands in the world. As we discuss in our Are Doritos Vegans? article, and like many of the crisps in this article, Doritos are manufactured in a factory that also handles milk.

This will be of concern to some vegans, but more so to people with severe milk allergies. Many vegans, however, will judge Doritos and other products by the ingredients they contain, and on that front, there are some Doritos flavours that qualify as vegan friendly. See below to find out which ones.

Okay, there might be only three vegan-friendly flavours of Doritos as things stand, but that should satisfy all but the most fervent of tortilla chip fiends. It is perhaps surprising that the Cool Original flavour is out of bounds for vegans, but they contain milk, cheese powder and milk proteins (for some reason!).

Note that Doritos have regular spin-off products and special flavours, but because they change these so regularly, we’ve stuck to the standard flavours here.

Pringles – Which Pringles Flavours Are Vegan?

Pringles are reportedly the fourth most popular snack brand in the world, and since they were developed by Proctor & Gamble in the 1960s they have been embraced by crisp fans the world over.

And, the good news for vegans, as we discuss in our Are Pringles Vegan? article, is that there are a good number of flavours that are fine for those following a plant-based diet. See below for the details.

With five options to choose from, Pringle-loving vegans are well enough catered for. They will have to forego the other flavours though, including Prawn Cocktail, Salt & Vinegar, Steak, Hot & Spicy, and Steak.

The makers of Kettle Chips were founded in 1978 and produced their first crisps (or potato chips as they would say, being from Oregon, USA) in 1982. They have a factory in Norwich and over 90% of the potatoes they use for UK crisps are sourced from within 35 miles of that factory, which at least gives them something of an ethical edge.

The crisp brands sold by them in the UK are: Kettle Chips, Ridge Cut, Veg Chips, Kettle & More. We’ll list the vegan-friendly flavours of each range in the table below.

That Kettle Foods Inc have created a flavour specifically for vegans is a good sign and we are hopeful they will create similarly vegan-friendly options in the future whilst also making more of their range suitable for vegans where possible.

This famous old Slough-based snack company started life in 1853, making them one of the oldest crisp and snack brands around. As well as producing nuts galore, they also produce a shedload of crisps under the following brands: McCoy’s, Hula Hoops, Tyrrells, Pombear, Popchips, Skips, Space Raiders, Nik Naks, Wheat Crunchies, Discos, Roysters, Frisps, and Brannigans… but which are vegan? Check out the table below. As with some other manufacturers, there is the chance of cross-contamination with milk and egg. 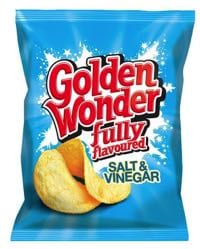 It is fair to say that Golden Wonder, who started life in Edinburgh in 1947, are not quite the crisp maker they once were. Since their heyday they have sold off some of their most iconic crisps including Nik Naks and Wheat Crunchies (to then KP Snacks owner United Biscuits) and Wotsits (to Walkers).

They also sold their Pot Noodles brand to Unilever. Although they are not as significant as they once were in the crisp world, Golden Wonder still have a fair range of crisps that are available in various supermarkets. See which ones are vegan below.

Which Supermarket Own-Brand Crisps Are Vegan?

Some time ago supermarkets came to the realisation that creating their own versions of well-loved food products could be a real money spinner. By creating similar (but often slightly less enticing) products, but charging a good deal less than the big name brands, supermarkets gave consumers the choice of prioritising brand or economic value. This is apparent across many different food product ranges, including crisps.

Here we’ll provide details of all the vegan-friendly own-brand crisps offered by all the major UK supermarkets. Note that products change from time to time and it can be beneficial to check labels occasionally to ensure no non-vegan nasties have been added. Many of the supermarkets detailed are getting increasingly good at marking their products as vegan however.

Note that most of the supermarkets mentioned below also sell a good number of the crisp brands mentioned above (though the discount supermarkets such as Aldi and Lidl often have alternatives to the better known brands we’ve featured).

The biggest supermarket in the UK by market share (according to Statista and Kantar), Tesco was founded by Jack Cohen in 1919. They have a vast number of own-brand products with a good number of crisps… including the surprisingly vegan Bacon Rashers Snacks! Tesco have become increasingly good at labelling their own brand products as vegan friendly in recent years, including all these crisps.

Found in 1899 by William Morrison, initially as an egg and butter stall in a market, Morrisons have since become a little more vegan friendly! Another massive supermarket (the fourth largest in the UK), it is not surprising to see they have a solid number of own-brand crisps, but there aren’t as many vegan-friendly options as some of their rivals offer.

Constantly battling it out with Sainsbury’s to be the UK’s second biggest supermarket (behind Tesco), Asda began life in Leeds in 1949. Despite their size, Asda lag behind some of the other supermarkets when it comes to own-brand products, and especially vegan-friendly crisp options.

As mentioned, Sainsbury’s are usually vying for second place in the supermarket wars with Asda, and appear to be edging ahead in recent times. Founded way back in 1869 in Drury Lane, London, they have built up steadily over the years and were the UK market leader for much of the 20th century. They have a decent number of own-brand crisps, including some that are perhaps surprisingly vegan… Flame Grilled Steak Ridge Cut Crisps, anyone?

Now the food arm of the John Lewis Partnership, Waitrose & Partners actually began life in 1904 as a small grocery store in Acton, in west London. Opening its first supermarkets in the mid-1950s, Waitrose gained a reputation for high quality produce and one that caters particularly to higher end customers (it even has a royal warrant from the Queen and Prince Charles!).

They have a handful of vegan-friendly own-brand crisps, as detailed below. We had hoped for a little more imagination from Waitrose, but they sell so many branded vegan-friendly crisps that their customers will not be left wanting.

Actually made up of two brands, Aldi Nord and Aldi Sud, this German discount supermarket began life in Essen in 1946. It is the Aldi Sud side (known as Aldi to most) that operates in the UK and which causes all manner of strife for the traditional UK supermarkets by having to temerity to charge less for a range of food products. Marketing their own-brand crisps under the Snackrite brand (rather than Aldi) there are a number of vegan-friendly options available.

Some of their Snackrite flavours are vegan friendly, as are many of the various smaller-brand options they sell in their stores, but it’s always best to check individual labels due to the high turnover of products.

Whilst many types of crisp do contain a milk-derivative or other non-vegan ingredient, there are lots and lots of options for vegan crisps fans. As is the case with vegan biscuits, vegan sweets, and indeed many vegan-friendly products, the main issue in relation to vegan crisps is the chance of cross-contamination or cross-contact with animal ingredients during production. The risks are generally small, but those with particular allergies (especially milk) should be particularly vigilant, whilst those who do not even want to chance cross-contamination should look to specialist vegan crisps.

Overall though, at least for the vegans who are prepared to risk the chance of cross-contamination with milk products, there is a vast range of crisp options available. In terms of the supermarket own-brand vegan-friendly crisp options, some fare better than others.

We have seen over recent years, however, that all the supermarkets are making strides in the right direction in terms of effective vegan labelling of products and in producing more (and better) vegan-friendly own-brand products in general, with crisps being just one example.