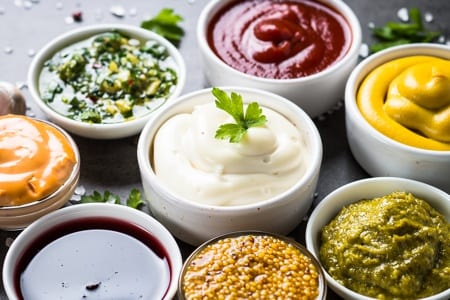 There are few meals that aren’t enhanced by a condiment of some sort, whether vinegar on your chips, mustard on your nut roast or teriyaki sauce on your barbecue aubergine. A condiment is essentially anything you add to a food or dish during cooking but more commonly at the table, with the aim of adding or enhancing flavour. This can cover anything from sauces, pickles and chutneys to vinegars and salt and pepper (though these latter two are commonly classed as seasonings).

In this article, we will give you all you need to know about which of the most popular condiments in the UK are vegan friendly and which are not. We will also present a list of vegan-friendly alternatives for any non-vegan condiments. First, we’ll run through the most popular condiments, so you can see which ones vegans should avoid and which they can slather all over their triple-cooked sweet potato fries without hesitation.

Unfortunately there are quite a few mainstream condiments that are not okay for vegans, including Worcestershire sauce, which is rather gutting. The good news, though, is that there are some very good vegan-friendly alternatives for almost all non-vegan condiments, as we outline below.

Made predominantly from garlic and olive oil, aioli often contains egg yolks as a further emulsifier and hence is not suitable for vegans. There are debates over the differences between regional variations of this tasty favourite, including alioli (or allioli!), with Catalan versions likely to be a simple mix of garlic, oil and salt. If you prefer the slightly richer flavour of the Provençal style condiment, fear not. Luckily, there are some decent vegan-friendly alternatives being produced, and, of course, you could make your own version if you have the inclination.

Used as a sauce or marinade for a range of foods but often associated with barbecued food, the ingredients vary and many are naturally vegan friendly, but check labels as sometimes non-vegan ingredients can find their way into products.

Top Vegan Alternative: There are enough vegan-friendly barbecue sauces on the market (e.g. Tesco’s own brand versions) for this not to be a major issue, but making your own is fairly straightforward using ketchup as a base and adding whatever spices you fancy, such as smoky paprika and cayenne pepper, some cider vinegar, some maple syrup – in short, experiment and refine according to your taste.

Made with eggs and butter, this classic sauce of French cuisine is simply not going to be available to those seeking to follow a vegan diet. But, like with many foods, good quality vegan alternatives are being developed all the time.

Made from fermented fish, fish sauce is clearly not okay for vegans to consume. But, you’re probably getting the gist of this by now, as there are readymade vegan alternatives on the shelf of your favourite vegan-friendly supermarket.

A mixture of tomato ketchup and mayonnaise, and often other ingredients, the mayonnaise renders these sauces as unsuitable for vegans because they contain egg. Marie Rose, also sometimes called seafood sauce, may also contain Worcestershire sauce. The obvious solution here is simply to use your favourite vegan-friendly mayonnaise in place of the standard egg-infested version (we give our favourite in the mayonnaise section below). See Mayonnaise below.

Usually contains egg yolk and butter, like béarnaise sauce, this is another of the so-called mother sauces of French cuisine. And, like béarnaise, there is a very reasonable readymade alternative that is vegan friendly.

Technically a condiment or not, honey exploits and potentially harms bees. For further details, check out our article on Is Honey Vegan? for the full lowdown on vegan honey alternatives, which will vary depending on what you specifically want to us it for (e.g. an ingredient in baking, on toast, in tea – the possibilities are endless).

One of the best all-round honey alternatives is agave nectar, and the sweet liquid that comes from the agave plant is available from most supermarkets.

Made from grated horseradish, vinegar and often other ingredients, some varieties include cream or sour cream, making it non-vegan. Making your own is easy enough using fresh horseradish and a non-dairy addition of your choice. Once again, there are a range of excellent ready-made vegan alternatives.

Because it contains eggs, mayonnaise is unsuitable for vegans, though there are plenty of vegan-friendly alternatives available either in the free-from aisle in most supermarkets or from more specialist food retailers.

As well as pine nuts and basil, traditional pesto also includes some kind of hard cheese, which means it isn’t vegan, as explained in detail in our Is Pesto Vegan? article. As we explain in that article, it’s really quite simple to rustle up your own vegan-friendly pesto by either using vegan cheese or adding a little more salt and oil than usual. If that doesn’t appeal, you can pick up dairy-free pesto in most supermarkets.

Whilst you might imagine that the main offender in salad cream would be cream, it’s actually the inclusion of egg that renders it non-vegan. Unfortunately, the salad cream of choice for many made by the beloved Heinz is not vegan for this very reason.

But, fear not! Because there are a fair few decent vegan salad creams on the market that forego the egg, opting for ingredients, such as xanthan gum (vegan!), potato protein and maize starch instead. Whilst Asda and Tesco do a vegan-friendly version, we recommend Sacla’. And, Heinz, if you’re reading this, we’re waiting patiently for a vegan-friendly version, so get to work!

Made from (usually cow’s) milk, so it is, of course, not vegan. Making your own vegan-friendly sour cream is certainly a good option, which you can do from cashew nuts, for example. Or if you just want to get hold of a pot of the stuff to add to your vegan fajitas, there are a couple of fine options around, though not as many as for some other condiments.

A popular condiment with fish and seafood dishes (which aren’t vegan!), tartar (sometimes tartare) sauce is made of mayonnaise and capers, among other things, and the egg in the mayonnaise renders it unsuitable for vegans. Luckily the folk at Inspired Vegan have saved us the need to make our own vegan version and this goes brilliantly with the increasing range of fish-free “fish” products. 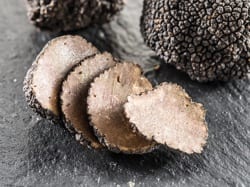 Despite the truffle itself being a fungus and thus vegan, the process of finding truffles often relies on dogs or pigs, some of whom are bred and kept for that purpose, hence some argue the animals are being exploited and so truffles (and truffle oil) cannot be vegan.

Some truffles are found without the use of animals, and these would be fine for vegans, so if you can seek them out, then it’s all good. If not, the unique nature of truffles means that if you are taking the vegan vows to the letter, the exploitation of animals required to find these culinary treats means you will have to give them a miss. 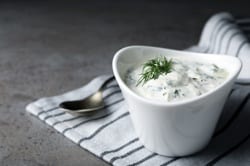 Yoghurt is a primary ingredient of Tzatziki, and yoghurt comes from milk which comes from animals, hence tzatziki isn’t vegan. However it’s really easy to make your own using vegan-friendly yoghurt, e.g. soya-based yoghurt, along with diced cucumber, garlic, lemon juice, olive oil, a few fresh mint leaves and a little salt and pepper.

We are sorry to say that Worcestershire sauce contains anchovies and so vegans should give it a miss, even in Bloody Marys!

Which Condiments Are Vegan Friendly? 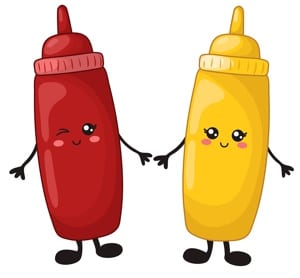 In case vegans are beginning to panic that they’ll have to scrabble around the kitchen for ingredients to make a vegan-friendly version of virtually every single condiment going, fear not. Here is a list of the condiments that are naturally vegan friendly.

As ever, it’s always a good idea to check labels as ingredients change, and if there is anything ambiguous on a label, contacting the manufacturer for clarification can bring peace of mind. In general though, vegans are fine to consume the following condiments.

Check Labels, Find Alternatives or Make Your Own

As we have discussed, there are plenty of tasty condiments that are already fine for vegans to consume. But, alas, some are just no-go for those seeking to eradicate all animal products from their diet.

Thankfully though, there are an increasing number of vegan-friendly alternatives to most of the non-vegan condiments, and with a little experimentation, there is no reason why you can’t create your own vegan condiments that are packed with flavour and healthy ingredients. You never know, you might have the next Reggae Reggae Sauce on your hands (and around your mouth)!