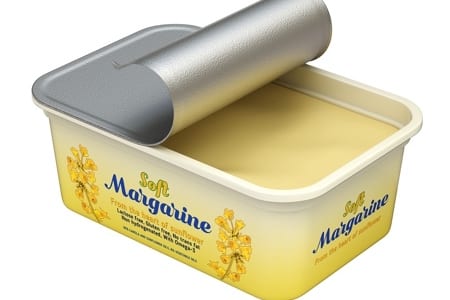 Whether you are a vegan or not, most people with even a basic understanding of veganism and nutrition are aware that butter is not vegan. But what about margarine – the most obvious alternative to butter (other than Vegan Butter, that is)?

As ever, we’ll answer the simple question, is margarine vegan? but we’ll also look in more detail at what margarine is and why it might, or might not, be vegan friendly.

We’ll cut straight to the chase for all you busy vegans, those thinking about becoming vegans and those cooking for vegans tonight. Sorry busy people, but unfortunately life isn’t that simple. As with many of the foods we’ve written about in the Is It Vegan? area of our site, some margarine is vegan and some isn’t.

Clearly, this is why there is confusion surrounding margarine, because there isn’t a simple yes or no answer. Luckily, we’re here to help. We will explain what goes into some margarines that makes them non-vegan and what you need to be looking out for. 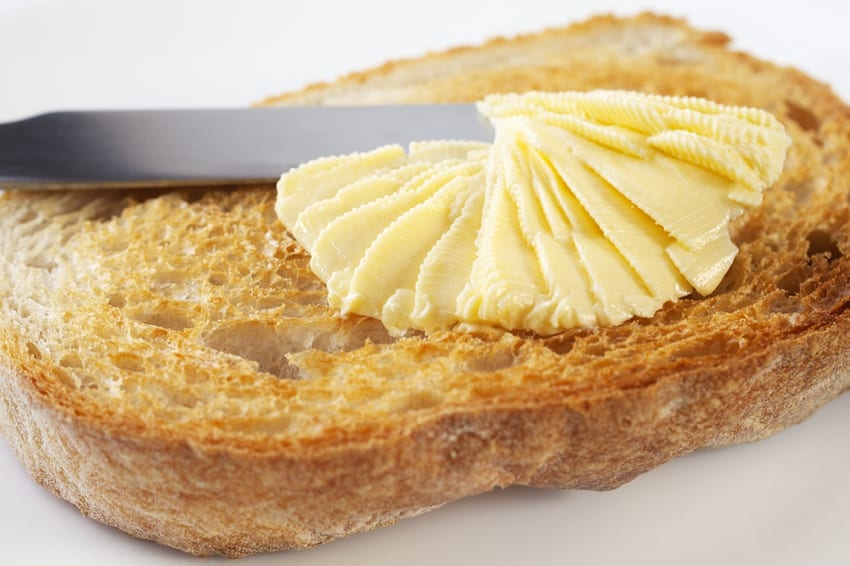 There are many questions that one would intuitively feel are so simple as to be not worth bothering to ask. On closer inspection and when trying to formulate an answer, however, often things are not so obvious. What is margarine? falls into that category.

So, what do we mean by margarine? Well, the concise definition given by the Oxford dictionary is that margarine is “a butter substitute made from vegetable oils or animal fats”. That’s a pretty good definition in truth, but in modern times, margarine has come to be made from a wider and wider range of base ingredients.

On top of that, there are the usual additives that go into many processed foods and frequently have vegans wracking their brains or checking Google. So, whilst it would at first glance seem simple (made from vegetable oil = vegan, made from animal fats = not vegan), sadly, that isn’t quite the case.

Clearly if a spread has been made from animal fat, then it isn’t vegan. However, in truth, the vast majority of margarine these days is made from vegetable fats. The first ever margarine was made from beef fat and we’ll look at that below in our guaranteed-to-thrill History of Margarine section.

However, for a long time now margarine has been viewed as a healthier alternative to butter. Before veganism became relatively mainstream, the primary reason people sought an alternative to butter was to reduce the amount of saturated and animal fat they consumed. As such, most modern margarines are made from olive, soy, sunflower, rapeseed or cottonseed oil.

So, if margarine is not normally made from animal fats but from plants, why then are some margarines still not vegan friendly? As alluded to above, it is the various additives manufacturers use that cause the problems and now we’ll look more closely at what specifically those might be.

As discussed, margarine made from animal fat, rare though it may be, is obviously not suitable for vegans. But below is a list of ingredients that sometimes render vegetable-based spreads as non-vegan.

As said, for many people, margarine and similar butter substitutes are chosen because they are, or are certainly perceived to be, a healthier option. They are not exclusively vegan products and so many brands focus more on replicating the taste and texture of butter than considering animal welfare.

As we explain in our main article, the subject of palm oil and veganism is rather complex. It is considered vegan by the Vegan Society, but we have highlighted it here as it is an ingredient that many vegans are uncomfortable with.

Palm oil production causes mass deforestation and, aside from the environmental impact of this, it also has a major impact on a number of animal species. Loss of habitat and increasing contact with humans is threatening elephants, orangutan and other animals and so many vegans – and non-vegans – look to avoid products made with palm oil.

Some margarines and related products claim their palm oil comes from sustainable sources but once again this is a complex and contentious issue. If you choose to eschew palm oil, “sustainable” or otherwise, avoiding it in butter-substitute spreads should be easy enough as it is usually clearly listed as an ingredient.

That said, somewhat adding to the confusion, some products may just list their ingredients as “vegetable oil” but not actually tell you from which vegetable(s) the oil originated; or they might write “Vegetable Oils in varying proportions” before listing various types (often including palm).

Many of the items that may find their way into margarine that are non-vegan are milk-based and we’ll look at these more closely below. The “milk” may be in a number of forms and we’ll consider the most common ones. Thankfully, most spreads will have a clear warning stating that the product contains milk, making this very easy for vegans to see and avoid.

Buttermilk is one such product and is unlikely to catch many vegans out given the rather obviously milky clues in its name. Buttermilk is a really common addition to products wanting to recreate the richness of traditional butter. That’s all well and good if you’re just looking to watch the calories and saturated fat, but it’s not overly helpful to vegans.

The amount of buttermilk varies greatly from one product to the next but that is irrelevant to vegans who should disregard any margarine that lists this as an ingredient. Buttermilk has many uses in non-vegan cooking but as it is essentially milk (milk with added bacteria no less) it is one to avoid if you are following a purely plant-based diet.

Whey is another milky margarine no-no for vegans to avoid. Whey is usually only found in margarine in very small, trace quantities and so may not be listed in the ingredients. The label will, however, contain the warning “Contains milk” or at the very least “May contain milk”.

Lactose is yet another milk-derived ingredient that is found in some margarines where it is used as a stabiliser. In actual fact, lactose is often added in the form of whey, for scientific reasons that stretch far beyond the scope of this article. None the less, this milk sugar is one to look out for and avoid when it comes to margarine ingredients.

Lecithin is a commonly used emulsifier and is found in many margarines and spreads. It can be made from both plant and animal sources, with a number of both vegan and non-vegan methods employed to produce it.

In our experience, almost all lecithin used in margarine is actually from plant sources and the ingredients usually tell you exactly what plant it came from. We include it here just to be thorough. If you ever see just the word “lecithin”, without either a specific source or “from plants”, exercise caution and assume it may be animal-derived.

Vitamin D is difficult to obtain in the diet, for vegans and non-vegans, with humans usually obtaining most of their vitamin D from sunlight. The UK not being exactly blessed with endless sunny days, vitamin D is a relatively common food fortification, added to processed items to improve their nutrition.

Margarine is one such food but, as we discuss in our article about breakfast cereal, some seemingly vegan foods have been fortified with non-vegan vitamin D. Rather unpleasantly, foods such as cereals, spreads and even orange juice have sometimes been fortified by vitamin D made from the grease from sheep’s wool!

If your particular spread of choice happens to include vitamin D (this should be clear from the label and/or ingredients), unless it expressly states it is vegan, we would recommend contacting the manufacturer or simply picking an alternative.

The History of Margarine

So, now you know exactly what to look out for when it comes to margarine, let us look once again, but in more detail, at what margarine actually is. Margarine was invented in 1869 following a competition, effectively, to create a cheaper alternative to butter that would be affordable for the working classes and the army.

The man behind all of this was Napoleon III, the nephew of Napoleon I (Napoleon Bonaparte, the Napoleon), and the President and then Emperor of France in the mid-19th century. He offered a substantial financial reward to anyone who could invent a more affordable substitute for butter.

The French chemist and inventor Hippolyte Mège-Mouriès won the prize with a spread made from beef tallow. He called his invention oleomargarine, taken from the Latin for oil (or beef fat, depending on whose ancient Latin you trust) and the Greek for pearl, margaritári. Whilst Mège-Mouriès was responsible for many scientific discoveries, it remains margarine (the name was soon shortened and the “oleo” dropped) for which he was most famous.

In addition to being known as “the margarine guy” – hardly what an esteemed chemist would aspire to – Mège-Mouriès sadly never made any money from his most famous invention. He patented the product but after limited success and with margarine seemingly failing to gain popularity he sold the patent to the Dutch butter company Jurgens.

Margarine’s appeal soon spread (sadly, pun intended) around the world, becoming popular in the US in the 1870s, although there are written reports of its consumption in California in 1850. It was also produced in Germany and other European countries around this period and was much-loved for its low price.

As said, it was initially made from beef fat but, at the end of the 19th century, people began to experiment and tried making it with plant oils alongside animal fats. Henry W. Bradley filed a patent for this process and over time more and more margarine began to include both animal and plant fats.

Moving forward to more modern times and manufacturers began to produce products either solely made from plant-based oils or with an increased proportion of them. There is now a huge range of spreads to choose from, with some seeking to be as much like butter but spreadable and/or lower in fat (both saturated fat and total). Others are more squarely aimed at the vegan and vegetarian market.

Over the years there have been various controversies surrounding margarine and its popularity in the non-vegan world has had peaks and troughs since its invention. However, for those who are vegan, the greater choice of margarines and other wholly plant-based spreads is a real boon. They can be used in a range of ways, including cooking and baking, with a variety of textures, flavours and health benefits available. So here’s to Napoleon III!

Like Butter Better? Check out our Vegan Butter article!