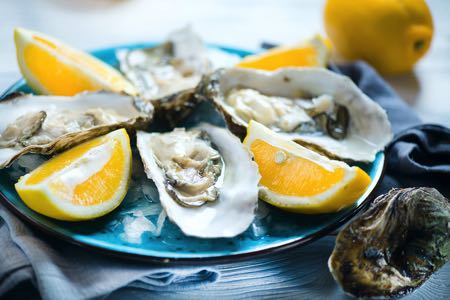 There are some really tricky conundrums to unravel in the Is It Vegan? area of our site, but here we have a very straightforward answer to the question of whether or not oysters are vegan. The answer is no, oysters are not vegan, and anyone who consumes oysters is not a vegan. This is because these bivalve molluscs are part of the biological kingdom Animalia (aka the animal kingdom). So, just as cows, horses, dogs, birds, shark, bees and snails are animals, so too are oysters.

We could well end the article right there; indeed if the only information you sought was in relation to the vegan credentials or otherwise of these filter feeders, you have hopefully discovered what you wanted to know. But if you want to know why a number of vegans have begun to incorporate oysters (and other bivalves) into their diets, or indeed if you want to know whether or not pearls – which are produced by oysters – are vegan, read on.

First, to eliminate any fuzziness on the subject, let us briefly explain a little more about what an oyster actually is. We have a catchy subject for this section of the piece…

As mentioned, oysters are bivalve molluscs, but what does that even mean? Well, bivalves are water-dwelling headless animals that reside within a shell made up of two hinged sections. Molluscs, meanwhile, are a phylum (classification) of invertebrate (animals that don’t have spinal columns) and can include animals as diverse as squid and octopuses as well as snails and slugs.

As well as oysters, of which there are a variety of species, other molluscs that are classified as bivalves include clams, mussels, scallops and cockles. These all appear to reside within two hinged shells (or valves) of some shape or other, but the valves are actually the exoskeletons of the creatures, rather than something they have just happened upon.

The family of oysters usually consumed by humans is called Ostreidae, and these are also known as “true oysters”. Of these, there are a number of species including the European flat oysters and the widely cultivated Pacific oyster (also known as the Japanese oyster or the Miyagi oyster).

The vast majority of shelled molluscs have the ability to create pearls, it is pearl oysters (who are in a distinct taxonomic family to the true oyster) that produce almost all pearls sold by pearl farmers/divers.

Given that pearls are produced by oysters, and oysters are animals, there really is little doubt that pearls are not vegan. This is particularly pertinent with oysters that are farmed for their pearls because these oysters are encouraged to produce pearls by having a foreign object or irritant of some sort inserted into them. This is clearly an example of exploiting an animal, it can be damaging, and it could be argued it is also cruel… if indeed oysters can experience pain or even discomfort (but more on that later).

Even if the oyster in question is not necessarily physically harmed by a farmer encouraging it to cultivate pearls, this is still an example of exploitation of animals in a similar way to how bees are exploited for their honey. Given that the widely accepted definition of veganism precludes such exploitation, there is no way that natural (as opposed to synthetic) pearls can be seen as vegan.

Attempting to examine the likelihood of oysters being able to feel pain, or indeed suffer in any discernible manner, would realistically require us to delve into the nature of consciousness and sentience, and that’s beyond our pay grade for this article. Thankfully, there are plenty of psychologist and neuroscientists who are not only paid to investigate such matters, but who have published research on it (even research that is specifically related to oysters).

In research carried out by scientists of the National Scientific Center of Marine Biology, Far Eastern Branch, Russian Academy of Sciences, entitled Nervous system development in the Pacific oyster, Crassostrea gigas (Mollusca: Bivalvia) there was a suggestion that the nervous system within oysters reacts to potentially harmful substances.

Though it might be a bit of a push to draw the conclusion that oysters therefore experience “pain” as we know it, they are certainly adapted to avoid damage. This clearly has evolutionary benefits (as avoiding damage tends to mean an organism has a greater chance of living long enough to reproduce), but whether the stimuli to illicit evasive action (which in the case of an oyster involves it closing its shell) are “felt” by the oyster or are merely detected on an unconscious level is seemingly impossible to tell as things stand.

With that in mind, given the very real possibility that oysters even might be able to experience pain, it would seem likely that all but the most flexible of vegans would view eating oysters as contravening vegan ethics. Even more so given that fresh oysters are often consumed while still alive (or only just dead).

Despite what has been suggested by research in relation to oysters, and indeed in relation to the nervous systems of other bivalves and molluscs, there are some “vegans” who insist it is not a contradiction to consume oysters and still refer to themselves as vegans. Some who identify as “vegans” but are happy to eat seafood prefer the term “seagan”. This term is typically taken to mean someone who eats any fish or seafood, as opposed to just oysters but some oyster-eating-vegans also use this terminology.

The argument of one widely read article advocating that vegans can eat oysters goes along the lines that “oysters are not in the plant kingdom, but when it comes to ethical eating, they are almost indistinguishable from plants” on the basis they do not have central nervous systems. But, as discussed, they certainly have nervous systems, just not nervous systems that are structurally akin to those found in vertebrates.

Apart from the “oysters can’t feel pain” argument, seagans sometimes point towards the fact that oysters and other bivalves can be very effective sources of Omega-3 fatty acids. Fair enough, but as we explain in our article on the subject, there are plenty of decent Vegan Sources of Omega-3 available, both through vegan foods (as detailed below) or through vegan-friendly Omega-3 supplements, for those who choose that option.

With these sources of the most important of the three Omega-3 fatty acids being readily available on a purely vegan diet, there really is no need for vegans following a well-balanced plant-based diet to start seeking out shellfish with which to supplement their nutritional intake.

Don’t be Shellfish – Oysters Are Definitely Not Vegan

This is quite a simple one when it comes to drawing conclusions: oysters are animals; vegans do not consume animal products; vegans should therefore not eat oysters. Most vegans would also want to forego pearls too on the basis that they definitely exploit oysters and could almost certainly be deemed to be (at least occasionally) cruel to them too.

The whole “oysters don’t feel pain” argument is something of a red herring (which aren’t vegan either, just for the record!). Whilst the phenomenology of oysters is (for now at least) something of a mystery to humans, there is certainly at least a chance they could both possess consciousness and also have the ability to experience something we might recognise as pain. Irrespective of the precise nature of what oysters can or cannot experience though, they are animals, and hence they are off the menu for vegans.

That said, much as we have painted a very one-sided argument, as with all aspects of veganism, everyone must draw their own conclusions. Everyone has their own red lines and whilst we don’t feel most vegans would consider someone who eats oysters as being vegan, who are we to say? We wouldn’t say that oysters are a grey area but they are, perhaps, on the fringes of the shade!