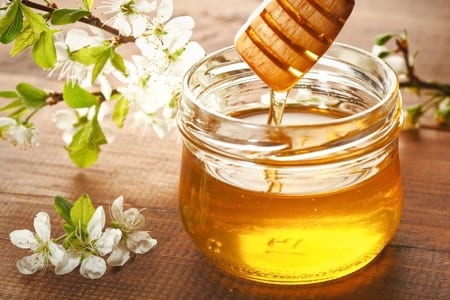 Though there has been much debate about whether or not honey can be classified as vegan, most vegans fall firmly on one side of the argument: honey is not vegan.

The main reason for this stance is rather simple. It is impossible to obtain honey from bees without exploiting them in some way. Honey bees (just one of around 270 species of bees in the United Kingdom) produce honey as a food source for bees, not humans. Harvesting the honey they produce, therefore, causes the bees to be deprived of their natural food source. As well as certainly being exploitative, this could also be deemed somewhat cruel.

If you are satisfied that honey is not vegan-friendly and you want some ideas for vegan substitutes for honey, we’ve created a summary table below. Whether you want a honey substitute for cooking, to put on your toast or to add to a hot drink as a sweetener, here are some options. If, however, you would like to understand some of the arguments for and against honey being vegan, read on below.

While these vegan-friendly honey substitutes differ in consistency and flavour, they can generally all be used in baking, as toppings for toast, pancakes, cereal and anything else that takes your fancy, as well as all the other things people might use honey for.

Why Do Some People Consider Honey to Be Vegan?

Despite this appearing to be a very clear-cut case of a product going against the accepted philosophy of veganism, many arguments have arisen that attempt to justify honey being classified as vegan-friendly. Here we will outline some of these arguments and provide relevant information to help you decide for yourself whether honey is vegan or not.

Bees Are Animals, But Not Mammals

Vegans refrain from using products that involve the exploitation of or cruelty to animals and also refrain from consuming food derived from animals. When it comes to eggs, milk, or a piece of meat, there is no disputing the animal origins of the products in question. Some people, however, appear to struggle with the concept that bees (and indeed all insects) are, in fact, animals.

The New Oxford Dictionary of English (Pearsall, 1998, p.65) defines an animal as: “A living organism which feeds on organic matter, typically having specialized sense organs and nervous system and able to respond rapidly to stimuli”.

Even a rudimentary knowledge or a little observation of honey bees would allow someone to recognise that they certainly fit into that definition.

Wikipedia, meanwhile, defines “animals” as, “multicellular eukaryotic organisms that form the biological kingdom Animalia”. Without wanting to delve too deeply into the biological taxonomy of the honey bee, given that a bee is evidently not made up of a single cell, they must belong to the Eukaryota domain. Within this domain lie five (or six according to some text books) kingdoms: Plantae, Protista, Animalia, Chromista, and Fungi.

Scratch the surface of these kingdoms and it is abundantly obvious that bees can only be categorised within the Animalia kingdom, hence, they are animals. Okay, they are not mammals, but, in scientific terms, an invertebrate with an exoskeleton, such as a bee or any other insect, is certainly an animal.

According to the British Beekeepers Association, “A strong [bee] colony can produce 2-3 times more honey than it needs”. That means us hungry humans can just skim a little of the top and let the bees have more than enough to see them through the winter. Except, it doesn’t tend to work like that. The British Beekeepers Association immediately go on to say, “If necessary the beekeeper can feed sugar syrup in the autumn to supplement for the loss of honey.” This is not so great from the point of view of a vegan – or indeed the bees – who would then miss out on the many nutrients contained within honey!

The problem, of course, is that attempting to assess the dietary requirements of a given hive of bees, and then devising a way that allows the collection of the excess honey only is nigh on impossible. Though there are a growing number of beekeepers who practice so-called “balanced beekeeping”, whereby they attempt to treat the bees as ethically as possible, there is no real way of knowing whether or not the bees themselves suffer.

Aside from that, the vast majority of honey found in supermarkets comes from largescale industrial beekeeping operations that have been known to clip the wings of queens to stop them leaving to start new colonies, to cull hives after harvesting the honey to reduce costs and to feed the bees sugar water (as opposed to their own honey) to increase profits.

We Need Bees to Protect the Environment

It is true that honey bees help to pollinate many of the plants and flowers we find in our countryside and that includes most of the plants we humans rely on for food. But it is also true that honey bees are just one variety of around 270 species of bees that have been recorded in the UK and more than 20,000 species worldwide. As well as the many wild bees, other pollinators include flies, beetles, wasps, among other animals.

The very fact that there are a variety of bees living free in the wild has benefitted the environment, as some bee species are much more effective than others when it comes to pollinating specific plants. For example, the Red Mason Bee can be more than 100 times more efficient than honey bees when pollinating apple blossoms, which should cheer cider lovers.

But, there is an argument that the mass breeding of honey bees can have a detrimental effect on wild species and other wild pollinators. According to various research studies on the subject, managed colonies of honey bees can have negative effects on wild bees, sometimes monopolising the ever-reducing nectar and pollen resources, whilst they can also be a source of pathogens to wild bee species.

Can Honey Be Made Without Harming Bees? 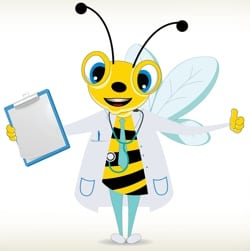 There is a theory that honey can be extracted from a hive in such a way that bees are not harmed. This might be true. If it is accepted that a hive has produced an excess of honey, and that only excess honey is harvested. And if no bees are harmed during the honey harvest either due to the smoke used to pacify them or as a result of a human’s large, gloved hand accidentally squishing them when trying to extract the honey.

In those circumstances it is possible to harvest honey without causing actual harm to the bees in question. But, really, who is going to monitor that? And, how many commercial honey operations are going to go to anything like that trouble when it would cut big chunks out of their profit margins?

Irrespective of the harm or otherwise caused to the bees, there is certainly no question that the bees are exploited when humans take their honey. And, exploiting animals gives the practice a big black cross next to the “not vegan” box.