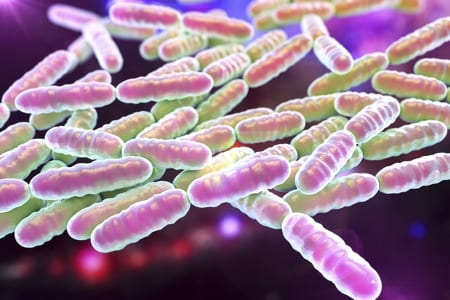 Most people may have heard of lactic acid in association with exercise, especially endurance sports and high intensity activities, such as cycling and running. It is created naturally in the body during exercise, as a waste product of anaerobic respiration. It has the chemical formula C₃H₆O₃ and has a number of negative impacts on athletes.

Sport aside though, vegans, be they runners or those that only get as far as running a bath, may be concerned about lactic acid, which is contained in sourdough and some wines among other things, because of the prefix “lac”. This comes from the Latin for milk and so it is easy to see why many people assume there is a connection between lactic acid and milk. Dairy milk isn’t vegan and so people who are aware of lactic acid’s etymology may well question if they can use products that include lactic acid or are processed using it.

Thankfully, when it comes to lactic acid, vegans are more than likely safe to proceed. This is an etymological case of 2+2=5, and people having just enough information to be dangerous! The fact that the body naturally produces lactic acid should be a clue in itself. What is a vegan supposed to do, have surgery to rewire their metabolism so they no longer make it?

What is Lactic Acid? 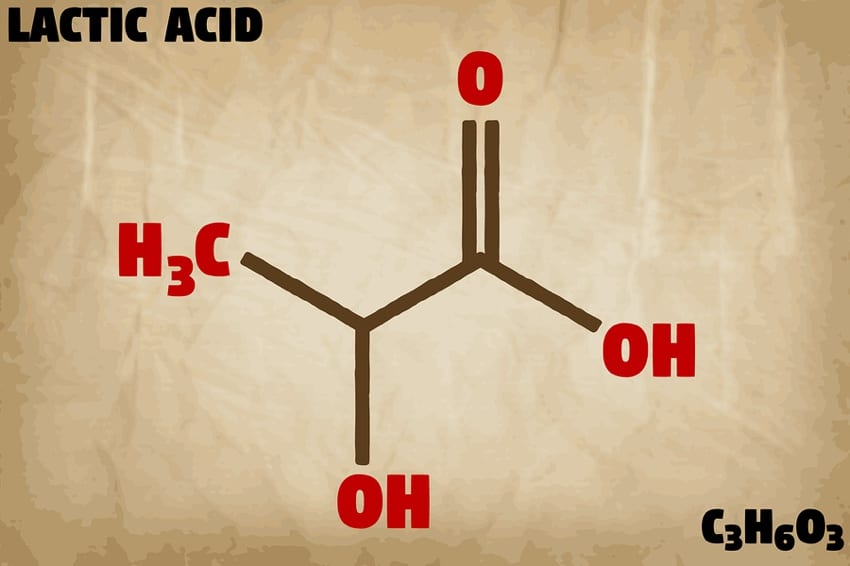 Of course, not everyone knows that this organic acid is produced by humans and even those that do could assume that the lactic acid used commercially is derived from animals. In fact this latter possibility is perfectly plausible and logical in some regards.

As with many chemical compounds, lactic acid took its name due to the product it was first isolated from. In 1780, the Swedish chemist, Carl Wilhelm Scheele, isolated it from sour milk. In a similar way, lecithin was first isolated from egg yolks and takes its name from the ancient Greek for that substance. This is why we say that, in many ways, it is sensible and reasonable for a vegan to have their doubts about lactic acid.

Anybody who has been vegan for a while is likely to have come across lecithin as for a long time it was a major vegan troublemaker. It is used as an emulsifier and lubricant in a wide range of products, including chocolate, bread and margarine. Whilst it can be made from eggs and other animal sources, it is now almost always produced from plants in a vegan-friendly fashion.

On a product’s ingredients you will usually see it listed as “lecithin from soy”, “lecithin from sunflower” or similar. This wasn’t always the case and vegans would need to either assume the lecithin was non-vegan or check with the manufacturer.

Is Lactic Acid Derived from Animals?

Based on the above information, some may scoff at people asking if lactic acid is vegan or not. But, in theory, there is no reason why the lactic acid found in commercial products might not be derived from animal milk or other animal products.

Indeed, in relation to lactic acid, there seems to be something of a grey area. We have said already that “when it comes to lactic acid vegans are more than likely safe to proceed”. To the best of our knowledge, you are highly unlikely to encounter lactic acid that is produced from an animal source.

More often than not it will be naturally occurring and – assuming you aren’t eating something obviously non-vegan to start with – the lactic acid will therefore be vegan. However, the grey area concerns uses of lactic acid where it is added (see below).

It is our understanding that such commercially produced lactic acid is very unlikely to be made from animals. Many sources flatly state that lactic acid is vegan but PETA (People For The Ethical Treatment of Animals) say that it is:

Typically derived from plants such as beets. When animal-derived, found in blood and muscle tissue.

Lactic acid most certainly can in theory be made from animal sources, such as milk, and the fact that PETA include it on their list of animal-derived ingredients is enough for us to at least have our doubts. Now, we happen to know that PETA is far from the gospel on many such issues as this and they aren’t immune to factual errors or gross oversimplifications. That said, it seems impossible to find a reliable source that confirms that all commercial lactic acid is vegan, and so (albeit minor) doubts must remain.

How is Vegan-Friendly Lactic Acid Produced?

So, if lactic acid is vegan, it is safe to say it is not produced using milk or any other animal products. It may surprise you that 97% of lactic acid is made by “milking” marathon runners at the end of major global races, such as the London and New York marathons. Okay, that isn’t really true. But it would have surprised you.

The situation with lactic acid is rather confusing because it occurs naturally in so many foods and can be used in a number of different ways. To further muddy the waters, lactic acid is also added to many milk-based products. Fermented milks and yoghurt, such as Georgian matsoni, Icelandic skyr, kefir and even just plain old sour cream. Such foods are obviously not vegan friendly and the fact that they contain lactic acid creates an unfair association because it is the milk that is the issue, not the lactic acid.

Another confusing factor is the existence of other “lac” words that vegans do need to avoid. For example, lactose is milk sugar, in simple terms, and is not suitable for vegans. But let us return to the question: how is vegan-friendly lactic acid produced? 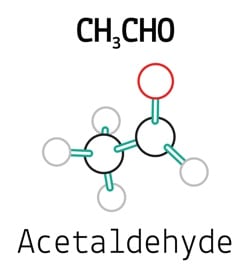 Every year hundreds of thousands of tonnes of lactic acid are produced and it can be made in a range of ways using different base products. It can be synthesised using a chemical production process that begins with acetaldehyde. Here at VeganFriendly.org.uk, we’re most familiar with acetaldehyde as a hangover-causing chemical-nasty that is a by-product of the body processing alcohol from our favourite vegan wines.

You wouldn’t be surprised to hear that lactic acid manufacturers don’t harvest acetaldehyde from those poor folk who are struggling with hangovers the morning after big nights out. What is important, though, is where they do obtain it and the main sources are coal and oil, both of which are to all intents and purposes vegan friendly.

The majority of commercially produced lactic acid is made via fermentation but once again the key here is what is used as the starting point. Lactic acid can be made from just about any sugar and usually pure sucrose or some other simple sugar is used, although, to reiterate our earlier point, in theory the sugars could be of animal origin, for instance lactose, or milk sugar.

That means that lactic acid, however you might encounter it, should be vegan friendly. What it does not mean, though, to again reiterate an earlier point, is that all foods and products containing lactic acid are vegan friendly. Equally, whilst the “lac” or “lact” prefix does not necessarily mean a given item is derived from milk, there are many that are and so it certainly pays to be cautious. If in doubt, just check out our comprehensive Is It Vegan? section.

Some wines and beers also naturally contain lactic acid, whilst hipster favourite sourdough gains its unique flavour thanks to lactic acid created by the fermentation of the dough. In addition, Scheele’s (the Swedish chemist, in case you have forgotten) discovery can be found naturally in soured milk products such as those mentioned earlier.

In addition, fermented and pickled foods, such as kimchi or sauerkraut, increasingly viewed as being excellent for health and the gut’s microbiota, contain lactic acid. Bacterium naturally occurring on the fermented vegetables use the sugar of the veg themselves to create lactic acid. This age-old process is actually called lactic acid fermentation and is perfectly vegan (assuming the base ingredient is too).

On top of these items where the lactic acid occurs naturally, it is also added to a range of other foods and goods, including pharmaceuticals and cosmetics. When it comes to food, knowing which E numbers are vegan and which aren’t is an excellent vegan skill to have and if you see E270 on a list of ingredients you might want to investigate further. This is lactic acid and as a food additive it is used as a preservative, antimicrobial agent and to flavour, cure or pickle, aping the natural process undertaken when, for example, kimchi is made. In household goods, cosmetics and other uses you simply need to look out for lactic acid.

If In Doubt, Check with the Manufacturer

Unfortunately when it comes to lactic acid we have to roll out the “check with the manufacturer” card. Ultimately, unless a food, drink, or household good is certified as vegan friendly, there is no 100% guaranteed way of being sure the lactic acid has been produced from non-animal sources.

As far as we know, there is no labelling that makes the source of lactic acid clear in the way that most users of lecithin do. Now, that may be because all lactic acid is vegan but, unfortunately, that is not something we can be sure of.

Cargill, perhaps the world’s largest producer of lactic acid, uses plant-based sugar in their process. Another of the major manufacturers, Henan Jindan Lactic Acid Techn. Co, make theirs from “natural corn starch by advanced bio-fermentation and refining technology”. Dutch-listed giant Corbion, who bill themselves as “the global market leader in lactic acid, lactic acid derivatives”, produce their lactic acid by fermenting carbohydrates (sugars), so their product is also vegan friendly. At the other end of the spectrum, small producers, such as the UK-based Special Ingredients Ltd, produce lactic acid powder that is specifically sold and marketed as being vegan friendly.

So, whilst we may not have a definitive answer, we can say both that vegan-friendly lactic acid exists and that it is prevalent. 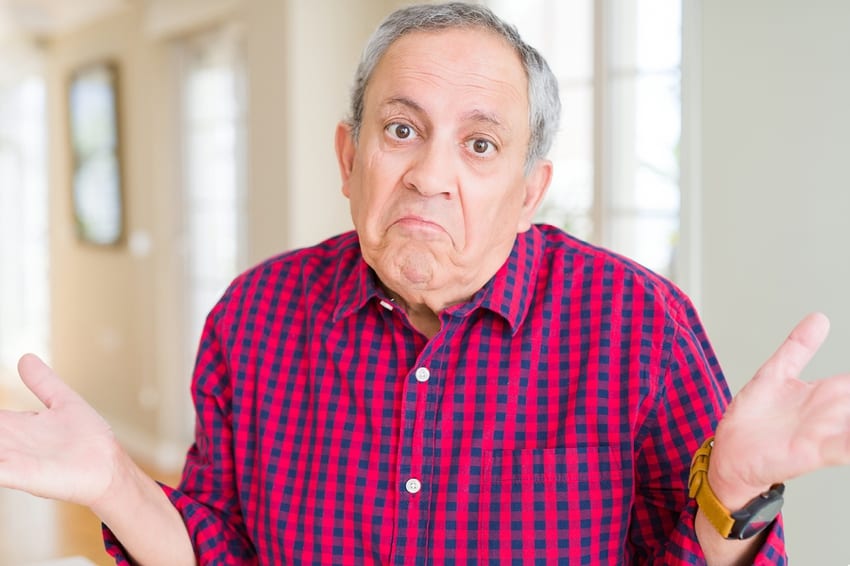 We hate to use the word “probably” as we know for many vegans it just isn’t good enough. To say something “probably” hasn’t caused animal suffering is, for some, to say nothing at all. However, let us start with what we can definitely say.

By that last point, we don’t mean to belittle the issue. Simply that, as we have said before, there is a law of diminishing returns when it comes to veganism. By quitting meat, dairy and eggs you have taken a huge step – a giant leap, in fact – towards saving animals and reducing their suffering.

Rather than spending time investigating the intricacies of lactic acid (we’ve tried it… believe us, it isn’t fun!), some would argue your time could be better spent educating, persuading and encouraging others to join the vegan world.