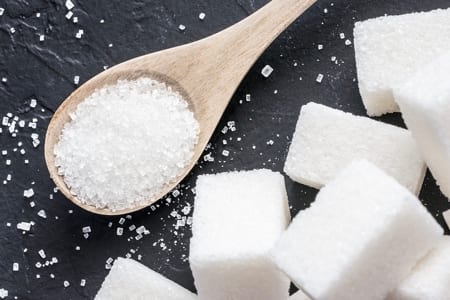 A spoonful of sugar might help the medicine go down, but it could also rot your teeth, give you diabetes and cause you to pile on the pounds. There is no denying, though, that people with a sweet tooth really would struggle without at least a little sugar to sweeten their lives. Those following a vegan diet, however, might have some cause for concern in relation to at least some kinds of sugar. Here we give you the facts and information you need as we answer the question, is sugar vegan?

We’ll go into detail about the whys and wherefores later, but – just in case you are holding a sugar-laden spoon poised above your cuppa, we will give you the quick answer: sugar is sometimes vegan. Okay, hold on to your silver. As with many of our articles in the Is It Vegan? section of our site, there are ambiguities aplenty. And, while there are many types of sugar that are indeed vegan friendly, unfortunately, a lot of the most commonly consumed refined, white sugar is not vegan.

Why Sugar is Not Always Vegan-Friendly

If sugar comes from plants, it must be vegan, right? It is true to say that the sugar humans consume comes from plants (see below for more details), and if the sugar was extracted from the plant in question and served up to add to your coffee or sprinkle on your cereal, all would be fine and dandy. As such, any completely unrefined or “raw” sugar is therefore fine for vegans to consume.

Alas, it is the refining processes that is sometimes used (rather than the raw materials themselves) that can cause the issues for vegans. Specifically it is the use of bone char – the charred bones of animals – to filter out any material that would stop the sugar looking so white. Bone char is sometimes used in the processing of sugar, mainly that which has been extracted from sugarcane, rather than sugar beets.

Is Any White or Brown Sugar Vegan?

There are many sugar producers who choose not to use bone char in their refining processes. There are alternative methods used by sugar producers that can have the same decolourisation effect as bone char, with an increasing number of companies turning to either granular carbon (from non-animal sources) or an ion-exchange resin or polymer. Not all of them make this obvious on their packaging, but some do. Check out our Vegan-Friendly Sugar page for the full lowdown.

When assessing the information relating to whether or not a food or product can be classified as vegan friendly, we must of course understand what it is we are talking about. In general terms, sugar is an edible, sweet-tasting carbohydrate that dissolves in water and can be used as a source of energy by humans and other animals.

There are many different types of sugar and it can be obtained from many different plants. The sugar most commonly consumed by humans is sucrose, which is extracted from sugarcane and sugar beets (though it also occurs naturally in other plants). A molecule of sucrose is made up of both glucose and fructose, these two of which – along with galactose and xylose – are classified as simple sugars (or monosaccharides), as opposed to the compound sugars (or disaccharides) of sucrose, lactose and maltose.

The body uses simple sugars as a source of energy and to help form proteins, though we can also break down long-chain carbohydrates found in starchy foods such as rice and potatoes into the short-chain sugars that can easily travel around the body in the bloodstream.

Molasses, also known as black treacle, is a by-product of the sugar refining process. The molasses used to make brown sugar is from sugarcane, as the molasses from sugar beets is not as palatable to humans.

Molasses can be bought as a standalone vegan-friendly product and used as a sweetener or cooking ingredient. The refining process of white sugar involves a repeated process of boiling, crystallisation and spinning in a centrifuge, which results in the extraction of molasses in stages of varying sweetness and viscosity.

Here we outline some of the most popular types of sugar available to buy in the UK. Note that while we state some types of sugar, for example demerara sugar, are vegan-friendly, it is important to note that this is based on the conventional processes of production.

Some manufacturers may well stray from convention and, for instance, produce demerara sugar by simply adding molasses to refined white sugar (though, technically, if this is the case, it should be labelled as “brown sugar” not demerara).

The easiest way to ensure your sugar is safe for vegans is to buy sugar that states it is vegan friendly on the packaging. Often buying unrefined or raw sugar will generally mean it has not been near any bone char, though it pays to double check with a manufacturer to be on the safe side.

Alternatively, you could opt for an alternative to sugar that you know to be vegan friendly. We list some of the main ones in our is honey vegan? article, as many will do the same job here, particularly when using them as a sweetening ingredient in cooking. Some of the best options include: