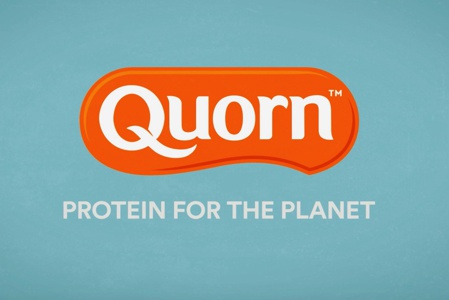 Most people in the UK have probably heard of Quorn, in large part thanks to Mo Farah’s rather badly acted adverts. Mo’s an Olympic superhero though, so we’ll forgive a little flat acting considering he can run for 10,000m faster than we can sprint!

Quorn also has an extensive range of products and a big presence in just about every supermarket, so whilst we’re confident people are familiar with the product, we’re less sure that people know exactly what Quorn is made from and, more importantly, whether or not it is vegan. But luckily we’re here to enlighten you on all that.

Like many items in our is it vegan? section, when it comes to Quorn there is no single yes or no answer. However, unlike a lot of the foods we have considered, the answer is at least simple to find out. Unlike many food producers, Quorn make it very clear what in their range of products is vegan and what isn’t. That makes it really simple for anyone following a plant-based diet to know which products they can and can’t eat as they browse through the meat-free section of the supermarket.

Quorn have a clearly marked vegan range, with each product labelled as being suitable for vegans. Accredited with the Vegan Trademark and logo from the Vegan Society, there is none of the normal checking of ingredients required. As of May 2019, Quorn’s vegan range includes:

We say that this is correct at the time of writing because Quorn have made more and more of their products vegan over the last few years. Ideally, we are sure they would like to make all Quorn items vegan friendly but some still use a small amount of egg white or milk derivatives to bind or stabilise them. Quorn themselves say that “we are constantly investigating different ways to produce Quorn products to make them suitable for vegans”. So, hopefully, before long the entire range will be available to those following a wholly plant-based diet.

That said, there are more than 100 different Quorn products in total, and thus, lots of them still do use non-vegan ingredients, albeit in very small quantities. Many of these may not be widely available and as you can see from the list above, lots of the most popular Quorn items are vegan.

The company have stated that they are trying to make more products vegan friendly but that “due to the technicalities involved as well as a shortage of potato protein – a vital ingredient – we cannot at this stage commit to making the entire Quorn range completely vegan”.

Are Quorn Products Tested on Animals?

None of the currently available range have been in any way tested on animals but for anyone taking things to the extremes, it should be noted that mycoprotein was given to animals during its development. Quorn is made from mycoprotein (of which more below), which was first created in the late 1960s.

In order to be passed as safe for human consumption, it was deemed necessary that mycoprotein be fed to animals first. A series of feeding trials took place over a long period of time but neither Quorn nor mycoprotein has used animal trials since 1995. Moreover, the company are committed to ensuring that no further animal tests or trials will take place.

Considering how many animals have effectively been saved by the millions of people who eat mycoprotein-based products as meat substitutes we would argue that to not eat Quorn because of these historical and legally required trials would be counter-productive. However, if this is something you feel very strongly about then at least Quorn are quite open about the past animal testing that has taken place on mycoprotein.

What is Quorn Made From?

As said above, Quorn (which is a brand name, rather than an actual foodstuff) is largely made from mycoprotein (which itself is a trademarked term). Mycoprotein is made from fungus and whilst some people believe Quorn is mushroom-based, this isn’t the case. Initially Quorn was marketed as being “mushroom in origin” but was forced to change this after pressure from advertising authorities and regulators in the US and UK.

Whilst all mushrooms belong to the fungi kingdom, there is a huge difference between the sorts of mushrooms one might eat and the fungus that is used to make Quorn. As such, Quorn now make it clearer that the product is derived from a fungus/mould and despite the potential negative connotations of these words, the product has continued to grow in popularity.

How Quorn Was Discovered

The key ingredient is Fusarium venenatum, a micro-fungus that was discovered in the UK in the 1960s. Its high protein content made it of interest to scientists who were concerned about feeding a growing global population. Sounds familiar. The scientists assessed various different fungi to see which would be best suited to their project. Over three years, it was decided to use Fusarium venenatum as it was cheap and easy to produce, offered a good, meat-like texture, had a reasonable flavour and good levels of protein and fibre as well.

After an extensive testing period to ensure it was safe to eat, the first mycoprotein products were launched in 1985. The patent for mycoprotein was filed at this time and with EU patents only valid for 20 years, this means other companies have been free to create mycoprotein products for some time now. There are alternatives to Quorn but due to the head start the company has enjoyed in terms of technical know-how and marketing, it is Quorn that very much leads the way.

How is Quorn Made?

The fungus is grown in huge fermentation tanks and knowledge of this process has, for a long time, allowed Quorn’s manufacturers to produce mycoprotein more cheaply than their rivals. Substances including glucose, water, potassium, magnesium and phosphate, along with the Fusarium venenatum itself, are added to the 40m high sterile fermentation tanks.

The environment is highly controlled with the perfect temperature, acidity and oxygen levels enabling the fungi to thrive. During this process, ribonucleic acids (RNA) are removed from the product (excessive RNA had hindered previous attempts at fermenting protein-based foods).

When the mycoprotein is ready to harvest, it is removed. It is given texture before being seasoned and mixed with egg white, or, in the case of the vegan range, potato protein. It is lightly steamed for around half an hour and then chilled before being cut into shape for whatever product it is being used for. At this point, the Quorn is frozen and this further enhances the meaty texture as the ice crystals that form push the fibres of the finished product closer together.

The precise ingredients and seasoning will vary from one Quorn product to another, with some being more akin to fully formed ready meals and others more a straight “naked” meat substitute. You can see the ingredients for Quorn Vegan Fillets below:

As you can see, by and large the fillets are mainly mycoprotein, with almost 90% of the end product being the base ingredient. With the next two ingredients essentially being plant-based proteins and fibres, there isn’t too much to be concerned about. However, there is no doubt that all Quorn products are highly processed and they certainly won’t be featuring on any raw vegan menus!

In his enlightening book, In Defense of Food: An Eater’s Manifesto, Michael Pollan argues that one shouldn’t “eat anything your great grandmother wouldn’t recognize as food” and also to avoid ingredients you can’t pronounce.

We can just about get our mouths around calcium chloride, calcium acetate, carrageenan, sodium alginate and indeed mycoprotein itself, but would our great grandparents recognise them as food? How would they react if you were to suggest, “Try this ‘chicken’ fillet, Gramps. It is made from fermented fungus”?

As said, there is no escaping the fact that the entire Quorn range is processed. Quorn themselves are open about this, stating that they are processed but are not genetically modified. By and large, it is true to say that processing food is not great. It is rare for a processed end product to be healthier than the raw starting points. There are exceptions, of course, but in general, the less processed a food is, the healthier it tends to be, which is not to say that processed might not taste nicer – that’s often the point!

But be it an orange versus orange juice, a bunch of grapes or a glass of wine, or a wholegrain versus a milled one, in general, processing a food reduces its nutritional content. This, plus various health scares over the years and the fact that you have more control over what you eat when you cook from scratch, means that some people have an automatic distrust and dislike of all processed foods.

This is perhaps a little unfair. Many mass-produced foods may be less wholesome than if you made them yourself. But equally many, especially if you buy a better quality product, are by and large, very similar to what you would produce at home. Processing, whether done at home or in a factory, creates a different end product and unless you are committed to a raw vegan diet then occasionally enjoying foods, such as bread, jam, pasta, breakfast cereals, crisps and perhaps even a vegan sausage roll is part of everyday life.

Whilst some may have their doubts about consuming a batch of mass-produced fungus bound together with processed potato, some spices, algae (sodium alginate) and seaweed (carrageenan), overall, we have to say that Quorn (and other mycoprotein products) are extremely healthy.

Having been eaten for almost 40 years and, according to Quorn, having been used to create more than five billion meals in more than 20 countries, it seems reasonable to assume that the product is safe. There are some scare stories regarding allergies but according to the UK Food Standards Agency, only around 1 in 150,000 people will have a reaction to Quorn. That compares rather favourably to the one in 200 people intolerant to soy or the 1% (one in 100) who have coeliac disease and are seriously intolerant of gluten.

So, given it is almost certainly safe to eat, the proven benefits of its high protein, high fibre, low fat nutrition should be praised. They are also mainly low in salt and compare favourably to meat in most regards whilst also standing up well against other vegan meat substitutes, such as seitan and tofu.

A range of studies have also indicated that Quorn can increase satiety (a feeling of fullness), reduce levels of bad cholesterol and has a low impact on blood sugar. As an alternative to meat, there seems little doubt that Quorn is healthy option, delivering sufficient bioavailable protein for well-being whilst also being lower in calories and saturated fat.

Without wanting to sound like the official Quorn marketing board, Quorn is also very good for the environment compared to traditional meat farming. Quorn production requires much less water than the farming of any meat, needs significantly less land and produces far fewer greenhouse gasses.

More than half of the brand’s range carries the Carbon Trust Footprint for reducing CO2 and so switching from meat to Quorn will undoubtedly have a beneficial impact on the planet. Whilst it should be noted that many meat-alternatives also offer similar benefits, the following is true of Quorn production:

Quorn trivia might not be the most exciting sphere of pub-quiz knowledge in the world but, none the less, here are our top Quorny facts!