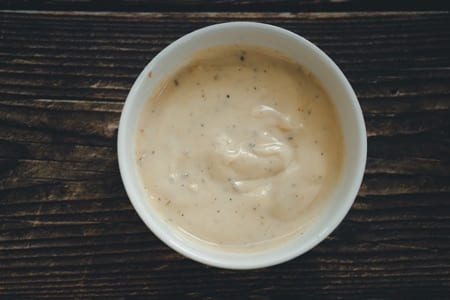 Salad cream is a strange condiment in that it is extremely popular, but it is also hard to pin down in terms of its forte. It can be utilised to add a bit of zing to sandwiches, as an alternative to mayonnaise on chips or potato salads, or as a general sauce for everything from your favourite vegan barbecue food to pizzas. But does anyone actually add it to salads? Possibly the strangest thing we’ve seen is it offered with a fruit salad in a Chinese restaurant, but that’s a whole other story!

Leaving the best use of salad cream aside, a more important quandary to address is the question: is salad cream vegan? Alas, most salad creams out there (including Heinz) are NOT vegan because they contain eggs, or some derivative of eggs.

The good news is that there are a growing number of tasty vegan-friendly salad cream options available to those following a plant-based lifestyle. Let’s run through the top vegan salad cream options straight away in case you were seeking a hit of this creamy-yet-tangy condiment. Then we’ll take a look at the main ingredients found in most salads creams, with a section dedicated to the most popular of them all, Heinz Salad Cream. After that, we’ll even let you know how to make your own vegan salad cream!

When it comes to the world of vegan condiments, salad cream is not as well-represented and certainly not generally as well-loved as some. But the few vegan options that do exist are of good quality and are also good value, which is at least something, as often prices are hiked for “free from” products for no apparent reason. Anyway, here are the best vegan-friendly salad cream options around in the UK at the time of writing.

There are few other options out there, but some are not readily available (like GranoVita Vegan Salad). We are hopeful there will be more added, but for most people, one of the supermarket own-brand vegan-friendly salad creams should do the trick.

What Stops Salad Cream Being Vegan?

As mentioned in the introduction, it is the inclusion of eggs that render most standard salad cream products unsuitable for vegans. Often this is in the form of dried egg yolk, which acts as an emulsifier to allow the oil in the sauce to thicken and mix effectively, and not separate, from the other ingredients.

Traditionally, salad cream would also include cream (usually double cream), which had been made from dairy milk. It is very rare for salad cream to include actual cream these days so in most cases it is only the inclusion of eggs that causes the product to be unsuitable for vegans to consume.

According to consumer and market data company Statista, “In 2018, an estimated 7.6 million people used Heinz Salad Cream in the UK.” That might be so, but that number won’t include vegans (or at least we hope it didn’t), because Heinz Salad Cream includes (chicken’s) egg yolks!

So, there we have it… people who have become vegan who used to love a bit of Heinz Salad Cream are simply going to have to consign that chapter of their culinary past to the history books (we’re not actually suggesting anyone writes a book about how much they miss Heinz Salad Cream, but you get the gist).

Mayonnaise also has a thicker consistency than salad cream. The inclusion of mustard in salad cream also give it the hint of a kick which is lacking in the rather more benign mayonnaise. So, if you want punch and tang, salad cream may be the way to go, whilst for the creamiest option, mayo is usually better.

Most shop-bought vegan salad creams have various additives and preservatives, such as maltodextrin and xanthan gum, not to mention sugar in one form or another. For people who would prefer to regulate exactly what ingredients are going into their sauce, and those who prefer only natural organic ingredients, there is the option to make your own vegan salad cream.

Bear in mind that homemade salad cream, without the inclusion of the usual additives, is unlikely to taste exactly like one you might buy in your local supermarket… but you might well prefer your own fresh version.

And, of course, you can experiment with the ingredients to change the flavour and consistency as you see fit. It should keep for a good few days if in an air-tight container in the fridge. 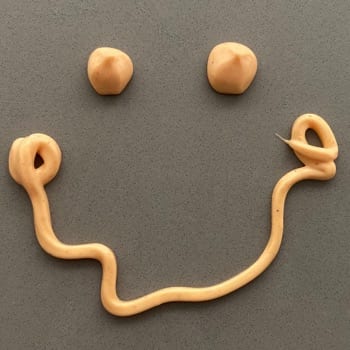 Whatever food you want to enhance by adding salad cream (which includes those people who fancy a nostalgia trip to a time when salad cream was used as a convenient salad dressing), the good news for vegans is that there are some very nice and good value vegan-friendly salad cream options available.

For people who have recently transitioned to a vegan lifestyle and for whom Heinz Salad Cream was something of a favourite, alas that simply cannot be on the vegan menu as it – like most salad creams out there – contains eggs.

Of course, we wouldn’t be surprised if Heinz brought out a vegan-friendly salad cream in due course, just like Hellmann’s have with their rather fantastic Vegan Mayo.