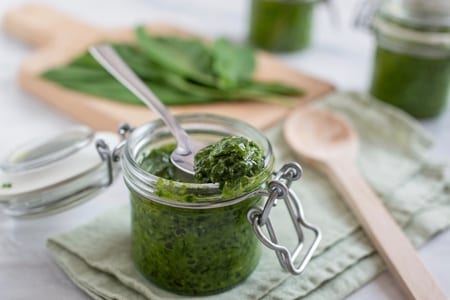 Pesto, traditionally known as pesto alla Genovese, is a delicious basil-based sauce that comes from Genoa in north west Italy, hence the “Genovese”. The “pesto” bit comes from the Italian verb pestare that means “to pound”, the sauce being made by pounding the ingredients together in a pestle (which originates from the same Latin root) and mortar.

Those ingredients, sadly for vegans, include cheese, usually Parmesan in the UK, but often Sardinian Pecorino in Italy. Either way, these cheeses are made from animal milk (cows in the case of Parmesan, sheep for Pecorino) and for extra non-vegan points, rennet (enzymes taken from animals) is used to help curdle the milk.

So, on the face of it, there is a simple answer when faced with the question, is pesto vegan? No, it’s not vegan. However, thankfully for vegans (or those seeking to follow a vegan diet) who love this punchy, salty, green delight, there are a number of ways around the issue.

Is All Pesto Made the Same Way? 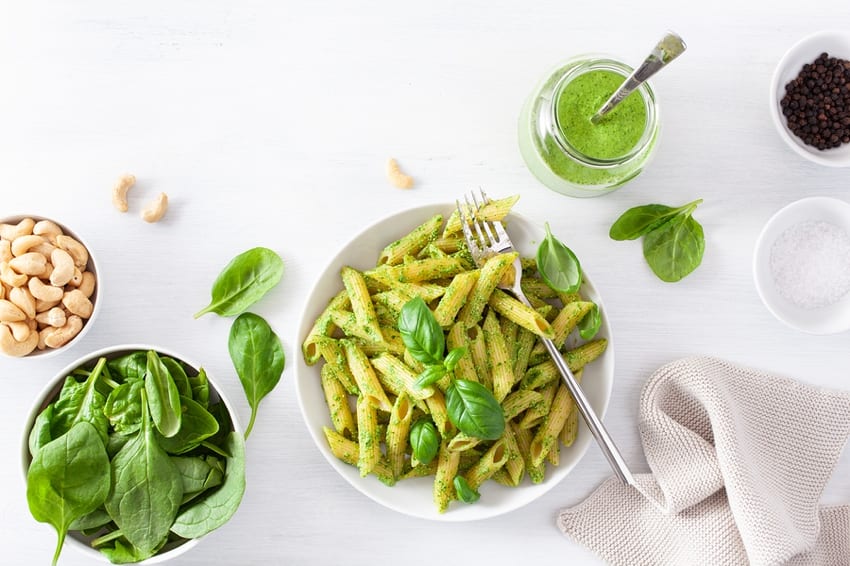 First of all, it’s worth noting that increasingly the word “pesto”, which used to refer almost exclusively to pesto alla Genovese, is now used to refer to a whole range of different sauces. Such versions of so-called pesto are usually just riffs on the famed original that involve pounded (or often blitzed) ingredients.

These sauces often don’t include basil, although a green herb is usually substituted, they often use a nut other than pine – or don’t include nuts at all – and may well not contain cheese. In other words, if you see pesto on a menu, or are served it at someone’s house, it is worth checking whether or not they are actually using one that contains cheese.

Whilst a standard recipe for pesto might include cheese, it’s not at all necessary. Here we make a couple of suggestions for cheese substitutes that more or less perform the same function as their dairy counterpart.

The simplest way to make a vegan pesto – alla Genovese or otherwise – is simply to miss out the cheese entirely. If you do this, for yourself or for a vegan guest, you will probably need to add a little more salt than normal, with part of the cheese’s role being to act as seasoning, and perhaps a little more oil. Alternatively, adding a little yeast is a good way to reproduce some of the flavour of the cheese.

Another option is to use vegan cheese. Vegan parmesan, either shop bought or homemade using cashew nuts, will add a similar texture and tang. Alternatively, more or less any other hard, salty vegan cheese will work well.

Where to Buy Vegan Pesto

If making your own pesto sounds like too much trouble – we promise, it isn’t and the results are delicious – then readymade vegan pesto is now widely available. These products can usually be found in the “free from” ranges and, as well as being vegan, these are usually gluten free and also suitable for those avoiding dairy for any other reason.