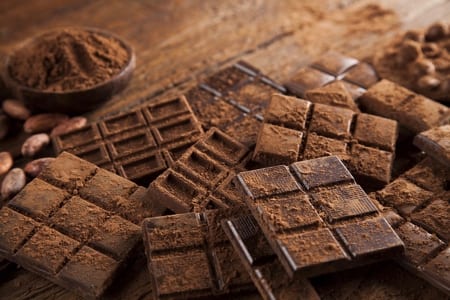 Chocolate no doubt ranks near the top on lists of foods most people really wouldn’t want to give up. It is also a food that can cause a lot of confusion to newcomers to veganism or those catering for someone on a plant-based diet.

If you want to know whether chocolate is vegan or not, you are in the right place, as we have the full lowdown on the issue.

Before we can decide if any item or foodstuff is vegan it is obviously rather helpful to understand what that thing actually is! The dictionary describes chocolate thus:

A food in the form of a paste or solid block made from roasted and ground cacao seeds, typically sweetened and eaten as confectionery.

That isn’t overly helpful to us, although does give us some fairly obvious starting points. Most sweeteners tend to be vegan, as do things that have seeds. Cacao, unsurprisingly, is indeed a plant, the fact it belongs to the taxonomical kingdom plantae being key here.

The base ingredient for chocolate comes from the Theobroma cacao plant, or cocoa tree. Native to tropical areas within the Americas it is grown there, as well as West Africa and parts of Asia. Chocolate lovers, vegan or otherwise, will fully appreciate the Greek roots of the plant’s genus (Theobroma), the tree taking its name from its place as “food of the gods”.

God’s dietary requirements aside, it is (so far) vegan: seeds from a plant, combined with a sweetener. However, chocolate comes in many different guises and if Sherlock Holmes was part of our vegan investigative crew, we suspect “milk chocolate” would raise an eyebrow, or at least a knowing glance towards Watson.

There are potentially a number of things to look out for when trying to buy vegan chocolate. Whether you intend to eat it on its own, add it to a cake or make some other chocolate-based sweet treat, if you want to avoid animal products, the following are the ingredients to look out for.

Milk is the most obvious addition to chocolate that would make the end product non-vegan. There are widely accepted to be three “types” of chocolate: dark (or plain), white and milk. Both white and milk chocolate contain milk and this milk is taken from cows in all mass-produced chocolate. There are some small, independent confectioners producing chocolate using goat’s milk and sheep’s milk.

In theory, you could create a chocolate using milk from any animal but, from a vegan point of view, the specific animal is irrelevant. Any such chocolate is not vegan friendly and the presence of milk is the simplest signifier that a given chocolate is not suitable for vegans. In short, this means that all milk and white chocolate cannot be vegan, unless it is specifically labelled as such (in which case one of the many plant-based milk substitutes would have been used).

Unfortunately, it isn’t quite as simple as only eating dark chocolate or looking for the word “milk” on the list of ingredients. Committing to a vegan diet is never an easy process and with many modern foods’ ingredients sounding more like scientific experiments than old-fashioned recipes, there are lots of milk derivatives to look out for.

The following, along with cream and cream-related ingredients, are used in a range of ways in many chocolates. These ingredients are often used as cheap “fillers”, instead of more expensive cacao-based alternatives, or may be used to alter the texture, flavour or stability of the finished chocolate.

Milk is by far the most likely animal-based product to find its way into your chocolate but it is far from the only one. Lecithin is a common ingredient in many mass produced chocolates and is a fat that is used as a cheap filler. It also helps chocolate flow and melt better, reducing viscosity and helping to stop sugar crystallising. Wow, what a thing this lecithin is, you might be thinking!

Whilst some lecithin is indeed vegan, coming from soy, rapeseed oil, sunflower oil and a few other non-animal sources, much of the lecithin used commercially comes from eggs. Indeed, lecithin takes its name from the ancient Greek for egg yolk (lekythos) as this was where it was first isolated from. As well as being produced from eggs, lecithin may also be taken from animal tissue. Either way, its presence on the label means the chocolatey good stuff within isn’t vegan.

Many of the UK’s most popular chocolate bars are not solid chocolate but include other sweet or savoury items, such as fruit, nuts, caramel or biscuits. Fruit and nuts represent no problem and are usually a good way to make your chocolate treat at least a little healthier. However, both biscuits and caramel (and other similar confections, such as fudge, for example), are likely to contain butter.

Depending on the quality of your chocolate, the biscuit or caramel may actually be made with a synthetic butter substitute that may or may not be vegan friendly. Either way, if you’re eating a “chocolate” bar that isn’t simply a solid block of the food of the gods, it would be prudent to pay a little extra attention to the ingredients.

Not All Butter is Bad! Whilst we’re on the subject of butter, one ingredient that vegans don’t need to be concerned about that is to be found in many chocolates is cocoa butter. Cocoa butter is 100% plant derived, coming from the cocoa bean itself. In actual fact, cocoa butter is often one ingredient that you do want to see listed because the more of it packed into your favourite bar, the less room there is for non-vegan fillers.

Cocoa butter is considerably more expensive than palm oil and other potential substitutes and is a key ingredient in all types of chocolate, including dark chocolate. It melts just below human body temperature, helping to make chocolate solid at room temperature but create a delicious mouthfeel once eaten.

It consists primarily of oleic acid and stearic acid, something we mention due to occasional confusion caused by the latter. Levels of stearic acid tend to be high in animal fats, however, the stearic acid in chocolate is naturally occurring within the cocoa butter. We have seen some vegan sites warn chocolate lovers off stearic acid but this would only be the case if it had been derived from an animal. As far as we know this is not the case with any available chocolates on the UK market.

There is no getting away from the fact that bacon is a popular food in our culture, with it even making an appearance in some beers! Sadly, for those who are partial to a square or three of chocolate, it isn’t just beer that bacon has found its way into.

Yes, that’s right, you can buy chocolate with bacon in it! As said, anytime you buy chocolate that goes beyond a plain bar of the good stuff, it is wise to check the ingredients or look for vegan certification. When it comes to “out there” additions like bacon, it is safe to say these will be very clearly labelled, so at least that’s something!

Many chocolate bars and products contain sugar in one form or another. As we discuss in our is sugar vegan? article, sugar isn’t without its issue when it comes to veganism. In short, some refined sugar may be bleached using charred animal bones. Lovely, right?

Many UK sugars are now vegan but knowing whether or not the sugar used in your chocolate has been in contact with animal products is very tricky. Ultimately, the only way to be 100% certain is to contact the manufacturer to check or to look for explicit vegan labelling. 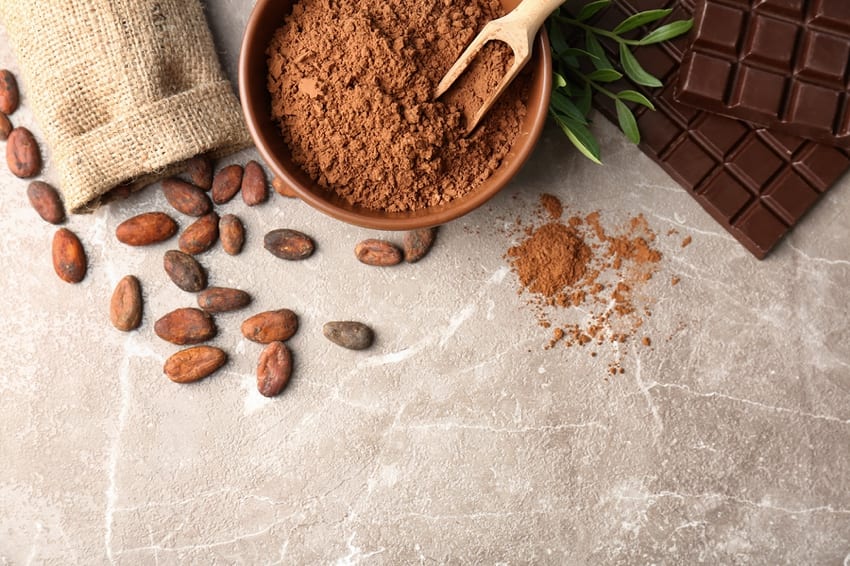 Enough with the bad news; thankfully, for all you vegan chocolate lovers there are lots of good options when it comes to vegan chocolate. Broadly speaking, these can be divided into two categories: “pure” dark chocolate and specialist vegan chocolate that uses milk substitutes.

In theory, there is no need for dark chocolate to use animal products. Good quality dark chocolate can contain 100% cocoa solids and such a product would be vegan friendly. In reality, 100% cocoa is far too dark and bitter for most people but in simple terms, higher cocoa is more likely to be vegan. It often uses far less sugar than dark and milk chocolate too, so that is less of a worry, although vegans who are concerned about the sugar should still check.

Many dark chocolates are inadvertently or naturally vegan, meaning their standard production process and list of ingredients makes them vegan. Those that use lecithin as an emulsifier tend to use soya and dark chocolate is definitely a great place to start looking for vegan chocolate. Major brands such as Lindt, Green and Black’s and Divine, as well as many supermarket own brand dark chocolate offerings are vegan. So, if you like your chocolate dark, packed with healthy antioxidant flavonoids and totally 100% animal free, you really shouldn’t have any problems.

Veganism is becoming more and more popular and mainstream and this is great news for anyone looking for vegan substitutes for just about any food or product. It is certainly the case when it comes to chocolate and now vegans are certainly not restricted solely to dark chocolate.

Many widely available (albeit slightly higher end) brands now offer vegan chocolate that is marketed and clearly marked as such. The likes of Montezuma, Hotel Chocolat and others have a range of vegan options.

These can be made in a number of ways. For example, Montezuma’s brilliantly named “Like No Udder Milk Chocolate” (available in “milk” and orange flavours) uses rice-derived products instead of milk to create the lighter, creamier flavour. Moo Free is another brand that uses rice milk whilst others use coconut or other nuts to supplement the chocolate. In short, vegans need not forgo chocolate, they just need to do a little research before tucking in!