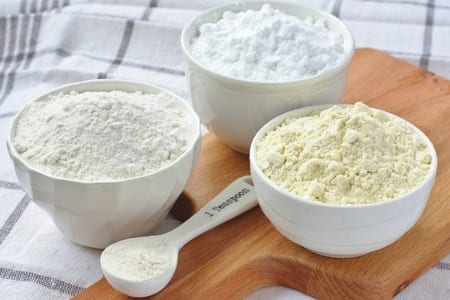 Xanthan gum is a polysaccharide – essentially a long chain carbohydrate – that is commonly used as a food additive (known as E415) as a stabiliser, thickening agent or emulsifier. Found in foods as diverse as salad dressing, ice cream, soups and fruit juices, it can sneak into many items on the average person’s weekly grocery shop. But, is xanthan gum vegan? Well, yes… usually.

For fear of coming across as something of a stuck record in our articles in the Is It Vegan? area of our site, xanthan gum is just the latest ingredient for which it is impossible to guarantee it is always vegan. But in the vast majority of cases, the xanthan gum that appears in bagels or even your toothpaste is highly likely to be vegan friendly.

In this article, we will explain what xanthan gum is and we’ll also give a little history about the discovery of xanthan gum, just in case you are interested. Or very, very bored. We will then explore the possible reasons it could be unsuitable for vegans and how to check if you want to be on the safe side.

What Is Xanthan Gum & How Is It Made?

Have you got your goggles and lab coat on? Then we shall begin. Xanthan gum is a polymeric carbohydrate, meaning that it is a macromolecule that is made up of repeating units of carbohydrate subunits (that contain carbon, hydrogen and oxygen atoms). The gum is produced through the fermentation of the simple sugars, glucose and sucrose. The name xanthan derives from the Xanthomonas campestris bacteria used in the process. The same bacteria causes the formation of “black rot” on broccoli and other similar vegetables but don’t let that put you off!

The process of producing the gum involves adding the bacteria to a solution of the sugar(s), with the addition of some nitrogen, some trace elements and some dipotassium phosphate (an inorganic compound produced in the lab). After a few days, the solid polymer is extracted from the solution and it is dried and milled into a powder, ready for use as a food additive or in various industrial processes (for example in the oil industry for thickening drilling mud).

Discovered by US chemist, Allene Rosalind Jeanes, along with her team at the US department of Agriculture, xanthan gum gained approval for use in foods in 1968, after which it was designated as a food additive with E number E415.

What Stops Some Xanthan Gum Being Vegan?

As mentioned above, xanthan gum is produced by the fermentation of carbohydrates in the form of sugars. These sugars can come from a variety of sources, and this is where the possibility of animal-derived products might come into the mix. It is not that xanthan gum itself contains any animal ingredients, but it is possible that the sugars used in its production have been sourced from animal products.

One such product that can be used to obtain the carbohydrates necessary for xanthan gum production is whey, a by-product of cheese production. This is by no means the most common source of carbohydrates for the process, but it is abundant and available at a low cost (as it is essentially a waste product), which is indeed why it pops up in plenty of other foods, thus making them non-vegan.

There are plenty of plant-based carbohydrate options for producers of xanthan gum, of course. These include sugar cane, corn starch, sugar beet, soy, or any number of other plants.

Another potential cause of xanthan gum not being vegan is that enzymes used to purify the gum may have come from animal sources. In the patent covering the process of purifying xanthan gum using an alkaline protease and lysozyme, it is stated that “lysozymes of chickens, ducks, quails, turkeys, and geese” (among other animals) may be used, though it also states plant lysozymes could be used instead.

How to Check if Xanthan Gum Is Vegan? 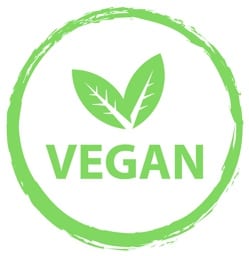 In some cases it is quite likely that a product hasn’t been specifically designated as vegan friendly on the package, but that it is indeed fine. If you can see no other ingredients that might stop something being vegan except for xanthan gum, chances are it will be suitable for plant-based eaters and it is just a case that the producer of the product has not (for whatever reason) made a point of the vegan credentials.

There are lots of products that are not designated as vegan because they have been made in factories that might also deal with dairy or other animal products. A lot of vegans will view this possibility of cross contact or cross contamination as something they are willing to risk (though people with dairy or other allergies should take more notice).

If this is not the case and there is nothing obvious other than the xanthan gum that could be stopping a product being classified as vegan, the best course of action would be to contact the manufacturer and ascertain what ingredients were used to culture and/or purify it. As described above, if the by-products from cheese production (whey) were used in the production or chicken lysozymes in the purification, this would cause the resultant xanthan gum to be non-vegan. If only plant-derived sugars and lysozymes were used, it will be fine.

Obviously, it’s not always practical to contact a manufacturer of a given product when you’re in the middle of your weekly shop or eating at a friend’s house. But in most cases there should be a vegan-friendly alternative available for whatever it is you’re hoping to purchase.

Based on the available evidence it appears that xanthan gum is safe to consume. A 2017 study published by the European Food Safety Authority found that “no adverse effects were reported at the highest doses tested” in relation to chronic or carcinogenicity studies, and they went on to say “there is no concern with respect to the genotoxicity”.

If in Doubt, Check with the Manufacturer

The bottom line here is that xanthan gum is a safe food additive that has a variety of uses in a wide range of foods and it is usually fine for vegans to consume. To play it safe, it is advisable to stick to products containing xanthan gum that are specifically marked as vegan (for example, to pluck a product out of the vegan-friendly ether, Tesco’s own vegan friendly and very tasty Mango and Chilli Salad Dressing!).

Alternatively, you could contact the manufacturer, but trying to get a definitive answer about the specific production and purification methods used could be difficult, and would certainly take time and effort. But with more and more manufacturers embracing vegan-friendly processes and labelling, we anticipate a growing proportion of xanthan gum will be fine for vegans to consume.