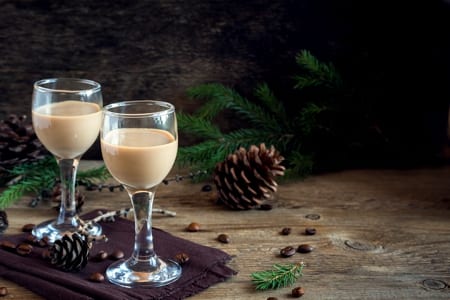 Whether you associate Baileys with Christmas, cold winter nights, after-dinner drinks or you just love it irrespective of the occasion, the important issue for vegans is whether or not this Irish cream liqueur is vegan friendly.

There is good news and bad news, as is so often the case when it comes to food and drink in our Is It Vegan? section. The traditional Baileys is not vegan, but they do, however, have a vegan friendly version.

Original Baileys Is Not Vegan

We’ll start with the bad news: Baileys is not suitable for vegans. We’ve previously considered this in our article looking at vegan spirits (we’ve got features on wine and beer too, for those who like the occasional drink!).

For most people with even a basic understanding of veganism the reason why Baileys is a no-no should be fairly obvious. The clue is very much in the name, with Baileys Original Irish Cream being made with, you’ve guessed it, cream. The cream in question comes from cow’s milk and as we explain elsewhere, milk isn’t vegan and the dairy industry actually causes a huge amount of suffering to the animals involved.

Now for the good news: Baileys listened to the concerns of customers and created a vegan version of Baileys. It’s called Baileys Almande, which we assume is supposed to sound sophisticated and sexy… just like vegans! It also, like the Original Irish Cream version, hints at its ingredients, with this vegan Baileys being made with almonds.

Baileys Almande has been around for a while now and it’s actually pretty good. It was first launched in 2017 and has generally been well-received. If you’ve still got your vegan L-plates on and are a former Baileys fan you’ll notice the difference, of course. It isn’t as rich or as creamy, with a lower viscosity and there is a hint of the almond flavour. However, drink it for a few weeks (responsibly of course!) and we’re pretty sure you’ll get used to it and if you were ever to switch back you would probably find the original cloying and heavy.

It also works well in cocktails and when mixed with other ingredients even a seasoned Baileys-lover is going to find very little difference. Equally, if your guests are enjoying a Baileys Almande at the end of the night, after a meal and lots of other drinks, they are unlikely to be able to discern much difference.

As said, there is a mild almond taste that you don’t get with the original and that’s because this vegan Baileys uses both almond oil and almond essence. Both of these are natural ingredients, derived from almonds, as opposed to synthetic flavourings.

Another thing to note is that it isn’t quite as strong as the dairy version in terms of alcohol content. Baileys Almande is 13%, whilst the traditional cream version is 17%. On the plus side, that means you can drink more which is great as it certainly tastes nice but, on the downside, if you’re looking to add a bit of a kick to cocktails or desserts, Baileys Almande doesn’t quite pack the same power.

Because the almond base is a little thinner than the creamy original, we think it probably wouldn’t stand up quite as well to alcohol so the makers have decided to opt for a lower ABV and a better-balanced liqueur. If you want to add your own whiskey to up the ante there’s nothing stopping you though.

In conclusion, Baileys Almande is 100% dairy free and suitable for vegans. It contains sugar but this is cane sugar and, as Baileys market the drink as suitable for vegans, we feel it is safe to assume this hasn’t been processed using bone char.

What About Other Baileys Products?

As well as their original drink and the vegan-friendly Baileys Almande, Baileys also produce a range of other beverages. Before we look at those, let us just point out something that we think would be obvious. Anything made with the non-vegan Baileys Original Irish Cream is not going to be magically suitable for vegans. As such, any Baileys-based desserts, such as cheesecake or mousse, should be avoided, unless you are sure they are vegan (either having been made with Almande or some other vegan Baileys substitute).

When it comes to the other drinks made under the Baileys brand the picture is, unfortunately, equally non-vegan. Baileys bring out different special and limited edition drinks from time to time but, as far as we know, all of these have been non-vegan, with most being based on the traditional version that includes cream.

At the time of writing, Baileys offers the following bottled liqueurs to their UK customers:

Making Your Own Vegan “Baileys”

Whilst Baileys Almande ticks all the boxes for us, this isn’t the only option for Baileys fans who don’t want to consume dairy. Vegans get used to having to create their own vegan alternatives for many products, so it should be no surprise that you can knock up your own custom-made vegan Baileys-inspired drink without too much trouble. Essentially you just need to combine some Irish whiskey with a few other ingredients and you’ll end up with something vaguely akin to Baileys, but 100% vegan and made to suit your own tastes.

First, let’s start with the whiskey itself. As far as we know, every whiskey (that’s the Irish spelling, in case you thought we’d not learned to spell, and seeing as we’re recreating an Irish drink we’ll stick with it) is vegan. For this creation, there is no point using a top notch dram – just something at the cheaper end of the middle will be perfect. Tullamore or Bushmill’s would fit the bill.

Then you want some form of non-dairy milk. What you use is up to you but we would say that almond, coconut and cashew work best – and you can even use a combination. If you reduce this down with a little demerara sugar, you’ll end up with a thicker, creamier, sweeter milk that will give your vegan “Baileys” the right colour and mouthfeel. Note that demerara sugar is always vegan too, and lends the finished beverage a nice depth of flavour.

You can then add further flavourings, with coffee, cocoa and vanilla being the obvious options. As with all the ingredients here, we recommend a little experimentation to find out what works best for you. 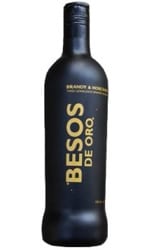 Imitation, so they say, is the sincerest form of flattery and so it is no real surprise that many drinks makers have sought to copy Baileys. Given the increasing awareness of veganism it should equally come as no real shock that various companies have also released their own version of vegan Baileys.

Keep your eyes peeled for drinks, such as Besos De Oro Vegan Cream Liqueur, based around the Valencian drink horchata, usually made with tiger nuts. Almondaire is another option, though this is currently only available in the US. Hopefully that will change though, as it is delicious. We also wouldn’t be surprised to see supermarkets releasing their own vegan Baileys-style drinks in the near future. In short, vegan Baileys fans, you have plenty of options – just steer clear of the original!