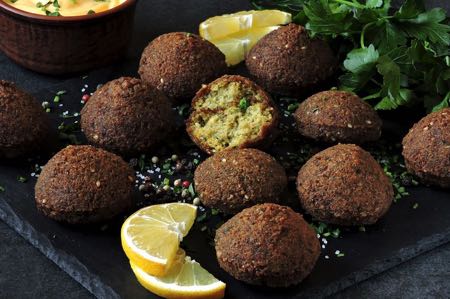 Is It Vegan? section of our site but, just like avocados, jackfruit and a whole host of other items, falafel falls into the category of “clichéd vegan food”. Of course, if they are a cliché and are stereotypically associated with those on a plant-based diet, surely falafel is vegan, right?

Well, good news if you are a fan of these Middle Eastern goodies: yes, falafel certainly is vegan and, even better news, there isn’t too much you need to look out for in the way of potential non-vegan ingredients.

Let’s take a look at the ingredients of falafel, explain how it is made, and examine what – if anything – vegans should be aware of. We’ll also present any other information relevant to these chickpea-based delights in relation to the world of plant-based eating.

As with many recipes, there are countless variations and local differences when it comes to making falafel. However, if we consider the core ingredients that just about everyone agrees with there are surprisingly few. In fact, it could almost be argued that there are none (beyond chickpeas).

If you say the word “falafel” to someone with a decent knowledge of food, they are perhaps most likely to think of chickpeas as an ingredient. Chickpeas are just about the only constant when it comes to these nutritious fried balls. Unless, that is, the recipe uses broad beans (which are also known as fava beans, or, if you want to get horticultural, Vicia faba) instead. In fact, there is a very strong argument to suggest that falafel was originally made from broad beans, although in the UK you are now more likely to encounter the chickpea version. 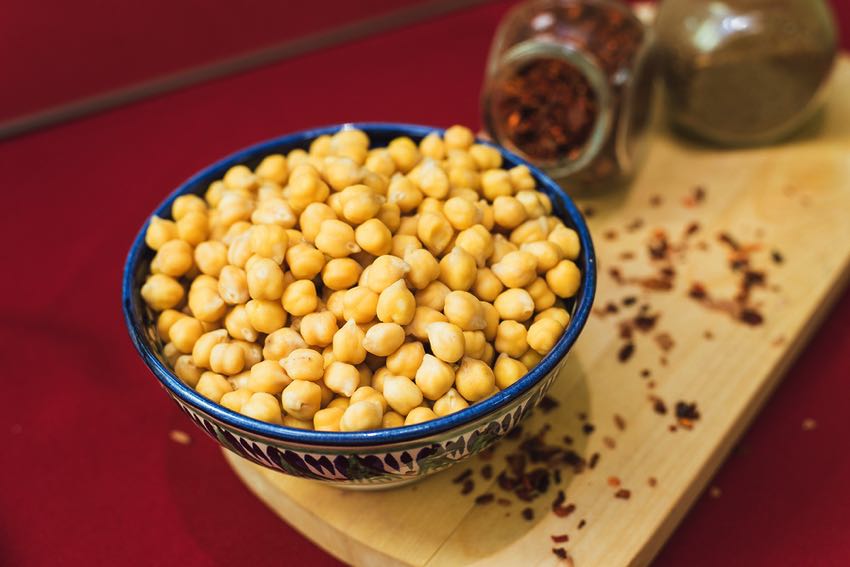 We’ll return to that debate but for now let’s return to the ingredients. All falafel uses mashed (usually food processor-blitzed) chickpeas, or broad beans, for their bulk. Where you go from there is up to you, but the following are the most common additions:

You don’t need to be a culinary expert to note that all of the ingredients detailed above have strong vegan credentials.

All of the major brand and supermarket falafel and falafel mixes we checked were vegan friendly. The ingredients of the widely available Goodlife Falafel are listed below and are fairly indicative of what we see with other products, flavourings aside.

However, that is not to say that all pre-made falafel or ingredient-packs are vegan so either check the label or buy from a trusted health food shop of vegan retailer such as TheVeganKind Supermarket or GreenBay Supermarket. Given the ingredients are undoubtedly vegan, what could possibly go wrong?

Falafel is essentially a flavoured, shaped ball of mashed chickpeas or broad beans that are fried or baked. They are wonderful as a snack, as part of wider mezze or used as a filling for a pita bread, sandwich, wrap or even a burger.

They originate in the Middle East, of which more later, but are now enjoyed all over the world and are a tasty, delicious staple of many vegetarians and vegans. Given they are made from plants and cooked in plant-based cooking oils (we have certainly never heard of them being fried in animal fats), is there anything those on a vegan diet should be wary of?

In general we would say no, but for a vegan who takes their principles and diet super-seriously, there are perhaps a couple of caveats. Note that neither of these apply if you are making your own falafel from scratch.

Firstly, most vegans would want to know that their food has not been cooked in the same oil, or using the same equipment, that has been used to prepare non-vegan items. Burger King’s non-vegan “Rebel Whopper” fell down in this way. If you are eating falafel in a restaurant, at a friend’s house or from a takeaway or food truck, it might be best to check that the oil your food is fried in is only used for vegan items.

You would expect that a friend would be aware you are vegan and know of the need to use separate oil/equipment, but in a space-restricted van or pop-up it isn’t inconceivable that non-vegan food could be cooked using the same fryer. That said, given falafel is frequently marketed and expressly sold as being vegan, you would certainly hope this wouldn’t be an issue.

The second thing to note concerns additives and this is most likely to be a concern if you are buying a pre-made falafel or falafel mix. Obviously, if you are making your own from scratch you won’t need to worry about this, whilst you would certainly expect a restaurant or other commercial vendor to use base ingredients rather than a shop-bought product.

Once again, given the fact that falafel is generally considered to be vegan and are widely eaten by those on a plant-based diet, it is unlikely that any pre-made falafel or falafel “powder” would include animal-derived additives. However, it is certainly possible, such is the prevalence of preservatives, flavourings and other extracts.

Falafel Is Vegan, But Are They Healthy? 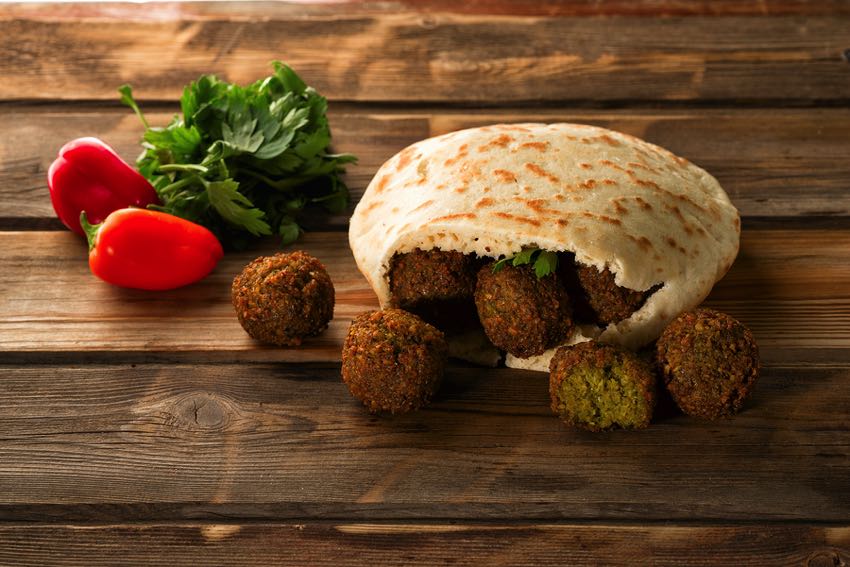 Whether you have chosen vegan for ethical reasons, veganism for environmental reasons or because of the health benefits of being vegan, being aware of the nutritional value of what you eat is important if you want to live a healthy vegan life. So, is falafel a good addition to a vegan diet: should it be a rare treat or is it best avoided altogether?

There are few vegan foods that we would truly put in the latter category because most things can be enjoyed in moderation (vegan chocolate, we’re looking at you!). However, can you eat falafel with abandon or is it more of a once-every-few-weeks-sort-of-food and, perhaps just as importantly, what nutrients do they offer?

By and large, we think most people would agree that falafel is pretty healthy. The vast majority of its mass is made up of chickpeas, with much of the rest made up of vegetables and phytochemical-rich herbs and spices. So far, so good. The only world of caution concerns the way falafel is traditionally cooked, with deep frying adding a significant amount of fat into the mix, even if the oil used is one packed with “good” fats, such as rapeseed or olive oil.

The precise nutrition of falafel will vary depending on the recipe and how they are cooked but as a general guide the following serves well. This values below are based on the 2019 USDA data for 100g (a fairly standard serving) of homemade falafel, with the daily requirement based on average recommended UK values.

As you can see, falafel is an excellent source of fibre and phosphorus, as well as being a great way for vegans to get protein and also iron. As said, they are not a low-fat food, but they contain very little saturated fat, assuming they are cooked in a vegetable oil and also contain a wide range of other micronutrients in reasonable levels, including the following:

Of course, falafel is rarely eaten alone and what it is combined with will have a big impact on the overall nutritional value of the meal. Much as they are delicious with chickpea-based vegan hummus, we would perhaps suggest avoiding this classic combo.

Such a meal would make a great lunch with some salad but there are probably more nutritious options. That’s because both falafel and hummus are reasonably high in fat and also because they both obtain most of their nutritional value from chickpeas. That means you are essentially doubling up on the same micronutrients.

From a nutrition point of view, perhaps the only other thing to be aware of is that depending on your recipe, falafel may be reasonably high in salt. Obviously, you can easily control this if making your own. However, if you are using a premade mix or prepared item, it is probably best to check the salt/sodium content and eat with a low-salt accompaniment if the numbers don’t look too great!

Ultimately though, falafel is very flexible and is brilliant with pitas and a chilli sauce, or perhaps with quinoa, barley or another highly nutritious grain. Served with roast vegetables and a salad, they can create a brilliant meal and, all in all, they are definitely a great addition to a healthy vegan diet.

Who Made the First Falafel?

This question might not quite be up there with the whole chicken and the egg debate but it is certainly one that interests food historians. As with many foods and recipes that have been around for hundreds or even thousands of years, we cannot possibly know for sure where or when the first crispy-on-the-outside-fluffy-in-the-middle ball of falafelly goodness was first fried into existence.

According to Philip Sinsheimer, the “origins of the falafel are obscure, even controversial”. In the book by Carlo Petrini, who founded the slow food movement, and Ben Watson, Slow Food: Collected Writings on Taste, Tradition and the Honest Pleasures of Food, there is a lengthy discussion about this subject and why there is such debate relating to the issue.

The falafel is, many would argue, the national dish of Israel, and yet confusingly, there the word typically means a flat-bread filled with salad, garnishes and the chickpea-based “fritters” that to many others in the Middle East are the falafels themselves.

Whilst Israelis undoubtedly love falafel, many argue that the fritters, rather than the “sandwich”, originated in Lebanon. This being the Middle East, the argument doesn’t stop there. The people of the region love a heated debate but they love food even more and Egypt, Yemen and Palestine also lay claim to our favourite chickpea (or, of course broad bean!) snack.

Most food historians seem to settle on Egypt as being the home of the falafel and although some date its creation as far back as 4,000 years, its formulation seems more likely to have taken place around 1,000 years ago.

With the Middle East such a hub of trading and having played a key role in the histories of many nations around the world it is little surprise that the humble falafel has spread far and wide. Delicious, nutritious and easy to make (we don’t work for the falafel marketing board but we’re open to offers), they have been embraced wherever they have landed.

That said, it has only really been towards the end of the 20th century that falafel has become mainstream in countries, such as the UK, the US and many others around Europe. They spread around the Levant much earlier but it took mass immigration and globalisation to really push the falafel into everyday cooking further afield.

All have huge benefits but globalisation, trade and immigration certainly causes their fair share of problems too. For us though, when it comes to the falafel, the balance sheet is almost all positive. Be they made from chickpeas or broad beans and be they first invented in Egypt, Palestine or anywhere else, falafel is vegan, healthy and totally delicious.