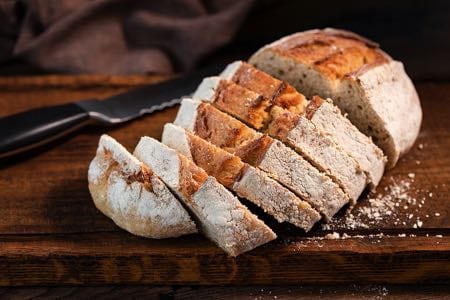 If you believe the media clichés, during the COVID lockdown those who were not knee deep in banana bread were at the very least up to their ankles in sourdough. Whether you embraced the slower pace of life of lockdown and used extra free time to make your own sourdough, or bemoaned the closure of your local bakery whilst simultaneously Zooming the boss, teaching your kids French and trying to do Joe Wicks, there is a key question for vegans: is sourdough is suitable for those on a plant-based diet?

Well, here at VeganFriendly we absolutely love sourdough and good news: it is indeed vegan! As ever, there is the odd thing to look out for but, in general, “proper” plain sourdough, made in anything resembling a vaguely traditional fashion, using decent ingredients will always be vegan. It is a very simple food and should be made with just a few basic ingredients, all of which are vegan. 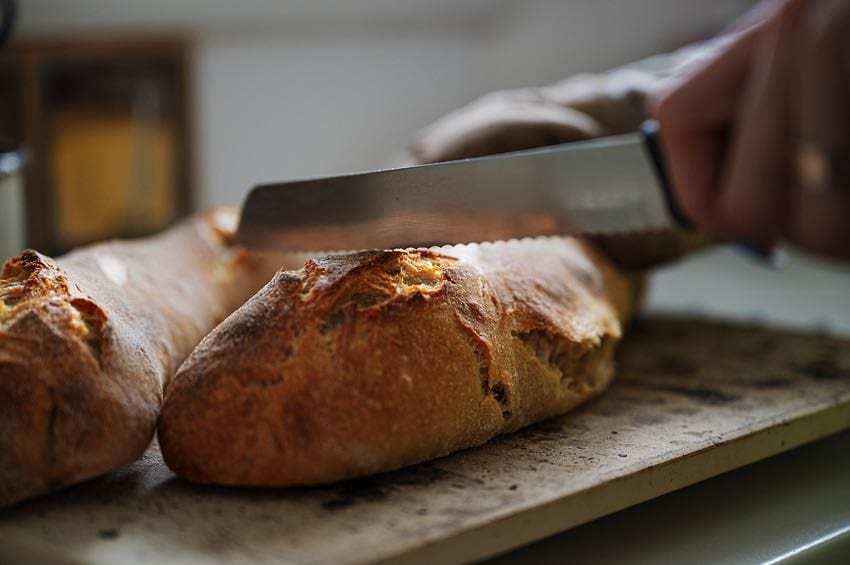 There are some red herrings when it comes to sourdough that people may be (unnecessarily) concerned about.

Although this popular and very tasty bread does not use controlled yeast, it does contain such microbes. However, yeast is most certainly vegan, so we don’t need to worry about that.

Another thing that vegans can dismiss is the issue of lactic acid. The bacteria that give sourdough its distinctive sour acidity do include those of lactic acid but, once again, these are entirely vegan as this occurs naturally in the flour and is nothing to do with dairy milk in this case.

The last issue that vegans may be concerned about but almost certainly should not be is flour. In both our dedicated articles on flour and bread generally, we explain that the use of the flour improver L-cysteine is relatively rare these days.

Moreover, it can now be produced synthetically and whilst getting a 100% accurate answer on its use is very tricky, when it comes to sourdough, we would be very surprised if non-vegan flour (containing L-cysteine) was being used.

That is primarily because sourdough is more of an artisanal product, so is unlikely to have used flour that has had L-cysteine added, the natural yeasts and bacteria of sourdough making flour improvers redundant. One of the key functions of L-cysteine is to reduce fermentation and mixing time, whilst sourdough is typically a bread that embraces a slower methodology.

It is rarely a mass-produced product where speed and low costs are the chief driving factors and, from a vegan perspective, that means that L-cysteine completes our list of things not to worry about.

The things with which vegans do need to be concerned are non-essential additions to a sourdough recipe. Of course, if you make sourdough yourself, this will not be an issue. You will know exactly what has gone into your loaf and can ensure it is entirely plant-based by sticking to the three traditional ingredients: flour, water and salt.

However, there are plenty of people who aren’t master bakers and who don’t have the time to bake their own sourdough, so what should you look out for in a shop-bought sourdough or what questions should you ask in a café, restaurant or even at a friend’s house?

There are a plethora of sourdough recipes on the internet, with the Google search “sourdough recipe” serving up almost 800m results! We haven’t checked all 779,000,000, but just a quick glance shows that there are some fairly typical ingredients that might trouble a vegan.

The first potential issue concerns some form of sweetener. If a sourdough includes honey, and some do (for example, this one from the BBC Good Food Guide), this is not suitable for those on a plant-based diet. Honey is not vegan friendly and sugar, which some recipes use instead, can sometimes be problematic due to the use of bone char, though this is increasingly rare.

There may also be issues with what the starter has been “fed” on. We’ll look at sourdough starters in more detail shortly. As with the bread itself, traditionally things are kept very simple, with just flour and water needed.

However, some starters may have been given sugar, honey, milk or another potentially non-vegan item to give them a boost. As usual, if it isn’t explicitly vegan, checking with the baker, shop or chef about how the sourdough has been made, including the starter, is wise for those who care about the minutiae.

Other issues that are far easier to spot arise when the sourdough is not a simple, traditional, “plain” one. There are lots of cheesy sourdough recipes and whether they are for cheddar sourdough, garlic and cheese, cheese and chive or anything else, clearly, if they include dairy cheese they are not vegan friendly.

We would expect that any sourdough that included cheese would be clearly sold as such though, so hopefully such loaves would be easy enough for vegans to avoid. The same can be said of breads that may include bacon, pancetta or other obviously non-vegan additions.

There are also some sourdough-style breads that may not pass muster with sourdough traditionalists but are sold as “sourdough” that include milk. This is less likely to be made clear in the labelling or on a menu in a café or restaurant.

Such recipes may also include eggs as well but the milk is added to create a softer crumb, combining the sourdough flavour with a more traditional texture. That may be great for those with questionable dentures but less so for vegans.

If you know a little about this ubiquitous bread then you will have surely heard the term “sourdough starter” bandied around. This is central to what defines sourdough because rather than use controlled, packaged yeast, sourdough rises due to wild yeasts. A sourdough starter is essentially just a thick “batter” of flour and water.

Natural, wild yeast spores and lactobacilli (a genus of bacteria) from the flour and surrounding environment work with the flour and water and this is how the magic of sourdough begins.

The yeast will feed on the available sugars and the starter will begin to ferment, the yeast multiplying, alcohol and acid being created and gasses bubbling away. Keep tending and feeding this flour and water mix for a week and you’ll have a yeasty, fruity, slightly sweet-smelling, slightly boozy sourdough starter!

This starter dough, if looked after correctly and fed, will last indefinitely, giving birth to as many delicious vegan sourdoughs as you care to bake. Each will be imbued with the delicious tang and perfectly chewy texture for which sourdough is known, both characteristics coming about thanks to this ancient method of production.

Made from Basic Ingredients

It is believed that sourdough dates back more than 5,000 years and this type of product has constituted almost all bread throughout the history of time. Modern production methods using controlled “baker’s” yeast are less than 200 years old by contrast, so in a sense, for a long, long time, all bread was sourdough.

Aside from the unique way in which sourdough is leavened, the rest of the production process is fairly straightforward. Some of the starter is combined with strong bread flour, water, salt and sometimes a vegan cooking oil, such as olive oil or rapeseed oil. The mixture is kneaded, is subject to a long, slow prove, then a second warmer one before being baked, initially at a high temperature with a little steam to generate the characteristic crust.

Is Sourdough Healthier Than Normal Bread?

Sourdough is often sold with at least some allusion to it being particularly healthy but whether or not it really is “better for you” than “normal” bread is definitely questionable. Quite what we mean by better for you and normal bread are also open to debate too but there has been some research into sourdough and its health and nutritional benefits.

Sourdough has a lower glycaemic index than many other breads and this is broadly considered a good thing, especially for those looking to control their blood sugar (something we consider in general terms in our article Can a Vegan Diet Help with Diabetes?).

It may also be easier to digest, with suggestions this may be due to its prebiotic content. There is also an argument that it is healthier than many breads in a general sense because it is often less processed and made to a more traditional recipe, with less salt and fewer, if any, additives.

Probably the biggest influence on how healthy a bread is though is whether or not it is wholegrain. Sourdough can be made with either white, processed flour, or with wholegrain and the latter will always be the healthier option. Whilst some websites might proclaim sourdough to be ”one of the healthiest breads”, their support for this is based on small, imperfect research at best.

Sourdough is usually vegan, it is in our opinion delicious but, especially if you are eating a white sourdough loaf, it remains a form of refined carbohydrates with little micronutrient quality. 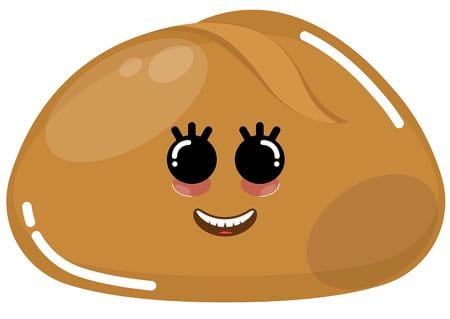 Sourdough is a delicious and traditional type of bread that is highly likely to be vegan. Making it yourself is one way to make sure it is entirely plant based but, in general, any sourdough that doesn’t contain obviously non-vegan additions, such as cheese or bacon, should be vegan friendly. Made with just flour, water and salt, sourdough can be produced with different flours, or combinations of flours, with wholegrain the healthiest pick.

If you eat sourdough in a mainstream (non-vegan) restaurant or café, or at a friend’s place, asking if any non-vegan ingredients have been used is wise. Some recipes use honey, whilst milk may also be added, and some are even enriched with eggs and/or butter. On the whole though, sourdough is fine for vegans to consume.