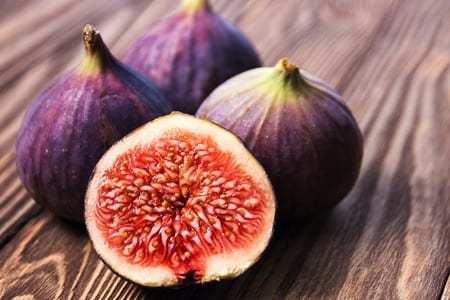 Figs are the fruit of the Ficus carica tree and so, given trees certainly aren’t animals, they must be vegan… right? Well, despite the fact they earn an inclusion in our Things You Didn’t Know Weren’t Vegan feature, yes, figs are indeed vegan.

So, why, then, do they feature in a piece about non-vegan foods? And, why are we even discussing the issue if it as simple and clear cut as all this? Well, there are lots and lots of ostensibly vegan foods that on closer inspection may have areas worthy of closer inspection.

When it comes to sugar the processing can be an issue; with wine (which is essentially just grape juice!) the way it is filtered can be problematic; almonds are considered non-vegan by some due to their use of bees for managed pollination; whilst palm oil is technically vegan but is avoided by many vegans due to its negative environmental impact.

When it comes to figs though, things get a whole lot more interesting, or perhaps weird, depending on your perspective. Some people believe figs are not vegan because with many varieties there is a high chance the fruit contains a wasp! Wasps are animals, vegans don’t eat animals, or use items that require their exploitation, and so, the argument goes, figs are not vegan. But is this really true and what is the full story about figs and wasps?

Do Figs Really Have Dead Wasps Inside? 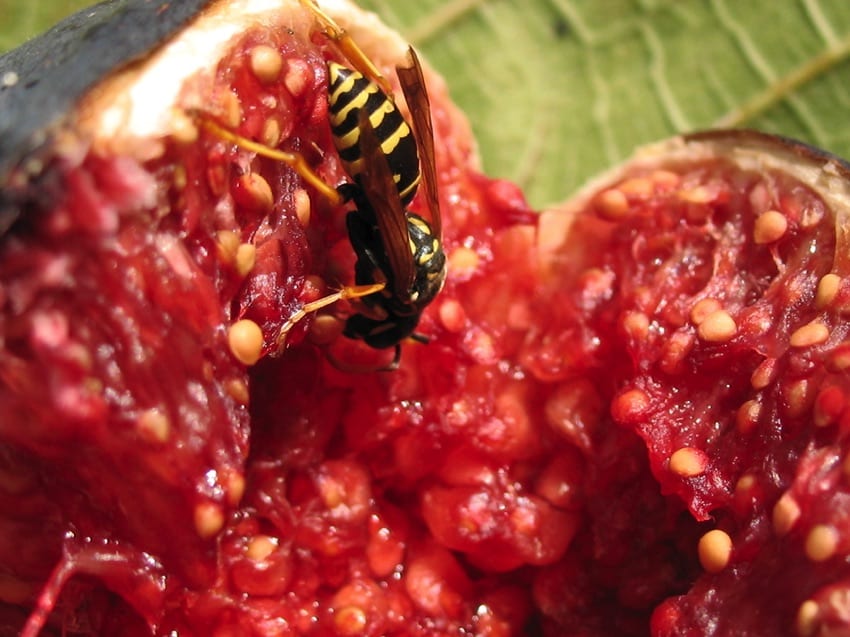 We live in a world of misinformation and fake news and the subject of veganism is far from immune to this, as we discuss when debunking some common vegan myths. So, do figs really have wasps inside?

Whilst this may sound suspiciously like some form of urban myth it is actually true, at least in one sense. Whilst some types of fig can develop fruit without pollination, many others rely on a particular type of wasp, simply known as a fig wasp (though in actual fact there are almost 1,000 different species of them) to pollinate them in order for them to set fruit.

Through an amazing feat of nature, evolution, God or just staggering good luck, and what biologists call “mutualism”, certain types of wasp and fig plants rely on each other to reproduce. We’re going to side with Darwin in terms of how we understand this process and scientists believe the relevant species of figs and wasps evolved alongside one another. There are a similar number of very slightly different types of fig tree and each can be pollinated by just one “partner” species of wasp.

The Science Behind It

A female wasp will enter the flowering structure of the fig via a narrow passage that is so tight it will cause her wings to be ripped off, thus rendering her unable to leave. If the fig happens to be a female then she will pollinate it but cannot lay her eggs inside. Powerless to escape, she will die inside the fig and then, so the theory goes, be eaten by a human – vegan or not.

If, on the other hand, the female wasp enters a fig that is male ,she can successfully lay her eggs. Sadly, for her, still wingless she will once again die inside the fig but, more happily, her eggs will give rise to new wasps. Before turning into fully formed wasps, the larvae will tunnel their way out of the fig, taking the male pollen with them, which will then go on to pollinate female figs via the process described in the paragraph above.

No matter what, the female wasp will die inside the fruit that is then potentially eaten by us. Is this a problem for vegans? Perhaps more worrying, are the crunchy bits inside figs actually a wasp’s body parts, as myth would have it?

Figs are very nutritious and there are some studies that link them to helping control blood sugar levels, as well as having the ability to reduce the risk of heart disease. More certainly we can say they are reasonably low in calories, whilst also containing small levels of a really wide range of vitamins and minerals, including vitamins A, C, K and various B vitamins, as well as calcium (few fruits contain more), iron, magnesium, potassium, copper, zinc and manganese.

Figs certainly help contribute to a healthy, balanced diet but given what we know about wasps, should vegans be eating them? Well, let us first address the issue of those crunchy “wasp” parts: fear not, the crunchy bits are just seeds, not the remains of a female wasp or her unhatched eggs.

What Happens to the Wingless Wasp in the Fig Then? 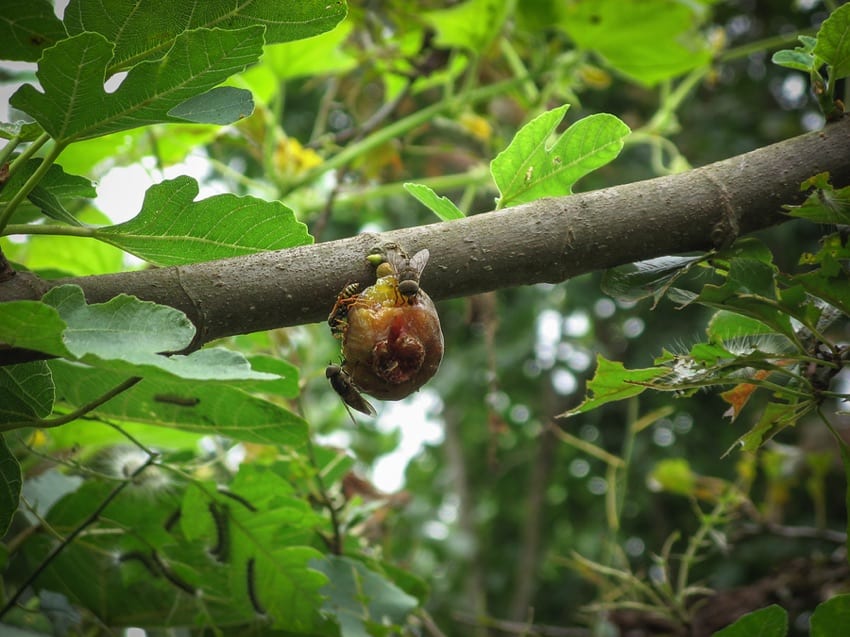 The wasp is actually digested by the fig using an enzyme called ficin. This protein-digesting substance is found in the walls of the fruit and entirely breaks down the wasp so nothing at all remains. As such, you are not really eating the wasp, any more than a meat-eater is eating grass when they consume beef.

More importantly, for any vegans concerned about the ethics of this issue is the fact that this is a wholly natural process. Whereas those farming almonds use commercial bees to pollinate their crop, when it comes to figs the process is entirely organic and is not being manipulated by farmers. What’s more, whilst there would be no fruit and indeed no more fig plants without the wasps, the same applies the other way round: the wasps cannot lay their eggs and thus reproduce in any other way.

The two forms of life depend upon one another and so there is no exploitation or cruelty taking place. This amazing obligate mutualism takes place independently of human involvement and so it really is unfair to suggest that figs are non-vegan.

Whilst it is true that the majority of figs have had a wasp die inside them, it is in no meaningful way true to say that a vegan eating such a fig is really eating the wasp. The crunchy texture inside a fig comes from its seeds, not the remnants of the wasp, which is completely digested by a naturally occurring enzyme within the walls of the fruit.

This whole process occurs naturally with no human involvement or cruelty to animals. The survival of both sets of species, of fig wasps and fig trees, is dependent on this astonishing feat of nature. Therefore, in our opinion, and that of just about every vegan you might ask, figs are indeed vegan friendly.