What could be more vegan than a coconut and the milk, water, oil and other products that come from these fruits? Well, it has become apparent that not all coconut products are as ethical and vegan friendly as one might expect.

In fact, buying some coconut milk might actually contribute towards cruelty to monkeys, specifically southern pig-tailed macaques. This clearly wouldn’t sit well with vegans, many of whom might use coconut milk or cream as vegan alternatives to dairy milk and other products.

According to an investigation carried out by PETA Asia – the Asia branch of People for the Ethical Treatment of Animals (PETA), monkeys in Thailand are abducted from the wild, and then “kept chained, abusively trained, and forced to climb trees to pick coconuts that are used to make coconut milk, meat, flour, oil, and other products.”

As you can see for yourself in the video posted on YouTube by PETA, the monkeys are kept in poor conditions and are clearly distressed. This is definitely an example of both exploitation of and cruelty towards animals. It might be even more shocking to some given the relative closeness to our species of these intelligent and social primates.

The PETA report goes on to state that monkeys who attempt to defend themselves against their captors may have their canine teeth removed. There is evidence that the monkeys are also transported in cramped cages and forced to work whilst collared and tied.

Given that these trained monkeys can pick up to 1,000 coconuts a day when a human might manage only about 80, and indeed that monkeys don’t require salaries, it is no surprise such exploitation exists, especially in a country with less stringent red tape and less concern for animal welfare.

The PETA report specifically names two major coconut producers from Thailand – Aroy-D and Chaokoh – as using coconuts that have been farmed with the use of monkey labour. The report also suggests that the practice of forced monkey labour in coconut farms is so widespread in Thailand that any coconut products that originate from the country might well have caused monkeys to be exploited and mistreated.

It is true that these products are not as commonly available as some in the United Kingdom. Indeed, after something of an uproar following the PETA report, including anger expressed by Prime Minister Boris Johnson’s fiancée, Carrie Symonds, many UK supermarkets and other retailers have committed themselves not to sell any products that use monkey labour.

Accordingly to reports, “Waitrose, Ocado, Co-op and Boots vowed to stop selling some goods”, Morrisons had already removed products that utilised monkey labour from their shelves and Co-op said they “didn’t permit the use of monkey labour” to source ingredients for any of their products.

Meanwhile, at the time of writing, Asda also pledged to investigate and to remove certain brands from its shelves, while also adding, “we will not tolerate any forms of animal abuse in our supply chain.” If that is the case, many vegans might well question how they can sell meat and dairy products, given the many documented instances of animal abuse in the meat and dairy industries… but let’s confront such hypocrisy another time.

Tesco, meanwhile, told the BBC, “Our own-brand coconut milk and coconut water does not use monkey labour in its production and we don’t sell any of the branded products identified by Peta.”

How Can You Be Sure Your Coconut Milk Is Cruelty Free?

In reality, unless you literally grow your own fruit and vegetables and control exactly what (non-animal and non-chemical) fertilisers and pesticides are used, and use no animals or animal products during harvesting, it is impossible to be 100% sure that anything you eat is guaranteed to be perfectly, flawlessly vegan. Even the likes of avocados, almonds and even organic fruit and veg have question marks over them in terms of their vegan credentials.

On the coconut front though, the PETA report suggests that coconuts originating from the likes of Brazil, Hawaii and Colombia use “humane methods, such as tractor-mounted hydraulic elevators, willing human tree-climbers, rope or platform systems, or ladders, or they plant dwarf coconut trees.” The report doesn’t, however, mention the possible practices used by some of the other big coconut producers of the world.

It is possible, for instance, that other countries, particularly those in which southern pig-tailed macaques and similarly trainable monkeys reside, also use force monkey labour. And, though we are not aware of any evidence of this at the time of writing, Indonesia for one is not renowned for its ethical treatment of monkeys. It is not, then, beyond the realm of possibility that monkeys are used to pick coconuts in countries other than Thailand given the economic rewards it brings to the farmers.

According to the Food & Agricultural Organization of the United Nations, there were 12 countries in 2018 that produced more 500,000 tonnes of coconut per annum. It is notable, however, that the none of the world’s major producers of coconuts (based on 2018 figures) was graded as better than Thailand in terms of their standards of animal protection (according to the Animal Protection Index (API), based on the countries that were included) in relation to their animal welfare policy and legislation. Three of the top six producers were rated as worse than Thailand, including the top two producers, Indonesia and Philippines (both of which are home to macaques).

PETA do state that, “In general, coconut products originating in Brazil, Colombia, Hawaii, India, and the Philippines are supplied by companies that don’t use monkey labour.” But there could be some instances that slip through the net in countries that are not exactly red hot on policing animal cruelty.

How to Avoid Monkey-Picked Coconut Products 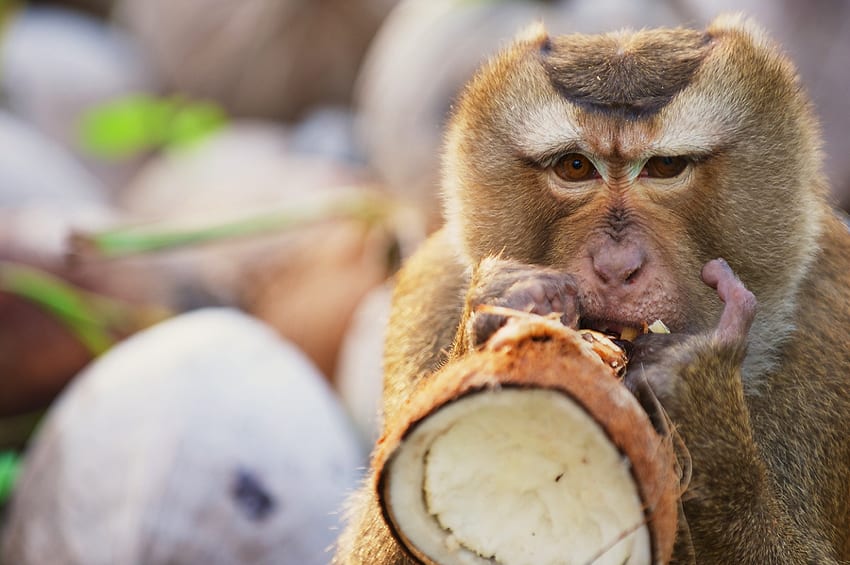 Coconuts and the many products that can be made from them are vegan staples and yet it seems certain that much of the fruit is harvested using slave animal labour. So, what is a good vegan to do?

The best thing to do is to avoid the specific brands mentioned by PETA and stick to retailers that have confirmed their commitment to avoiding monkey-harvested coconuts. In addition, for the moment at least, it may be wise to avoid any coconut milk and other products that have their origins in Thailand, Indonesia and Philippines.

With many products it might not be clear where the coconut-based ingredients have come from, in which case checking with the retailer or contacting the manufacturer may be the best option. Doing this by email or Twitter (which is all the better for being in the public eye!) is easy enough and you can ask them directly where their coconut products originate and how they can be sure monkey labour has not been used to pick the coconuts in question.

Most companies worth their salt will know the origins of their ingredients and will be happy to share the information with you. If they are not, perhaps they simply don’t know or might even have something to hide.

Of course, all this might just make you want to avoid coconut milk and other coconut products until there is a more robust system of assessing which products are completely free of cruelty to monkeys.

If you decide to go down that route you have other options, such as opting for oat milk and cream in many instances. Or you could only buy and use coconut products from trusted, ethical companies, perhaps after they have confirmed in writing or in the media that their products have never made use of monkey labour.

One such example would be the widely available coconut milk produced by
Biona. We contacted them just to be sure and their customer care team got back to us very quickly. They confirmed:

The coconuts used in all of our Biona products are picked by hand in Sri Lanka using long plucking sticks that have a curved metal knife at the top to release the coconuts. No monkeys are ever used during the coconut picking process.

Biona is a source of many great vegan – and ethical – products, many of which are sold by TheVeganKind Supermarket and Waitrose. Alternatively, you can order direct from their website, and this ethical food producer certainly sets high standards when it comes to animal welfare and indeed the welfare of human workers too.

Based on the investigation from PETA Asia, it is clear that the use of forced monkey labour to pick coconuts takes place in Thailand. There is a possibility these or similar practices take place in other coconut-producing countries too, though we have not seen direct evidence of this.

For vegans wishing to ensure they do not buy coconut milk or other coconut products that could essentially fund this cruelty to the southern pig-tailed macaques (and possibly other species of monkeys), there are a few options:

While all this might leave many vegans asking whether anything at all is really vegan, others will at least be heartened that such animal cruelty has been highlighted and that major retailers around the world are dropping products on the back of it.

It will also help to educate consumers in general as to the prevalence of animal cruelty in the food industry. Dare we suggest, it might even help some non-vegans to join the dots and begin to see the similarities between the cruelty dished out to intelligent and socially aware monkeys in coconut farms in Thailand and the cruelty meted out to pigs, cows, sheep and other intelligent and socially aware animals in farms in the UK and elsewhere. We live in hope.