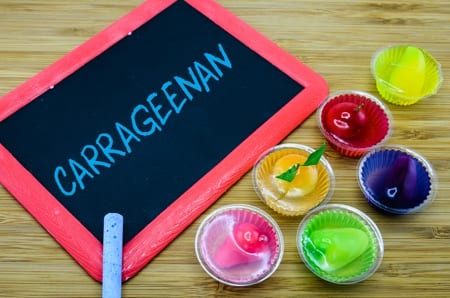 Carrageenan might occasionally pop up on the list of ingredients of a variety of food products as it is used as a thickening or gelling agent. But what is carrageenan, is it safe to consume and, crucially for readers of this site, is carrageenan vegan?

Well, let’s tackle the last question first. As carrageenan comes from seaweed (which is clearly not an animal!), carrageenan is indeed vegan. As far as we can ascertain none of the processes used to obtain or refine carrageenan require the use of any animal products. As such, carrageenan is fine for those on a plant-based diet and, indeed, it is often used as a vegan alternative to gelatine.

Despite there being little controversy about the vegan-friendly status of carrageenan, there have been questions asked about whether or not it is safe to consume. From the available research at the time of writing, there is no reason to suggest that food-grade carrageenan is not perfectly safe to consume in the quantities that are likely to be found when it is used as a food additive. We will go into this in more detail later, and explain why so many people think it might not be safe. Before that though, let us first explain a little more about what carrageenan is, where it comes from and how it is processed.

Often referred to in plural form, the term carrageenans refers to a family of high-molecular-weight polysaccharides that have been extracted from red edible seaweeds. The particular kind of seaweed from which carrageenans are extracted is also known as red algae and is apparently one of the oldest groups of eukaryotic algae there is. If that little nugget doesn’t impress your friends then there truly is no hope for any of us!

Various seaweeds can be used to obtain carrageenan, including chondrus crispus (otherwise known as Irish moss, despite not actually being moss), which has been used to produce gelatinous extracts for food since around the 15th century according to some sources. Others suggest chondrus crispus has been used for the purpose of food since around 400 BCE, and perhaps even for millennia for other uses.

There are three types of carrageenans (based on the seaweed from which they were extracted) with commercial applications which are called, iota, kappa and lambda, and have slightly different properties and applications.

Carrageenan has been designated as a recognised food additive by the EU with E number E407. Note that E407a refers to ‘processed eucheuma seaweed’, also known as ‘semi-refined carrageenan’, which is related but slightly different as it is – as the name suggests – a less-refined version of carrageenan (though it is still vegan). From a technical perspective, carrageenan is essentially a dietary fibre.

How Is Carrageenan Made?

It is a fairly straightforward process that is required to produce carrageenan that is suitable to use as a food additive. The traditional method involves boiling rinsed seaweed in water, with cold water quickly being added before the mixture is strained and cooled.

Industrial production, which has been undertaken since around the 1930s, involves growing various species of red algae (such as elk horn sea moss) on nylon lines that are tied between floats. These are grown for around three months before being harvested. The seaweed/algae (whatever you want to call it!) is then dried and sent to the carrageenan manufacturer in bales.

The dried seaweed is ground and washed, and impurities such as sand are removed. Processes of centrifuge and filtration are used to remove the cellulose (cell walls). A process of precipitation is undertaken to acquire the concentrated carrageenan from the solution, with isopropanol or potassium chloride used to produce a gel.

As such, the semi-refined version contains more cellulose and should not be confused with ‘degraded carrageenan’ (also known as poligeenan), which is potentially harmful if consumed (see below), but which is not categorised as a food additive and it mainly used in medical research and as a diagnostic tool in medicine.

Is Carrageenan Safe to Consume?

There has been much debate over the years about whether carrageenan is safe to consume. The main concerns, however, have been about the potentially harmful consequences of consuming poligeenan (degraded carrageenan). While this is related to carrageenan in that it is produced from carrageenan by degrading it with strong acid and high temperatures, this is certainly not the stuff that will be added to foods.

Food-grade carrageenan, both refined and semi-refined, has been extensively tested and various organisations including the World Health Organization have concluded that it is safe for humans, despite some suggestions that it maybe isn’t a great idea to put it in infant formula in some circumstances.

A study by the University of Nebraska that reviewed research on the possible toxicological effect of carrageenan concluded that “carrageenan is not degraded to any extent in the gastrointestinal tract” and that it therefore does not become the potentially harmful poligeenan that some people feared would be produced in the gut of humans.

Vegan Foods That Can Contain Carrageenan 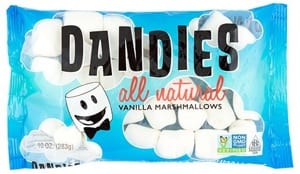 As well as being an ingredient in many processed foods, it can also be bought as a gel so that you can use it in whatever vegan recipe you like if you need something to act as a thickening agent. Alternatively, you can make your own carrageenan using the techniques employed over centuries in Ireland. Now that’s one for the bucket list!

In conclusion, it is safe to say that carrageenan is indeed vegan friendly and is also safe – based on the quantities anyone is ever likely to consume and the available research at the time of writing. This is just one more ingredient about which diligent vegans need not be wary. And, hopefully it will become more and more popular as a vegan-friendly alternative to gelatine in all kinds of foods.