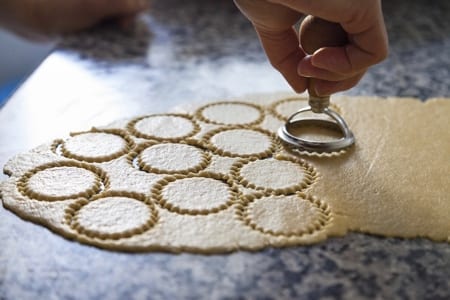 As any pâtissier or pâtissière worth his or her salt – or sugar – would tell you, there is a lot more to making pastry than simply chucking together a load of flour, water and fat. The varying methods required to make particular types of pastry range from simple to extravagantly tricky. This makes sense given the versatility of this doughy concoction. After all, it forms the basis of such a diverse range of foods: from croissants to croquembouche, éclairs to empanadas, pumpkin pie to pretzels, there is no doubt that the world would be a poorer place without pastry. Now we’ve made you hungry, we will now answer the question on everyone’s lips: Is Pastry Vegan?

Like so many foods, the answer as to whether something is or isn’t vegan results in the answer: it depends. In the case of pastry, the bad news is that the traditional way of making it (or at least most of the main versions of it) include butter among their (usually short) list of ingredients. The good news, though, is that there are many ways to make vegan-friendly pastry by using one of the many vegan substitutes for butter. Some of these are more effective than others, which we’ll come to.

First, though we’ll run through the most common types of pastry, their main ingredients and some examples of what each type of pastry is used for:

As you will have no doubt noticed, only filo pastry (or phyllo pastry if you prefer) does not include an obviously non-vegan ingredient, with the others all requiring one or more of butter, lard, suet or eggs. Most filo recipes require a little oil, but as there are so many vegan-friendly cooking oils available, and these all work just fine in this pastry, we didn’t flag this up as an issue.

Vegans, or those seeking to follow a vegan diet, do not need to go through life without tucking into the many delights pastry has brought us (though steak and kidney pies will have to go!). Instead, it is simply a case of replacing the few non-vegan ingredients mentioned above with vegan-friendly options. As you will see below, this should not pose a major problem in terms of the cost or availability of the replacements, and it is likely they will be healthier too.

Vegan baking is just another area of the broader vegan lifestyle that is experiencing huge growth right now. More and more people are enjoying vegan pastries and if any further proof (pun intended) was needed, there was even a vegan week on the Great British Bake Off! Ready, steady, bake!

There are many relatively painless options for you make your own vegan-friendly pastry. Of course, if time is short or you simply don’t fancy getting flour in your finger nails, there are also some readymade pastry products on the market that are vegan friendly, though some contain some hidden nasties.

The obvious vegan-friendly replacement for butter when making pastry is margarine (made from vegetable oils). This gives as good a consistency to the pastry in most cases as butter or lard, though you might need to experiment a little with the proportions of ingredients. Some vegan pastry recipes use vegetable oil in place of butter.

The vegan egg alternatives that are available when baking are numerous, but some are certainly better than others. For instance, a number of so-called “egg replacer” products are on the market that are made mainly from potato and tapioca starch, along with a few vegan-friendly additives to assist rising.

Alternatives that some people opt for include mashed bananas or apple sauce, but while these are fine for some baking products as egg alternatives, they will not tend to work so well when you are attempting to make the rather delicate choux pastry.

Suet is basically fat, and though it is usually sourced from sheep and cows, it can also be made from vegetable fats. You can make your own vegan-friendly suet but it is easier and relatively cheap to buy it ready-made.

Note, however, that a lot of the vegetable suet available has been made with palm oil, which throws up its own issues for many vegans.

There are numerous plant-based cooking oils available, so really it is a case of experimenting or picking your usual favourite. For us, olive oils tends to be a decent go-to option for pastry, while sunflower oil generally works well too.

Many of the readymade pastry brands in the UK – including Jus-Rol – use vegetable fats rather than butter in their pastry products and thus they can appear to be vegan. However, it is always worth checking the ingredients as many will also contain palm oil (which carries various ethical concerns and is considered non-vegan by some, despite carrying the Vegan Society’s certification) and L-cysteine (which is made from duck feathers, among other things).

There are one or two smaller brands who appear to be free of such additions, but given that it really is quick and cheap to make your own pastry, it may be worth doing so to be on the safe side. 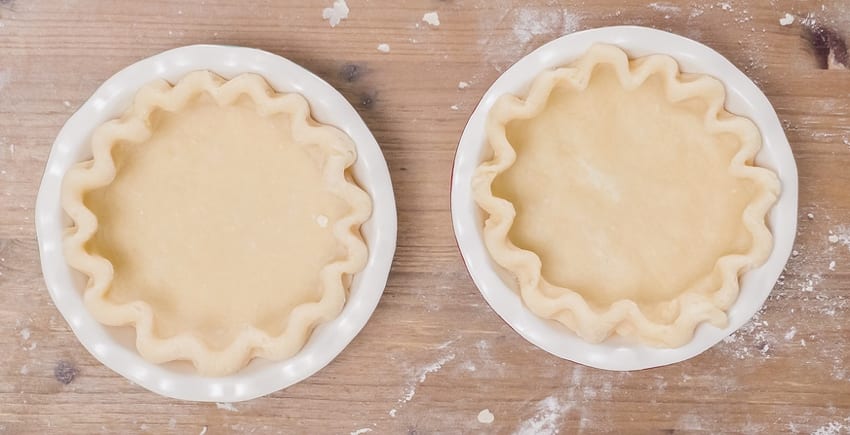 In and of itself, pastry is not really that good for us. It is high in fat and carbs, and doesn’t have too much in the way of protein, fibre or micronutrients. But if you fill it with lots of tasty vegetables, there is no reason why it can’t be used to create a highly nutritious and healthy pie or tart. Of course, we all need to let loose every so often, so if you fancy treating yourself to an extravagant vegan-friendly tarte tatin, why the hell not?

Possibly the best news for health-conscious vegans is that the healthiest pastry is also the most suitable for a vegan diet. Given that it’s the fat that usually renders pastry unsuitable for followers of a plant-based diet, that makes perfect sense.

Essentially filo pastry is just flour and whilst it doesn’t serve up too much goodness, it’s quite neutral nutritionally. The exact information will vary depending on the product or recipe you use but typically a serving would be around 100 to 150 calories. That would be almost fat-free, low in sugar and offer up a small but worthwhile serving of protein. If you like your pies vegan, healthy and crunchy, filo is the way to go!