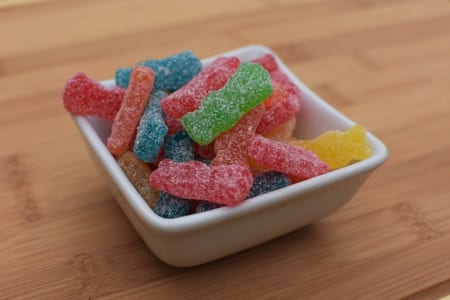 Sour Patch Kids are a tangy jelly sweet that look a little like sugar-coated jelly babies. The multi-coloured sweets are similar in style and flavour to some of the sour sweets produced by Haribo. They have been around in the current guise since 1985 and were previously sold in the UK as “Maynards Sour Patch Kids”. But whether or not you are familiar with this confectionary creation is neither here nor there. For we are here to answer the simple question: are Sour Patch Kids vegan? And, for once, we have a very simple answer: no, Sour Patch Kids, in the UK at least, are not vegan.

In the Is It Vegan? section of our site, we rarely encounter such cut and dried queries as we have with Sour Patch Kids, which is something of a relief as there is no ambiguity here. The main reason Sour Patch Kids are not vegan (and indeed not even vegetarian) is that they contain gelatine, which is derived from the collagen of animals, usually from the bones or skin of pigs or cows.

If that is all you wanted to know, great, you have your answer: if you’re vegan, you should avoid Sour Patch Kids. Thankfully, as we detail below and also in our article on vegan sweets, there are plenty of vegan-friendly alternatives to Sour Patch Kids, even if you are specifically seeking that sour-sweet-jelly combo.

What Are Sour Patch Kids? 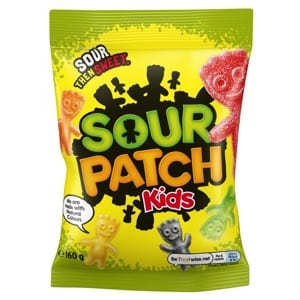 As mentioned, the standard Sour Patch Kids sweets are jelly sweets that are covered in sugar. They were created by American, Frank Galatolie, in the early 1970s while he was working for a confectioner called Jaret International.

The sweets where then known as “Mars Men”, but they were changed to Sour Patch Kids in 1985 (perhaps to take advantage of the subconscious association with the Xavier Roberts-created Cabbage Patch Kids dolls, which were extremely popular at the time).

In the UK, the sweets were produced by Maynards, of wine gum fame, who are now owned by food and drink behemoth Mondelez International (who also own Cadbury, among many other brands).

Ultimately, it is really just gelatine letting the side down here, depending where you stand on the palm oil front. But don’t worry too much, vegan sweet lovers, there are plenty of other options available to you.

A Note About About Palm Oil

Palm oil is something of a contentious issue when it comes to assessing whether or not it is vegan. On the face of it, given that it comes from plants, it is indeed, technically, vegan. But the environmental implications (including the destruction of the habitat of endangered animals) mean that many vegans view palm oil as non-vegan, especially those drawn to veganism for environmental reasons.

The problem is where the line is drawn in the vegan sand. Some people would not consider avocados and many other intensively farmed fruits, nuts and vegetables to be vegan because of the use of commercially managed bee colonies which are used to pollinate the crops. But where you draw your particular lines depends on your personal ethics.

The more information you read about the various issues, the better informed you will be when making such decisions. You could certainly do worse than checking out some of the many fine vegan documentaries that are out there during that research, many of which are eye-opening to say the least.

We go into a lot of detail about the best vegan sweets in our dedicated article on the subject. But if you are simply seeking a sugar-coated jelly sweet that is vegan friendly, here are some of the best options for you to consider:

Are Other Sour Patch Products Non-Vegan?

Having said that, it is possible future products might be fine for vegans, but be sure to check the ingredients and look out for gelatine initially and any of the other possibly non-vegan ingredients mentioned above. As ever, if in doubt, get in touch with the manufacturer who should be able to clarify the situation.

As we have seen, Sour Patch Kids contain gelatine and hence they are not vegan. Even if they managed to replace the gelatine with a non-animal alternative, their vegan credentials would not be completely convincing.

In short, if you are a vegan or aspire to follow a plant-based lifestyle, Sour Patch Kids are off the menu. As we also pointed out, though, there are plenty of sour jelly sweets that are vegan friendly that should fill the gap left by the absence of Sour Patch Kids. So, vegans with a sweet (and sour) tooth need not miss out.