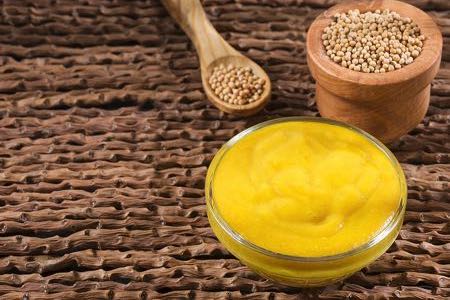 There are lots of great vegan condiments and we look individually at many of the major ones on this site, such as ketchup and soy sauce. Now it is the turn of mustard. So, a simple question: is mustard vegan?

Simple question it may be but that does not always mean there is a simple answer. When it comes to mustard we can give a relatively firm vegan thumbs up… with just a few caveats. We will look at what mustard is, where it comes from and how it is made in order to explain why mustard is normally vegan. We will also, of course, explain what those caveats are and what vegan mustard-lovers need to be watch out for.

Mustard comes in many forms but it is typically a yellow paste that adds a distinctive flavour to food and can be used as either a cooking ingredient or as a condiment. A Roman recipe from the first century explains that you will find “mustard not only suitable as a sauce but also pleasing to the eye … it is of exquisite brilliance”.

Indeed, mustard has been around in Europe since as far back as Roman times at least, and it is believed to have been the only pungent spice native to the region back then. Mustard seeds, from which the condiment is made, have been discovered at prehistoric sites in many areas of Europe and also at locations as far east as China.

Unusually, the plant and seed take their name from the condiment/sauce, rather than the other way round. The wider Brassicaceae family (that includes cabbages, broccoli, cauliflower and many more healthy vegetables) is home to both Brassica and Sinapis genera and these provide the many different types of mustard that exist. However, the word mustard itself which is used in some form or another in most European countries, comes from the process of making the condiment.

Whilst the Finnish and Danish use derivatives of the Latin plant name, sinappi and sennep respectively, the French (moutarde), Italian (mostarda), Irish (mustaird) and many others use a word very similar to the English mustard. This is derived from the Latin mustum and ardens and this etymology tells us much about how mustard was (and still is) produced.

Mustum refers to the musty fermented wine which was used and added to the ardens, meaning “hot”, seeds of the Sinapis plant. Traditional mustards are still made in this very basic way, with little more than mustard seeds and a liquid, typically an acid such as wine, vinegar or fruit juice. This acid helps temper the pungency of the seeds but then also helps preserve it too.

Most mustard comes from one of three families of plant that can be known simply as black mustard, white/yellow mustard, or brown mustard. Whatever seeds are used, they are typically but not always pounded or ground, before being steeped in liquid.

Of course, modern, mass-produced mustards often go through far more complex processes using more ingredients and steps in order to produce a cheap, consistent product with mass appeal and a long shelf life. However, at its purest and most traditional, the sauce or condiment we know as mustard is simply a mixture of a plant-based liquid and the seeds of another plant.

If seeds from one of the many different mustard plants are combined with wine, vinegar, fruit juice or even water, mustard would be vegan, right? Well, whilst that is a fair summary, as with many items in the Is It Vegan? section of our site, things are not always quite so simple.

As we alluded to above, many commercially available mustards are quite heavily processed so, as with any such food item, some caution is needed in terms of additives and E numbers. We do not believe non-vegan additives are common in mustard but if in doubt, check out our feature on which E numbers are and are not vegan.

Aside from E numbers, many mustards use xanthan gum (which is actually assigned E number E415) as a stabiliser but that is typically vegan. Many versions of this classic condiment may also contain sugar, which as we explain is sometimes not vegan friendly. If you are very strict about things it would be advisable to ask the manufacturer about their sugar unless the mustard is labelled as vegan.

Some “mustards” may also contain more obvious non-vegan ingredients and we use inverted commas as these are often not really mustards but rather mustard-based dressings, sauces or condiments. The most common offender is honey, which may go really well with mustard but is not vegan due to its impact on bees. Extra ingredients like these should be very easy to spot though, as they will usually be made apparent in the name of the product, or at least feature prominently on the label.

What is the problem with grape juice and a bit of yeast, you may ask? Well, as we explain, not all wine is vegan because animal-based fining agents are sometimes used (to filter the wine). This actually also applies to Champagne and other alcoholic drinks, including beer, although it is becoming less common.

Fining Agents in Some Wine Are Problematic

Fining agents can be dairy or egg-based, whilst isinglass, made from a fish’s swim bladder, is also often used. Blood and a whole range of other animal nasties can be employed to filter out yeast, bacteria and other particles and clearly many vegans would feel uncomfortable consuming a mustard made with wine that had come into contact with such animal matter.

Dijon Uses Wine Instead of Vinegar

The reason that Dijon mustard is particularly targeted is that this iteration of the condiment, from the Burgundian town of Dijon, is notable for the fact that it traditionally uses wine instead of vinegar. Dijon mustard has changed much over the years but according to fable at least, in 1856 a local man, Jean Naigeon replaced vinegar with verjuice.

Verjuice is a highly acidic liquid, often derived from unripe grapes but also from other sour fruits, such as apples. Over time this was replaced, or supplemented, with white wine, Burgundy, of course, being famous for its wines, both red and white. Given wine was, until relatively recently, almost always filtered with animal derivatives, such mustards have become to be seen as being unsuitable for vegans.

However, it is just not true to say that all Dijon mustard is not vegan. For example, one very popular and high class brand of mustard, both Dijon and wholegrain, is Grey Poupon. Dating back to 1777, this Dijon-born company use white wine from France in both of their mustards. However, both are vegan friendly and another classic name from the world of mustard, Maille, also produce a Dijon which appears vegan on the face of it.

Maille Is Vegan “On the Face of It”

Maille, now owned by Unilever but founded in France even earlier in the 18th century than Grey Poupon, do not use white wine in their Dijon mustard. The ingredients for their product are:

So, looking at these two major brands shows us that not all Dijon mustard contains wine; some mustards contain wine but are not Dijon; and that there are mustards of various types that both contain wine and are also vegan.

That is not to say that all Dijon mustard is vegan. For example, a small, super-traditional producer in France may produce a mustard using wine that has been filtered with isinglass or similar. By strict standards this condiment would not be vegan friendly.

But if you are a vegan who loves mustard then this issue is useful for highlighting one last area for concern: wine. If you see a mustard that lists wine, or even wine (or cider) vinegar and is not clearly marked or marketed as being vegan then it would be advisable to contact the producer to check if their wine specifically and mustard generally is vegan.

Earlier we looked at Maille products and said that their Dijon mustard “appears vegan on the face of it.” A number of websites that sell Maille products do actually list Dijon and other mustards, such as wholegrain, as being vegan. However, we contacted Unilever, who produce it, and after many confusing emails back and forth they stated the following:

I can advise that we are unable to guarantee that any of our products are suitable for vegans due to the possibility of cross-contamination as our lines are not tested and validated for that purpose.

They had initially told us that “I can confirm that none of our Maille Mustards are suitable for vegans, including the Maille Wholegrain Mustard. I’m sorry if this is disappointing news.” Well, yes, it is rather disappointing because we find wholegrain in particular rather delicious! We pushed them as to why this was the case, querying the ingredients and the fact that retailers were listing them as vegan and eventually they told us of the concerns with cross-contamination.

The risk of cross-contamination seems to be a bit of a get-out clause for many manufacturers who do not want to risk stating that their product is vegan and then subsequently have any problems if their practices are found to be less than perfect. This is understandable but it does make things very difficult for vegan consumers.

Conclusion: Most Mustard Is Vegan

Most mass-produced mustard is vegan friendly and that includes a number of popular Dijon mustards, especially for vegans who are prepared to consume a product where the only concern is a very small risk of cross-contamination. At its simplest, mustard is a mix of just two ingredients: mustard seeds and a liquid. Grey Poupon, for instance, boast that their mustard “Includes only 3 ingredients: Mustard Seeds, White Wine, Water”.

Of course, as with all foods produced commercially on a large scale, there is a possibility non-vegan additives may be used but, as far as we are aware, this is uncommon. Indeed, many of the most famous names in mustard, including Colman’s, Maille (vague cross-contamination issues aside), French’s, Grey Poupon and the likes of Biona, all offer a wide selection of vegan-friendly mustards. Perhaps the safest bet is to check directly with the maker of your favourite mustard. Most of the mainstream companies have excellent websites and you can clearly see which products are vegan.

If you see wine, or an alcohol-based vinegar listed as an ingredient on a product that is not expressly sold as being vegan, we recommend you contact the producer to check. Vegans concerned about the risk of non-vegan sugar should apply the same policy to sugar, whilst any mustard or mustard-based dip, sauce or condiment that contains honey is definitely not vegan.