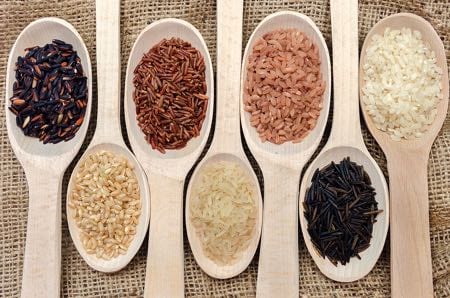 To many people, the issue of whether rice is vegan or not may seem simple. However, what is obvious to one person may not be so clear to another. Moreover, there are so many things you (maybe) didn’t know weren’t vegan because often the picture is far more complicated than it might at first appear.

Thankfully, unlike many items within our Is It Vegan? hub, when it comes to rice we can say without any doubt that yes, rice is vegan friendly. That said, even with this seemingly 100% plant-based grain, considered by many to be a vegan staple, there are some issues that may concern some vegans. We will look at those in due course but for now let us explain what rice is and why it is indeed vegan.

Rice Is Vegan & Here Is Why

Rice is the staple food for around 50% of the world’s almost eight billion people. Domesticated for around 9,000 years, there are now believed to be in excess of 100,000 varieties of this energy-dense grain. What we call rice is actually the edible seed of a type of grass and of those 100,000 plus varietals, most come from a single species of plant, Oryza sativa.

The word “sativa” may be familiar to those interested in CBD and CBD oil but it actually just means cultivated, with “oryza” meaning rice. A related species was also domesticated, though much later, probably sometime around the sixth century (though some sources date it to around 1,500 years earlier). Oryza glaberrima, also known as African rice (as it was first domesticated there), is less common but is popular due to its nutty and distinctive flavour.

Rice is the Seed of a Grass

Whether we are talking about African rice or Asian rice (as sativa is sometimes known due to it being a native of parts of the continent), or indeed one of the sub-species such as Indica or Japonica, or indeed even one of the many species of extant wild rice, all “rice” is the seed of a grass. There are many cereal-producing grasses and you do not need to be a botanist, horticulturist or food expert to know that grass is a plant.

So, rice comes from grasses, grasses are plants and therefore rice is vegan. In essence, that is true and for some people that is all they will want to know. If you simply wanted an answer to the question, “Is rice vegan?”, then the answer is undeniably “Yes!” That will no doubt be comforting to the many vegans, be they adherents of Jainism in India or hippies in California, for whom rice is very much a staple part of their diets.

To reiterate our earlier point, all rice is vegan friendly. It is all derived from the Poaceae, or grass family, which all fall under the plant kingdom. The same is true of long grain rice, short grain rice, basmati, black, brown, white, red, sticky, paella rice, risotto rice or any other rice you care to mention. Vegan rice fans, rejoice. Rice is vegan.

Are There Any Reasons Rice Might Not Be Vegan?

Well, we’ve said this is a pretty clear cut case but is there anything vegans should look out for? Well, aside from possible ethical and environmental concerns, which we will address shortly, the answer is not really. At least not if we are talking about rice in and of itself.

Whilst rice is often served relatively plainly, as a side dish, it is also frequently a key part of the dish or is combined with other ingredients and flavourings. So, whilst the white rice you might use for a rice pudding is vegan, the finished dish isn’t if you add dairy or other non-vegan ingredients. Equally, whilst carnaroli or arborio (the latter of which is a cultivar of Japonica rice and falls under the sativa umbrella) are both vegan, a seafood risotto made with them obviously isn’t.

The point is – and once again this may seem obvious to many – that just because a dish is rice-based or includes rice doesn’t mean it is vegan friendly. Fried rice dishes may include egg, meat, or be cooked in animal fat for example, whilst pilau and related dishes are often made with butter or ghee. Equally vegan-sounding risottos may be finished with cheese, cream or butter, vegetable paella could have been cooked in a meat or seafood stock, whilst other rice dishes could have relatively hidden non-vegan ingredients.

Aside from such “homemade” dishes, it is also worth checking any rice-based ready meals, processed rice goods, or pre-cooked and microwaveable rice. As usual, unless the item is sold and marketed as being vegan, it is always worth checking the label and contacting the manufacturer if you are in any doubt. Check out our info on vegan breakfast cereals for the lowdown on Rice Krispies.

Do Ethical or Environmental Issues Discredit the Vegan Credentials of Rice?

Whilst we are more than happy to say that rice is vegan and suitable for those on a plant-based diet, if you are a vegan for environmental reasons then you will be fully aware that there is a wider picture to consider. Some vegans (and non-vegans) question whether we should be consuming the likes of palm oil, almonds and many other foods due to environmental issues surrounding them. When it comes to rice, do vegans have anything to worry about?

One concern often cited about rice is that it requires a lot of water to grow it. For some this will have no impact on its vegan credentials but for others the environmental and ethical issues around this are worth at least being aware of.

Getting suitable water to crops can use quite a lot of energy and of course this contributes to CO2 emissions and climate change. Given climate change is set to wreak destruction upon countless species of animals, including of course humans, many vegans feel it is only right and proper to consider this. But just how bad is rice?

A 2018 report suggested that steps made to reduce the impact of rice farming may actually have worsened it! That same feature said, “Past estimates have suggested that 2.5 per cent of human-induced climate warming can be attributed to rice farming.” How accurate that is remains questionable but it is still a startling figure, although it should also be remembered that rice provides more calories globally than any other food and as much as 75% of daily intake in countries, including Cambodia and Bangladesh.

Rice farming is far from perfect and given how much of this crop is grown, trying to improve how it is produced makes sense. However, as we have stated elsewhere, all mass scale farming is sure to have a significant impact on the environment – that is unavoidable. There are over seven and a half billion people to feed and whilst we may be able to stop or limit flying and alter how we heat our homes, we can hardly stop eating.

Those that like to criticise veganism often point to the environmental damage done by crops, such as soya, almonds and, in this instance, rice. Such criticism and media reporting is often incomplete at best and misleading and unfair at worst. For example, whilst soy and soy products are widely eaten by vegans, the majority of soy farming is to make feed for livestock.

We believe that this attempt to discredit veganism (if you view it that way) is also taking place when it comes to rice. A superb article in the Scientific American essentially supports that belief.

It stated, among other brilliant incites, some of which do cast rice in a bad light environmentally, that, “When all greenhouse gas emissions from food are taken into account, rice emits more greenhouse gases per calorie than wheat or corn but less than fruits, vegetables, legumes, or any animal sources.” That is a really key and decisive factor that shows that yes, rice does contribute towards warming but it is still a far more efficient way to feed the planet than many other foods.

The article also makes the excellent point that relatively speaking those in the west, where veganism is most prevalent, actually eat relatively little rice. They say:

Rice is an important source of nutrition and part of the cultural heritage for billions of people and can be grown in places other crops can’t, so I bristle at any implication that people who rely on rice as a staple should cut down on it or are making irresponsible choices by surviving, and throwing shade at consumers who reduce their meat consumption but not rice seems particularly unhelpful.

As said, this balanced article did bring some insight with regards to the downsides of rice too. In conclusion it advised that, “statistics I found about the environmental impact of rice farming did surprise me. I didn’t realize it was such an outlier from other grains in terms of its climate impact…”. This relates to the fact that it is worse for the environment than other key, staple cereals, such as wheat.

Rice of any kind at all is vegan, being the edible seed of certain species of grasses. Not all rice dishes are vegan and many classical rice dishes, from Paella Valenciana to seafood risotto and from rice pudding to chicken fried rice, are certainly not.

In terms of the environmental impact of rice farming, it is significant. However, that is inevitable for a crop estimated to provide 15-20% of the world’s calories. Whilst it compares unfavourably to wheat and some other grains, it is a more efficient source of food (in terms of total greenhouse gas emissions per calorie) than virtually all fruit, vegetables and legumes, and more efficient also than all animal-based foods. Therefore, once again, we are happy to state that rice is unequivocally vegan.