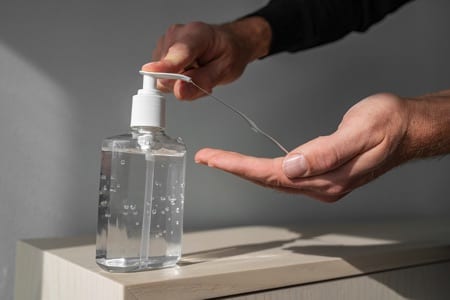 Alcohol-based hand sanitiser (also known as antibacterial hand gel or alcohol-based hand sanitiser, or even just hand gel) comes into its own in certain situations: when travelling in places with few or no hand-washing facilities, when camping or at music festivals, in hospitals and other environments that require heightened cleanliness and hygiene, or indeed when there just happens to be a global pandemic, such as the severe acute respiratory syndrome coronavirus 2 (SARSr-CoV-2) – the virus also known as COVID-19 or just the coronavirus.

But while the chances of actually being able to purchase any hand gel might be rather limited in the midst of the panic-buying that accompanies a pandemic, there are plenty of people who follow a plant-based lifestyle asking the question: is alcohol-based hand gel vegan?

Well, the good news is that, yes, the hand gel is indeed vegan. At least most of it is. In this article, we’ll delve into the pristine world of hand gels, explain how they differ from your standard soap products, and point out any things vegans might want to watch out for that might render their hand gel/sanitiser non-vegan.

What Is Antibacterial Hand Gel Made From? 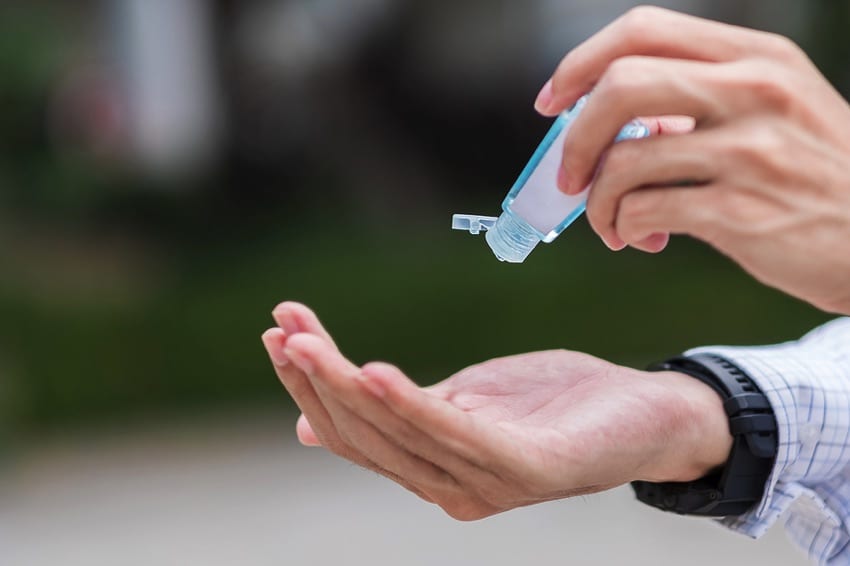 The vast majority of hand gels and sanitisers that come in gel form have an alcohol (usually ethanol) as their main active ingredient, usually between 60% and 95%. Ethanol will be familiar to anyone who has ever had a drink of beer, wine or any other alcoholic beverage, as this is the main alcohol present in such drinks.

Ethanol can be made from glucose or starch from a wide variety of plant sources (as is the case when producing alcoholic beverages), through fermentation processes assisted by yeast. But on an industrial level for use in hang gels (among other things) ethanol can also be produced using a variety of chemical methods, including the hydration of ethylene, which is an organic compound that is obtained from crude oil.

Whether the ethanol in question is produced from plant sources or through a chemical route, neither would contravene the principles of veganism. As we explain in our Is Yeast Vegan? article, yeast is neither a member of the plant kingdom, nor the animal kingdom, but it is definitely vegan friendly.

As for the chemical production methods of ethanol, there is no reason any of them should contain any animal products (unless of course you classify crude oil as an animal product as it was formed through a mixture of plants and animals millions of year ago… but most vegans wouldn’t take the view that oil and its many products – including anything plastic – should be classed as non-vegan).

Alcohols other than ethanol (such as isopropanol) are sometimes used in hand gels, but none of these are produced from animal products and so are also vegan friendly. So, while it is not the alcohol in the hand sanitiser that could render the product non-vegan, is it possible other ingredients that are added may have been derived from animals?

What Could Stop Hand Sanitiser Gel Being Vegan?

Because alcohol-based gels have a tendency to cause dryness in the skin, manufacturers of hand sanitisers usually add one or more ingredients to counter the drying effects. These could be in the form of moisturisers (such aloe vera, which comes from a plant) or humectants (which attract moisture to and retain moisture on the surface of the skin).

One common humectant used in hand gels is glycerol, which can be produced from either plant or animal sources. Another possible moisturiser that could be added is palm oil, which some vegans believe contravenes the principles of veganism on environmental grounds and the possible harm done to animals (though this is open to debate, and there are many other vegan products that could fall foul of arguments that some view as side issues, including almonds).

There is also the possibility other ingredients that have come from animals might be added, for instance to add a particular fragrance or to promote a particular chemical property. With many such ingredients having scientific-sounding names, it is often difficult to know exactly what they are, much less whether or not they have been derived from animals.

If you can’t find a hand sanitiser specifically labelled and marketed as being vegan then the best option is to plump for hang gels that have very few ingredients. A simple, more natural product may, for instance, contain just ethanol and aloe vera and means you don’t need to be a chemist to understand the ingredient list!

There are some hand sanitisers that don’t include an alcohol and instead rely on plant extracts, such as tea tree oil or lavender oil, which possess some natural antiseptic qualities, but this will depend on the concentration and they may only be bacteriostatic (i.e. they inhibit the growth or reproduction of bacteria) rather than bactericidal (i.e. actually kills the bacteria).

If a product is not specifically labelled as antibacterial (and sold by a reputable source), then there is no guarantee it will be able to kill bacteria. On the plus side, something like pure tea tree oil is certainly vegan! How effective such products will be with regards the coronavirus is also open to debate, although for general usage such hand cleansers certainly have their benefits.

Is Hand Sanitiser Tested on Animals?

But there are some companies that would not test new products on animals and who would only use ingredients that are known to be safe (though this might be because they have been tested on animals in the past, albeit not by the company in question).

It is very difficult to ascertain whether or not a particular product has been tested on animals or indeed whether the company producing it engages in animal testing. One way is to contact the manufacturer directly to gain specific information about their practices in relation to animal testing. But perhaps a better option is to purchase only products that are specifically labelled as cruelty free (for instance those that display the Leaping Bunny logo, and hence have met the criteria of the Leaping Bunny Standard).

Thankfully, there are a number of hand sanitiser gels that are specifically labelled as being fine for vegans as they contain no animal products and they are also cruelty free (so have not been tested on animals).

How Does Antibacterial Hand Gel Work?

The purpose of hand gel is to kill bacteria, viruses and other microbes. Viruses, however, are not really considered to be ‘alive’ in the same way as plants, animals or even bacteria are. So, in relation to viruses (such as COVID-19) it is more accurate to say the gels (or the alcohol in them) denature their proteins, essentially dissolving their cell membranes and (in the case of COVID-19) their spike proteins, rendering them unable to reproduce (which they can do only when they invade the cell of a living organism) or effectively attach to target cells.

While it might appear counterintuitive, it is actually the case that higher concentrations of alcohol in hand sanitisers can be less effective than those at a slightly lower concentration (though still over 60%). This is because, according to an article published on the National Center for Biotechnology Information in February 2020, “higher concentrations are less potent because proteins are not denatured easily in the absence of water”. It suggests the optimal concentration range of alcohol in hand gels is from 60% to 85% (for ethanol-based gels, foams and sprays).

According to a study published in The Journal of Infectious Diseases, an alcohol concentration of 40% or more in a hand sanitiser was sufficient to “completely inactivate” severe acute respiratory syndrome-related coronavirus (SARSr-CoV).

While this study looked at SARSr-CoV rather than the severe acute respiratory syndrome-related coronavirus 2 (SARSr-CoV-2) that is the cause of the 2020 coronavirus pandemic, there are enough similarities between the two virus strains to be confident that similar effects would be found with COVID-19.

While alcohol-based hand gels or sprays are indeed effective at killing bacteria, when it comes to viruses (such as COVID-19), it is thought that simply washing your hands with standard soap and hot water could be even more effective.

In an article for the Guardian, Pall Thirdarson, a chemistry professor from the University of New South Wales, Sydney argues that “soap is better [than alcohol gel] because you only need a fairly small amount of soapy water, which, with rubbing, covers your entire hand easily,” and when using gel it is easier to miss areas of the hands.

Soap and water works in a similar way to alcohol-based hand sanitiser in that it denatures the proteins of COVID-19; specifically soap acts against viruses through the amphiphiles (fat-loving, water-loving compounds) contained in them which attract the lipids of the virus, causing them to detach from the skin, while also causing the structure of the virus to break down.

The jury is out on whether standard soap and water or alcohol-based hand gel is more effective in combating the COVID-19 virus when it has made its temporary home on your hands. But doing either (or both!) regularly is likely to greatly reduce your chances of allowing the virus to get into your respiratory tract (for example, by touching your mouth and transferring it) or from passing it to others. We go into more detail about how to ensure your soap doesn’t contain any animal products in our Is Soap Vegan? article.

For situations in which you do not have access to soap and water, alcohol-based hand gel can be a very effective way to kill (or render ineffective) any microbes that have pitched up on your hands. It has been shown to be effective at combating viruses, such as COVID-19, and thus can be a very effective mechanism to reduce the spread of such viruses, whether used in healthcare settings, schools or places of work.

There are a number of good vegan-friendly options available, as detailed above, and (as long as the shelves haven’t been emptied by the hoarders!) it is certainly worth keeping a bottle in your handbag or car for the times when cleanliness and hygiene are needed, but when the combination of soap and water is not available.