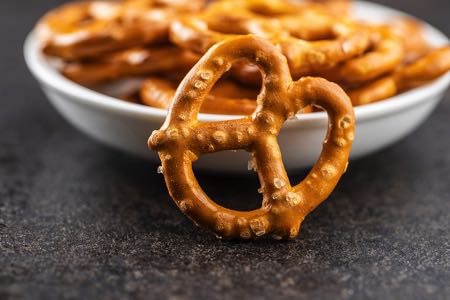 Pretzels are a popular bread or snack that come in two forms: hard (more of a snack) and soft (more of a bread but which is still great as a snack). Much-loved in America, Germany and other parts of Europe, we are here to ascertain whether or not they should be much-loved by vegans: in other words, are pretzels vegan?

Well, the good news is that lots of pretzels are vegan; but the bad news is that some are not. For vegans, that is both great, because pretzels are delicious and a cracking accompaniment to vegan beer, but also a little annoying as, like bread in general, it means they can’t simply be filed either as vegan friendly or as completely off limits.

So, what is a vegan to do? Well, thankfully we are here to help. In this article, we will explain why some pretzels are not vegan and what to look out for. We’ll also explain why many pretzels are vegan by looking a bit more closely at what a pretzel actually is. In fact, let’s start right there!

What Is a Pretzel? 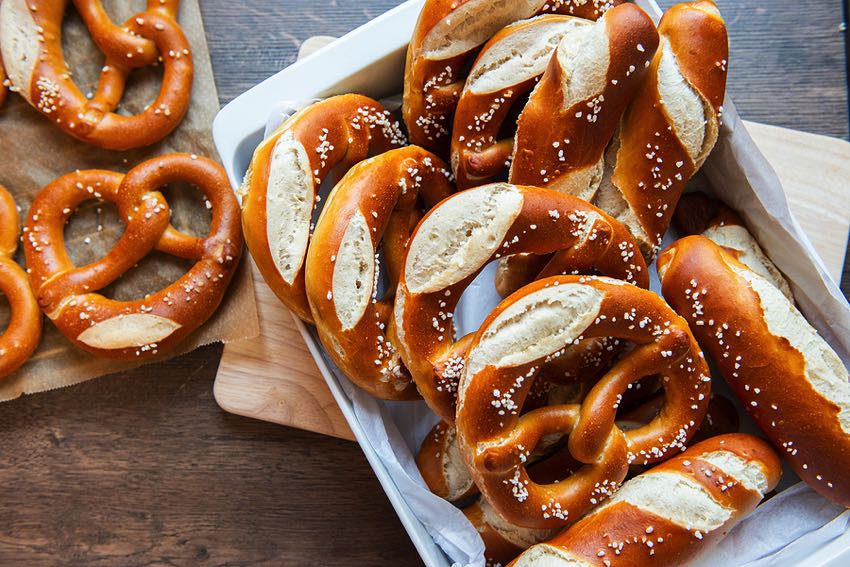 A pretzel is a bread that is famous for, and indeed named because of, its shape. These “little bracelets”, as the German word brezel means (from a Latin root), are generally considered to be German, although there are contrasting theories about both their origins and the etymology of the word.

From a vegan perspective, it matters not where they are from, or why and how they came to be called pretzels. What does matter, however, is what ingredients are in them and how they are made; and, of course, whether or not they are vegan. Pretzels are made from a fairly basic dough, made with soft wheat flour, yeast (and, yes, yeast is vegan), water, salt and sometimes sugar. Large crystals of salt are a traditional German topping although sesame or poppy seeds are also commonly used.

Essentially, that is all that is really needed and whilst there can be, in theory at least, concerns with some sugar and some flour, most people would happily conclude that pretzels are therefore plant based and vegan.

How Is a Pretzel Made?

To say that a pretzel is just a bread in a certain shape is not the whole truth. Aside from their shape, perhaps the other key characteristic of this tasty snack is the fact it has a very pronounced crust that is deep brown in colour. Most mass-produced, commercial pretzels achieve this crust using a little bit of science.

A hot solution of lye (alkaline sodium hydroxide), or alternatively sodium carbonate, is sprayed onto the dough. According to food bible, On Food and Cooking, by Harold McGee, “The heat and moisture combine to gelate the surface starch”. Any toppings, be that the traditional large salt crystals or some form of seed, are then applied. The pretzels are then baked at a high temperature for just a few minutes and this starchy gel hardens to form a nice crust, the alkaline lye encouraging browning and flavour development.

The end result is a perfectly formed vegan pretzel with all the desired characteristics: a dark brown, pronounced crust and the distinctive flavour that makes a pretzel a pretzel. The solution that is applied to the dough pre-baking has a further benefit of helping the salt (or seeds) stick to the finished product.

Given that pretzels can be, and often are, made from just a few plant-based ingredients, you might be wondering what the problem is. Well, whilst many commercial products use the process detailed above, or some variation of it, some smaller bakeries, or “homemade” pretzels you might eat in a bar or restaurant, achieve the desired pretzel characteristics by including animal-derived ingredients.

This isn’t strictly necessary, as a similar finish can be obtained by using a methodology that is comparable to that used for bagels. The dough can be allowed to rise a little before the pretzels are boiled briefly in a solution containing baking soda. A longer bake at a slightly lower temperature follows and the end result is both good and vegan friendly.

However, many recipes use neither of these vegan methods. Some instead include non-vegan ingredients to help create the desired crust, colour, flavour and texture, or indeed use the bagel-style process outlined above, as well as using animal-based items.

The most commonly used non-vegan ingredient you need to be aware of is egg. This is typically used as a wash, applied to the dough just before baking. The egg is used to help any topping stick and to help the pretzel gain the characteristic sheen, whilst it also adds a little in the way of flavour.

Butter is also sometimes included. This may be used in the dough itself to add a little richness, or alternatively as a wash, where it helps colour the pretzel, as well as conferring the same benefits as egg.

The other non-vegan ingredient that those on a plant-based diet should most be aware of is milk. Enriching doughs with milk, butter, or eggs tends to make the finished bread softer and can help keep it fresher for longer. Some pretzels include milk, especially soft pretzels, for these reasons, the milk replacing some or even all of the water in the dough. The higher sugar content may also help with browning and some bakers argue the milk gives a superior flavour too.

How to Check If Your Pretzel Is Vegan 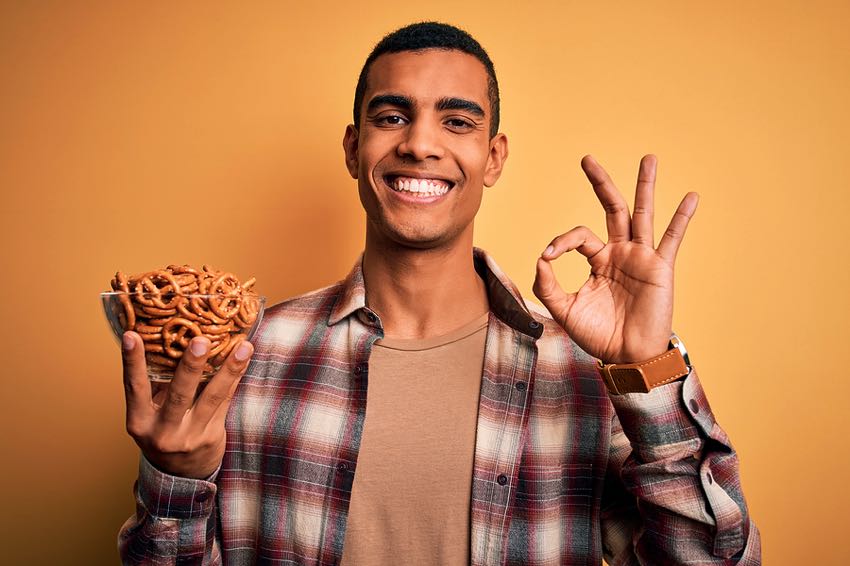 There is no way of knowing whether or not a pretzel is vegan simply by looking at it, unless perhaps you are Paul Hollywood, and even he would struggle. The same applies with tasting it, although, of course, it would be too late by then anyway!

As with many items we have discussed in the Is It Vegan? section of our site, when it comes to pretzels you will need to either ask, or check the ingredients. In general mass-produced, packed pretzels tend to be plant-based. None the less, checking for egg, butter and milk is prudent, as well as any derivatives of those including powdered versions of them.

If you buy a pretzel from a small shop, bakery, café or, our personal favourite, a Bavarian beer hall, you will need to ask. If you’re lucky enough to be holding a stein of fine German beer in Munich, Ist diese Brezel vegan? should do the trick!

The Difference Between Hard & Soft Pretzels

As we mentioned at the start of this piece, pretzels come in two main variants, soft and hard. In theory, these can be made in exactly the same way, from the same doughs, although there tends to be some minor production and ingredient differences.

Hard pretzels are often smaller and are a crunchy, salty snack that are usually eaten in the same way you might eat crisps or nuts. Hard pretzels are essentially just soft pretzels that have been either baked for a longer period at a lower temperature or have been allowed to dry out. They are typically sold in sealed bags and have a longer shelf life than soft pretzels due to their lower moisture content.

A soft pretzel is the original pretzel, with harder ones coming later. Whilst still crunchy thanks to that delicious crust, the softer version is very much a bread. It can be eaten as a standalone item, used to make a sandwich or is often accompanied by a dip, at least in America.

As a side note, if you do eat your pretzels in this latter way, be aware that lots of common dips are not vegan. Ones to watch out for include those containing honey, cheese, eggs (in mayonnaise-style dips) and dairy (such as sour cream-based options).

Soft pretzels are usually eaten fresh and do not last as long. They are generally served loose, as opposed to in a sealed, crisp-style bag. These distinctions are largely irrelevant to the question at hand though. Both hard and soft pretzels can, in theory, be either vegan or non-vegan and so it is best to check.

That said, because hard pretzels are far more likely to be mass produced, they are more likely to be naturally vegan. Indeed, most of the hard (also sometimes known as “crunchy”) pretzel brands we have seen are vegan so whilst we still recommend you check the packaging to make sure, you should be fine.

Pretzels come in two main forms, hard or soft, though they are essentially the same thing, just baked in slightly different ways. Hard or soft, commercially produced pretzels usually contain only plant-based ingredients and are simply a baked dough.

The problems arise where the dough is enriched or a non-vegan wash is used to create a harder, shinier crust. This is most likely to occur with soft pretzels bought from smaller bakers or cafés. If you want to make your own there are lots of non-vegan recipes out there but there are also plenty of excellent vegan ones too.

So, to conclude our conclusion, whilst most pretzels are vegan, some are not. If in doubt, check the ingredients for egg, butter or other dairy, or ask the baker, waiting staff or retailer.