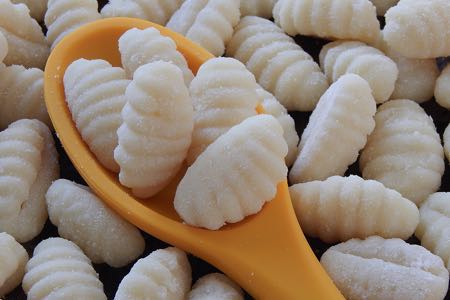 Gnocchi are often lumped (pun intended – gnocchi means lumps in Italian!) together with pasta, both on menus and in people’s minds. We have a separate feature on whether or not pasta is vegan, which leaves us free to answer one question and one question alone here: is gnocchi vegan?

Short answer: it varies (egg is a common ingredient whilst milk and cheese may also be used). For the longer answer, read on.

Whether or not a gnocco (singular) should be grouped under the pasta umbrella is a matter of debate. The cliché of Italians arguing passionately about food is 100% grounded in reality and it would not be too hard to find Italians arguing either side of the point. However, based on our entirely unscientific and frankly far from extensive research, we are going to say that gnocchi is not a type of pasta.

You might read and believe otherwise but the point is not one that should overly concern vegans, unless they are also Italian food historians, lexicographers, pedants or possibly all three. There are a number of reasons people might think gnocchi should be classified as pasta, which are discussed in more detail elsewhere. These can be summarised thus:

Given that we are filing them in our “not pasta” box, along with dinosaurs, wine and many, many other things, we will now refer to gnocchi as dumplings. They were first made in the 1300s as a fairly simple dumpling of flour and/or breadcrumbs. The potato is thought to have come to Italy in the 1500s, probably from Peru, via Spain.

Italian cooks began adding them to gnocchi to create an unusually light dumpling and it is the inclusion of potato that many would argue means gnocchi is definitely not a form of pasta. Almost all gnocchi recipes call for as little flour as possible, with the lighter, starchier potato being the main ingredient.

The flour provides a little bit of gluten to aid structure, whilst its moisture absorbing properties also help in this regard. Minimal kneading helps create a light dough, whilst the use of starchy, floury potatoes (Maris Pipers are great and very waxy varietals should be avoided) mean less flour is required and the gnocchi can be as soft and tender as possible.

The simplest gnocchi are just mashed potato (keep the mash as dry as possible) combined with around 20% (by weight) flour. And that’s it. The dough is typically shaped into a sausage and then cut into pieces of around 1-2cm, although it can also be cut or shaped in different ways.

The prepared gnocchi are then boiled gently for a couple of minutes in salted water until they rise to the top. Once drained they can be served with your favourite vegan sauce and Roberto is your padre’s fratello.

Gnocchi Can Be Vegan… But Often Isn’t

So, one might be thinking, surely gnocchi are vegan, given they contain just flour (which is usually vegan), potato and perhaps a little salt. Well, dumplings such as these would indeed be vegan but some recipes do call for the addition of non-vegan ingredients.

The most likely thing that might ruin – for a vegan – a perfectly good serving of gnocchi, is egg. Eggs are often used to help bind the dough. This is not necessary but some people like the extra richness it brings, whilst it also alters the texture, creating a slightly spongier finished product.

Some other gnocchi recipes may call for dairy to be added, usually milk, as with traditional Roman gnocchi which are made with semolina and are baked. The other dairy to be on the lookout for is cheese. Gnocchi can be made without potato, using a dough of ricotta or other similar cheese and flour. Such recipes may also include a little flour and they may be doubly non-vegan with egg often used to help bind the dough.

These sorts of non-vegan ingredients are usually very easy to identify on pre-made gnocchi. However, in order to make sure your “lumps” are definitely 100% vegan, the best bet is always going to be to either buy from a vegan supermarket or brand, opt for a product clearly labelled as vegan or make your own.

Or, Make Your Own!

The latter option really is incredibly easy. Making your own will be hugely satisfying and it also means you will not have to bother checking the ingredients list for eggs, milk, cheese or any other random and perhaps harder to spot non-vegan ingredient, E number or additive.

Look Out for the Sauce

Of course, making sure your gnocchi themselves are vegan is one thing. But it is also crucial that your lovely little pillows (sounds so much better than lumps!) are served in a vegan sauce.

Many traditional sauces include butter and cheese, whilst others may also use cream and yet others will be a ragú containing meat. Even when you think a sauce looks vegan, it may not be, with anchovies commonly used in Italian sauces, such as puttanesca (more traditionally served with spaghetti). The anchovies, which are a type of fish, often “melt” down and are used more as a seasoning, adding salty depth to the finished sauce and dish.

That may well be great for non-vegans but for vegans it means that a dish that can seem plant-based actually isn’t, with the anchovy not visible having melted into the sauce. As ever, if in doubt, ask.

Gnudi, which is pronounced either like nudie, or sometimes more like “knew-dee”, is a variation on gnocchi, although in a sense they are also a form of ravioli. They originate from Tuscany and the word is a Florentine reference to the fact they are essentially nude ravioli. That is to say, ravioli filling without the pasta shell.

Made from Cheese, So a Definite No Go

Much lighter than gnocchi, gnudi are considered a delicious and rich treat. Sadly, before any vegans get too carried away, no traditional versions of this Tuscan treasure are vegan because gnudi are made from cheese.

Gnudi can be as simple as mere balls of ricotta cheese, ricotta being a whey-based cheese that can be made from more or less any dairy milk. In fact, The Guardian’s gnudi masterclass, linked to above, states “Gnudi, in fact, should be all about the ricotta…”. That means they are very easy to make and probably rather tasty too but it also means they are irrefutably non-vegan.

Make Your Own Vegan Gnudi

Of course, there are many vegan cheeses, including vegan ricotta. What’s more, inventive vegans have created their own recipes for vegan ricotta, typically using cashew nuts. That means that it is absolutely possible to make passable vegan gnudi, so if you want some plant-based naked goodness why not give it a go?

In summary, gnocchi is often naturally vegan and it is perfectly possible, indeed some chefs would say desirable, to eschew animal products when making it. A simple dough of floury mashed potato, a pinch of salt and as little flour as you dare use in order to create a stable, binded gnocchi should produce a delicious product.

Nonetheless, many recipes use egg to aid the binding and to create a richer dish. Others may use cheese for similar reasons and to add flavour, whilst milk can also find its way into some gnocchi. With lots of sauces also containing butter, cheese, cream, meat or hidden anchovies, vegans should proceed with caution.

However, if they are careful, there is no reason why they diet can’t enjoy delicious vegan gnocchi and even plant-based gnudi. Buon appetito!