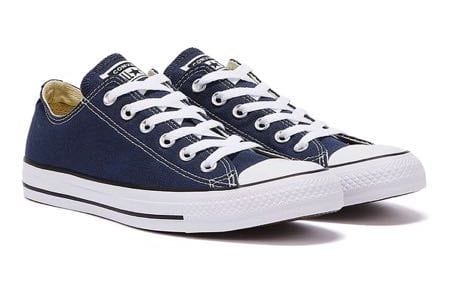 For those new to veganism, or those who are more focussed on the dietary aspect of veganism, the question, ‘Are Converse Vegan?’ may seem like a strange one. However, a full, holistic definition of veganism is about far more than just what people eat. It encompasses all parts of life and includes trying to avoid harming, killing or exploiting animals through any of our actions.

What we eat is a major part of that of course, but those fully committed to a plant-based lifestyle will also be interested in vegan cosmetics, fashion and clothing, and much more besides (anyone need vegan pest control or want to make sure their electricity is vegan?). Footwear is obviously a significant part of what we wear and so, in this context, the issue of whether or not Converse are vegan begins to make a lot more sense.

The short answer is: some Converse trainers are vegan, but many are not. We are happy to report, however, that the ultra popular canvas-based Chuck Taylor All Stars are indeed vegan, as they use a vegan-friendly glue and do not include any materials that derived from animals.

Is Converse a Vegan Brand?

Whilst some of the millions of shoes they sell are indeed suitable for vegans, they are certainly not a vegan brand. By that we mean they definitely produce some shoes and other products that are not suitable for vegans. Ignoring the other clothes and fashion items they make, some converse shoes are made of leather, or at least parts of them are.

There is also a suggestion that some use wool and other non-vegan items, so we can categorically state that Converse are not vegan per se… or that not all Converse products are vegan.

The History of Converse

Converse were founded well over 100 years ago, in 1908, by Marquis Mills Converse. Their home was Massachusetts, not too far from Boston, and the Converse Rubber Shoe Company began making rubber footwear designed for wearing during the winter months. Before long, they began making trainers, or sneakers, developing the famous high tops as part of their basketball range.

Unsurprisingly for a company founded when Edward VII was the King of England, Converse have gone through many changes over the years. During the Second World War, they made shoes for the US military and later enjoyed great success in the 1960s and 1970s. In the 70s, they began to face much more competition and slowly became less and less profitable, before repeatedly making annual losses.

In 2001, they filed for bankruptcy before Nike bought the brand for just over $300m. They remain owned by Nike to this day and Converse has expanded away from their core product, trainers, making clothes as well. Under Nike’s ownership Converse has thrived and has had sales of around the $2bn each year for much of the last decade or so.

According to the New York Times, they sell more than 270,000 pairs of “Chucks” (their famous Chuck Taylor All Star trainers, as worn by Elvis, Andy Warhol, James Dean and Kurt Cobain) a day! That’s a lot of shoes – about 100m pairs a year in fact!

Are Any Converse Trainers Vegan Friendly?

Vegans who are at the stricter end of the spectrum will eschew even vegan foods, drinks, household goods and fashion if the manufacturer is not wholly vegan. This is not always practicable or possible though and many other vegans are happy to use and eat items that are vegan even if the company that make them also produces non-vegan goods. Assuming you fall into that latter category, you might well want to know where there are any Converse trainers that are vegan.

Well, if you love the effortless cool of Converse and their famous star logo we have good news: there are indeed some Converse trainers that would fit most people’s idea of being vegan. As we detail in our dedicated piece on vegan fashion, animal-based glues render some clothes and many shoes non-vegan.

Avoiding leather, suede, fur, wool and other materials that come from animals is usually fairly straightforward. Shoes (and clothes) are almost always labelled with their constituents and, moreover, it is often obvious if a shoe is made of leather, for example. However, most shoes also use glue and trying to ascertain whether or not this is vegan is typically far more difficult.

Unless the shoe is clearly labelled and marketed as vegan, or comes from a vegan brand (such as Collection & Co or Koi Footwear), the safest option may be to assume that it is not suitable for vegans. Even if the main body of the shoe, including the sole, is clearly made from canvas, polyurethane “leather”, rubber or other vegan materials, such as cork, hemp, Gore-Tex or other synthetic fibres, there is a chance the glue used has been derived from animals.

Of course, rather than simply assume a particular shoe or garment is not vegan, a better (though potentially more time consuming) approach is to check with the retailer or manufacturer. And that is exactly what we did with Converse. We emailed them and we got a stock reply which you can see below:

All our glues are synthetic and non-animal based. All our canvas, Chuck Taylor All Stars styles are vegan friendly. Although the majority of our materials are animal-by-product free, the products could be manufactured in a facility which could contain animal-by-products. Because of this it is not possible for us to advertise our products as being truly Vegan.

This response is both helpful and just a little unhelpful. Whilst it clarifies the position with regards the adhesives, it does not tell us specifically which Converse trainers are and are not vegan, aside from the (canvas) Chuck Taylor All Stars. In fairness, the iconic “Chucks” are almost synonymous with “Converse” for many people and are the most popular trainer, although it should be noted that not all of these are canvas and therefore some will not be vegan.

Whilst level five vegans may be doubtful about the risk of what is essentially cross-contamination in the Converse factory, we feel this is not something most vegans will be bothered about. If you accept that Converse do make non-vegan shoes and clothes then this is part and parcel of the same thing. Moreover, there is clearly a big difference between cross-contamination in a food factory and in a shoe manufacturing plant.

In the former, a vegan might actually eat something derived from animals, whereas in the latter, the risk is simply that animal-derived particles might come into contact with the finished Converse product.

What Other Types of Converse Are Vegan?

Helpfully, Converse themselves have told us that their most iconic product, the canvas “Chucks”, also sometimes simply referred to as “Cons”, are vegan. But what other trainers do they make that are suitable for vegans? Well, first it is important to be aware that not all of the Chuck Taylor All Stars range are vegan.

Converse produce a seriously large number of different shoes and there are a huge number of trainers that fall under the “Chucks” umbrella. There are All Stars, high tops, low tops, Rivals, Seasonal, Future and many other varieties of this shoe and some are made with leather.

For example, perhaps unsurprisingly, the Leather Patchwork Chuck 70 High Top has leather (and suede) sections. The Utility All Terrain Chuck Taylor All Star High Top is another such trainer and there are many more. If you want classic Cons, you are best sticking to the ultra-classic, crème de la classic, classic of the classics canvas ones. These are vegan, whereas with other options you will need to check.

Unfortunately at the time of writing, the official UK Converse website does not allow you to filter by vegan options. Hopefully this is an option they will add soon and if you are a Cons-loving vegan it may be worth asking customer service if this is something they could do.

If you are interested in other shoes within the range, then we believe the following to be good vegan options. Note that this is based on the fact that Converse have told us all of their glue is vegan friendly and our assessment of the shoes. All of this is subject to change and, moreover, to be 100% sure you should probably ask Converse directly. Lastly, this is far from a complete list – Converse really do make a lot of different products!

Some Converse Are Vegan, Some Are Not

As we have explained, this back-from-the-dead brand, now owned by Nike, make a huge number of different types of trainer (or sneakers, if you prefer). Whilst all use vegan glue, some are made from, at least partly, leather, suede and other non-vegan materials. The classic canvas Cons are indeed vegan though, as are many others.

If you are after a pair of iconic canvas Chucks, you’re good to go, otherwise you’ll need to check the labelling to see what fabric is used. If in doubt, email, Tweet or call Converse, or ask the retailer.