Nutella is a hugely popular chocolate spread in the UK and indeed worldwide. The hazelnut-based and sweetened favourite is quite versatile and can be used in a whole range of sweet treats. Whether you like it in cake, muffins, or brownies, or on toast, crepes or croissants, the only question that really matters for those following a plant-based diet is: is Nutella vegan?

In our Is It Vegan? section of the site we look at a wide range of foods and products. With the vast majority of them, including pasta and chocolate, there is no simple answer and we have to include various ifs, buts and caveats. Thankfully, however, when it comes to Nutella we can give a simple, one-word answer. That’s the good news though and the bad news is that unfortunately for vegans, Nutella is not vegan. 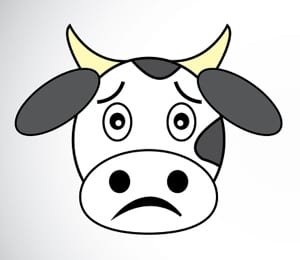 We’ll consider other reasons why you might not want to eat Nutella further on in this piece but for now we’ll get straight to the point and explain why it isn’t vegan. Moo. That was a clue. And, milk is the answer. Milk most certainly isn’t vegan and is one of the seven ingredients Nutella’s makers (Italian company Ferrero, of ‘Rocher’ fame) list as going into the popular spread.

It is actually milk powder that is used but the starting point is the same, milk, and therefore, from a vegan perspective, the cause of bovine suffering. The milk content of Nutella means that whilst vegetarians may choose to consume it, vegans cannot.

As mentioned, Ferrero like to trumpet that Nutella contains just seven ingredients. In actual fact, the precise formulation of the spread varies slightly from country to country but essentially it is made from the following:

Milk is the obvious non-vegan ingredient so, in truth, whatever else goes into Nutella is in some way is irrelevant. However, the fact that our Is It Vegan? hub has specific articles on sugar and palm oil should ring alarm bells too. However, it isn’t just those items that could be issues for vegans.

You can read more about sugar’s vegan credentials in the article highlighted above. Most people might, quite reasonably, assume that given sugar comes from a plant it is 100% vegan. The problems can sometimes come in the way refined sugar is processed though.

Bone char, derived from the bones of animals, is sometimes used to remove impurities from sugar to create a whiter, brighter product. Increasingly in modern times this isn’t the case but with many processed products, such as Nutella, finding out whether or not bone char has been used is very difficult. If an item contains sugar, those following a plant-based diet very strictly should contact the manufacturer to make sure bone char hasn’t been used unless the food or drink is certified as vegan.

Of course, aside from whether or not the sugar is vegan, it is still a source of empty calories. A vegan diet can be very healthy but not if it contains lots of sugar. Even vegan-certified sugar contains a lot of calories but no real nutrients. As such, high-sugar items, such as Nutella, and other vegan chocolate spreads should be eaten in moderation.

Palm oil is certified as vegan and, again, that might be what you would expect given it comes from a plant. However, there are a number of ethical issues surrounding it and many vegans choose not to use palm oil or products containing it. With around 50% of supermarket products containing palm oil, that is easier said than done but Nutella is certainly one product that can be easily avoided.

Check out our article on palm oil for information on the ethical problems it raises, but in short, the deforestation its farming necessitates is very harmful to the environment. More importantly for many vegans, the habitat loss this causes contributes to the possible extinction of several species.

In addition to the environmental issues palm oil production raises, like sugar, it is very high in calories and very low in nutrients. Sugar and oil are the leading two ingredients in Nutella and that combination of high sugar and high fat has been linked to a range of health issues. Much as Nutella might like to portray itself as a wholesome food, the reality is that it is high in calories and provides little in the way of vitamins, minerals or fibre.

Lecithin features heavily around the site, the reason being that it was initially isolated from egg yolk, its name coming from the ancient Greek for egg yolk. Many products contain lecithin for its properties as an emulsifier. Increasingly ingredient lists will detail the source of the lecithin and this is helpful for vegans.

Whilst lecithin can be made from eggs and other animal products it can also be derived from soy and other plants. Milk means vegans cannot eat Nutella but the lecithin used by Ferrero is derived from either soy or sunflower seeds.

Much chocolate isn’t vegan but usually it is milk that is to blame, with honey, butter, cream, lecithin and other additives also frequent non-vegan ingredients. Cocoa is 100% vegan but its connection with chocolate can sometimes confuse people.

In conclusion, we reiterate – Nutella is not vegan. In different countries you may encounter different formulations of the spread but all contain milk. That means even ignoring any other concerns, Nutella will never be vegan. Nutella offers their flagship spread but all other Nutella-based products are of course also non-vegan. That means any Nutella brownies, muffins or cupcakes are also not vegan.

So, we’ve had the bad news but fans of chocolate spread need not be too upset because thankfully there are some good vegan alternatives. Nutella is essentially a form of gianduja, an Italian chocolate and hazelnut spread.

There are many rivals and alternatives to Nutella that have a similar taste and nowadays there an increasing number that are suitable for vegans. Your local health food store should stock at least one of these whilst you may even find them in larger supermarkets.

If you’re struggling to find a suitable spreads you can even make your own. Our favourite recipe uses hazelnuts (of course), maple syrup, dark chocolate, a little coconut oil, hazelnut milk, vanilla extract and a little salt to taste.

Roast the nuts in a dry oven and then use a food processor to blitz them down to a creamy paste. Take your time with this, scraping down any big bits that aren’t getting blended, as creating a smooth paste is key to getting the right texture. Then just add the melted chocolate and all the other ingredients and blend again and away you go – vegan “Nutella” with no palm oil and no animal cruelty.